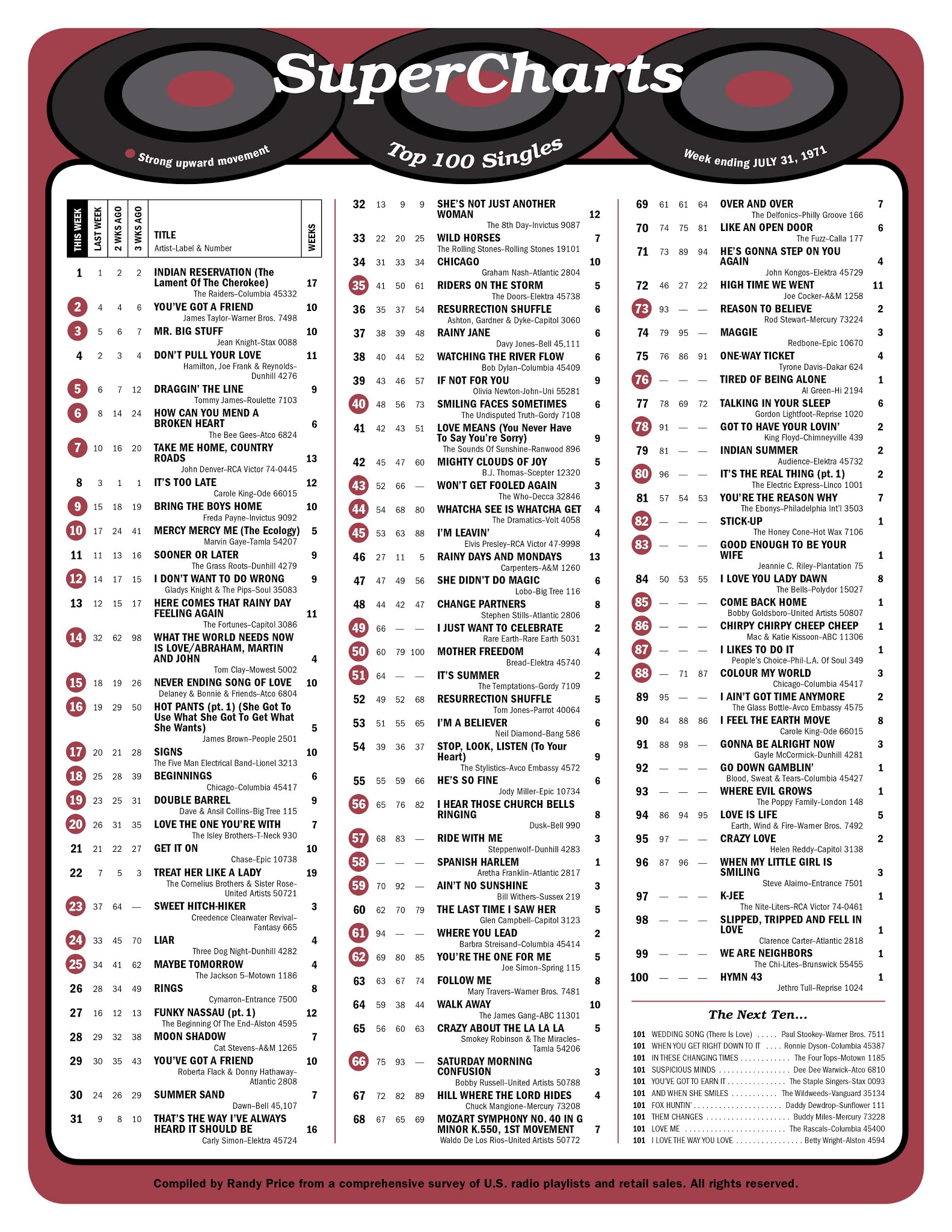 Although it topped all three major charts, "Indian Reservation" only stayed at #1 for a single week in both Billboard and Cash Box.  The Super Charts, however, are a conglomeration of points accumulated in all three major trade publications ... and so it remains in the top spot for a second week here.  (It held the #1 spot this week in Record World, and even went on to register a THIRD week at the top of that chart ... meanwhile, Billboard's and Cash Box's #1 hits "split the vote," so to speak, thus allowing The Raiders to earn enough points between all three trades to hang on for a second week here on our Super Chart.  (For the record, this week's #2 hit,  James Taylor's "You've Got A Friend" never hit the top in Record World, although it made it that far in both Billboard and Cash Box ... and "Don't  Pull Your Love," a #1 Hit in Cash Box only, comes in at #4 on this week's Super Chart.)

"Spanish Harlem" by Aretha Franklin is this week's top debut ... it premiers at #58 ... but was never really one of my favorites.  (I was clearly in the minority here on this one, as this song would go all the way to #1 in both Cash Box and Record World six weeks later.)

"Tired Of Being Alone," the only Al Green song that I ever really liked, premiers at #76, so it makes my PLAYING FAVORITES list this week.

And, simply because they've become "Forgotten Hits" over the years, I've also got to cast votes for "Go Down Gamblin'" by Blood, Sweat and Tears and "Chirpy Chirpy Cheep Cheep" by Mac and Katie Kissoon.  (Unlike Chicago's hit "Colour My World, which is back on the chart this week at #88, this one didn't get NEARLY as many wedding plays.)

July 26th – Apollo 15 (carrying astronauts David Scott, Alfred Worden and James Irwin) is launched … it will land on the moon on July 30th.

Also on this date, Apollo 15 lands on the moon (see above)

July 31st – Apollo 15 Astronauts David Scott and James Irwin become the first to ride in a lunar rover, the day after landing on the moon.  (See above ... and above)
Posted by Kent Kotal at 6:00 AM