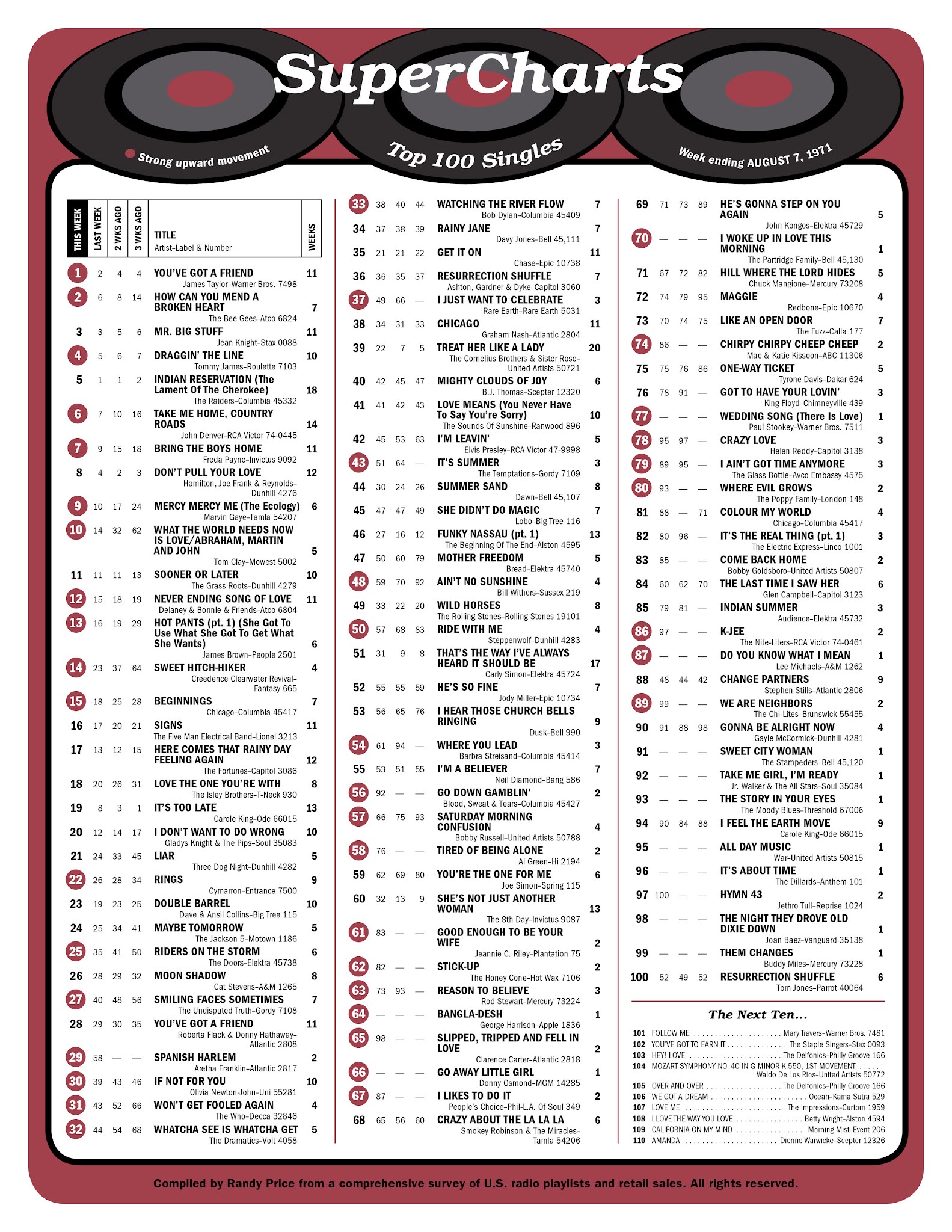 It's no big surprise really to see that James Taylor's version of the Carole King song "You've Got A Friend" has made it to the top of the charts this week.  This always seemed to be the song's natural destination.

Meanwhile, The Bee Gees slide into the #2 spot (up from #6) with their latest comeback hit, "How Can You Mend A Broken Heart."  (My guess is that this one will also top the chart in the next week or two.)

And Dee Jay Tom Clay's mostly spoken word record "What The World Needs Now Is Love / Abraham, Martin And John" finally makes The Top Ten this week.  (Look at this track record ... in the past four weeks, the song has moved from #62 to #32 to #14 to #10!)

Jumping ten spots this week is "Riders On The Storm" by The Doors.  "Smiling Faces Sometimes" by The Undisputed Truth also makes a big leap of 13 places (from #40 to #27) .... and Aretha Franklin's latest, "Spanish Harlem," which debuted at #58 last week, jumps an incredible 29 spots to #29.

This week's top debut belongs to George Harrison as "Bangla Desh" premiers at #64.  While not one of my favorite George Harrisongs (or all that great a song for that matter), the song was key in putting together the Benefit Concert for Bangla Desh held this week in New York City.  (Look for a double whammy of coverage on this Sunday and Monday.)

One of the latest teen idols, Donny Osmond, debuts at #66 with his remake of the Steve Lawrence #1 Hit "Go Away Little Girl."  Fellow heart-throb David Cassidy is back on the charts this week, too, as "I Woke Up In Love This Morning" premiers at #70 this week for The Partridge Family.  (I actually don't mind that one.)


Paul Stookey (of Peter, Paul and Mary) has his first solo hit as "Wedding Song" debuts at #77.  And I have always loved the Lee Michaels track "Do You Know What I Mean."  It's new this week at #87.  (The deejays used to LOVE to insert all kinds of weird sounds during the quick pause near the end of the record ... it was always fun to hear what they would come up with next ... everything from farm animal noises to loud crashes!)


And we're not done yet ... MORE great music makes its first appearance on this week's chart as "Sweet City Woman" by The Stampeeders premiers at #91, "The Story In Your Eyes" bows at #93 for The Moody Blues, "All Day Music" premiers at #95 for War and Joan Baez is about to have her first real pop hit as her version of The Band's "The Night They Drove Old Dixie Down" debuts at #98.

This Week in 1971:
August 1st – The Concert For Bangla Desh, organized by George Harrison to raise funds for a country besieged by war and famine, is staged at New York’s Madison Square Garden.  Two shows are performed, featuring an all-star line-up of friends of the ex-Beatle who, ironically, was the most vocal of the four mop-tops about never touring again after all the chaos they encountered back in 1966.

Joining George on stage were Ravi Shankar, Ringo Starr, Eric Clapton, Leon Russell, Bob Dylan, Billy Preston, Badfinger and more.  The concept worked (and launched similar rock and roll music fund-raising events that continue to run today.)  When all was said and done, sales of the triple album, movie box office receipts and, eventually, home video sales, along with donations from all over the world, helped to raise over eleven million dollars for the cause. 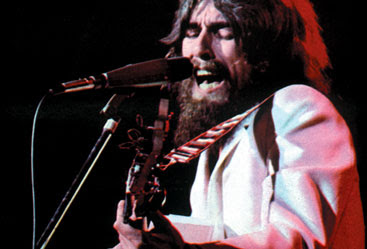 August 3rd – Big day for ex-Beatles today!  (A pretty big week, actually, when you consider George’s Concert For Bangla Desh event a couple of days ago!)

First up, Ringo Starr receives a Gold Record for his hit “It Don’t Come Easy,” a record that topped both the Cash Box and the Record World Pop Singles Chart … but only went to #4 in Billboard.

Meanwhile, Paul McCartney today announced the formation of a brand new band, to be called Wings, which will include his wife Linda on keyboards, former Moody Blues lead vocalist Denny Laine on guitar and Denny Seiwell, a session drummer who worked with McCartney on his “Ram” album.

August 6th – A lunar eclipse, lasting 1 hour, 40 minutes and 4 seconds is observed.  (I wonder what that would have looked like from the perspective on the moon, which is where our Apollo 15 astronauts were several days before.)

August 7th – Apollo 15 returns to earth  (They probably stuck around an extra day to see the eclipse.)
Posted by Kent Kotal at 6:00 AM