The Real Story Behind the Henry Gross Hit "Shannon"

I recently received an email from FH List Regular Wild Bill Cody regarding the beautiful Henry Gross ballad "Shannon".
Wild Bill has raised numerous Red Irish Setters over the years ... (some of you may remember when he and his three dogs spent the better part of a couple of days and nights broadcasting at his massively snowed-in Colorado radio station a few years back!) ... and he has a genuine love of these animals. (In fact, a photo of one of Bill's dogs is included in this posting!) Unfortunately, the truth is that only a small part of that story that he sent us is true ... which just goes to show you again how "history" sometimes gets distorted over time.
But, since Henry Gross has been a Forgotten Hits List Member for years now ... and since we just recently featured the real story behind the song "Shannon" a few weeks back in one of our Forgotten Hits Fridays features ... and since we're in the process of "cleaning up" our blog page postings right now ... and since Wild Bill is a REALLY good guy ... and since we're all about getting "The Most Accurate Truth" out there ... we'll run it again one more time, in an effort to keep the real story straight.

First, here's a copy of Bill's email:
Here's a great song from our friend Henry Gross about a Big Red Irish Setter named Shannon. The story goes that back in the day when Beach Boy Brian Wilson was bedridden with depression, NOTHING could get him out of his bedroom. His family and friends after time were befuddled, fit to be tied and had no idea how to help their friend and brother. Finally, a family friend came by and gave Brian a little Irish Setter Puppy that Brian named Shannon.
Well guess what? Shannon's charisma and love got Brian out of bed, and not only out of bed but he was actually active. In fact, Brian and Shannon romped on the beaches of Southern California daily for months. Brian and Shannon would play in the surf., finally Brian's life was coming back together and happiness surrounded him with Shannon's love. Until one horrible day when Shannon was carried out to sea and never to be seen again. Brian's heart was broken and he was crushed. Needless to say, Beach Boy Brian Wilson was bedridden again.
This is a beautiful song by Henry Gross, if you listen to the lyrics, you can picture Brian and Shannon playing in the surf.
As you know, I've had Big Red Irish Setters for nearly 34 years, and like Brian Wilson, they have helped me keep my sanity! Attached is a picture of my Irish Setter Bluey running at warp speed!
Happy New Year and God Bless,
Wild Bill
http://www.youtube.com/watch?v=vBMZIILmk1s
http://www.youtube.com/watch?v=R5Wpn3dFrEs&feature=related
Click here: YouTube - Henry Gross - Shannon (1976) (((Stereo))) 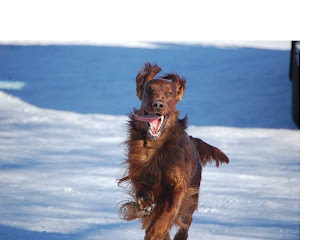 And now, a '60's FLASHBACK to a short snippet from our original interview with Henry Gross (from 2002) as well as the REAL Story Behind The Song "Shannon", as told in Henry's own words on his website:

'60's FLASHBACK: Henry Gross started his career as the original lead guitarist in the camp '50's group Sha Na Na back in the late 1960's. (Performing at Woodstock just had to be one of the career highlights for this guy!!!) He started singing as a solo act in the early '70's and had his biggest hit in 1976 when Shannon, a song written about the death of Beach Boy Carl Wilson's Irish Setter, went all the way to #5 on the National Charts. (It was a #2 smash here in Chi-Town.) In fact, he managed to come up with a very Beach Boys-sounding record (and spent a fair amount of time touring with the band.)

FORGOTTEN HITS: The song that you are most famous for here in The States has got to be "Shannon" ... it's a beautiful tune and your website explains again what inspired you to write it. Once you knew that you were dedicating this song to Carl Wilson of The Beach Boys, did that help dictate the arrangement? The vocals are beautiful and I'm sure many folks at the time thought that perhaps The Beach Boys were actually singing on the record!

HENRY GROSS: I wrote the song without conscious effort to sound like anything. I more or less channeled it while thinking about a visit to Carl's Beverly Hills home I'd just had. I was always a big "Beach Boys" fan and I guess subconsciously I wrote in in their style. It took about ten minutes to write with almost no changes afterwards. One of those "meant to be's" I guess!

The Story of "Shannon": When I was twenty-one years old a wonderful girl came into my life by the name of Kathy Reinmann. As if having her in my life as a friend, a wife and a friend again for the next twenty three years, until she died of lung cancer August 24, 1995, was not enough, she brought along with her into my heart her two year old Irish Setter, Shannon. She was an uncannily human dog whose ability to manipulate her human counterparts cannot be understated. I was touring around the country quite a lot in 1975 promoting an album called HENRY GROSS, the one with the yellow cover on A&M Records. I had the pleasure of doing long strings of dates with a group whose music always inspired me, The Beach Boys. Carl Wilson, arguably the finest solo voice in the group, was warm and welcoming from the very first show I played with them on a freezing cold day at the University of New Hampshire. After getting to know each other we realized we shared a love for much of the same music and a passion for fine vintage guitars. On a break from touring, while I was in Los Angeles, Carl invited me to his house to spend a day talking guitars, cars and rock & roll. While he was preparing lunch his two Alaskan husky dogs reached up on the counter and inhaled our food. I told Carl, while admiring the military perfection of the raid executed by his huskies, that I had an Irish Setter at home named Shannon. He was quite moved as he told me that he had an Irish Setter named Shannon that had been killed only recently when hit by a car. We spent the rest of the day jamming and driving around Carl's world which as a friend and to be honest a Beach Boy's fanatic was a thrill. When I returned to New York City, where I lived, I began work on my second A&M album, PLUG ME INTO SOMETHING. A few weeks later just as we were about to master the finished album I was sitting on my bed with Shannon strumming my guitar trying to write a song when I was disturbed by the loud bass sounds from the Latin music blasting from the apartment above me. Rather than complain I made an amazing discovery. If I tried to play records of my own choice I could drown out the intrusive bass sounds but was unable to concentrate. But I found that when I played an environments record called "The Ultimate Seashore" I could drown out the bass and have a pleasing and relaxing background sound that didn't interfere with my writing. In a matter of minutes with the ocean sounds guiding me, and my 1964 Gibson Hummingbird acoustic in my hands, my thoughts drifted to Carl, The Beach Boys and with a glance at my girl Shannon, the indescribable sadness that losing such a beloved partner in life must be. The song seemed to write itself taking no more than ten minutes and with almost no cross outs on the paper. I made a tape of it on my giant Sony cassette recorder and sent it off to Carl. I was hoping to stop the presses and record it for PLUG ME INTO SOMETHING which Carl had already sung on, adding background vocals to the opening song, ONE MORE TOMORROW, but it was too late. I had to wait for the next album to record it. I always wished I could have had Carl sing backgrounds on SHANNON but conflicting schedules dictated it wasn't meant to be. I believed after it was recorded for my RELEASE album, that it was destined to be a hit and lobbied hard for it to be the first single. You see, the man upstairs who had played the loud Latin music, beginning the entire chain of events, came down when he heard me playing mixes over and over to decide which I liked. However, rather than hearing the expected complaints, he said he loved the sound of the record and wanted to know where he could buy a copy. I reasoned if a salsa music fan who spoke little English loved the record through the ceiling, Shannon, Kathy and I had a hit on our hands. Fortunately, history and lady luck proved me right. And that is the true story of the song SHANNON.

It's still very difficult for me to recall that time as it seems like yesterday, the pain of the loss never having faded one iota! I can best refer you to a song on my "Foreverland" CD called "Heaven". I wrote this song about Kathy and I don't believe I could ever verbalize my feelings any better. Henry

HEAVEN SEEMS SO FAR AWAY

Wow! The story I told is the story that I heard years and years ago ... and I could have sworn that was the story ... and I've told it on the air for years that way before playing the song. It was really interesting to hear Henry's corrections ... and I've learned something new. (Oh well, you can't be right 100% of the time!) Wild Bill

No problem, Bill ... that's what we're here for!!! (lol) Hopefully a few jocks on the list will tell the story correctly this week ... and feature this GREAT Henry Gross track on their programs!