Here are a couple of responses ... and CORRECTIONS ... we received after our Bobby Darin piece ran the other day:

re: BOBBY DARIN:
>>>Terry Melcher would write two Top 40 Hits for The Rip Chords in 1964 ("Hey Little Cobra", #4, and "Three Window Coupe, #28) while under Darin's publishing umbrella. (kk)
Hey Kent ...
A slight correction on a line printed in your fine piece on the great Bobby Darin ... Although Terry Melcher may have had a hand in contributing to the writing of these songs, he is not credited with writing them.
"Hey Little Cobra" is credited to Carol Connors and her brother Marshall ... and "Three Window Coupe" is credited to Jan Berry and Roger Christian. Jan & Dean also recorded "Three Window Coupe".
Terry Melcher and Bruce Johnston were the amazing producers of these records and also sang most of the parts heard ... with Terry singing lead on both tracks. My info comes from Richie Rotkin ... but also, in the process of re-recording these songs for our new CD on Spectra Records ("The Best Of The Rip Chords ... Today"), that's also the info given by the Harry Fox Agency for the licensing of these songs for the new CD.
Have a rockin' week everyone!
Mitch Schecter / The Rip Chords
My bad! You are correct ... Melcher did NOT write these songs ... he PRODUCED the tracks for Trinity Music (and handled the lead vocals on both of these cuts as well.) Under the Trinity Music publishing umbrella, Darin also started "TM Music", which took production credit for a number of big hits between 1963 and 1966, including all of the ones we mentioned in our original posting ("Under The Boardwalk", "I've Got Sand In My Shoes", "The Shoop Shoop Song", "Good Lovin'" and Bobby's hits "18 Yellow Roses" and "You're The Reason I'm Living") as well as Wayne Newton's signature tune "Danke Schoen", a song that was SUPPOSED to be recorded by Bobby Darin ... but Darin gave the track away to his young protege' in the hopes of coming up with Wayne's first big hit.
(I got to meet Wayne a few years ago when they unveiled Bobby Darin's Star on the Walk Of Fame in front of The Flamingo Hotel in Las Vegas ... to this day, he thanks Bobby Darin every single day of his life for providing the break that launched his decades-long career.) 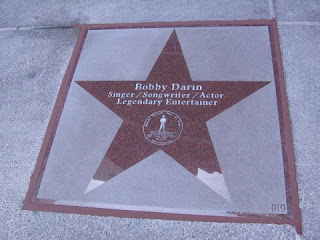 I found a couple of other errors in my 2005 piece ... "Under The Boardwalk" and "I've Got Sand In My Shoes" were actually written by Kenny Young and Artie Resnick, NOT by Rudy Clark. Clark wrote "The Shoop Shoop Song" for Betty Everett and then co-wrote "Good Lovin'" with Resnick, a #1 Hit for The Young Rascals.

Going back to Terry Melcher for a minute, Terry would go on to co-write a surfin' / hot rod tune with Bobby Darin himself called "Hot Rod USA" (which was also recorded by The Rip Chords) ... and then (with his Bruce And Terry partner Bruce Johnston) wrote (and sang background vocals on) "Comin' On Too Strong" for Wayne Newton and "Beach Girl" for Darin's fellow '50's teen idol (and "State Fair" co-star) Pat Boone!


Another interesting "beach" track from this era is the highly collectible "Beach Ball", written by new signee Roger McGuinn and Trinity Music staff writer Frank Gari. When Darin heard the song for the first time, he immediately booked studio time to cut a demo ... recruiting McGuinn, Gari, Kenny Young to cut the track with him. After the session, Bobby decided that this was too good to be "just a demo" ... so he released it as a single, dubbing the band The City Surfers. While it was never a hit, it has become a surfin' cult classic over the years ... and is extremely rare.


Perhaps the most IMPORTANT connection Terry Melcher made while working for Bobby Darin was that of a young songwriter by the name of Roger McGuinn. Two years later, Melcher would leave Trinity Music to produce McGuinn's hot new folk / rock group, The Byrds ... so THAT connection can be attributed to Bobby Darin, too! (kk)

KK,
I just read what you put on your web page about the work you have done on Bobby Darin. What a talent he was.
You mentioned that his LOVIN' YOU peaked at number 37 nationally. Would you believe that the flip side, AMY, made it to number one here in OKC? LOVIN' YOU was hardly played, believe me.
Also, I don't know how well you remember this record by Darin, but in 1967, also on Atlantic, he had the song, TALK TO THE ANIMALS from the movie or play, would you believe my mind has gone blank now.
What else is new? I am checking your website daily.
Good Luck
Larry

Ironically, it was a request Scott Shannon received for "Amy" that made me dig out all of this Bobby Darin stuff again in the first place! For whatever reason, the REAL Darin fans out there rank "Amy" (pretty much a non-hit) amongst their Bobby Darin favorites. (When I did my month-long series, we got RAVE reviews for this one ... and a track called "The Sweetheart Tree" ... songs that received virtually NO mass radio airplay yet quickly became fan favorites.) I also mentioned one of MY all-time favorite Bobby Darin B-Sides ... "Rainin'", the flipside of "If I Were A Carpenter". I TRULY believe that had this song been promoted properly, it would rank today as one of Bobby's biggest hits, right alongside "Mack The Knife" and "Beyond The Sea". It's an OUTSTANDING track that we've featured a few times now in Forgotten Hits. (Ironically, despite all the love and affection shown for "Amy", it didn't even place on our Favorite, Forgotten B-Sides Poll ... yet "Rainin'" did!) kk


By the way, all did not end well for Bobby Darin in regards to Trinity Music. First, he nearly lost the company in his divorce from Sandra Dee ... and then, even when he DID decide to sell, he ended up getting burned. Darin purchased the publishing house for about $500,000 in 1963. Five years later, he turned around and sold it for $1,300,000 ... not a bad return on his investment ... but then Bobby blew it ... he asked for $300,000 of that amount in cash to pay off the lawyers and officers of the company and invested the remaining million in
Commonwealth United Corporation, the company who bought his company.
He lost it ALL a few months later when their stock crashed and burned. (kk)