Quite often we do a feature here in Forgotten Hits called "Helping Out Our Readers" ... in fact, I'm hoping to pull another one together for you in time for posting tomorrow ... But THIS time around we've been pursuing a song that's actually been driving ME crazy ... ever since I first received this email:

I'm looking for a couple of songs. The first one is called "Crazy Mixed Up Song" and it was written by (Charles Grean / Joan Javits) ... I believe it was recorded by either Homer and Jethro or by Billy Cotton and His Band.
The lyrics go something like this:

'Twas midnight on the ocean, not a streetcar was in sight.
The sun was shining brightly in the middle of the night.
A barefoot boy with shoes on stood there sitting in the tree
And when he put his glasses on, he heard this melody:

Be kind to your web-footed friends
For a duck may be somebody's brother.
Be kind to the denizen of the swamp;
He's a dilly through and through.
[Alternate line: Where the weather's always damp]
You may think that this is the end,
But it isn't 'cause there's another chorus.

'Twas midnight on the ocean when the rain began to snow
He hurried to me slowly 'cause the time had come to go.
I said I'd wait forever if it didn't take too long;
And suddenly we harmonized this crazy, mixed-up song:

Be kind to your web-footed friends
For a duck may be somebody's brother.
Be kind to the denizen of the swamp;
He's a dilly through and through.
[Alternate line: Where the weather's always damp]
You may think that this is the end,
But it isn't 'cause there's another chorus.

'Twas midnight on the ocean on the day I married him.
I didn't know his name was Fred, that's why I called him Tim.

Be kind to your web-footed friends
For a duck may be somebody's brother.
Be kind to the denizen of the swamp;
He's a dilly through and through.
[Alternate line: Where the weather's always damp]
You may think that this is the end,
Well it is.

And don't forget "Wet Dream" by Kip Addotta.
I'm a BIG TOC fan.
Not sure if this is a forgotten "hit", but it is one I haven't heard in ages
(and for good reason, I'm sure).
Have fun!
Bobby T
Huntsville, AL
"Wet Dream" by Kip Addotta is a GREAT novelty tune ... VERY cleverly written and one of my favorites. (I know, I know ... there's something fishy about that song ... but I like it!)

And, since we're talking fish songs ... and it's Halloween this weekend ... here's another Forgotten Hits favorite that we started featuring a couple of years ago:

As for the other one, ("Crazy Mixed Up Song") I recognized it IMMEDIATELY as soon as I read your lyrics ... and the entire melody came back into my head ... yet despite listening to both the Homer and Jethro version and the Billy Cotton version (thanks to Tom Diehl, who sent me copies of BOTH), I didn't recognize EITHER of them as being the one I heard growing up as a kid.


A quick check of all the charts (both Pop and Country) didn't help ... because this record never charted by ANYBODY!!! So how the heck did I know it?!?!?

It HAD to be something that was played and / or sung around the house when I was a kid growing up ... but there's nobody left to ask!!!

Can ANYBODY tell me how it is that I might know this song ... virtually word for word?!?!?

It's literally driving me CRAZY!!!

I've never heard the song nor seen a copy of the 45, but there are two copies for sale cheap on this website: http://www.speedlimit45rpm.com/catalog/novelty/novelty_m-s.htm

Not only will I bet that you HAVE heard it before (without even realizing it) ... but that you'll be able to sing along before it's even over ... and then scratch your head and wonder out loud "Where The Hell Did THAT Come From?!?!?"

Give a listen and see what you think. (kk)

Interesting ... the guy knows the song and has located a few versions, but is looking for a specific version. Usually, people who write are just wanting the song itself.
Jerry Osborne
And now I need to hear it, too! Hoping somebody will come up with a copy! (kk)

Then I found this:
Click here: Music You (Possibly) Won't Hear Anyplace Else: Novel Novelties--Crazy Mixed Up Song, The Disorderly Orderly, Dragn ... 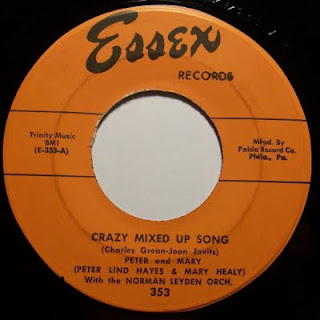 Maybe THIS is the one I remembered?!?!?

Unfortunately the link to play this tune has since been disabled ... and I couldn't find an email address to contact Lee Hartsfeld ... so then I got to thinking,
"Hey, maybe The Three Stooges or somebody like that cut this song on one of my old kiddie records from way back when!!!"

I couldn't stand it any longer ... and finally had to consult my Doctor ...

Regarding "Crazy Mixed-Up Song" ... I recently played the ca. 1953 record by Peter Lind Hayes & Mary Healy on my show.
I recall that Homer & Jethro also recorded it, as did other artists ... and I think the song was in summer-camp tradition before Grean & Javits wrote it down, though I have no proof of that.
At http://dmdb.org/ there is a searchable database of virtually all the songs I've played on the show through the years, indexed by title and artist.
Stay deeeeeeeeeeeeemented!
- Dr Demento

And, thanks to the good doctor, we now have this version to share with you, too ... STILL not the one I remember hearing growing up unfortunately ... which makes me think more and more that maybe The Three Stooges did this on one of the old kiddie records I had ...
but we've certainly got a wide batch of "crazy" to share with you today!!! (kk)