re: IT'S OUR ANNUAL LAST MINUTE CHRISTMAS DASH:
I didn't get these in time to include in our final Christmas posting ... but wanted to share these with you very quickly before we put this to bed once and for all 'til next year! (You'll find a few fun things to read here ... and it sure beats standing in the Return Lines at the Mall!!! lol) kk

Lest anyone think I'm a scrooge, I will confess to having the Phil Spector's Xmas album (only because it came as part of the Phil Spector boxed set) and a song called Punk Rock Christmas by a band called The Ravers, which appears on a Rhino records compilation which is where you'll also find the Hanukkah classic, Hanukkah Rocks and Walk On The Kosher Side, by Gefilte Joe & The Fish. Oh yeah and I do have If We Can Make It Through December, by Merle Haggard, which really isn't a Xmas song. However regardless of what I think about Christmas, which admittedly isn't much, I too wish all the best this Xmas to everyone in FH land.
Jack (Rock And Roll Never Forgets)
While you and Jersey John pretty much became known as our Resident Scrooges this year, that was more YOUR doing than mine!!! All that aside, I hope you BOTH still had a VERY Merry Christmas ... and let's make 2011 a better year for ALL of us! (kk)

Thanks, Kent, for including Matt Tyson and even the Facebook Christmas video.
Merry Christmas,
Phil
Hey, we got some GREAT stuff to share this year ... happy to do it! Merry Christmas to you and yours, too, Phil! (kk)

Kent,
It was great seeing Jeff's mention of the Goodyear Christmas albums. We have several of the Firestone and Goodyear LPs from the sixties and still enjoy them every year. The artists on these albums include numerous pop singers, opera singers, and even a few soft country singers from the fifties and early sixties.
Jim Reeves' plane went down near a heavily traveled road here in Nashville, and I think about him nearly every time I drive through that area.
David Lewis


Kent ...
Paul Simon has released this song for free.
It's off his "So Beautiful Or So What" album, available in the Spring.
Paul Simon’s “Getting Ready For Christmas Day” – WCBS-FM 101.1
I guess i must've been a good boy this year.
Santa brought me an "Elvis Mr. Potato Head."
Since a potato is dark skinned, Elvis looks black!
Frank B.
Elvis wasn't black?!?!?
Looks like we scooped WCBS-FM by about 3 1/2 weeks on this one ... Paul Simon's "Getting Ready For Christmas Day" was the VERY FIRST new Christmas song we featured this year in our Forgotten Hits Countdown To Christmas feature. (kk)

And, speaking of WCBS-FM (does Frank really talk about anything else?!?!?), I tuned in to listen to part of their Ho-Ho-Ho Top 101 Christmas Songs Countdown on Christmas Day ...
Kent ... You already know that Big Jay Sorenson has been filling in for the past week here at WCBS-FM in New York. I spent Christmas Eve with my family and Big Jay. He was counting down the "Ho-Ho Top 101 Christmas Hits." I really like him. The ultimate pro. Great sense of timing. I love his sense of humor. If it was up to me, I'd hire him full time instead of just as a fill-in. Big Jay gave us the Top 10 news stories of the year. He read off 10-9-8-7-6-5-4-3-2 (Drum Roll) and the #1 news story of the year is that "Big Jay Sorenson worked five days in a row at WCBS-FM." I guess you have to hear it instead of read it, for it to be funny.
Frank B.

Nope, it's still funny!!! BIG fan of Big Jay here, too ... and happy to see that he's been entertaining the folks over the long holiday weekend! WTG, Big Jay! (kk)

In case you missed it, the #1 Song was "A Holly Jolly Christmas" by Burl Ives. It's a catchy, happy-go-lucky tune, but I can't see it beating out "White Christmas", "The Christmas Song" or "Rockin' Around The Christmas Tree" for #1.
Frank B.

Nope, never heard #1 ... but that's consistent with The Top 20 Most-Played Christmas Songs List we sent out at the beginning of our series ... so no real big surprise there. I probably heard the Burl Ives tune about 30 times this holiday season ... and that was with turning OFF the All-Christmas Channel more often than not. Other big ones for me this year were "Feliz Navidad" by Jose Feliciano, "The Most Wonderful Time Of The Year" by Andy Williams and, for SOME odd reason, the Air Supply version of "Sleigh Ride"!!! Personally, I'm ready to put away the Christmas tunes till next year! (kk)

re: HOW ELVIS SPENT CHRISTMAS EVE:

Got this from Frank B. (by way of Ron Smith's oldiesmusic.com website) ... it comes from Kathy Westmoreland's website. (Kathy, of course, was one of The King's most famous back-up singers). She tells us how Elvis used to spend his Christmas Eve's when he was home in Graceland ...

We all know, of course, that Elvis was a philanthropist and humanitarian. The stories of his generosity are legendary. Yet here is a tidbit that I believe is a monumental testament to the true nature of this man. One that most people have never heard ... one that was told to me after he died.

He did not discuss the daily good deeds he did for others ... both friends and / or strangers. I was so fortunate to witness them on a daily basis. Yes ... daily ... whenever I was with him. This quite remarkable story was actually told to me by more than one policeman, and deputies at the sheriff's department in Memphis at different times. I never knew this because I was home for Christmas with my own family and I am still amazed. Christmas Eve was the night that Elvis chose to go make all his annual donations to the many charities he supported. But here is the story that runs chills up my spine and makes me tear up even as I type this.

On Christmas Eves ... when most of us spend that entire special evening with our families, anticipating the exchange of gifts ... Elvis left the house for a while and went to the jail. He visited every prisoner, no matter their race, gender, creed and no matter the severity of the alleged crime ... just human being to human being ... and talked with every single one. I was told by the officers he would ask each one why they were there and how he could help them. And help them he did ... in any way he could.

He took notes, planned what he would do for each and every one he could possibly do something for. How many of us would do this at any time? How many would do this on Christmas Eves? Of course in most of our religions and particularly Christianity, we are taught that Jesus told us to comfort those in need, feed the hungry, clothe the naked, heal the sick, shelter the homeless, etc.

"I was in prison and he visited me" is one that I venture to guess not many of us, even though we call ourselves Christian Believers, would ever do. He assisted them in any way possible ... from contacting their families to see if they needed "anything" (financial assistance while their loved one was in jail? Were their children alright? Their husbands or wives?), and making certain they would be assisted in every way once they served their time, made certain they had proper representation in the court by a decent attorney ... and so forth.

This man ... Elvis Presley ... not only believed what he was taught, but physically acted on those teachings. Most of us (including me) somehow decide this one instruction is just easy to ignore and / or better left "out" of our good deeds.

Myrna Smith, member of the Sweet Inspirations, died Friday (December 24) at a hospice near Los Angeles. She was 69. Myrna was was hospitalized in London for three weeks in March while part of a European "Elvis On Tour" concert after suffering pneumonia and a stroke that led to kidney failure. She was placed on dialysis upon returning to the U.S. The Sweet Inspirations were an outgrowth of the backup group, the Drinkard Sisters, whose membership included at once time Dionne and Dee Dee Warwick and Doris Troy. Cissy Houston replaced Dionne and Sylvia Shemwell replaced Doris as the group sang backup for Wilson Pickett, Aretha Franklin and on Van Morrison's "Brown Eyed Girl." Myrna, a former New Jersey schoolteacher, joined along with Estelle Brown in 1965 and the group themselves signed with Atlantic Records. From 1967 to 1979, the quartet charted eleven times, most notably with "Sweet Inspiration" (#18 - 1968). But they were best known as Elvis Presley's backup singers in concert from 1969 until his death in 1977. Sylvia preceded Myrna in death this past February.

'CHRISTMAS GREETINGS' from CHARLIE and JOAN GRACIE
Joan and I wanted to take a moment to wish all of you a Blessed and Festive
Christmas Season, as we commemorate and celebrate the true source of HOPE for our world. We wish you and yours a new year filled with good health and lots of love shared with dear family and friends!
As you may know, our son Charlie, Jr. oversees our websites and the many emails and photos you so kindly send all year through ... and he takes the time to share them all with us! Our heartfelt thanks to our friends in the U.S., the U.K. and throughout Europe for your continued devotion. We love and appreciate all of you!
Charlie & Joan 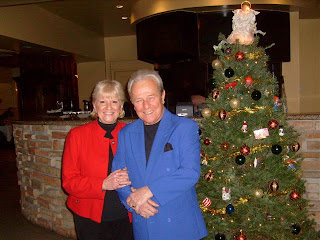 Pic: Charlie & Joan at Franco's Osteria (Philadelphia) on Dec.
22nd: WHAT-AM 1340's Christmas Party and Happy Hour where Charlie performed. Thanks to all who came out!

I don't think my last message ever made it through to you.
Here is a little gift for you ... my 5 year old daughter's first recording.
A Christmas song.
God bless.
Merry Christmas.
This'll make you smile.
Darren Dowler
Paul Revere and the Raiders

Nope, your original message never arrived ... because I surely would have run it! This is a GREAT little track that we're sharing with our readers today ... thanks so much for sending! (And I see that Paul Revere and the Raiders have already been booked into Chicago for NEXT YEAR'S Christmas Show ... can't wait to see it!!!) Thanks, Darren! (kk)

... And, speaking of Paul Revere and the Raiders, we also received THIS from the guys on Christmas Eve!!! 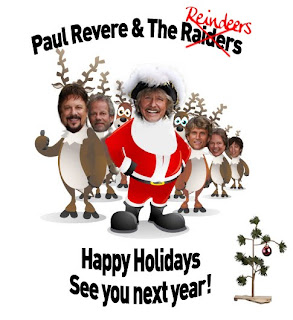 Kent!
You're too much!
Merry Christmas!!!!
Enjoyed all the Holiday stuff! Just great.
Thanks -
from - Furvus and The Fifth Estate

Kent,
I have really enjoyed your website ... you keep it interesting, informative, and fun all at the same time. it's definitely a favorite of mine.
On behalf of The Buckinghams, I hope you and your family have a very Merry Christmas, and a happy, healthy, and successful New Year.
Carl Giammarese
The Buckinghams