More Of Your Garage Bands Comments

The last batch of Garage Band Comments seem to be trickling in ... so we thought we'd wrap them up here once and for all.


re: THE McCOYS:
Do you know about the version of Hang On Sloopy that was not played on the radio? The radio play left out a verse. I have a copy of the verse attached. Maybe too racy or they shortened the song for radio play?
Bill
I've always thought that this was just an album version vs. a single version ... the single was punched up and edited for the old "under three minutes airplay" factor that was so predominate on the radio back then. Honestly I've always felt that this verse didn't fit ... you'll hear it every once in a while on an oldies station and it just sounds "wrong"!!!  (kk)


Kent,
I learned something today that I did not know. You mentioned that the McCoys took their name from the flip of the Ventures' 1960 hit WALK DON'T RUN. Something didn't quite seem right to me so I went and pulled my copy. The flip was a song called HOME. I did some research and apparently WALK DON'T RUN was issued twice with THE MCCOY on one record and HOME on the other, both records on Dolton (label #25). I do have a copy of a record they made in 1959 called the REAL MCCOY with a Walter Brennan sound alike on the record.
Larry
One of my earliest (and most-played) 45's was "Walk Don't Run" by The Ventures ... and "The McCoy" was DEFINITELY on the B-Side of my single 'cause I played the heck out of that one, too! The Whitburn book references both B-Sides, which happened once in a while. I'm not familiar at all with the "Real McCoy" track ... but the Walter Brennan tie-in is appropriate! Would love to hear it. (kk)

Hi Kent,
Rick Derringer produced Edgar Winter and played guitar in the White Trash, but the guitar player on his biggest hits was Ronnie Montrose. He was the guitarist on They Only Come Out At Night, which had Free Ride, Hangin' Around, and Frankenstein. He also was the touring guitar player for that album -- at least he was when I saw them. Rick produced that album, though, and I wouldn't be surprised if he played some guitar on it as well. He was also working some with Johnny at that time still I think -- either in production or touring or both. When the Next Edgar Winter group album, Shock Treatment, came out, Montrose was gone and Rick was the guitarist but still producing. The drummer in the Edgar Winter Group was Chuck Ruff and the bass player was Dan Hartman, who went on to have a few hits of his own. The Drummer on the White Trash albums was Bobby Ramirez and the bass player, at least on the live album Roadwork, was Randy Hobbs.
Bill
Derringer, of course, scored with his big solo hit "Rock And Roll Hoochie-Coo", a #15 Record in 1974.  Dan Hartman's biggest solo hit was another one of my favorites, "I Can Dream About You".  That one went to #6 in 1984, incredibly ten years after Derringer's big hit. (kk)

>>>Legend has it that the Steely Dan song "Rikki Don't Lose That Number" was written about none other than Rick Derringer!!! (kk)
I always thought that with that particular spelling, they were referring to a woman! Would be pretty creepy if it were in fact Mr Derringer!
-- BOB FRABLE
I dunno ... just something I heard ... and more than once, too!  (kk)
Then again, maybe we've been wrong all along ... 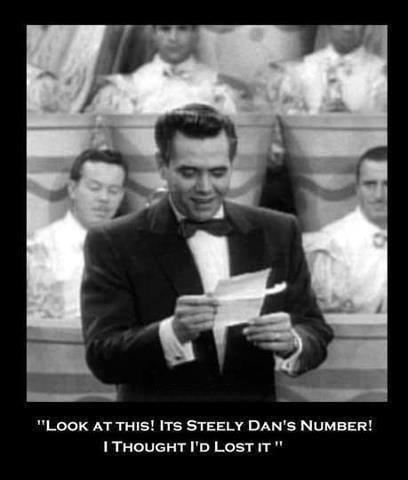 Thanks, Kent, for setting the record (so to speak) straight on The McCoys / Strangeloves. Great job!
Mike Dugo / 60sGarageBands.com
Well, we tried ... but not everybody got it ... and clearly not the guy who had the story all mixed up in the first place! We exchanged numerous emails afterwards to no avail ... he has evidently made up his own mind as to what the REAL story is and nothing I can say or do is going to change that. As far as he's concerned, The McCoys were a fabricated band who went out with faceless substitutes on the road and Rick Derringer simply dubbed his vocals and guitarwork on to tracks already laid down by other studio musicians. Whatever. All we can do is present The Most Accurate Truth we're famous for. As they say, you can lead a horse to water ... but you can't make him think.  (kk)

re: OTHER GARAGE BANDS COMMENTS:
Just a passing thought ... I saw on the site where someone made the comment that the phrase "garage band" was never used back then, and he was absolutely correct. Bands like the Music Machine, Count Five, The Standells, The Seeds, etc., were the ~original~ PUNK bands and THAT term was used in print at the time to refer to their style of music. So, yeah, bands like the New Colony Six may fit within the context of 'garage band', a band that probably started out together in one of the member's garages or basements, along with some of the other bands that were included in your top ten ... they would NEVER, IMHO, fall into being described as a 'PUNK' band ... angry, attitudinal, snarling, three chord, little wonders, that churned out stuff like 'Psychotic Reaction', 'Dirty Water', 'Talk Talk', 'Pushin' Too Hard', etc. There is a certain thread that ran through ALL of those songs that is lacking in anything that I ever heard by New Colony Six, for example. Where is the anger or attitude in 'I Will Always Think About You'? There is none. Great song, NOT punk.
Just my nickel's worth on the subject ;)
DocRock
That's because we (the masses) only know of The New Colony Six through their two Top 20 ballads ... but seriously, listen to some of the other tracks we put up there ... you just may be surprised by where they came from. (Some of us remember when Rod Stewart was a rebellious rocker called "Rod The Mod", wearing panty hose ... not the lounge singer he became re-recording soft rock standards from 60 years ago!!! And Phil Collins used to drum for a progressive art-rock band before he sang songs on the Disney animated "Tarzan" movie, too.) As we learned on Friday, the "garage band sound" is sometimes just a perception. The Strangeloves totally nailed the sound ... and scored three Top 40 Hits in the process ... when, in fact, they were fronted by three Jewish songwriters whose biggest claim to fame up to that point was having written the #1 Hit "My Boyfriend's Back" for The Angels! Typecasting aside, go back and listen to some of the early New Colony Six examples that we posted on the site ... and see if you don't agree that this material was light years away from the "I Will Always Think About You" and "Things I'd Like To Say" ballads that eventually gained them their greatest audience. (kk)

Kent --
I thought the Kingsmen were going to come in at #1, like a lot of people.
In my senior year at Lane Tech the school experimented with pop music in the lunchroom, and when "Louie Louie" came on it was practically a riot. That was the end of lunchroom music.
I learned something else recently: The melody to the Kingsmen's song "The Jolly Green Giant" wasn't original to the song, nor to them. In 1960, the Olympics charted a song called "Big Boy Pete" (Whitburn says it got up to #50) and sure enough, the melody was the same.
The Jolly Green Giant was a big cultural deal in our youth. The company gave away bazillions of free kites, and the giant was lampooned famously on Johnny Carson. ("Hey Green Giant, show us your niblets!") He taught a generation of Boomers how to hate vegetables.
-- Jeff Duntemann
Colorado Springs, Colorado 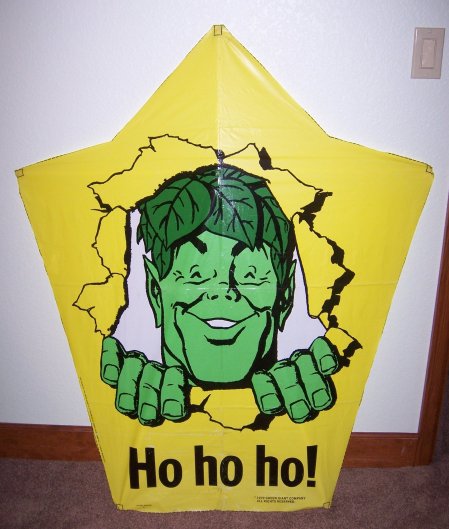 We'll "Ho Ho Ho" this one right into a Christmas Greeting! Thanks, Jeff! (kk)


>>>Michael L. Rabon, lead singer and writer for the hit 60's group, The Five Americans, has written a new book about these strange and exciting times called "High Strung."  We've already heard from several FH readers who ordered Mike's book ... and it seems to be playing to EXCELLENT reviews from just about everybody who's read it!  (kk)

I ordered the book through the Five Americans website upon a strong recommendation for the book from a friend of mine, and I couldn't put the book down -- I finished it in two days time and the entire time I was reading it, I felt like it would make a fantastic movie.
Tom Diehl
You'll find more rave reviews here:

Click here: Amazon.com: Customer Reviews: High Strung
Go ahead and add THIS one to my Christmas list, too!  (kk)


I'm ba-ack ... well, been back ... just finally something to say ...
Best garage band to make an appearance on 'EL MUNSTERS' ?
The STANDELLS !!!
http://www.youtube.com/watch?v=_iFpomw5sDo
-- RENFIELD
Classic! (Gotta put this up with our Beau Brummelstones clip as amongst my favorites from this series!) kk

I’ve really enjoyed counting down the top garage band tracks. Please let me know how to access the recent installments of the survey, particularly the first few days of the survey that I don’t recall receiving via email.
Best,
Justin
St. Paul MN
The series kicked off on November 26th ... just scroll or click back to this date and you can enjoy it in order from the beginning. We'll be posting The Top 50 soon ... and, hopefully, an audio recap, too ... Phil Nee of WRCO did a GREAT job of counting these down, throwing in a ton of "extras" and peppering the whole thing with some great interviews ... we're hoping to have an audio link up for you soon. This series has proven to be quite popular! (kk)

THANK YOU FOR THE GREAT WORK ON THE GARAGE BANDS. IT WAS WORTH WAITING FOR!
MIKE
Thanks, Mike ... and I can assure you that listening to it back in radio form is even MORE fun!  We're working to get you guys that link later this week ... I think you'll really enjoy it!  (kk)

Kent,
A great job on the Garage Band series. You have an incredible knowledge of, and tremendous enthusiasm for, our beloved oldies; not to mention unbelievable stamina. Hope you can have some well deserved downtime over the next few weeks.
Mike Ogilvie
Mississauga, ON, Canada
Posted by Kent Kotal at 6:23 AM