re:  I'VE NEVER BEEN GOOD AT NEW YEAR'S RESOLUTIONS:

Re: REMEMBERING MUSIC, 2012:
Great pop music with actual melodies made a HUGE comeback in 2012. Infectious, future pop classics are sure to include: Somebody That I Used To Know, Call Me Maybe, Lights, What Makes You Beautiful, Good Feeling, One More Night, Everybody Talks, Good Time, Moves Like Jagger, We Are Never Ever Getting Back Together, Someone Like You, Set Fire To The Rain, Domino, Stereo Hearts, Rumor Has It, Rolling In The Deep, Love You Like A Love Song, Some Nights, Locked Out Of Heaven and Stronger. Maybe our kids really WILL have something to sing twenty years from now ... without having to censor themselves three or four times in each verse! (kk)

And here's a really interesting article (sent in by FH Reader Frank B) reminding us where some of this great music came from in the first place. (Timely with New Year's Day right around the corner!) kk
Click here: 1948 Musicians Strike | Recording Ban | The Silence That Sparked New Sounds | By Marc Myers - WSJ.com

One of the stories we covered earlier this year that got national attention was that of Lester Chambers of The Chambers Brothers, who psychedelicized our lives with their 1968 Hit "Time Has Come Today". Here is a year-end update on that story, courtesy of FH Reader David Lewis:
Click here: On Web, 'Time Has Come' for '60s singer - CNN.com

HEY KENT ...
HOPE ALL IS WELL ... SAW YOUR MENTIONING OF ADDING NEW CD'S TO YOUR CHRISTMAS COLLECTION EVERY YEAR, AND WE DO THE SAME THING ... HOWEVER, I STILL HAVE THE NEW BEACH BOYS CD FROM THIS SUMMER IN THE CAR, AND I'VE BEEN LISTENING TO IT OVER AND OVER ... IT'S THAT GOOD! I WAS INITIALLY HESITANT, BUT WAS PLEASANTLY SURPRISED ... SOME OF THE TRACKS ARE JUST KILLER, AND I THINK ANY OF YOUR READERS WHO HAVEN'T CHECKED IT OUT YET, SHOULD! TOO BAD THE REUNION ENDED ... ALTHOUGH THE BAND WAS AMAZING AND OUTSTANDING LIVE, I SURE WISHED THEY WOULD HAVE LET BILLY HINSCHE IN ON THE FUN ... HE DESERVED TO BE THERE, AND WOULD HAVE ADDED ANOTHER DIMENSION OF CARL THAT WAS MISSING (LOVE YA, BILLY!)
HAVE A GREAT NEW YEAR!!!
MICHAEL G. BUSH
It's a good one, to be sure. And the REAL shame, of course, is that Brian was ready to do another (until Mike felt it necessary to let everybody know that HE is The Beach Boys ... not the actual guys who made this comeback tour such a success.) On the plus side, a 21-song live DVD is available, culled from their comeback concert performances ... and, at least for a couple of hours anyway, you can watch America's Band having fun fun fun up on stage together again. (Reasonably priced, too ... and well worth adding to your collection.) kk
Click here: Amazon.com: The Beach Boys Live in Concert: 50th Anniversary: Beach Boys: Music

re: AND, SPEAKING OF GREAT REUNIONS:
Just got these shots from FH Reader Tom Cuddy, who tells us The Rascals performed thirty songs in two hours!!! Man, I hope they take this show on the road! (kk) 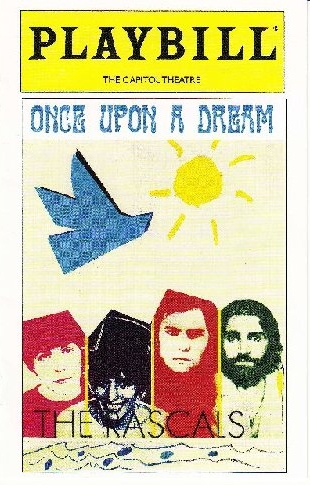 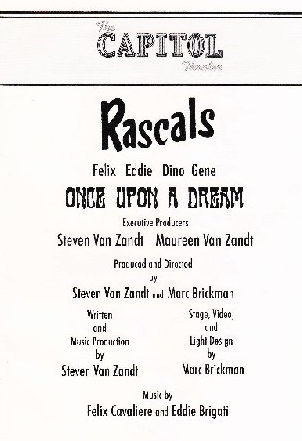 And it sounds like we just may get our wish! Venturing outside New York's Capitol Theater ... and extending the reunion at least another six months ... we just got word that The Rascals will be performing in Florida over Memorial Day Weekend, 2013!!!

The Rascals will perform at Hollywood, FL’s Hard Rock Café over Memorial Day weekend. The band’s original lineup — keyboardist / singer Felix Cavaliere, singer Eddie Brigati, guitarist Gene Cornish and drummer Dino Dinelli — reunited for a series of shows at Port Chester, NY’s Capitol Theatre earlier this month. Besides a few private appearances, these were the influential ‘60s band’s first shows in 40 years.  Billed as Once Upon a Dream, The Rascals’ reunion shows combined prerecorded interviews and video reenactment of the band’s early days with a traditional concert. E-Street Band guitarist Steven Van Zandt produced the shows and wrote the concert’s scripted moments. During the show’s Port Chester finale on Saturday, December 22, Van Zandt took the stage with The Rascals for a bow during their encore. He plans to bring the Once Upon a Dream show to other markets, including the above-mentioned Hollywood, FL Hard Rock Café.

re: THE HIT PARADE HALL OF FAME:
Although the 2013 list of nominees won't officially be released for another week or two, we just obtained this photo montage that may help to tip off some of our astute readers as to who the newest candidates will be. Take a gander at this for an early tip-off! (kk)

re: THIS AND THAT:
Former Buckinghams lead singer Dennis Tufano has been filling in some pick up dates with The Outsiders band during lead singer Sonny Geraci's recovery from brain surgery. (Sonny is reportedly doing extremely well and is on the mend.) Dennis performs both Sonny's hits and his own Buckinghams chart-toppers ... as well as selections from his Tribute To Bobby Darin Show. Ironically, Sonny Geraci performed a similar service several years ago when Rob Grill took ill and was unable to perform ... Sonny did his own Outsiders and Climax hits, along with all of the songs Rob made famous with The Grass Roots. As always ... the show must go on.Plans are also in the works for a benefit concert to help offset some of Sonny's massive hospital bills.  More details to come but right now they're hoping to put something together in the spring (possibly April?)  The show will most likely be held in Ohio, birthplace of The Outsiders.  Meanwhile, Dennis Tufano will reunite with former Buckinghams bandmate Marty Grebb to perform on January 25th at the NAMM Convention as part of the "Living Legends Concert Band".  This will provide the opportunity for these guys to trade off the vocals on "Mercy, Mercy, Mercy" just like they did on their Top Five Hit in 1967.  In Dennis' own words:

Marty will also be burning the keys off a B3 Hammond Organ for Hammond at the NAMM. Jimy Sohns will be there too.
I'll be returning to the Chicago area in Spring to perform again with "25 or 6 to 4" and Danny Seraphine, Jimy Sohns and more. Check your local listings! Lots of new things in the works for the new year.
Hi Fran!
Be Well
Best of the Holidays
Dennis
This from Tom Cuddy ... another report on how Fontella Bass never got paid a cent for writing "Rescue Me":     http://www.showbiz411.com/2012/12/27/fontella-bass-the-great-singer-of-rescue-me-dies-at-72
There is a video on YouTube about Jimi Hendrix's death that you might want to see - it's called "The Last 24 hours of Jimi Hendrix's Life".
Michael Lueras
Click here: Jimi Hendrix -- The Last 24 Hours - YouTube
This looks to be a one hour documentary special ... check it out when you've got some time. You'll find several other "Last 24 Hours" profiles here, too. (kk)

re: WINTER SONGS:
Kent --
If I'm not too late to cite a winter song (after all, we're going to be surrounded by winter for another three months!) I'll cite "Winter's Children" by the Capes of Good Hope, a Chicago no-hit wonder. (You've discussed it before, though I think it's been awhile.) The song is unusual in that its melody is adapted from J. S. Bach's "Sleepers Awake" and thus is one of several classical riffs in pop music of the '60s.
-- 73 --
-- Jeff Duntemann
Des Plaines, IL

You have a great site and very informative ...
Everyone I talk to loves it.
Have a wonderful Christmas!
Carl Giammarese

re: TODAY'S FORGOTTEN HIT:
Kent:
After postings in FH recently about the Tradewinds and "New York Is A Lonely Town," which in my eyes is the best tribute to the Beach Boys ever recorded, it reminded me of attending the first on stage reunion in 36 years (Oct. 16, 2010), of the two principals of the Tradewinds, Pete Anders and Vini Poncia, who performed at a sold-out concert in their home state of Rhode Island. That same night Pete Anders released his first album in over three decades called "So Far." I took this photo at the reunion concert in RI.

From left: Rhode Island born rocker, John Cafferty of the Beaver Brown Band; Gerry Granahan (Dicky Do and the Dont's and Producer to Jay and the Americans); Vini Poncia and Peter Anders.
Here’s an audio clip from You Tube:  https://www.youtube.com/watch?v=8wvoMVeaVuc
And, speaking of photos, in a recent update to the official Del Shannon website, a picture has been posted featuring Del, Wolfman Jack and Forgotten Hits reader and DJ Scott Shannon, the guy who originally introduced me to FH. http://delshannon.com
Tom Cuddy 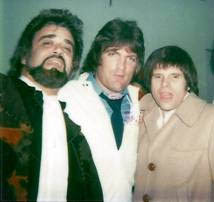 Hey Kent,
I'm so glad you pointed out that today's radio stations never play any of Melissa Manchester's hits. Maybe they think she's too MOR for today's audiences. Who knows? I didn't know she co-wrote "Whenever I Call You Friend" with Kenny Loggins. Even though I love the duet with Stevie Nicks, I can't help wonder how it would sound with Melissa. I, like you, have seen her in concert. She was here in the mid 70s. One thing I remember was that above the stage, were huge disc-like sound reflectors, that were painted gold. Melissa looked up and studied them for a few seconds, and said to the audience that she was scared that she was going to be taken aboard a flying saucer! Another thing I remember was that she did three encores and told the audience she'd be back, which drew a big cheer. Sadly, it never happened.
The front-act band was Orleans. They were great, especially Larry Hoppen's vocals and guitar work. Now he's in Rock 'n Roll Heaven. You can still hear their hits "Dance With Me" and "Still the One" on some stations, but never, "Love Takes Time", which is my favorite of the three.
- John LaPuzza
One of the more memorable shows I saw in the late '70's was headliner Melissa Manchester with opening act Burton Cummings, who had just hit the road as a solo act, hot on the heels of his first big solo hit "Stand Tall" ... a magical night of musical entertainment.
Manchester's version of "Whenever I Call You 'Friend'" appeared on her album titled simply "Melissa Manchester" ... it's a pretty tame, laid-back version that features male vocals by a guy named Arnold McCuller. I do remember Kenny Loggins was touring with Fleetwood Mac at around the time his hit duet with Stevie Nicks came out because I saw that show, too, down in Champaign, Illinois. Both acts were extremely hot at the time so it may have made good "marketing sense" to cut the duet that way ... but I always felt like Melissa, who co-wrote the song, was in some way cheated of another hit to notch on her bedpost as a result of that decision. (kk)