We've got another fine selections of charts for your enjoyment today.  (Special thanks to Clark Besch for sending these along.) 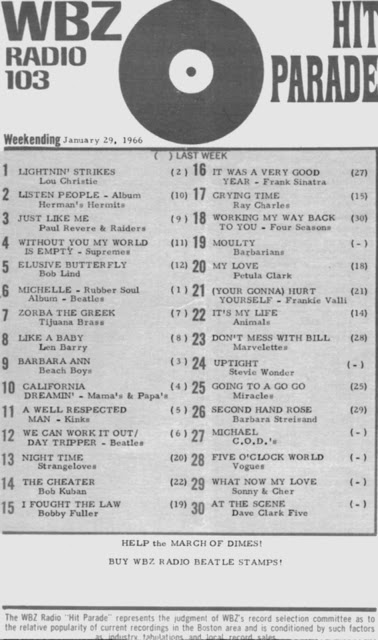 Everybody thinks album rock started on the FM Dial in the late '60's / early '70's ... but these weekly Top 40 Charts ... from some of the most popular AM Radio Stations in the Country ... continue to prove otherwise.

Look at The Beatles' track "Michelle" from their "Rubber Soul" album charting at #6.  (David and Jonathan would have a reasonably sized-hit with their cover version as ... INCREDIBLY ... Capitol Records never released this track as a single here in The States.  The way they regularly milked The Beatles vault for additional releases, this truly came as quite a surprise at the time.)

Our FH Buddy Bob Lind is at #5 with his biggest hit, "Elusive Butterfly" while Peter Noone and Herman's Hermits sit at #2 with "Listen People", also shown as an album track here.  (It became SO popular that MGM finally had to release it as a single a few weeks later ... and what a great track it is!)

You hear "Zorba The Greek" in television commercials all the time now ... people forget that this was a MAJOR hit for Herb Alpert and the Tijuana Brass back in the day.

Other surprises on this chart:  "Moulty" by The Barbarians at #19 ... this track never climbed any higher than #90 in Billboard.  "Like A Baby" by Len Barry, "Night Time" by The Strangeloves and "The Cheater" by Bob Kuban are also Top 20 Hits on this WBZ Chart from this week in '66.

Wow!  Look at this chart from WKY in Oklahoma City!

Ed Ames sits at #1 with "My Cup Runneth Over", edging out The Monkees and their monster hit "I'm A Believer" for at least the second week in a row.

Jim Edgar (who?!?!?  A local talent perhaps???) is at #5 with "Apartment #9" ... and the #6 spot is shared between Don Cherry and Jack Greene with "There Goes My Everything", a hit nationally for Engelbert Humperdinck.  Except this is nearly six months BEFORE the Engelbert version was released as a single here!

"Stand By Me" is a MUCH bigger hit here ... it's kind of a clever version where Spyder Turner mimics the vocal styles of several other FAR more successful soul singers than himself!  (lol)

And one of my all-time favorites, "Summer Wine"  by Nancy Sinatra and Lee Hazlewood is locked in at #12, up five places from the week before.

You'll find quite a few Top 50 Hits on this chart that seem to be unique to the Oklahoma area.  FH Reader (and former Okie DeeJay) Larry Neal has shared chart information with us for years now ... they certainly did seem to have a different approach to calculating the hits! 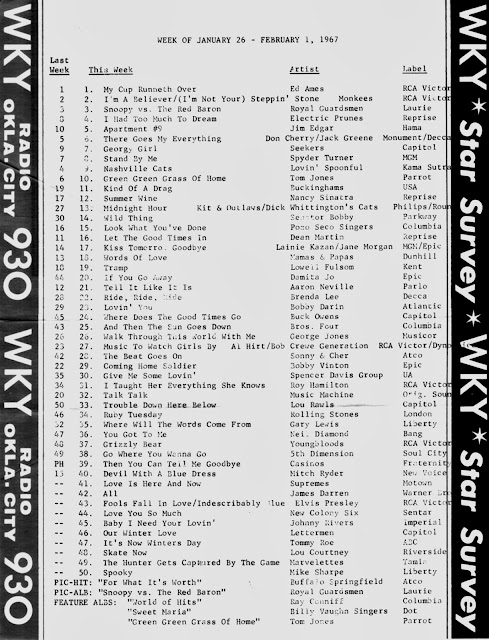 Kent,
You wanted to know who Jim Edgar was. Back in the 1960's, Jim Edgar and his group, the Roadrunners, were probably without question, the number one band of all time here in the state of Oklahoma. They were the pioneers of the local music scene. Other bands tried to imitate them, but none could come close to the dominance they had on the music scene they had here in Oklahoma.
They primarily had four records which made our local top 40 radio station's weekly survey. The four records were as follows:
1. LITTLE PIG / RAINS which came out in 1963 on Chan Records. RAINS was a Jim Edgar tune with LITTLE PIG being the same song that Dale Hawkins recorded earlier in 1958.  Both sides were equally played here in OKC.
2. FUNNY HOW I FEEL / TREASURE OF LOVE from 1964 on DJB Records. FUNNY HOW I FEEL was again a Jim Edgar composition with TREASURE OF LOVE being an uptempo version of the song that Clyde McPhatter recorded in 1956. Again, both sides were equally played here in OKC. Personally speaking, his FUNNY HOW I FEEL is my all time favorite Jim Edgar tune.
As for the information about the song THERE GOES MY EVERYTHING by artists Jack Greene and Don Cherry, you are correct in that both versions did well and charted well here in OKC.  Back in the sixties, there were quite a few, many in fact, country records that would cross over.  Jack Greene also had another crossover hit here in OKC with his 1967 song ALL THE TIME recorded on Decca as well as his THERE GOES MY EVERYTHING. Maybe Jack Greene recorded the song in late 1966 which is why it made the survey in early 1967.
As for Don Cherry, whose biggest hit probably was BAND OF GOLD back in 1956, well, he had Oklahoma ties is some ways. As I remember he had relatives living in Oklahoma and every year for I don't know how long, he came to Oklahoma and participated in a golf tournament here. Back in the sixties, Don Cherry recorded for Monument Records and every record that was released by him on that label, was played here on our local top 40 radio station. Probably his biggest hits here in OKC on that label were  I RUN TO THE DOOR in 1967 and I LOVE YOU DROPS in 1965 as well as the one you mentioned.
3. TENNESSEE STUD which came out in 1966 on major label Scepter Records. This of course was his version of the 1959 Eddie Arnold tune. It was somewhat more of an upbeat version that Eddie Arnold's ... TENNESSEE STUD peaked at #5 here in OKC in May of 1966.
4. APARTMENT #9, as you said, made it to #4 here in OKC back in early February of 1967.  It was on the Hama Record label.
As far as I know, Jim Edgar is still alive and well here in Oklahoma. For many years, as I understand it, he worked for the Ditchwitch Company in Perry, Oklahoma.
Larry Neal

Check out this chart from 1970.  Most of the usual suspects are here ... but so are a handful of surprises!

"Jennifer Tomkins" by The Street People at #5 ... that's one of Rupert Holmes' earlier bands

The New Colony Six at #12 with "Barbara, I Love You", probably my LEAST favorite single by them ... but still a major surprise since it only reached #78 nationally

"Mornin' Mornin'" by Bobby Goldsboro and "She's Ready" by Spiral Starecase in The Top 20!

And "Crazy Annie" by Evie Sands, the Nazz version of "Hello It's Me", "Monster", a great Steppenwolf track and "Compared To What" by Della Reese rounding out The Top 40.  (Talk about diversity!!!)

Speaking of which, look at "Heartbreaker" by Grand Funk Railroad and "You Got Me Hummin'" by Cold Blood bringing up the rear!

This chart is WILD!!! 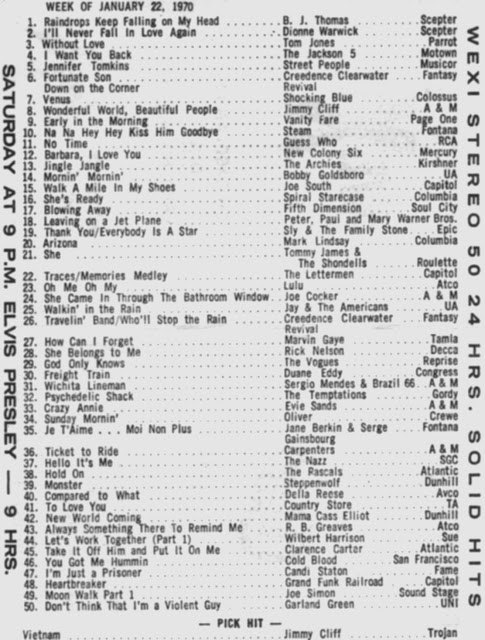