Every Friday we've been looking back 50 years to re-examine The British Invasion ... but here in St. Paul, Minnesota, it looks like it's America's Band that's topping the chart this week in 1964.

The Beach Boys have a two-sided hit with "I Get Around" / "Don't Worry Baby" ... and you'll find Johnny Rivers, The Four Seasons, Roger Miller and Jan and Dean firmly positioned in The Top Ten this week, too.

That isn't to say that British Acts aren't well represented.  Billy J. Kramer and the Dakotas hold down the #2 spot with a two-sided hit of their own, "Little Children" / "Bad To Me", followed by The Dave Clark Five at #7 with "Can't You See That She's Mine" and Dusty Springfield's "Wishin' And Hopin'" at #9.  Peter and Gordon have back-to-back hits on the countdown this week with "A World Without Love" at #12 and their follow-up release "Nobody I Know" at #13.  Both songs were written by the hit song-writing team of John Lennon and Paul McCartney who also happen to have the #14 record this week with their very OWN two-sided hit "A Hard Day's Night" / "I Should Have Known Better".  (You'll also find The Beatles at #35 with "Love Me Do" / "P.S. I Love You" and premiering at #39 with "Ain't She Sweet", a tune they recorded in Germany several years earlier.)

I think it's great that one survey can encompass so many different styles of music ... jazz ("The Girl From Ipanema" by Getz and Gilberto) at #17, show-tunes ("People" by Barbra Streisand at #25), folk music ("Today" by The New Christy Minstrels at #37), Motown Soul ("My Guy" and "Where Did Our Love Go" by Mary Wells and The Supremes respectively), the Sounds of The British Invasion, middle-of-the-road stuff like Dean Martin's "Everybody Loves Somebody" playing right alongside The Trashmen with their latest, "Peppermint Man". 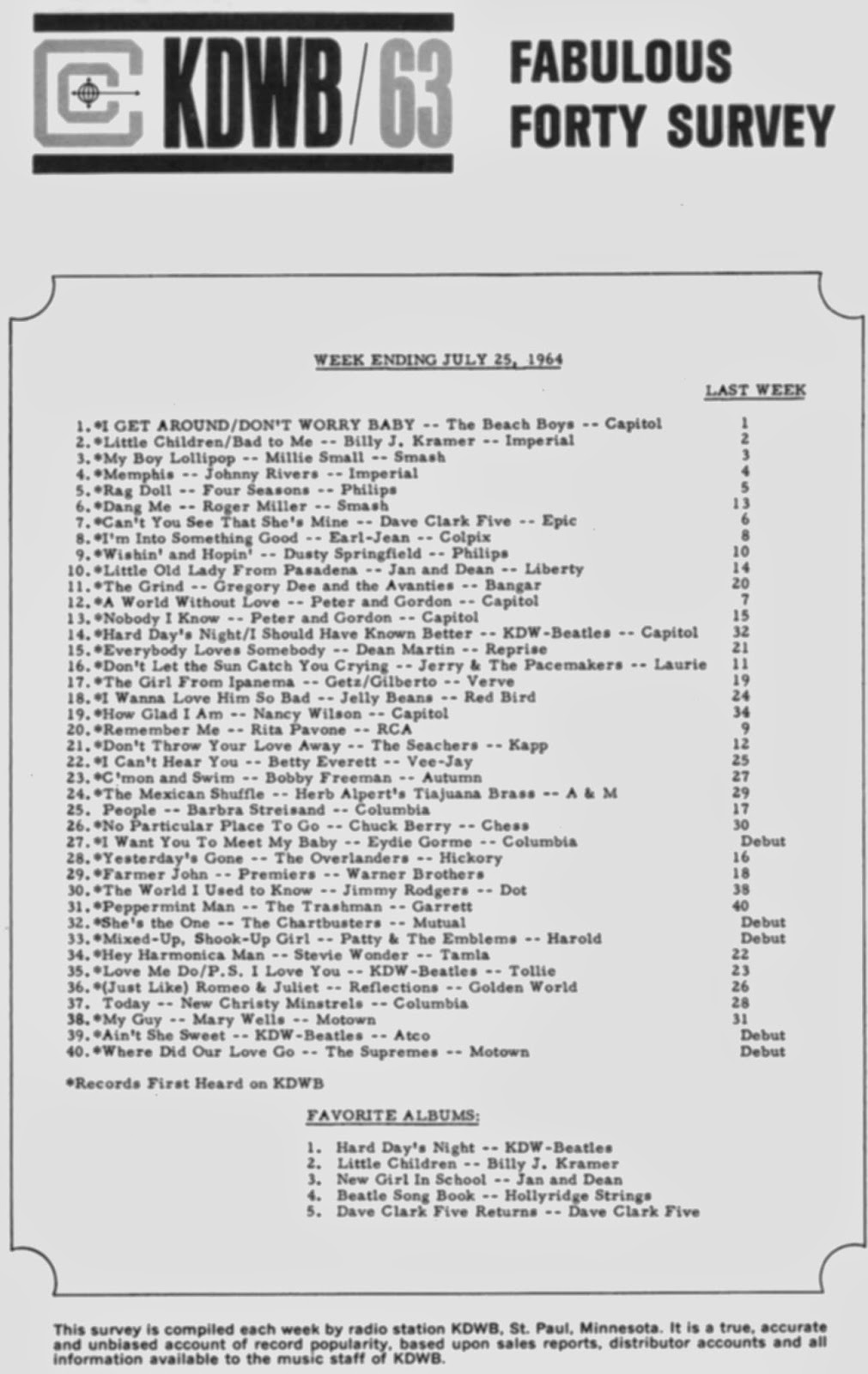 The Beach Boys also topped this KDKA Chart from 1965 with "California Girls".  (Probably not a whole lot of surfin' goin' on in Pittsburgh that summer!)  Their latest jumps from #14 to the top of the charts!

The Righteous Brothers have a two-sided hit at #2 with "Unchained Melody" / "Hung On You" and The Beatles premier at #10 with their latest, "Help!"

Check out the #4 Record ... "Happy Feet Time" by The Monclairs.  (This one "bubbled under" in Billboard, peaking at #108 ... but here in Pittsburgh, it was a Top Five smash!)  And they weren't a local group either ... Joel Whitburn's book refers to The Monclairs as "an R&B band from Cleveland, Ohio"!

Now here's a station that clearly went its own way!

Check out THIS Top Five ... The Carpenters are on top with "Yesterday Once More", followed by The Charlie Daniels Band with their first big pop hit "Uneasy Rider".  Another somewhat novelty country / swamp song follows by way of Jim Stafford's "Swamp Witch", a song that predated his big break-through hit "Spiders And Snakes" by about six months.  (It only climbed as high as #39 in Billboard ... so seeing it at #3 is a real treat!)

And then you've got Deep Purple with THEIR classic "Smoke On The Water" settled in at #4 ... and Gilbert O'Sullivan climbing to #5 with his latest, "Get Down", a record that would top the charts here in Chicago.

You'll find a couple of other country cross-over hits as you scale down the survey ... "Behind Closed Doors" by Charlie Rich, "Lord Mr. Ford" by Jerry Reed and "I'd Rather Be A Cowboy" by John Denver just to name a few.

There are also a couple of other novelty tracks ... "Monster Mash" by Bobby "Boris" Pickett and "Back When My Hair Was Short" but Gunhill Road are at numbers 8 and 7 respectively ... but rockin' hits like "Money" by Pink Floyd and "We're An American Band" by Grand Funk Railroad also found a spot on the chart this week.  And check out the David Gates solo hit "Clouds" at #22 this week, too. 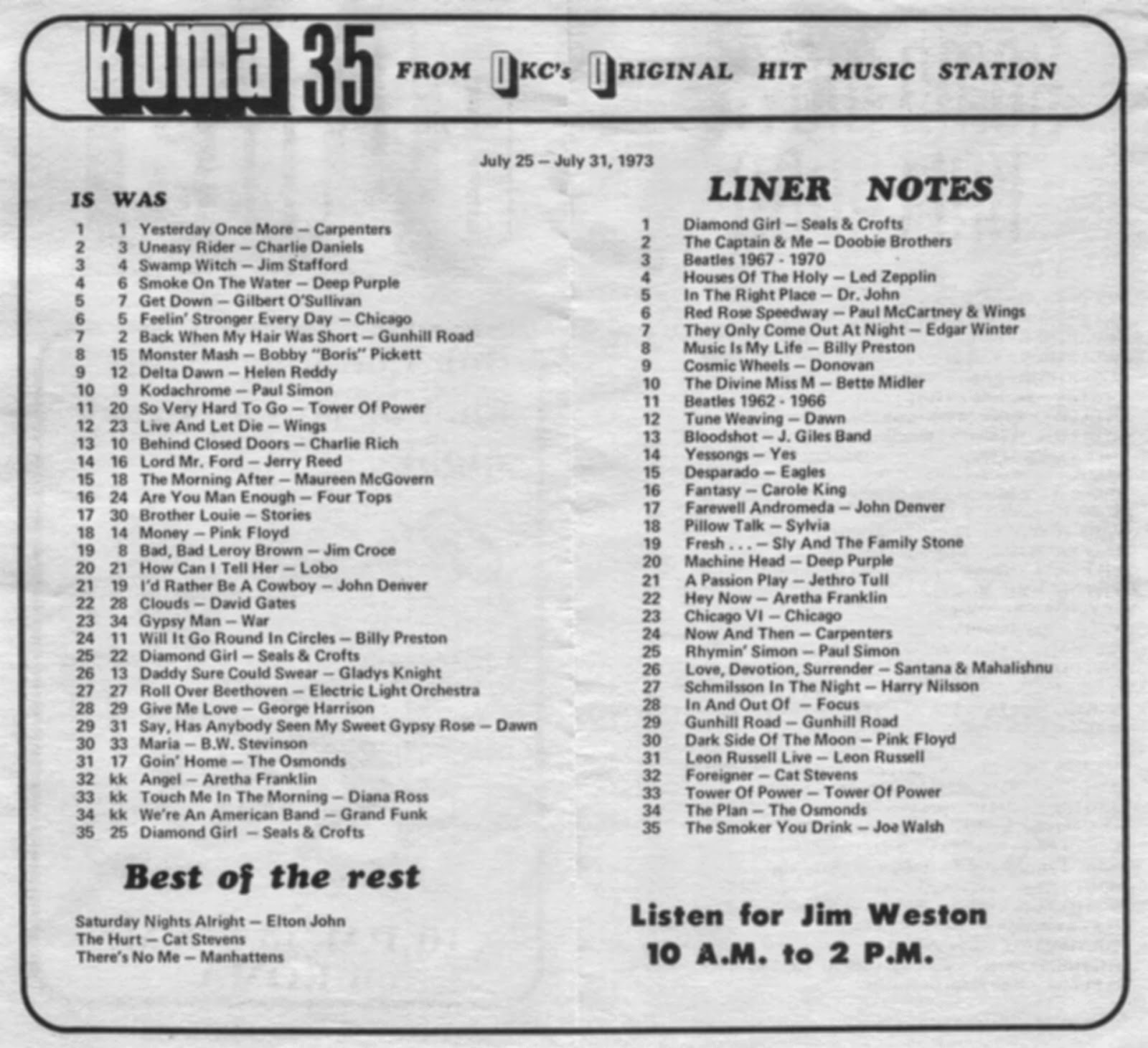 There are a few surprising Top Ten Hits on this KXOK Chart from 1969, too!

The Grass Roots hold down the #1 Spot with their latest, "I'd Wait A Million Years", something they were never able to achieve on the Billboard Charts.  The #3 Hit is "Abergavenny" by Shannon, a song that did pretty well here in Chicago, too ... but peaked at #47 on the Billboard Hot 100 Pop Singles Chart.  Cat Mother and the All-Night Newsboys are at #4 with "Good Old Rock And Roll" (a song we featured a few weeks back) and Elvis is at #6 with "Clean Up Your Own Backyard",  a record that wouldn't climb any higher than #35 on the Billboard chart.

Sitting at #11 is the Underground Sunshine version of The Beatles' classic "Birthday".  (That record went all the way to #2 here in Chicago ... but petered out at #26 in  Billboard.)  Listening back to it now, it's a wonder it charted at all ... it's a pretty awful rendition!   And check out The Rolling Stones at #17 with their mis-spelled hit "Honkey Tonk Woman" (which has an extra "e" where it doesn't belong ... and is MISSING the "e" where it does!!!) 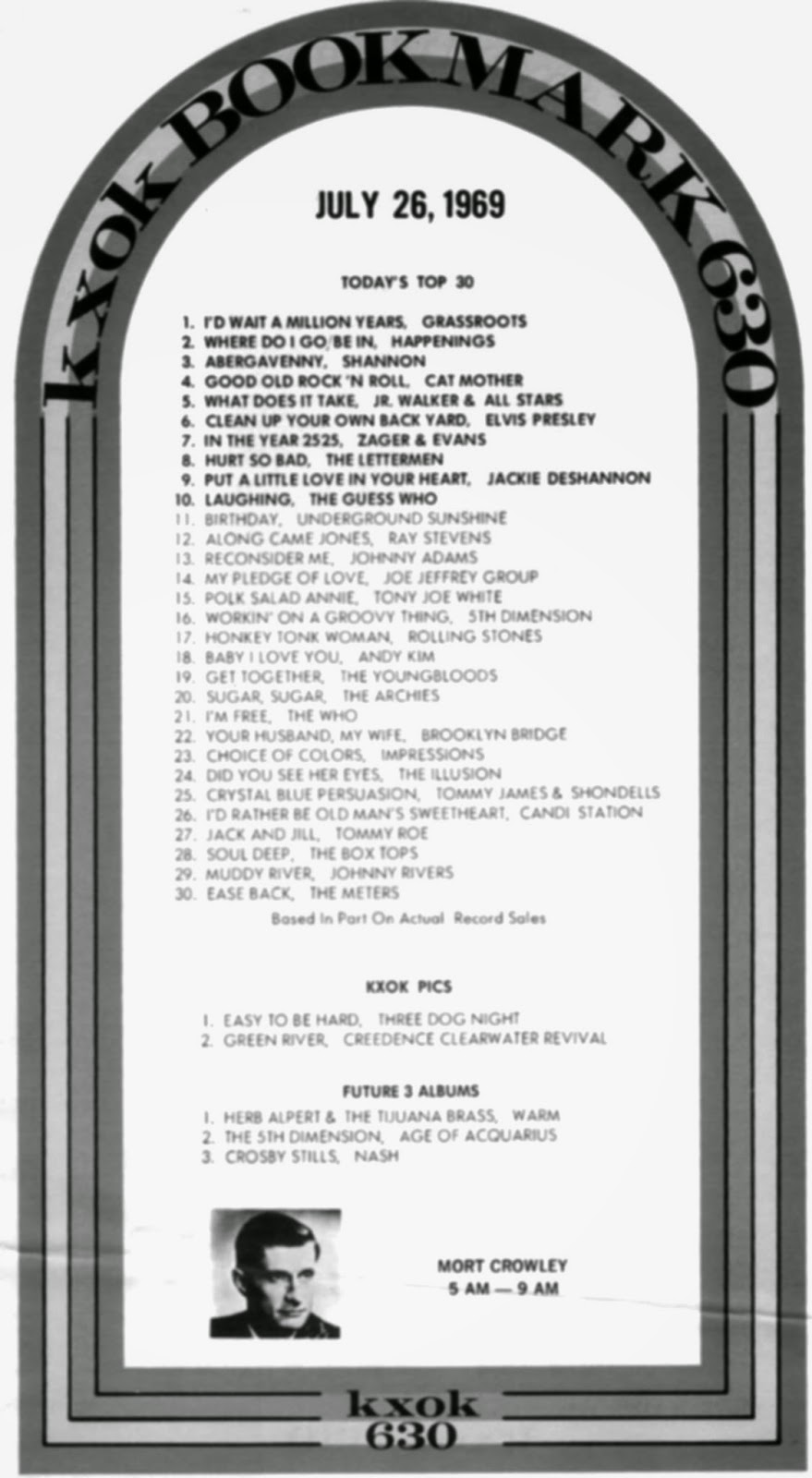 And what's wrong with THIS chart from Radio Splendid 1200?  Well for one thing all of the songs listed are from about six months EARLIER on everybody else's charts!!!  In fact, "Mellow Yellow" dates back to the previous year!!!

So this is either a SERIOUS typo on the date ... or maybe D. Michael was broadcasting out of his basement at the time.  (I can't find any official call letters anywhere on this chart ... nor the name of a city!)

It IS cool to see The Cryan' Shames ranking at #14 with "I Want To Meet You" (actually "I Wanna Meet You" on the label) ... and check out The Electric Prunes' hit "I Had Too Much To Drink"!!! (lol)  While that very well may have been true, the REAL title of their biggest hit was "I Had Too Much To DREAM (Last Night)"!!!  They've also got The Casinos premiering at #25 this week with "Then You Can Tell Me Goodbye" ... which debuted in Billboard back on January 14th ... a full 24 weeks earlier!!! 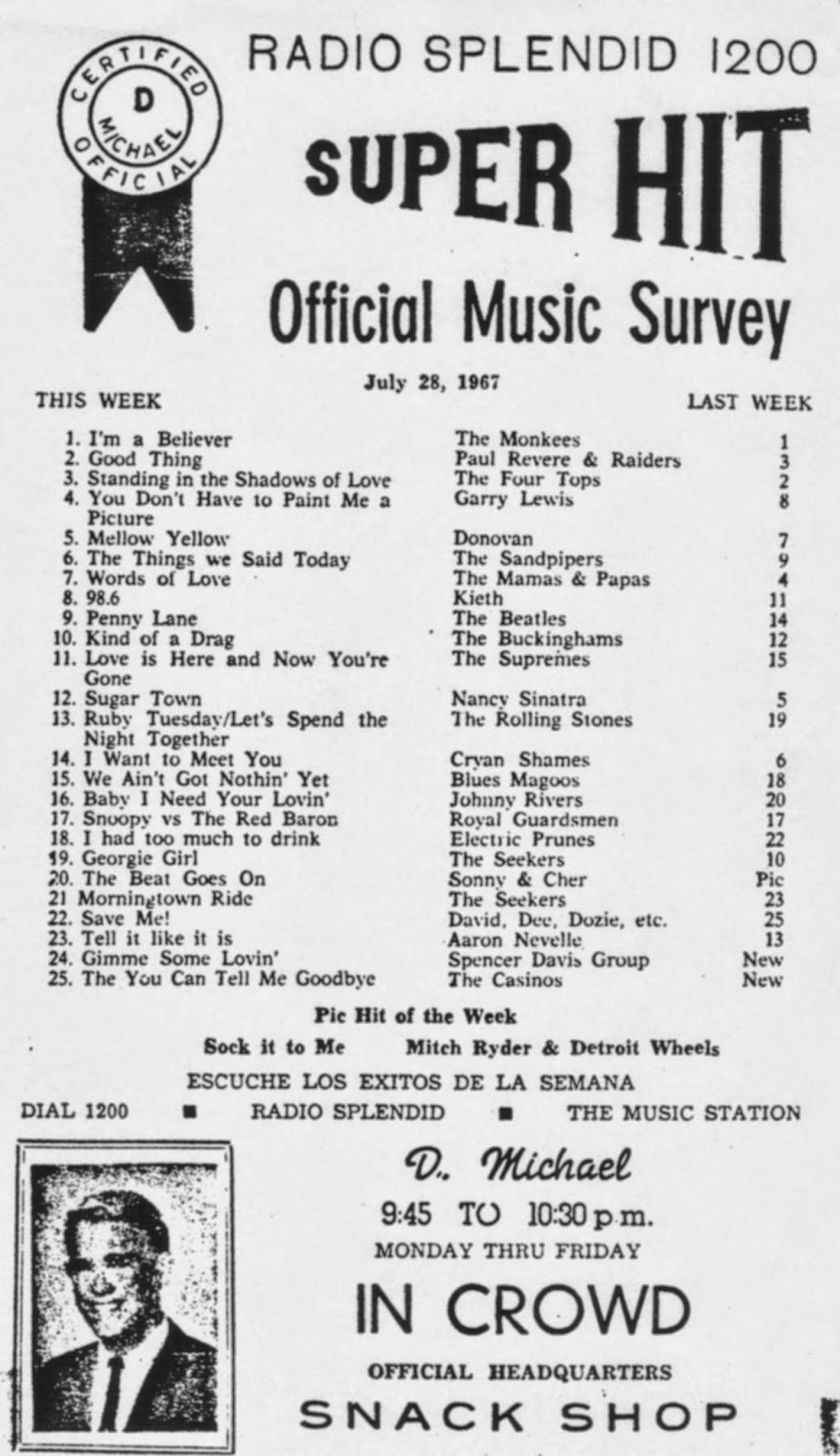