We've been talking about this one for nearly a month now ... I am SO disappointed that this show isn't coming to Chicago!

And then, right before it started, we got some sad news that due to more heart problems, Gerry Marsden (and the Pacemakers) would NOT be able to perform ... he's one of my favorites from The British Invasion ... but doctors forbid him from traveling to The States ... so former Swinging Blue Jean / Hollie Terry Sylvester stepped in to fill his spot because, as they say, the show must go on.

Fortunately we had THREE Forgotten Hits Readers present at the kick-off show in Ridgefield, CT ... and all have filed their reports below.  (Since this is such a limited tour ... and they've announced that more dates would NOT be added ... the rest of us may have to live vicariously through these excellent reviews ... until next time.)

Hi, Kent -
“History of Rock ‘n’ Roll” engineer Peter Gould and I had a great time backstage at the Ridgefield Playhouse in Ridgefield, CT, interviewing the stars of The British Invasion 50th Anniversary Tour, which kicked off here a couple of nights ago. Mike Pinder, lead singer of The Searchers, was there, not only delighting the packed house with rock classics like “Needles and Pins” and “Love Potion #9” but, in a much quieter back office, sharing with Peter and I the inside stories behind the songs and saga of his group from its start in 1959 on through to the present.
Also on hand: Terry Sylvester, who first gained fame with The Swingin’ Blue Jeans and later, far more spectacularly, with The Hollies (“He Ain’t Heavy, He’s My Brother,” “The Air That I Breathe,” etc.) Terry’s story behind what I consider one of the ten best rock records ever made (“Long Cool Woman In A Black Dress”) was particularly compelling, in that that track was intended as the throwaway B side of single to be released only in Germany. Quite by accident, one German DJ broadcast the “wrong side” of the 45 – sparking an avalanche of telephone requests to ‘play that song again.” That’s how what became The Hollies’ all-time biggest seller got launched.
Billy J. Kramer was equally enthusiastic, discussing “Bad To Me,” “Little Children” and his roots in the same tiny town that spawned The Searchers (Bootle, England). Denny Laine recalled his brief run with The Moody Blues (“Go Now”) as well as his key role (along with Paul and Linda McCartney) in Wings – a gig which ran for a full decade (1971-80) and included the writing of 1976’s “Mull of Kintyre,” which spent nine weeks at #1 in the U.K. but surprisingly never charted in the U.S. (It’s B-side, “Girl’s School,” reached #33 stateside instead.)
While Chad & Jeremy were both listed on the bill, only Chad Stuart appeared as Jeremy’s international flight had been delayed. Chad, though, sat down and spoke to us and told about the writing and production of “Yesterday’s Gone,” “A Summer Song” and their other key mid-‘60s hits. One disappointment: Gerry & the Pacemakers’ Gerry Marsden had been forced to cancel at the last minute due to heart surgery. Peter & Gordon’s Peter Asher, who acted as MC, explained that Gerry had just emerged from the hospital and was resting comfortably at home but could not fly yet as his doctors forbid it. While it would have been great to see and hear Gerry’s shimmering vocals on hits like “Ferry Cross The Mersey” and “You’ll Never Walk Alone,” the crowd understood and collectively wished Gerry a speedy recovery.
Filling in for this date only, Mr. Asher sang some of his Peter & Gordon hits with others as his original partner, Gordon Waller, had passed away in 2009. Backstage Peter talked to us about his Peter & Gordon days as well as his later work as a Grammy-winning producer, crafting albums for James Taylor, Linda Ronstadt (his favorite female singer) and others.
Our plan is to shortly work highlights from those interviews into new episodes of "The History of Rock 'n' Roll," which is heard three times a day around the world on rewoundradio.com and supernovaradio.co.
Come see for yourself what all the excitement is all about as this band of British Invasion stars continues to tour America, presenting live versions of some of the most timeless rock classics ever recorded. The British Invasion 50th Anniversary Tour is scheduled for a few more shows.
(The upcoming concert dates are accurate as of the last time I checked but changes and additions are quite possible so you might want to double check the tour itinerary before you make plans to attend.)
The next will be Friday, September 19th in Los Angeles (Beverly Hills), Saturday, September 20th in Valley Center, CA. and Sunday, September 21st in Saratoga, CA.
For more information, visit their facebook page at: https://www.facebook.com/events/652017618202135/
Gary Theroux
"The History of Rock 'n' Roll"

Kent,
I was fortunate enough to catch the first date of the most recent "British Invasion 50th Anniversary Tour" at the Ridgefield Playhouse in Connecticut last night.  A fun show -- and nearly three hours long!A couple of snags made the lineup a bit different from what had been advertised.  Headliner Gerry Marsden had to withdraw due to what was described as heart surgery.  Apparently, he's recovering in England, but his doctors nixed his participation in the tour.  [Please, no "Gerry and his pacemaker" jokes.]  So he was replaced by Terry Sylvester, former member of the Hollies (1969-81) and, before that, of the Swinging Blue Jeans (1966-69).  Chad and Jeremy's act was bisected by some passport / visa hassles involving Jeremy Clyde, who had to stay in London until the mess is straightened out.  Jeremy communicated with the show (and the audience) via Skype, live from his apartment and in his PJs, it being past midnight in England; his comments were broadcast on the huge multimedia screen at the rear of the stage.Jeremy's being unable to appear did lead to a first (?) of sorts: duets involving Chad Stuart and Peter Asher, formerly of Peter and Gordon.  Peter took Jeremy's parts in such classics as "A Summer Song" and "Yesterday's Gone."  Peter also acted as the show's emcee and performed a generous handful of Peter and Gordon's big hits, from "A World Without Love" to "Lady Godiva."Terry opened the show with Hollies songs (in fact mostly from before he joined the band, however) and a couple from his Swinging Blue Jeans days, including "You're No Good."   He was followed by Mike Pender, late of the Searchers, who did a handful of that band's greatest; he looked to be in great shape and his guitar playing is still superb.  Then came Chad and Jeremy -- or, rather, Chad and Peter -- followed by Peter and the backup band doing his hits, the parts of the late Gordon Waller being handled by multitalented keyboardist, guitarist, and vocalist Jeff Ross, who was with the touring version of Badfinger in the mid-1980s.  (This British Invasion tour's drummer is the excellent Liberty DeVitto, best known for his work with Billy Joel.)After an intermission, Billy J. Kramer took the stage to reprise all his hits and some new material, including "Liverpool With Love," which is not only about his hometown but about the fact that his (and the Beatles') former manager Brian Epstein has this year been inducted in the Rock and Roll Hall of Fame.  For quite some time, Billy has been banging the drum for Brian's admission to the Hall of Fame, and at last it's a reality. Billy had plenty of energy, but he could stand to drop a few pounds; the multimedia images of himself 50 years ago made it all too evident that he is no longer the fresh-faced 20-year-old he was when Brian managed him. Denny Laine, who looked and acted way younger than his 69 years, concluded the show with a scant three songs, including "Go Now" from his Moody Blues days.  (For my money, I would have preferred two or three fewer from Billy J. and two or three more from Denny.)  But then the whole crew got together for the finale, a lengthy singalong of "Band on the Run" from Denny's time as a member of Wings -- altogether a fitting end to an enjoyable evening.Not necessarily in terms of the music, but purely for being likeable, my favorite of the show was Peter Asher, who evidently is very fond of all his British Invasion compatriots and was the perfect person to introduce each act and tell a few when-we-were-fab stories, as well as dipping into the Peter & Gordon songbook for some favorites.  Plenty gear, in my opinion.
Henry McNulty
Old Saybrook, Connecticut

Forgotten Hits salutes and remembers The British Invasion every Friday this year in our "50 Years Ago This Weekend" feature.  Join us here tomorrow ... and don't miss a single one!  (Scroll back to catch up on any that you may have missed along the way!)  We LOVE this music ... and would have loved to have been at this show.  Hopefully, if these shows prove to be a success, more dates (and/or artists) will be added for a return trip in the not-too-distant future.

Thanks to all for sharing your experience with us!  (kk)

And finally, here's a photo of the final bow ... man, what a line-up!!! ... sent into us by FH Reader Brad Joblin, of The Ridgefield Playhouse (who was also there that night) ... 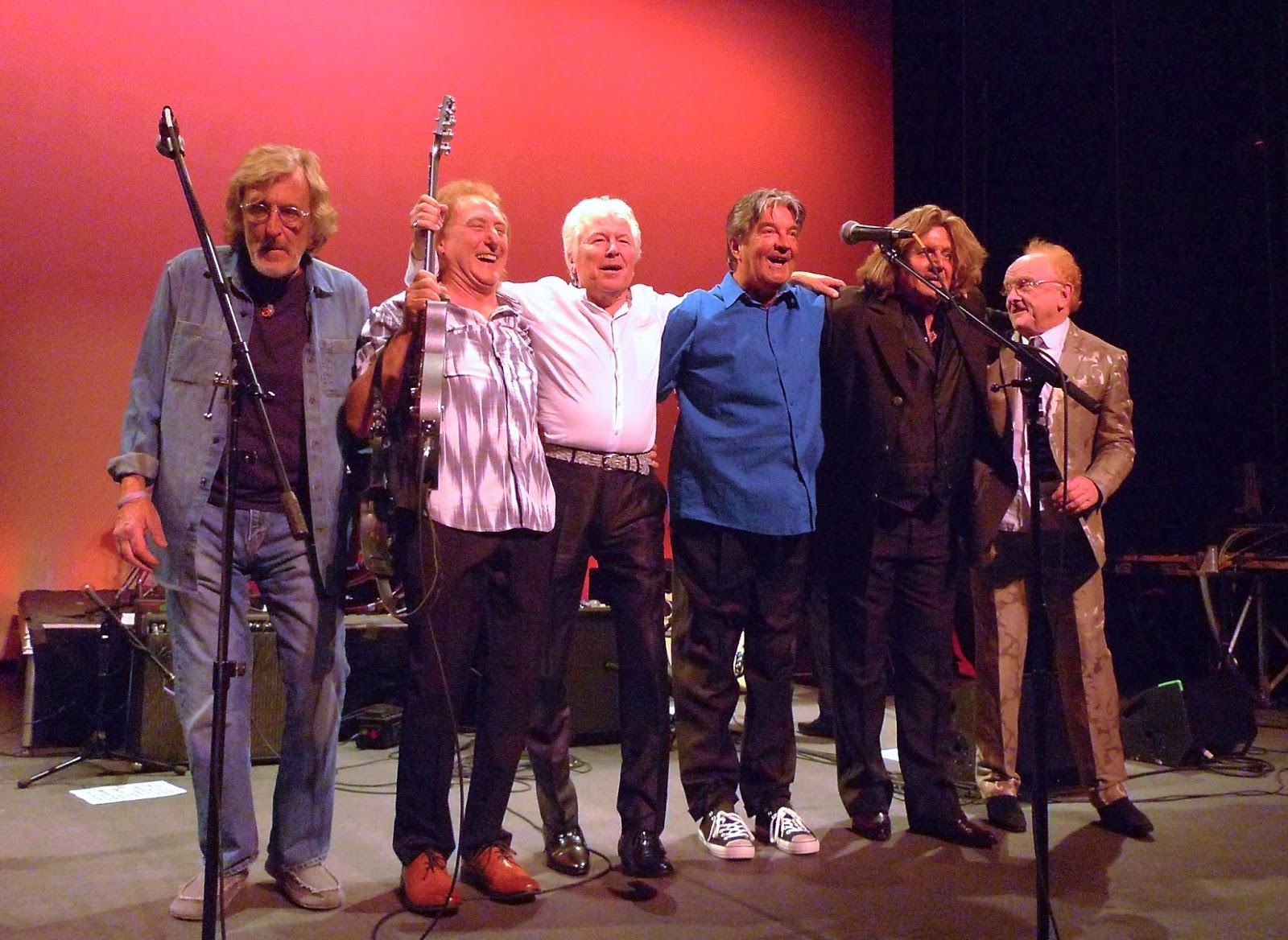