Happy Birthday, Tommy Roe!
Happy Birthday to our FH Buddy Tommy Roe, who turns 74 years old today!
We caught up with Tommy a couple of months back right  before his show at The Arcada Theatre ... and that meeting turned into a three-part interview now available on the website!
http://forgottenhits.com/forgotten_hits_interviews_tommy_roe 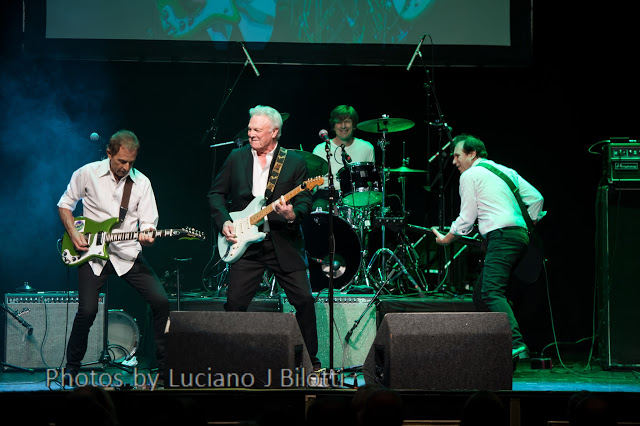 Tommy and Band, Rockin' The Arcada this past March 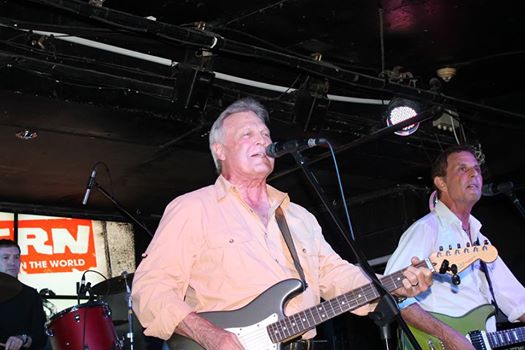 Tommy and Rick, performing at The Cavern Club in Liverpool, 2014 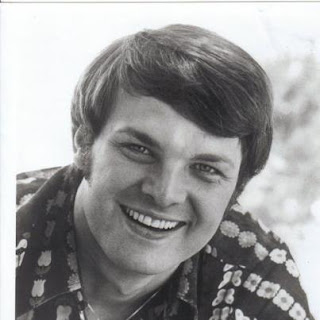 
Cornerstones Of Rock
Ah, the old bait and switch!  Kudos to you for calling them on it.  WTTW needs to make this right.
Roger
Keep in mind that when I received my first email from a fan and subscriber expressing their disappointment and pointing out that which was missing from the dvd, I hadn't even opened and played mine yet.  I, like many who have written in since, just assumed that the bonus material promised during the original broadcast would be included.  In fact, one of the MAIN reasons I never opened it was because I couldn't find a spot where I might have four available hours in a row to watch the whole thing!  So imagine my surprise as more mail came in, citing the same disappointment and unhappiness.
Now it really boils down to now is a matter of trust.
Maybe WTTW figures, "Well, we've already lost these subscribers ... why invest more money into this thing if it'll all eventually pass and we can put it all behind us."
But the truth is they should be held accountable for what they advertised.  Why would ANYBODY want to do good by the station and purchase more "specialty items" if they're allowed to alter what those items contain.  It's just wrong ... simple as that.
It's called "trust" and "accountability" ... and right now WTTW doesn't seem to be exhibiting either.  (kk)

Bobby Rydell
Bobby Rydell's biography is now available and he's doing a number of interviews to help promote it.  (Actually, we were supposed to be one of the first ... but somehow things got jazzed up with his PR Firm and it never happened.  In fact, we STILL haven't received our copy of his book!!!)
But that doesn't mean you can't still read all about it.
FH Reader Tom Cuddy just sent us this link:
http://www.philly.com/philly/entertainment/20160508_Talking_about_his_new_autobiography_with.html7 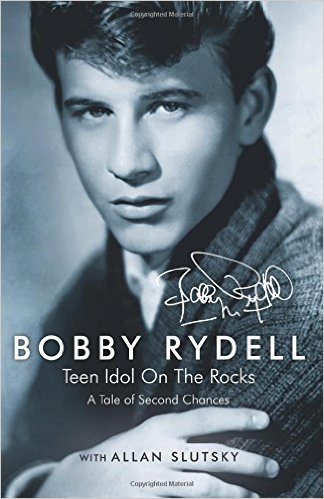 Motown's Biggest Hits
It's not surprising that the Motown Sweet 16 has more 80's hits than 60's hits. Motown has always been notorious for short changing their artists in getting their royalties. In fact, until Stevie Wonder threatened to walk in 1970 if he didn't get his due royalty rate, they might all still be working for chump change. In the 60's, Motown never disclosed to the RIAA, just how many units of a song were sold. Berry Gordy, was content just giving his artists a salary and, if they needed a car, he bought it for them. A house?  No problem. It was far cheaper then paying them royalties.
Motown was also notorious for counterfeiting their own records. Press up a million copies of My Girl and then counterfeit another million and sell them out of the trunk of a car at a far cheaper price. If you're a ghetto kid, you ain't gonna care if it's a legit copy or not. And you couldn't tell either.
It wasn't until I started working for the distributor that handled Motown that I saw this first hand. We'd get in returns from retail outlets and notice that the printing, on the spine in particular, was not clear. Compare it to trying to read the fine print without your glasses. Sometimes they'd sell to the small ma and pa outlets at a reduced price telling them the price is dependent upon them being sold the product as is. Of course these stores were willing to do anything to keep their profit margin up. So by the late 70's, Motown had to give it up, as those small stores were going out of business, and the larger chain stores and one stops were not gonna agree to a no returns policy, as they probably had enough records lying around that they were stuck with. In the mid 70's, with so many of the Motown stable of performers leaving, and a lack of a new generation of artists coming up, Motown had to straighten out their act or lose Stevie, Diana, Smokey and Marvin. In retrospect, I'm surprised that Motown 25 ever happened. Jack
http://forgottenhits60s.blogspot.com/2016/04/sweet-16-motown-25.html

ALAN PARSONS:
Once again we were treated to an INCREDIBLE show by The Alan Parsons Live Project Saturday Night (May 7th) at The Arcada Theatre.

There is nothing I can add to the glowing reviews we have already given this ensemble ... last year we ranked them as the #2 Concert of 2015 ... and the year before that, they took #2 AND #1 honors for the two shows they put on at The Arcada on the same night!

The entire show boasted impeccable musicianship and outstanding vocals throughout their two sets.

Well, for starters his entire album catalog is being reissued on vinyl.  (They were even selling autographed LPs in the lobby before and after the show.)  Alan told us the albums are coming out as 45 rpm pressings, insuring the highest quality of sound possible on vinyl, and most with bonus tracks.  (In fact his first release, "Tales Of Mystery And Imagination" is being issued as a 3-Disc set featuring the original mix of the album, the 1987 remix and an entire disc of bonus tracks and alternate versions.)

And, on June 3rd, a brand new live concert dvd will be available featuring The Alan Parsons Live Project performing in Colombia with a 70-piece orchestra.  (We've already pre-ordered our copy!)

You're not going to see a better show than this one.  We've been telling Forgotten Hits Readers for YEARS now to catch the act live when they come to your area.

Well, here's their current tour itinerary ... along with some more great shots from Luciano Billoti of the show we caught Saturday Night at The Arcada.  (kk) 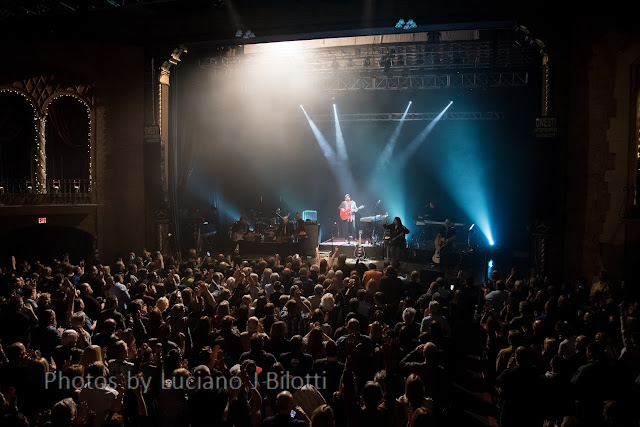 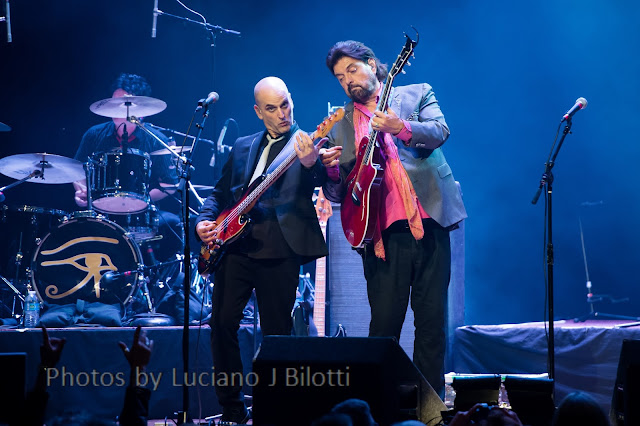 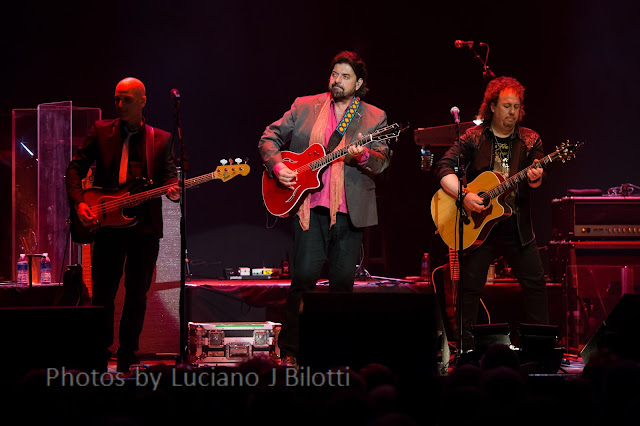