Phil Nee of WRCO-FM / 100.9 in Richland Center, Wisconsin, is running a six hour radio special Saturday Night (from 6 pm - Midnight local time) based on our recent "What's The Name Of That Song" feature. If you happen to be in the area, be sure to check it out!
http://www.wrco.com/resources/blog/entry/what-s-the-name-of-that-song.html
And WRLR-FM / 98.3 in Round Lake, Illinois, will be running a rebroadcast of Phil's show this weekend as well ... and you can stream this one as it happens here:  http://wrlr.fm/.  Be sure to check their program grid for air times.  (It's been a little while since we put together a radio program so I'm really looking forward to hearing this one myself!  lol  And, we've got a couple more "specials" coming up ... so stay tuned for more details.)  kk
Hey Kent,
I am enjoying reading through Uncut magazine's "Ultimate Guide" on the Beach Boys.
This is not another rehash of old, overly repeated news . It is an album-by-album coverage of their career interspersed with contemporaneous articles and interviews from NME and Melody Maker archives ... the stuff we wanted but could not get our hands on back-in-the-day.
When Tiger Beat puff pieces was about it for the US, British fans were feasting on serious interviews that respected Beach Boys music and asked serious questions. For this olderly BB fan, this is what I searched for but could never find.
Phil
PrayForSurgBlog.blogspot.com
Will have to look for this one ... I just checked Amazon.com and BarnesandNoble.com and neither had it listed ... gonna have to do a bit more digging.  Thanks, Phil!  (kk)
Speaking of The Beach Boys, David Beard just interviewed Al Jardine about the Pet Sounds tour currently running through October ... you can catch it here:
http://www.examiner.com/article/pet-sounds-50-journeyman-alan-jardine?CID=examiner_alerts_article
That Beattles record you reference in your story (Please Please Me) was first pressed in Owosso, Michigan, at the American Record Pressing Company factory.  They pressed many of the Vee Jay records in that era.  I suspect the first person in America to place that record on a turntable was in the sound / testing room at the Owosso factory as they did with samples of all the records they pressed.  There was a print shop in the factory where they printed the record name and artist etc, on the bottom and sides, with the rest of the circular labels being pre-printed and shipped to the factory.  Therein is the likely source of the spelling error.
I am working on getting the printer’s or typesetter’s name with two 90-year old friends who worked in the factory at that time.  If I ever get it, and it seems credible, I’ll send it along.  The factory also pressed the Introducing the Beatles album here and a few other Vee Jay 45’s and got the spelling corrected.
Phil Hathaway,
Owosso, MI
As far as I know, the original pressing of "Please Please Me" released in February of 1963 was the only time they misspelled it as "Beattles" ... somebody just not paying attention is my guess!  (kk) 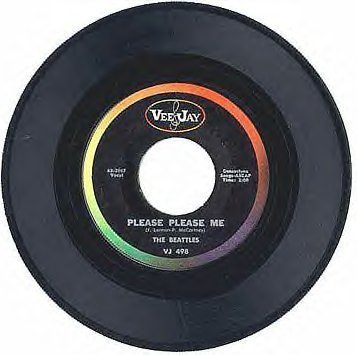