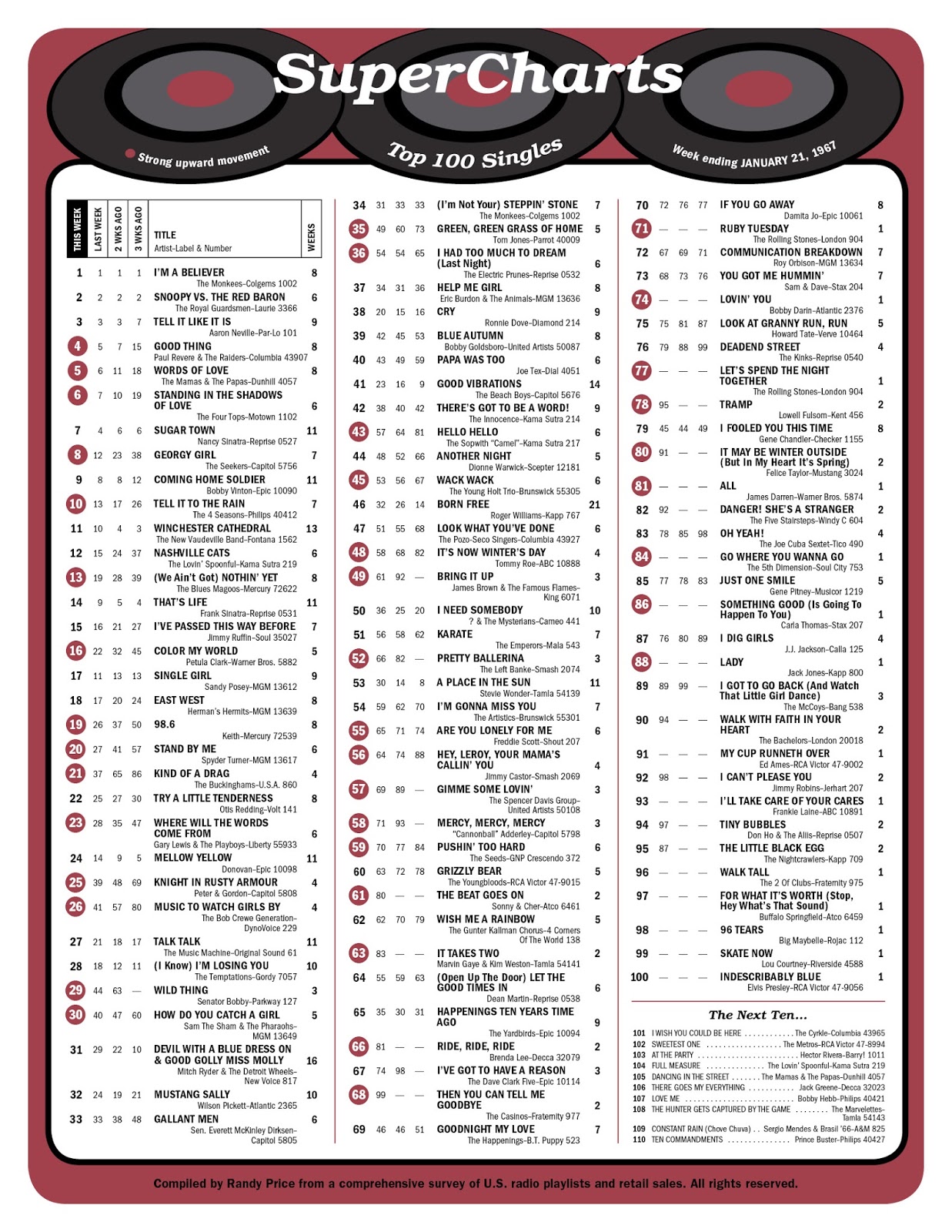 The Top Three Records maintain their hold on this week's countdown … "I'm A Believer" by The Monkees is #1 for the fourth straight week … which is exactly how long it has held "Snoopy Vs. The Red Baron" by The Royal Guardsmen at the #2 spot.  Following up at #3 is "Tell It Like It Is"  by Aaron Neville, who now holds down that position for three consecutive weeks.

The Monkees hold down the #1 spot on the Album Chart again this week, too, thanks to their debut album.  They are in the recording studio today, laying down an early version of Mike Nesmith's "The Girl I Knew Somewhere" (which, at this time, featured Nesmith on lead vocal instead of Micky Dolenz, whose vocal would make the record's official release later this year) as well as two tracks that won't make the final cut on their next LP, "Headquarters" … "She's So Far Out, She's In" and "All Of Your Toys".

Chicago's huge convention center, McCormick Place, is gutted in a huge fire.  Home to The Arie Crown Theater, it would not reopen until 1971. 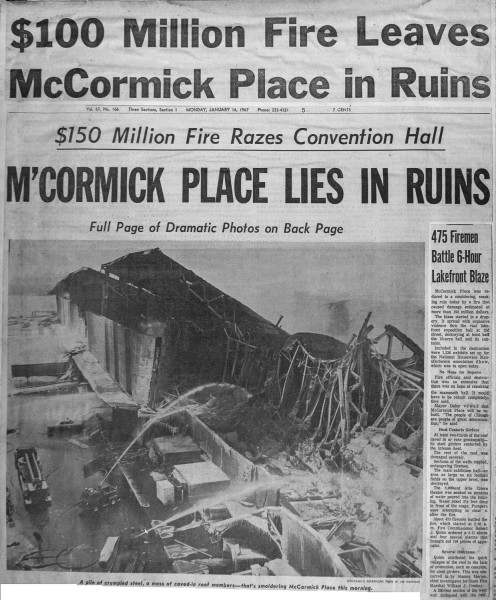 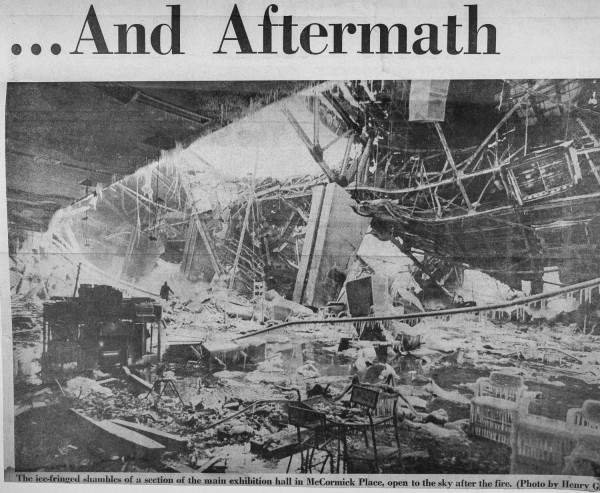 The fire was first reported by janitors at 2:05 am on the morning of January 16th ... within 20 minutes, it was upgraded to a five-alarm fire ... 20 minutes after that Fire Commissioner Robert Quinn ordered the first special alarm.  It happened that fast ... it took just 45 minutes for two-thirds of the building to be completely engulfed.  Quinn later commented that "the fire was out of control when the first units arrived."

Much as The Titanic was deemed "unsinkable", McCormick place (built in 1960) was supposed to be fireproof.  In the bitter cold early morning hours, firefighters lost time trying to thaw four of seven hydrants before realizing that they weren't frozen ... but had never been hooked up!  (It was later learned that contractors building the interchange of the Stevenson Expressway and Lake Shore Drive had disconnected them.)

Approximately 2000 firefighters, using 65% of the city's fire equipment (including drawing water from Lake Michigan from which three fire boats also pumped water onto the fire) battled the blaze for nearly eight hours.

The fire was finally contained at 9:48 am, by which time the roof had collapsed and the Arie Crown Theater was severely damaged but not destroyed.  Incredibly, only one person died in the fire ... 31 year old security guard Kenneth Goodman, whose burned body was later found in the rubble.

Mayor Richard Daley immediately vowed to rebuild McCormick Place.  "This is a tragic loss to the people of Chicago.  But remember the Chicago fire of 1871.  The people recovered from that one."  (McCormick Place was a HUGE money-maker for the city, bringing in as much as $300 Million a year in convention business and employing more than 10,000 people.)

True to his word, a brand new McCormick Place opened in January of 1971, built on the old foundation with a completely renovated Arie Crown Theater.  Conventions such as The Housewares Show and The Auto Show were soon hosting hundreds of thousands of visitors.

Incredibly, The Chicago Tribune was able to cover the story for their early edition (that's where all of these photos above came from.)  The fire wasn't even out yet when the newspapers hit the streets.

Here in Chicago, the lakefront disaster pushed the results of the very first Super Bowl to "second place" as far as the day's headlines went.  (We told you yesterday that The Green Bay Packers, led by Bart Starr, beat the Kansas City Chiefs by a score of 35-10.)


Jay and the Americans and Don and the Goodtimes appear on "Where The Action Is".

Two other favorites from this week's chart ...


"Snoopy Vs. The Red Baron" was a HUGE #2 Hit in early 1967.  It provided an immediate connection to the Charles Schultz character that captivated America (and the rest of the world) beginning in 1950.  (Schultz personally drew every "Peanuts" cartoon strip himself until his death in 2000.)  But the people behind the hit record never sought Schultz's permission to put his famous character to song so, as a back-up plan, they recorded an alternate version of the tune called "Squeaky vs. The Black Knight", should Schultz decide to put the kibosh on the whole project once the record was released. 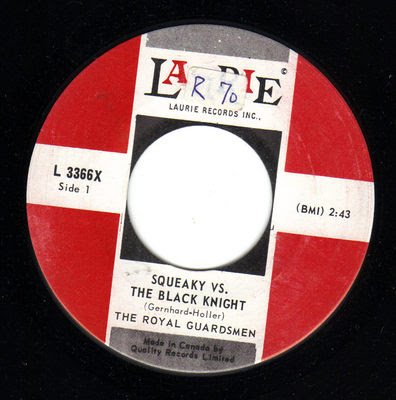 Just think ... if Charles Schultz had nixed this whole idea, you could have been listening to THIS track instead ...


Would it have been as big a hit?  Somehow I don't think so.  Another case of all the planets perfectly aligning ... "Snoopy Vs. The Red Baron" is a 1967 Classic!

Barry Winslow of The Royal Guardsmen told us:

As best as I can remember, Squeaky was done quickly to keep the momentum going that the record had started. So while the brass at Laurie Records met with Charles Schultz and friends to get this all sorted out, Squeak was launched. I wish I knew more, but as a 17 yr old "artist", I wasn't privy to any real "business dealings" early on.

kk:  So Squeaky vs. the Black Knight was actually launched in the event that Charles Schultz and company decided not to allow the use of their copyrighted character?  (It sounds like Laurie Records knew they had a hit record on their hands ... and wasn't going to risk letting anything get in the way of stopping the record's momentum ... so "Squeaky Vs. The Black Knight" was quickly recorded as the "back-up plan!"  Interesting!  I had no idea!)  One cannot help but wonder if the record would have had anywhere near the same impact, were it not a "relatable" character like dearly beloved Snoopy!  (In fact, instead of the recognizable beagle we all know and love, in the "Squeaky" version the lead character was a buck-tooth beaver!)

kk:  Speaking of copyrights, there was also evidently some issues with the use of the Snoopy name from creator Charles Schultz.  (But wasn't The Red Baron based on a real-life, actual person?)  I'm told that until Schultz was cut-in on a percentage of the royalties, he threatened a lawsuit to stop the record all together.  (Were the songwriters really that naive to think that there wouldn't be some legal action?)  How was all of this resolved?  And didn't Schultz become a big supporter of the follow up records, even designing artwork for the album covers and picture sleeves?  (It had to be good publicity for him, too, right?)

BW:  The "issue" of the suit came from a book that was out at the time, "Snoopy And The Red Baron" and our record title, "Snoopy vs The Red Baron".  Thus the quandary and threat of a suit was over "AND" or "VS".  As I understand it, everything worked out well and Charles did like our records.  You're correct, he did renderings of us for an album "Snoopy and His Friends, The Royal Guardsmen".  I think our records helped with Snoopy's success, and much as it helped ours.  BTW, you're correct ... Baron Manfred von Richthofen was a real, and highly decorated, German WW1 fighter ace. 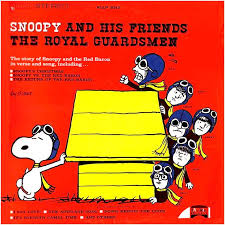