Cindy Birdsong (of the BlueBelles) makes her first "official" appearance on stage as a Supreme at The Hollywood Bowl in Los Angeles.  She will eventually be asked to permanently replace Florence Ballard, who would be terminated a few months later after missing too many performances and becoming increasingly unreliable.  (Ballard's bout with alcoholism was a large contributing factor to her unreliability.)

Top debuts on the chart this week include Aretha Franklin at #57 with "Respect", which will go on to become one of the biggest records of the '60's, her signature tune and a timeless classic, "Creeque Alley", a new one from The Mamas and the Papas, which premiers at #68, "Him Or Me, What's It Gonna Be" by Paul Revere and the Raiders, in at #71, first week on the chart, "Mirage" by Tommy James and the Shondells, debuting at #76 while their current hit holds on to a Top Five position and "Six O'Clock" by The Lovin' Spoonful, which premiers at #81.

Tommy James says writing "Mirage" came up quite by accident.

It was time to come up with a follow-up to their most recent smash "I Think We're Alone Now" and he, Ritchie Cordell and Bo Gentry were sitting around Bo's apartment trying to come up with something.

A tape of "I Think We're Alone Now" was accidentally put on the reel-to-reel upside down.  When it was played, it came out backwards.  When we heard the chord progression in reverse, our jaws dropped.  The song sounded just as good backward as it did forward!  Ritchie jumped up and said, "That's great!  Let's write it!"

Bo and Ritchie banged out a new set of lyrics and called the song "Mirage".  On the heels of "I Think We're Alone Now," "Mirage" was quickly released as the follow-up single.  This was followed by "I Like The Way", a mere eight weeks later.  This was an unheard-of release schedule, forcing radio on to the next single before the previous one had even peaked.  Incredibly, they did it.  All three singles went gold and by June, the "I Think We're Alone Now" album went platinum.
-- Tommy James

Tommy says that the real vindication came in knowing that The Shondells were no longer considered a garage band with "a fluky hit" ("Hanky Panky", which had topped the charts the year before.)

We now had a new sound that was uniquely ours.  The tight rhythms and the staccato eighth notes that we pioneered and used throughout the album became our signature sound.
Tommy 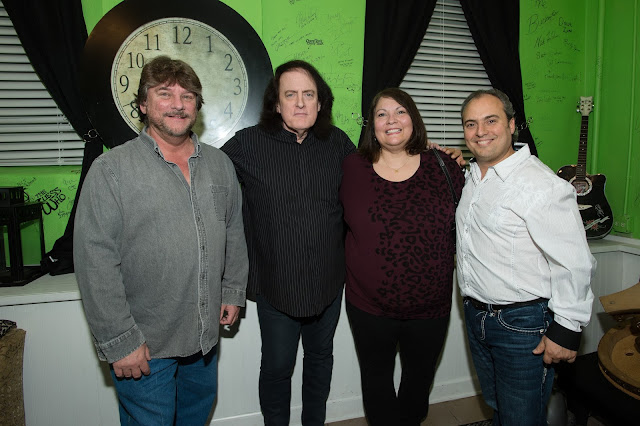 Me, Tommy James, Frannie and "The Hostest With The Mostest",
Ron Onesti backstage at his Arcada Theatre
Posted by Kent Kotal at 6:00 AM