Looks like "It's Your Thing" by The Isley Brothers wins the coin toss and becomes the new #1 Record in Chicago as The Top 4 records remain the same with the #1 and #2 positions changing spots.  "Mr. Sun, Mr. Moon" the latest hit for Paul Revere and the Raiders, completes The Top 5 this week.

Moving up six spots and into The Top Ten for the first time is "Don't Give In To Him" by Gary Puckett and the Union Gap.  The Beach Boys also move up six places (from #18 to #12) with their latest, "I Can Hear Music" ...  while "The Boxer" by Simon and Garfunkel, "Gitarzan" by Ray Stevens and "Earth Angel" by The Vogues all make impressive jumps of ten places or more.

Also on this date, Elvis Presley is awarded a Gold Record for his album "His Hand In Mine."  It is The King's second gospel album to earn this honor.

Also on this date, The Harvard University Administration Building is taken over by approximately 300 students (mostly members of The Students For A Democratic Society)

April 11th - Bobby Goldsboro makes a guest appearance on This Is Tom Jones.

April 14th – John Lennon and Paul McCartney record “The Ballad Of John And Yoko” at Abbey Road Studios.  They are the only Beatles present.  (John plays guitar and Paul plays bass, drums and piano.)  It's a remarkable achievement really ... for all the bickering going on at the time between the two, they pulled it all together for the sake of the music ... the thing that brought them both together in the first place ... and recorded a very authentic sounding '50's style rocker.  Banned in many cities across America, the single still manages to reach #7 on the US Charts.

[Check out The Monkees decked out in their '50's gear for the early rock and roll medley featured on the special!] 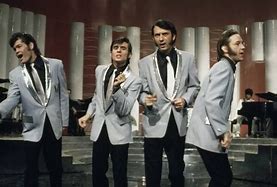 This will prove to be the last appearance of all four Monkees together until a reunion concert in Los Angeles in 1986 when Nesmith joined the other three on stage.  (Peter Tork quit the band after the television taping.)