We attended the "Good Time Rock & Roll" event at 115 Bourbon Street, a pillar promoting community involvement located in Merrionette Park.
The event served as a Fundraiser to help complete a documentary being filmed honoring Legendary DJ Dick Biondi.
When finished, it's destined for PBS and other outlets.
The successful day of non-stop music and never-ending buffet with an open bar was a result of the hard work of organizers Pam Pulice and Actor Joe Farina.  The MC for the afternoon was Scott Mackay from 95.9, The River.
Scott kept the event Rockin' and Rollin', introducing five talented local bands. The billing included The Hundred Dollar Quartet with Scott May of The Ides of March on keyboards, The Cavedwellers, The Meteors, Bagshot Row and The Southside Exiles.
Interspaced between performances of the previous bands were special performances by Ides of March / Survivor Founder Jim Peterik, Jay Reincke of Jay and the Americans and a well-received Dennis Tufano / Carl Giammerese reunion.
Peterik treated the overflow crowd to his classics "Eye of the Tiger” as well as "Vehicle."  Dennis and Carl took to the stage twice, reuniting to sing The Buckinghams’ classics "Kind of a Drag," "Hey Baby" and others. When MC Scott Mackay observed the length of time that had passed since they had sung together, Dennis quipped "We just had to get past one little restraining order."
Speaking of reunions, Jay Reincke reunited and played with his former group, The Meteors.  Jay began his performance with " Come A Little Bit Closer" before continuing with other crowd favorites.
Fundraiser monies were generated by way of opportunities for attendees to win a myriad of collectibles and other rock memorabilia via auction and raffle. A couple of the most interesting items included a jacket belonging to Paul Shaffer as well as a pair of his glasses.  A sport coat owned by Tony Orlando was auctioned as well.
Entertainment packages and memorabilia included autographed items by Tommy James,  Dick Biondi, Muscle Shoals, Tommy Boyce and many, many others as well as dozens of vintage 45's that were available for the right bid.
An entire 50's Kitchen and Rec Room with an Oldies Entertainment Center were also auctioned.
The Arcada Theatre’s and Onesti Entertainment’s own Ron Onesti said that he needed his passport to get from St. Charles to the venue on Chicago's southwest side.
Ron, along with Jim Peterik, served as event auctioneers … exuding the familiar Onesti / Peterik enthusiasm, the duo was instrumental in getting generous contributions for three special autographed event played guitars. Signatures included those of Peterik, The Buckinghams, the rock group Chicago, and many of the artists who had performed at Ron's classic Cornerstones of Rock concerts. Ron even added his own  personal Arcada Box Tickets with each winning bid.
During an afternoon filled with surprises, celebrated Chicago DJ and TV / Radio personality Bob Sirott stopped by to pay tribute to his friend and former colleague, Dick Biondi.
Upon completion of the auctions, Chicago Rock Pioneers, The New Colony Six, performed. Their appearance punctuated a fitting ending to a memorable tribute to the Legend who is Dick Biondi.
With documentary cameras rolling, the overflow crowd, prompted by a video of Dick, rose to sing "On Top Of A Pizza," footage from which will be used to close the film.
What a finale!
Jim Nowoc

Here is a short gallery of photos sent in by Jack Mongan, Jim Nowoc, Frannie and Pam Pulice … ENJOY!!! 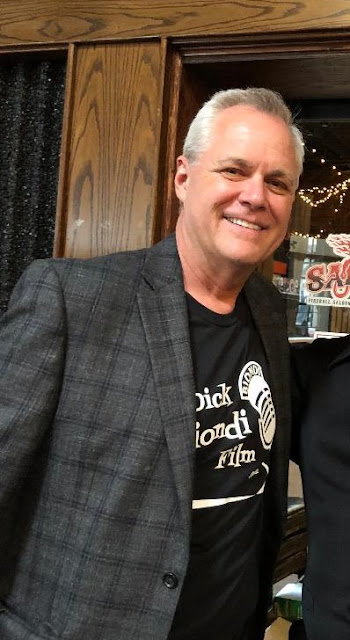 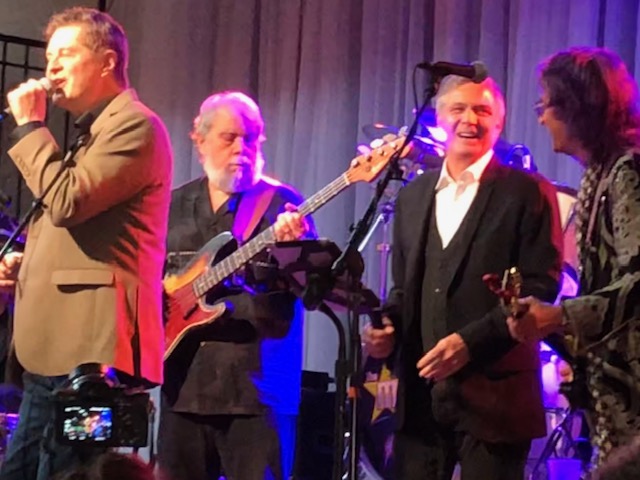 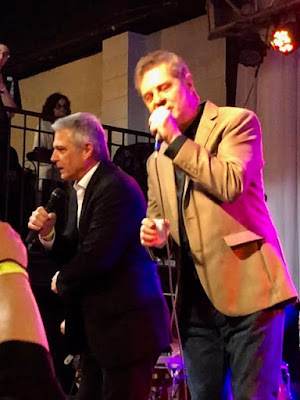 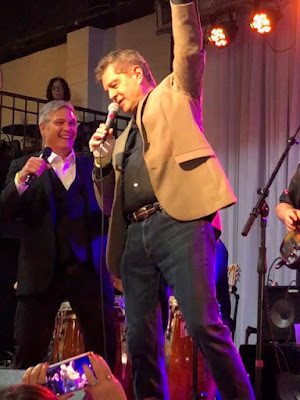 A couple more shots of Dennis and Carl ... 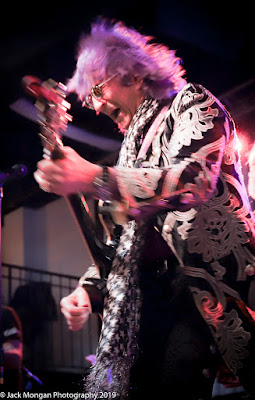 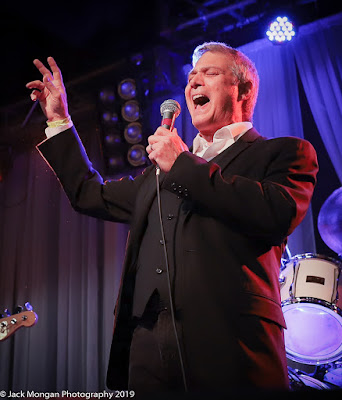 And then solo shots of Jim Peterik and Dennis Tufano 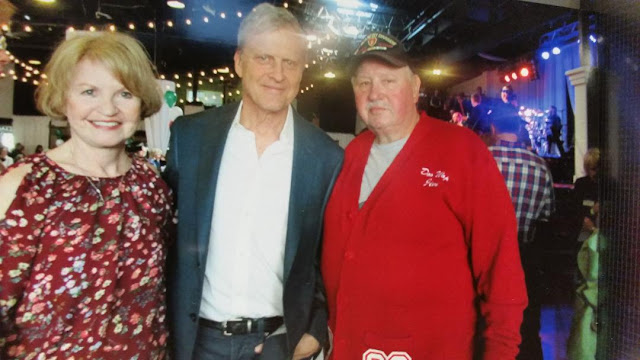 The legendary Bob Sirott, flanked by Sharon and Jim Nowoc 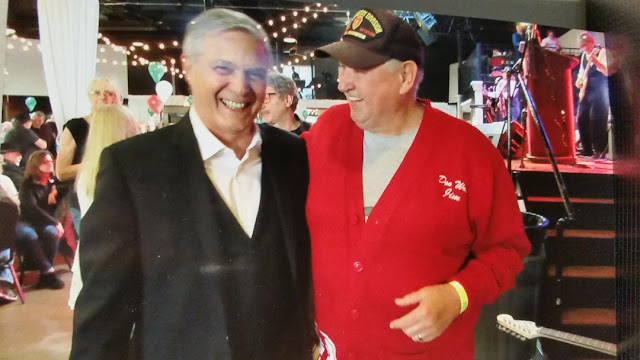 And then Jim and Dennis sharing a laugh 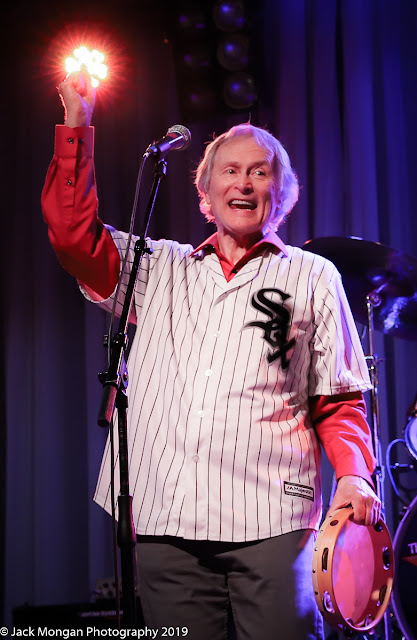 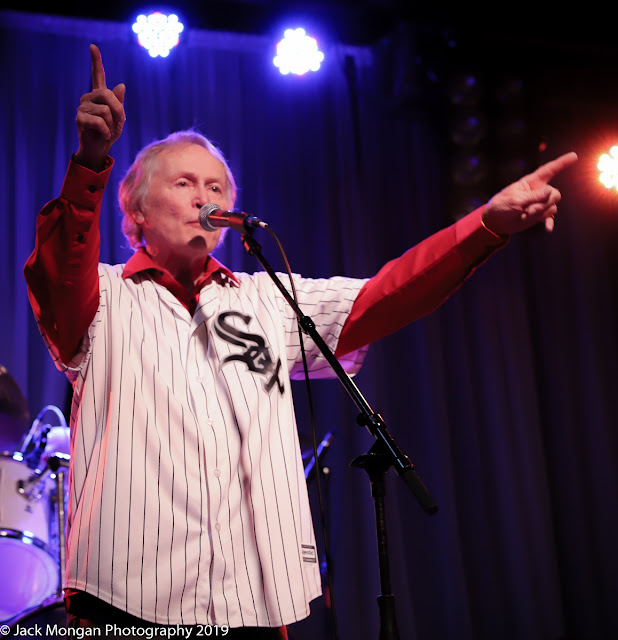 A couple of GREAT shots of Ray Graffia, Jr.,
leading The New Colony Six through their headlining set 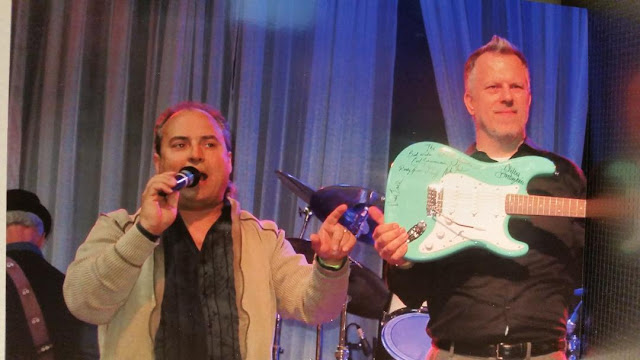 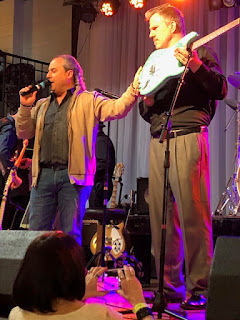 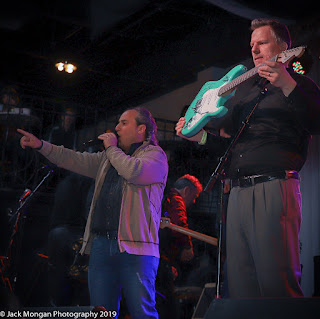 A few shots of Auctioneer Ron Onesti and Joe Farina,
drumming up a few bucks toward the film-making budget
This particular guitar is signed by all of the members of The Buckinghams
Guitars were also auctioned off signed by the
members of the rock group Chicago
as well as a special "Cornerstones Edition" guitar, signed by members of
all of the acts who perform during these sold-out appearances at
The Arcada Theatre ... (next show November 30th) ...
Jimy Sohns of The Shadows Of Knight, Jim Peterik and the members of
The Ides Of March, Ray Graffia, Jr. and Ronnie Rice of
The New Colony Six, Jim Pilster and Tom Doody of The Cryan' Shames
and the members of The Buckinghams 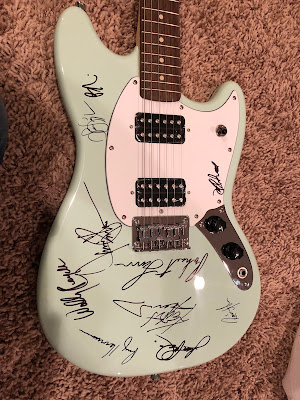 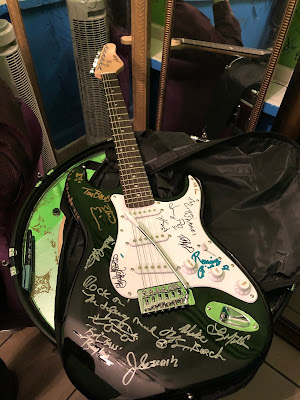 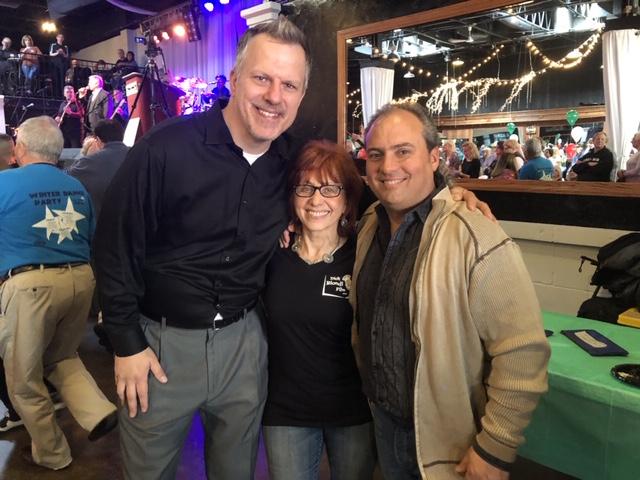 
Be sure to stay tuned for more details as to when the first complete cut of the movie will be available for screening!!!

Thank you all SO much for your on-going support!  (kk)