What's Wrong With This Picture? Tommy James Still Isn't In The Rock And Roll Hall Of Fame!

In what can only be described as a complete miscarriage of justice, Tommy James STILL has not been inducted into The Rock And Roll Hall Of Fame.

And as if that in and of itself isn't ridiculous and insulting enough, he's never even been nominated!

To put that into perspective, MC5 appear on this year's ballot for the FIFTH time.  (Seriously, there ought to be a three strikes and you're out rule when it comes to something like this.)  When compared to Tommy's career ... well, why even bother ... because there simply IS no comparison.  (MC5 charted one Top 100 Hit ... "Kick Out The Jams" ... which peaked at #82 in Billboard in 1969.  Tommy, on the other hand, has placed an incredible 33 songs on Billboard's chart ... and even that is a bit of an understatement ... as this list includes revolutionary and timeless classics like "Hanky Panky," "I Think We're Alone Now," "Mony, Mony," "Crimson And Clover," "Sweet Cherry Wine," "Crystal Blue Persuasion" and "Draggin' The Line," songs that helped to reinvent and define rock and roll.

Tommy belongs right at the top of our list of Deserving and Denied Artists that The Rock Hall continues to overlook year after year ...

And yet they've had his suit on display in their Cleveland Museum for YEARS  now ... 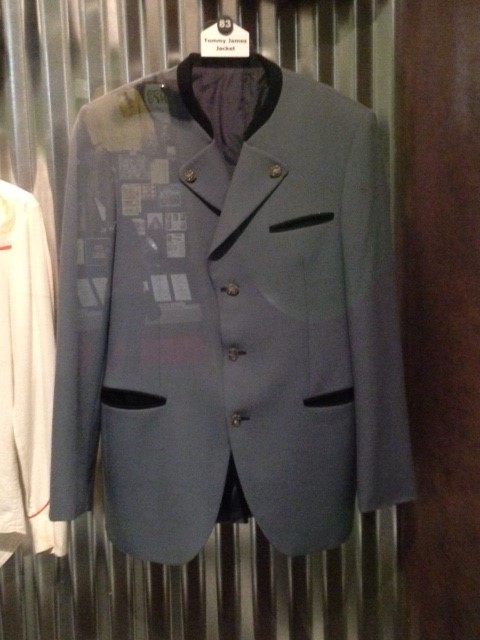 And invited him to perform there ...

Yet somehow have never found it justifiable to actually induct him???  (I would LOVE to know what criteria would disqualify him from such an honor ... since I can't think of ANYBODY more deserving of inclusion.  Maybe somebody at The Rock Hall or on the Nominating Committee can explain this to me ... because I'll admit to being completely baffled and bewildered.)

Tommy's music has crossed all timelines and genres ... after scoring massive hits on his own in the '60's, tracks like "Crimson and Clover," "Mony, Mony" and "I Think We're Alone Now" have reached the top of the charts again, two decades later, for artists like Joan Jett, Billy Idol and Tiffany.

His autobiography, "Me, The Mob and The Music" was a national best seller and is being made into a major motion picture.

He continues to play to sold out crowds from coast to coast, still wowing crowds with his incredible hits catalog and commanding and exciting stage presence.

And he's still writing, recording and releasing new material, most of which is every bit as good as it was some fifty years ago!

And yet he's never made The Rock And Roll Hall Of Fame Nominations Ballot.  It's ludicrous.

We recently heard from Tommy's long-time manager, Carol Ross, on this subject, and then from several other fans in response to her posting.  We'd like to review all of this with you again today.  (Tommy's not the only deserving artist to be continuously passed over ... several years ago when we took The Rock Hall to task for its failure to acknowledge artists worthy of induction, we actually came up with a Top 40 List of The Most Deserving and Denied Artists.)

How can anyone in the music business not think that TOMMY JAMES qualifies for the ROCK AND ROLL HALL OF FAME ... his music and influence has stood the test of time.
Please read below and pass this on.
Carol Ross, Manager
CRYSTAL BLUE PERSUASION, CRIMSON AND CLOVER, MONY MONY, HANKY PANKY, I THINK WE'RE ALONE NOW, SWEET CHERRY WINE, DRAGGIN' THE LINE, THREE TIMES IN LOVE and MIRAGE - just a few of the many hits - 23 GOLD SINGLES, 9 PLATINUM ALBUMS and over 100 MILLION RECORDS SOLD WORLDWIDE - 32 BILLBOARD HOT 100 CHART HITS.
Artists around the world have and continue to cover Tommy's songs - BILLY IDOL, JOAN JETT, BRUCE SPRINGSTEEN, CARLOS SANTANA, REM, PRINCE, KELLY CLARKSON, DOLLY PARTON, CHER, TOM JONES and even THE BOSTON POPS.
Tommy's music is featured in 60 FILMS and 53 TV SHOWS to date along with numerous commercials ... BMI lauded Tommy for his success with the presentation of a FIVE MILLION AIR AWARD for his music being played more than 21 million times on air.
Tommy's critically acclaimed autobiography ME, THE MOB AND THE MUSIC, listed on ROLLING STONE'S Top 25 Music Memoirs, is now in production for a film with producer BARBARA DEFINA, whose credits include GOODFELLAS, CASINO, CAPE FEAR, AGE OF INNOCENCE, SILENCE, THE GRIFTERS and YOU CAN COUNT ON ME ... she also produced MICHAEL JACKSON'S video 'BAD.'
The screenplay is being written by MATTHEW STONE, whose credits include INTOLERABLE CRUELTY and BIG TROUBLE.
TONY AWARD WINNER KATHLEEN MARSHALL just signed to direct - she received TONY AWARDS for choreography for the Broadway productions of ANYTHING GOES, THE PAJAMA GAME and WONDERFUL TOWN - she was also nominated for DIRECTING each of those musicals.
Tommy is now enjoying more success with his own radio show on SIRIUS/XM RADIO -'GETTIN' TOGETHER WITH TOMMY JAMES  - airing Sunday evenings, 5 – 8 pm Eastern on the 60s on 6 channel.
The prestigious NEW JERSEY HALL OF FAME inducted Tommy and his life size hologram can be viewed at the NJHOF EXHIBIT at NEWARK AIRPORT in New Jersey - Terminal C.
Tommy recently received THE PITTSBURGH LEGEND AWARD and THE JUKEBOX ARTIST OF THE YEAR AWARD.
Now entering his 51st year in the music business, he continues to tour around the country and Canada.
Follow him on Facebook, Twitter and Instagram -
For additional information and touring schedule check out his website - TOMMYJAMES.COM


Hey Kent,
Ms. Ross's letter is dead on.  Indeed, how is it even possible that Tommy hasn’t been elected to the R&R Hall of Fame?  It’s rather upsetting.
Something’s rotten in the state of the Rock and Roll Hall of Fame.
Paul Evans
Carol's letter to you about Tommy James is spot on.
He and Chubby Checker are at the top of my list of deserved performers who have been ignored by the people who vote for inclusion in the Rock Hall.  It is an embarrassment to what the Rock Hall does.
I have known and worked with Tommy for over 50 years and he is the consummate pro with all the credentials worthy of enshrinement.  I do not need to go any further.  The credibility of the Rock Hall is seriously in question. Clay Pasternack
Rocky River, Ohio

Hi Kent,
Yes Sir, another rich installment my friend.
Oh, I so agree with you about the suits ... they're so out of touch with reality. Tommy deserves to be inducted.  Look how long it took Paul McCartney ... I still can see his daughter's sweatshirt ... "About F***in' Time" ... lol.
IMHO, every corp has it's share of morons the we have to deal with ... welcome to 2019 ... lol
Hope you get a chance to slam down some high octane eggnog and chill a bit.
Merry Christmas, "mien friend". I appreciate all your hard work.
Take care Amigo,
Barry Winslow / The Royal Guardsmen

One of the silly little things that amuse me is how all this chatter about who should and who shouldn’t be in the Rock ‘n’ Roll hall of Shame, sorry, Fame (see how easy my fingers state that?) is the many people in it who wouldn’t know Rock ‘n’ Roll if it reared up and bit their arse.
I’ll state my case (of which I’m certain) …
Why the hell is Freddy the great Boom, Boom Cannon not in this shambles of an organization?
Oh, maybe I’ve answered the question myself and that is indeed the reason he has not been inducted.
Take care,
Rockin’ Lord Geoff (In England) 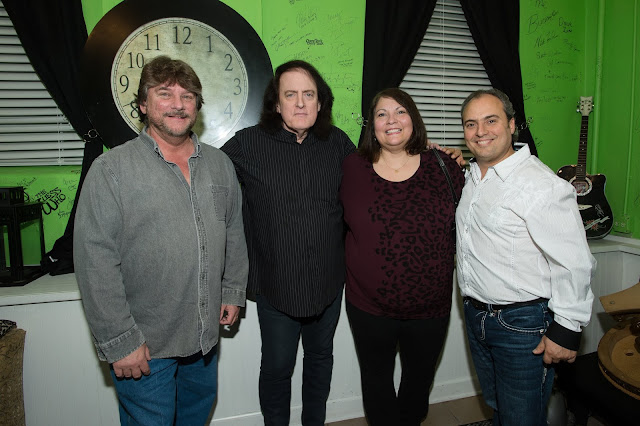 L-R:  Me, Tommy, Frannie and Ron Onesti, backstage at Ron's Arcada Theatre in St. Charles, IL, a few years ago
Posted by Kent Kotal at 8:09 AM