Classic Rock Lives On!
Thanks to a special Classic Rock Songs Discount offered on iTunes a couple of weeks ago, TWELVE Rock Classics have broken into The Billboard Hot Rock And Alternative Chart this past week.

Leading the pack was “Dreams” by Fleetwood Mac, which earned enough downloads to land a #7 showing on the chart.  (Incredibly, the song just experienced a resurgence after that whole Tik Tok skateboarding video thing went viral about a month and a half back … you’d think that by now, everyone who wanted it would have already downloaded it!!!)

Also reaping the benefit of this discount pricing program …

Bob Stroud featured The Beatles’ fourteen chart entries from exactly 57 years ago this week on his Rock And Roll Roots program this weekend, counting them down in order, just like we did earlier last week.  (He also stressed how different things were back then, what with having to actually leave your house to go out to a record store in order to BUY these singles in order for them to make the chart, rather than just clicking a link on your phone for an immediate download of not only an artist’s newest release but also, literally, their entire recorded catalog available at the push of a button.)

This is why the charts we grew up with (1955 – 1985) mean SO much more than the charts do today, where virtually ANY song … and EVERY song … can make the list if it earns enough downloads, streams or YouTube views.  I can’t even imagine what the charts would have looked like back in our day if this were the case … and it COMPLETELY prevents ANYONE from comparing the record of THIS era to that era in any reasonable reality … yet people who should know better, continue to do so.  What’s happening now isn’t “records being broken” … it’s an entirely new playing field and should be judged as such.  (This isn’t expanding the baseball season from 154 games to 162 … this is a COMPLETELY different set of ground rules.  Yet even Billboard continues to compare yesterday to today … and has even gone so far as to eliminate all of their Top Pop Singles Charts prior to 1958 when The Hot 100 started … in the process eliminating 32 of Elvis’ earliest chart hits!!!  It’s just wrong!)  kk

After last week supplying former WLS DeeJay Chuck Buell with a few clips of his intro/outro voiceovers for The New Seekers’ Coca Cola ad, we’ve now supplied reader Sam Ward with HIS most recent requests, those being Coke ads made for the Canadian market featuring The Guess Who and Bobby Curtola … as well as a couple of long-lost Four Seasons commercials.  (kk)

have been looking for for years now.  I have been trying to find both Bobby Curtola's and the Guess Who's mid-sixties Coke spots, and I figure that being from Ottawa, there's a good chance that he may have them.  So Kent, could you please give him my E-mail address, and that way, if he wishes to contact me, he can.

I am also looking for a 1966 Four Seasons commercial for Nupercayno cream.  I'm not sure that's actually spelled correctly.  Anyway, it's a Nupercayno cream sun tan commercial, and I have a very poor copy of the commercial on a July 1966 WMEX aircheck with Dan Donovan.  It's a microphone recording, and if anyone has a nice clean copy of that Four Seasons spot, that would really be awesome to get.  I have their Cousin Brucie theme on WABC, their Joey Reynolds theme on WKBW in Buffalo, and their Coke and Beachnut gum commercials with pretty decent quality.

Anyway Kent, again, you are really doing a truly amazing job with this blog and website.  (Sam Ward)

I passed Sam’s information on to Brad Howard and it sounds like they were able to exchange some vintage radio spots this past week.

In the meanwhile, we also heard from our old ‘60’s Garage Bands Buddy Mike Dugo regarding the Four Seasons’ spot … so all in all, a pretty good week for Forgotten Hits.  (And let’s not forget that we also helped to reunited ‘60’s Top 40 Disc Jockey legends Ron Riley and Johnny Holliday!!!)  kk

Thanks so much, Kent, for forwarding my E-mail address to Brad Howard in Ottawa.  We really hit it off, and he sent me a number of both Bobby Curtola and Guess Who Coke commercials as I had requested, plus a few others, and I sent him some of my earliest Coke spots from the fifties and early sixties.  I told him that these spots were a great early birthday present since my birthday is tomorrow, and it turns out that his birthday is April 7th.

Anyway, unlike so many people that seem to horde their material, Brad seems to have no problem in sharing his Coke spots with others.  He seems to be a real nice guy, and we certainly sent a bunch of E-mails back and forth on Friday, and the exchange was very fruitful for both of us.  Thanks again for passing my E-mail address on to him.

Hope all is well, Kent.

I saw Sam Ward's request for the Four Seasons Nupercainal (not Nupercayno) commercial spot. I'm not sure if mine is the same as what he has but I've attached it just in case. I've also attached several other Four Seasons jingles / radio spots, some of which are quite rare. Sam didn't mention the Brunswick bowling spot the Four Seasons did. I don't have it on my hard drive, but below is a clip of this track currently available on YouTube.

Collecting radio spots and jingles by '60s U.S. groups (primarily garage bands) is a passion of mine. I have over 12 full CDs of them and welcome connecting with others who also share this as a collecting interest.

In what I hope will be a reciprocal effort, I think it’s great that we can help to facilitate filling some of the holes in our FH collectors’ collections.  I’m always amazed by the fact that there will never be any such thing as a “completist” … as every time we turn around, there are more goodies to be had … and shared!  Thanks, Guys!  (kk)

Hi again, Kent,
Thanks, man.  This is truly awesome material … material that so many short sighted people would just throw away into the nearest dumpster once the time for these commercials has expired.  It is truly great that there are people out there that save this type of material.  After all, it's history!
Thanks again.
All the best,

I asked Mike Dugo which commercials were on HIS “want list” … and he sent me this list he’s been searching for … anybody out there able to help fill a spot or two???  (kk)

I have a HUGE want list of jingles but I know that most of the ones I'm looking for are likely lost to time. Here, however, are some by groups that Forgotten Hits readers should/might be familiar with (I have a much longer list that includes local bands of the '60s):

I know it's a LONG shot but worth a try. Thank you!

I saw the mention of WINS yesterday, so I had to toss this at ya.

Picked this up (darned if I can remember where) about 35 years ago.  It's a paperweight, 2 3/8" cubed.  Never saw another one like it.

By the way, that Four Seasons ad was for "Nupercainal," I belive, and not “Nupercayno,” from what I remember back in the 60s.
Mike Wolstein 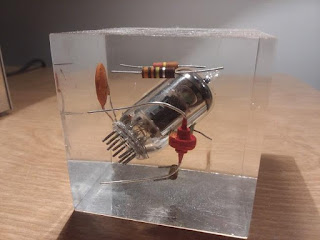 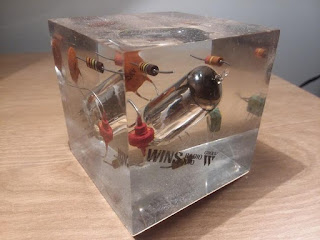 And one more for Chuck Buell …

I didn't get my prize!

Does CB stand for Canfield Boy?

Have you checked out the Phil Spector Series yet?

Stop on by for a few minutes and see what all the fuss is about!

They are Super People and I wish Pam good luck and Godspeed on the Biondi project.

Have a good weekend.

Enclosed is a bit of information from Wikipedia I thought you may find interesting:

Three Dog Night's original recordings were released by ABC Dunhill Records, except for 1983's It's A Jungle, which was released by Passport. In 1973,[citation needed] executives at ABC Dunhill (Jay Lasker is usually blamed[citation needed]) decided to discard all of their multi-track recordings and mono masters to save storage space in a cost-cutting measure.[1] As a result, all re-issues on CD have been remastered using album masters (sometimes from second or third generation tape[citation needed]), which often results in an inferior sound when compared to other catalogs of the era.

Well, it's interesting that as Georgia suppresses voting rights and my Atlanta Braves gave up the chance to host the All Star Game this year, here's an Asian American leading the Augusta Masters Golf tourney today.

Lots of fun laughing about it, but is it time to re-enact the Boyce & Hart "L.U.V. (Let us Vote)" campaign song 50 years later for a different reason?

Funny that in 1969 as Boyce & Hart toured the country recruiting teens to join their "Let Us Vote" movement to change AGE voting rights, they recruited teenage girls only for this sleeve below?? 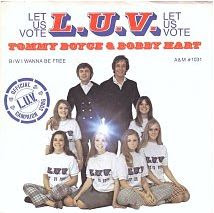 Just as with John Lennon's bed in, the cause may have been nice, but the songs were not very good.

With all the protests going down in Georgia, I heard that hot on the heels of The All-Star Game pulling out, even The Devil has decided to hold his Annual Fiddle Competition somewhere else!  (Thank you, Chuck Buell, for THAT one … I can’t believe it slipped thru the cracks a week ago!!!)

The Boyce and Hart track IS pretty awful.  (It never actually made The Top 100) … but we’ll run it again today … probably the first time since our Boyce and Hart series ran way back when!  (kk)

After hearing “Brown Eyed Girl” FIVE TIMES over the weekend, I decided to present another edition of songs “outside the box” that I heard somebody have the good sense to play this past weekend as well.  So here goes …

Not a day goes by that we don’t hear “Juke Box Hero,” “Cold As Ice,” “Urgent,” “Feels Like The First Time,” “Waiting For A Girl Like You,” “I Want To Know What Love Is” … and other well-know Foreigner tracks like “Long, Long Way From Home,” “Hot Blooded,” “Dirty White Boy,” “Head Games” and “Double Vision” all seem to be, if not in heavy rotation, certainly in regular rotation.

So it was a REALLY nice surprise to hear “Blue Morning, Blue Day” on The Drive the other day.

And here’s another one that we heard TWICE last week (after not hearing it again for AGES!!!)

But man, what a GREAT piece of pure bubblegum pop … I can’t believe this one didn’t climb even higher!  (kk)

You asked about those Cuff Links videos that I did not appear in.

The producers of the records decided to put a group together and have them go out on the road to promote future releases. They put together some talented musicians and singers and had them tour for a while.  They even did some local TV shows and that is where the videos come from.

I had my own solo deal with Don Kirshner and decided not be a part of the touring Cuff Links.

By the way, they are still working on getting the Happy Together Tour going for later this summer. Fingers crossed … Cant' wait to get back to live shows.

This has been such a tough year for musicians. l know when venues open up again, the fans will be back to support our music.

I’m sure working in the studio was far more lucrative, too, than being out on the road (not to mention MUCH less hassle!)

Ron was earning a great living as a jingles singer at the time … and had TWO Top Ten Hits simultaneously in 1969 as the “ghost voice” on The Archies’ #1 Hit “Sugar, Sugar” and as the lead vocalist on “Tracy” by The Cuff Links.  (And, he still got to sleep in his own bed every night!  Lol)  kk