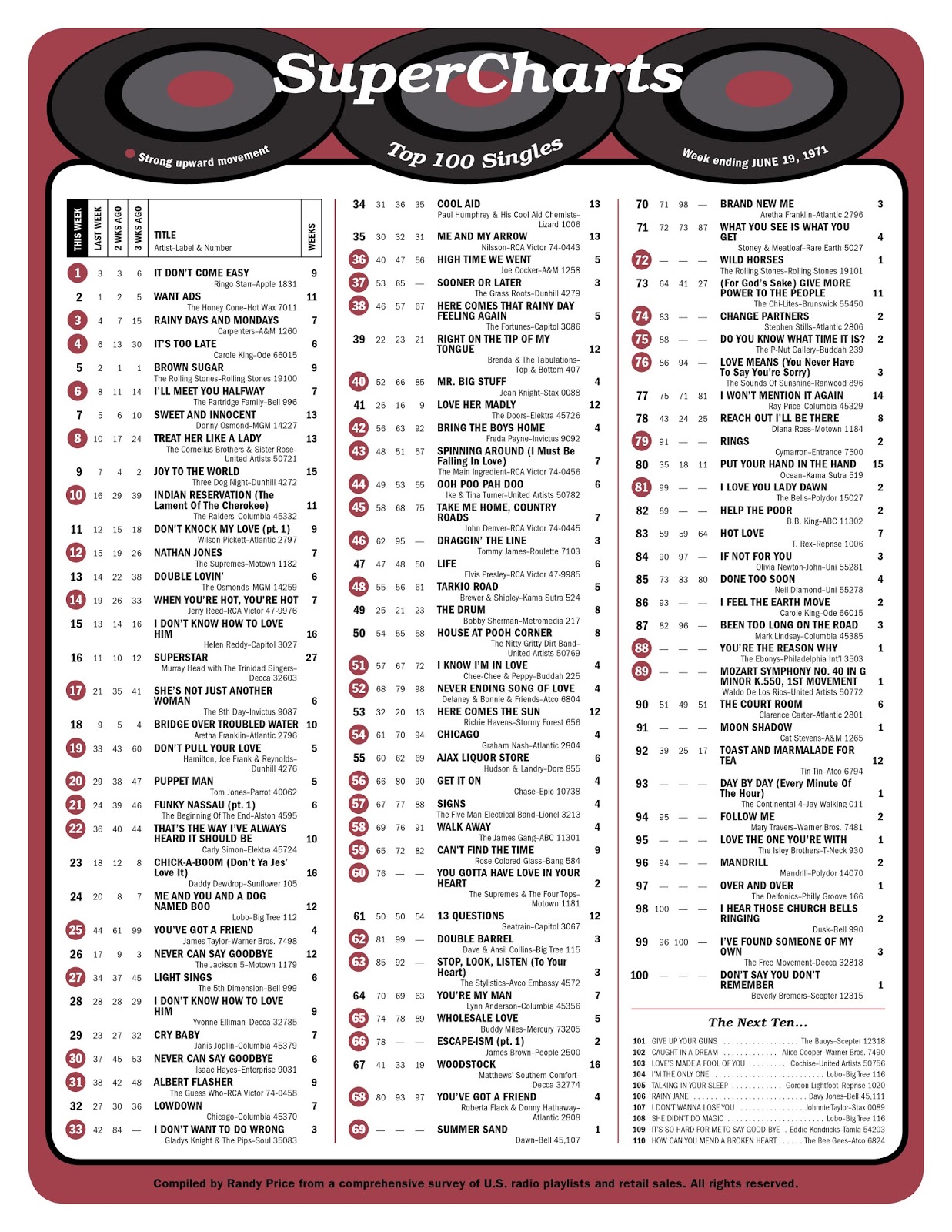 The Honey Cone can only hold on to the #1 spot for a week with their hit "Want Ads" ... as Ringo Starr pushes past them with his first big solo hit, "It Don't Come Easy," making Ringo the SECOND Former Beatle to earn a #1 Record.  (That in and of itself is quite an amazing statistic ... when one considers that for virtually the entire duration of The Beatles, all of the focus seemed to be on the hit-making songwriting team of John Lennon and Paul McCartney, it was quite the surprise that the far less likely George Harrison and Ringo Starr ended up with #1 Singles before either of the two band leaders did!)

Now some may argue, "How can 'It Don't Come Easy' be #1 ... it never hit #1 in Billboard" ... and you would be correct ... it topped out at #4 in Billboard Magazine ... but it DID hit #1 in both Cash Box and Record World ... and our Super Charts are based on the COMBINED showing of these records in the three major trades at the time.  This is why I have always maintained that The Super Charts are the most accurate representation possible of popular music at any given point in time as they take into consideration EVERY resource used by Billboard, Cash Box and Record World to compile their chart information ... and then combines ALL of this information into the most completely accurate chart possible.  This means much more retail operations included, much more accurate sales representation, several more radio stations and airplay stats being monitored ... and several more distributors and listener requests.  You can compare the charts of these three major trades side by side and get a pretty good picture of how music ranked at any given point in time ... but, far more often than you might think, you will also see discrepancies of 20 chart places or more.  The Super Charts PROVE what the most popular records REALLY were for any given week.  (And, quite honestly, "It Don't Come Easy" hitting #1 in two of the three major trades tells me that Billboard probably missed the ball on this one!  Kinda like "Dock Of The Bay" topping Billboard's chart for four weeks in 1968 ... but NEVER hitting #1 in either of the other publications ... makes one think that there had to be some bit of "favoritism" going on there!)

Meanwhile, there is only one new entry to The Top Ten this week as The Raiders' "Indian Reservation" climbs up six spots to land at #10.

Hamilton, Joe Frank and Reynolds have one of the week's biggest movers with "Don't Pull Your Love.  It climbs 14 spots from #33 to #19.  We're also seeing significant gains for Tom Jones' version of "Puppet Man," a hit last year for The Fifth Dimension and up nine places this week for Mr. Sock-In The Pants, while Carly Simon climbs another 14 spots with "That's The Way I've Always Heard It Should Be."  Carly's future husband, James Taylor, makes a move of 19 places with "You've Got A Friend" and The Grass Roots jump up 16 spots to break into The Top 40 with "Sooner Or Later."

Playing Favorites:
The new Rolling Stones single has been released now that "Brown Sugar" is slowly making its way down the chart after peaking at #1 a few weeks ago.  "Wild Horses" is a bit of a change-up for The World's Greatest Rock And Roll Band ... it premiers at #72 this week in 1971.

Cat Stevens is back on the chart with "Moon Shadow," one of those songs that ANYBODY able to play a guitar back then had to add to their repreitour.

And debuting in the #100 spot is "Don't Say You Don't Remember" by Beverly Bremers, one of the very first people ever interviewed for Forgotten Hits.  This one'll STILL stick in your head some fifty years later.

This Week in 1971:
June 13th – The New York Times begins to publish “The Pentagon Papers.”  The US Government immediately files a lawsuit to prevent these documents from being published.  The case will go to court two weeks later.

June 15th- The Guess Who earn a Gold Record Award for their “Best Of The Guess Who” album  (Chock full of hits … and yet these guys STILL aren’t in The Rock And Roll Hall Of Fame.)

Also on this date, Tupac Shakur is born.  (He will be shot and killed in a drive-by shooting in 1996.)

June 18th – Southwest Airlines (promoted as a “low-cost carrier”) begins its first flights between Dallas, Houston and San Antonio, Texas
Posted by Kent Kotal at 6:00 AM