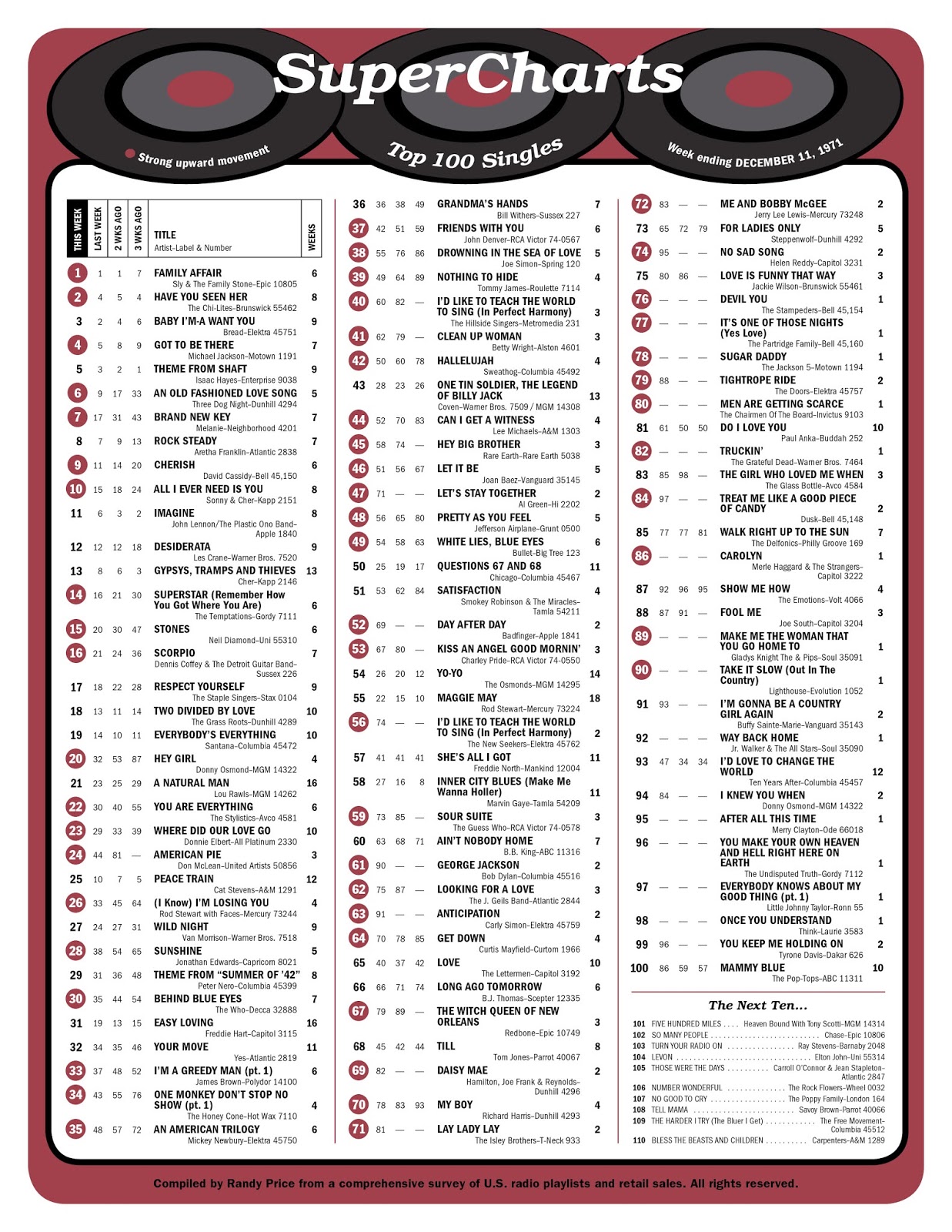 Sly and the Family Stone hold on to the #1 spot for a third consecutive week as "Baby I'm-A Want You" drops down a notch to #3, allowing "Have You Seen Her" by The Chi-Lites to slide into the #2 position.  (Could this be our next #1 Hit?)

Or will it be "Got To Be There" by Michael Jackson, which continues to climb the chart, this week moving from #5 to #4?

Then again, Three Dog Night's momentum has yet to slow down ... their latest hit, "An Old Fashioned Love Song" climbs from #9 to #6 ... and right behind it, Melanie's "Brand New Key" is up ten places from #17 to #7.  Finally making The Top Ten are David Cassidy's version of "Cherish" and Sonny and Cher's comeback hit, "All I Ever Need Is You."

Neil Diamond's latest, "Stones," continues to make an impressive run up the chart ladder, moving from #20 to #15 this week.  So does Donny Osmond's remake of "Hey Girl," which climbs a dozen spots from #32 to #20.

Keep your eye on "American Pie," too.  There is ALL kinds of buzz about the true meaning behind this song, which jumps from #81 to #44 to #24 in its third week on the chart.

"Sunshine" by Jonathan Edwards moves up ten places from #38 to #28 while Mickey Newbury's original version of "An American Trilogy" jumps 13 notches from #48 to #35.  This will become one of Elvis Presley's signature tunes in a couple of years.

Playing Favorites:
The Partridge Family have a new premier this week as "It's One Of Those Nights" debuts at #77.

And who would have ever figured that The Grateful Dead would be enjoying a pop hit?!?!  But "Truckin'" premiers this week at #82.

Other than that, it's pretty slim pickings this week in the way of new music showing up on the chart.

December 10th – Frank Zappa (who has been having one heck of a tough month!) was pushed in the orchestra pit during a concert in London England, by an angry fan who said that Zappa had been flirting with his girlfriend.  Zappa sustained a fractured skull, as well as a broken leg and ankle.  He would spend the next year of his life confined to a wheelchair and surgical brace.  (The week before he was performing at The Montreaux Casino in Switzerland when "some stupid with a flare gun, burned the place to the ground.”)
Posted by Kent Kotal at 6:00 AM