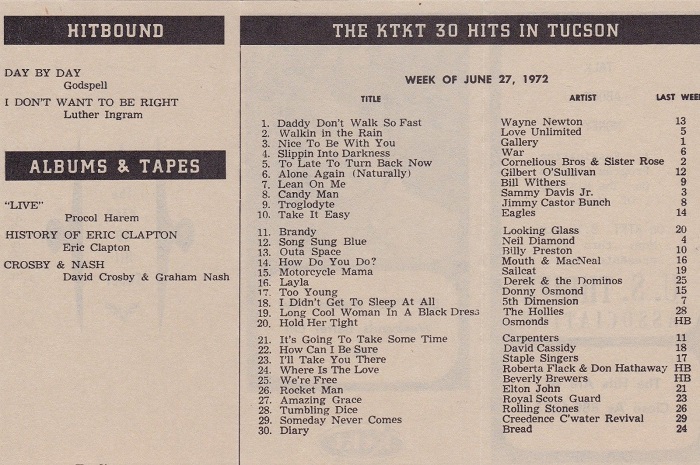 Just like last week's chart from Des Moines, Iowa, KTKT in Tucson, Arizona is showing Wayne Newton at #1 with his big hit "Daddy Don't You Walk So Fast" ... only here, it makes a GIANT leap into this position from #13 the week before.  (This seems to be a bit more reflective of the record's success than what was documented in Billboard, who showed it peaking at #4.  It topped both the Record World AND Cash Box charts nationally.)

Love Unlimited sits at #2 with "Walkin' In The Rain," a nice surprise.  (This one, too, topped out considerably lower in Billboard, reaching only #14 despite Top Ten showings in both Cash Box and Record World.)

Most of the other tracks seem to match up well with the charts we've been seeing for June of 1972, some just performing a little bit better than others during different weeks of the month.  (In fact, this week's Tucson chart could have almost served as the follow-up chart to last week's Top 30 from Des Moines!)

And don'tcha just love the heading Top "Albums & Tapes"!!!  Yep, that's the way we bought our music back then!