We ventured out for our first live show in about thirteen months this past Saturday Night (May 1st) to see Jim Peterik and Carl Giammarese perform at The Genesee Theatre in a special acoustic / storytellers show.  Seating was limited to just 25 tables for 2 at two sold-out shows, so social distancing protocol was appropriately in place and the atmosphere of the nicely decorated Cabaret Room was more that of a swanky nightclub than a rock concert venue.

Ironically, Carl mentioned during his set that his last live appearance had been right here at this same venue back in early March of 2020 when The Buckinghams opened for America in the much larger Genesee Theatre auditorium.  This was also OUR last live concert event before Covid shut down the entertainment world.

The show was arranged a bit differently than I had imagined …

I thought Carl and Jim would both come out together and just kind of trade off stories and songs from each of their respective careers.  (This IS Chicago Rock Royalty we’re talking about here!!!)

Instead, Peterik took the stage first, with Jim on guitar and his son Colin on keyboards.  Together they played a brief set of tunes that included the two hits Jim helped write for .38 Special (“Caught Up In You” and “Hold On Loosely”), what he described as a Dylanesque interpretation of Survivor’s “The Search Is Over,” The Ides Of March favorite “L.A. Goodbye” and a couple of others.

Then it was Carl Giammarese’s turn to take the stage, joined by long-time Buckinghams keyboard artist Bruce Soboroff.  Carl’s set offered much more in the way of storytelling than Jim’s did.  (At one point, he asked the crowd “Am I talking too much?” to which we responded with a resounding “No!”)

As you can imagine, some songs lend themselves better to acoustic versions and interpretations than others and, in this respect, “Hey Baby, They’re Playing Our Song” came up a little bit short for me.  But on the other hand, “Susan,” my all-time favorite song by The Bucks … and quite a complicated one at that when it comes to effects and vocals … sounded great, even in its stripped down form.

For the finale, Jim and Colin Peterik came back on stage to perform some of each band’s biggest, best-known and best-loved hits and, as you might expect, everything sounded much fuller when performed as a quartet. (I can only say that the drums played vividly in my head for these tunes!  Of course the addition of an electric guitar helped to liven things up a little bit, too!)  As we’ve done many times in the past, the audience provided the horn parts for “Vehicle” as the band ran through “Mercy, Mercy, Mercy” (with  great trade-off vocals between Carl and Jim), “Kind Of A Drag,” “Eye Of The Tiger” and “Vehicle.”  The show wrapped up with a version of The Beatles’ classic “I Saw Her Standing There.”

Because the room was committed to a very strict time schedule, we never had a chance to visit afterwards, as they did their best to clear things out straight away once the concert was over.  Likewise, because of social distancing protocol, there was no visiting at the merchandise table afterwards (although plenty of goods representing both artists were on display and available for purchase.)

I got the impression that Carl and Jim may do a few more of these “up close and personal” shows in the future … (I swear, Peterik would put every bit as much effort into performing a private show for two in your living room … the guy just LIVES to entertain!) … but hopefully a return to full band shows at more traditional venues and outdoor summer gigs are right around the corner.  (Carl mentioned that The Buckinghams … meaning in this instance, he and Nick Fortuna … will be part of The Happy Together Show scheduled to appear at The Genesee Theatre on August 7th.  It looks like this show is a complete sell out as well.)  Also on the bill are The Turtles (featuring original member Mark Volman and Ron Dante, who you can count on to also sing “Sugar, Sugar” and, if we’re lucky, “Tracy,” his hit with The Cuff Links), Chuck Negron (formerly of Three Dog Night), The Cowsills, The Association, The Vogues and The Classics IV.

Here are a couple of shots I was able to get at the start of the show ... 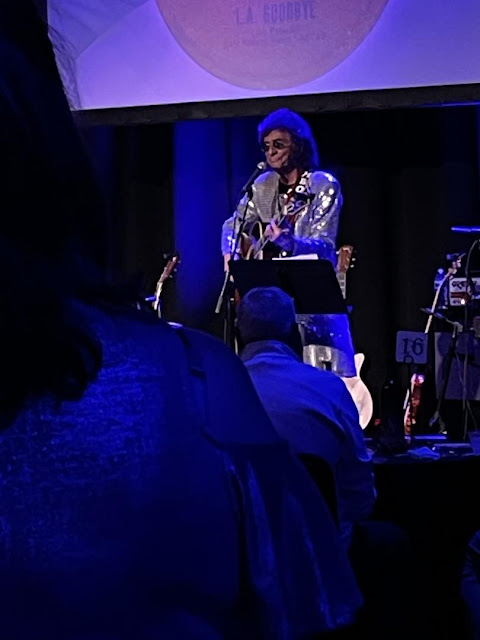 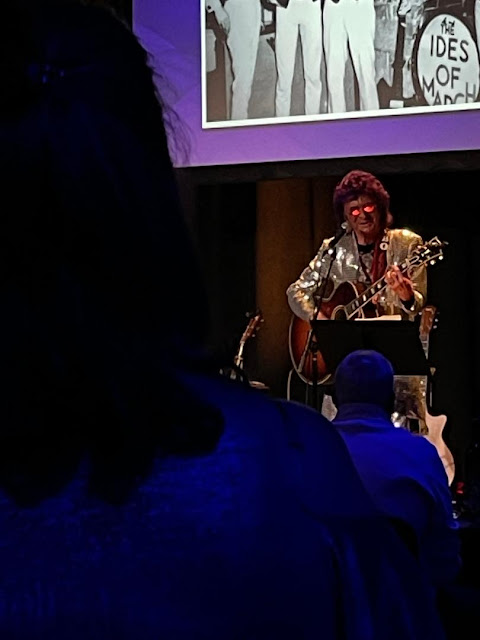 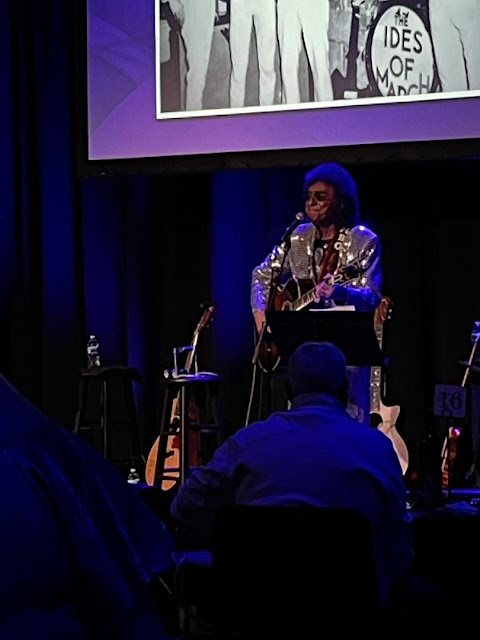 Frannie snapped some great pix at the show Saturday Night, too ... 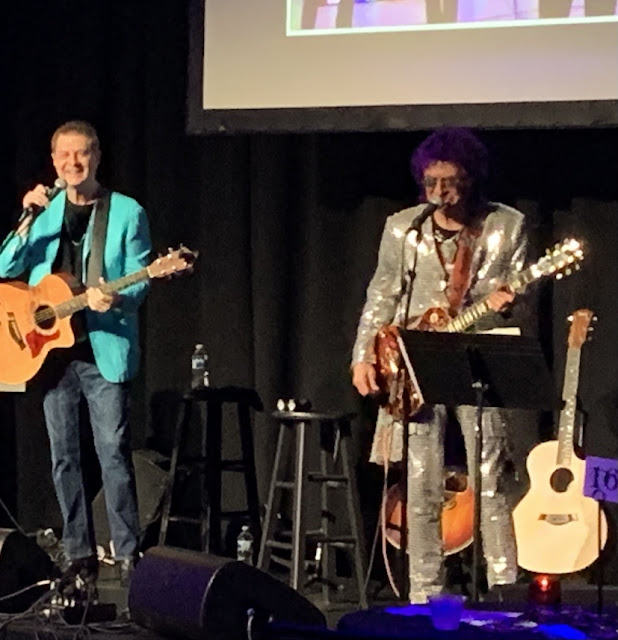 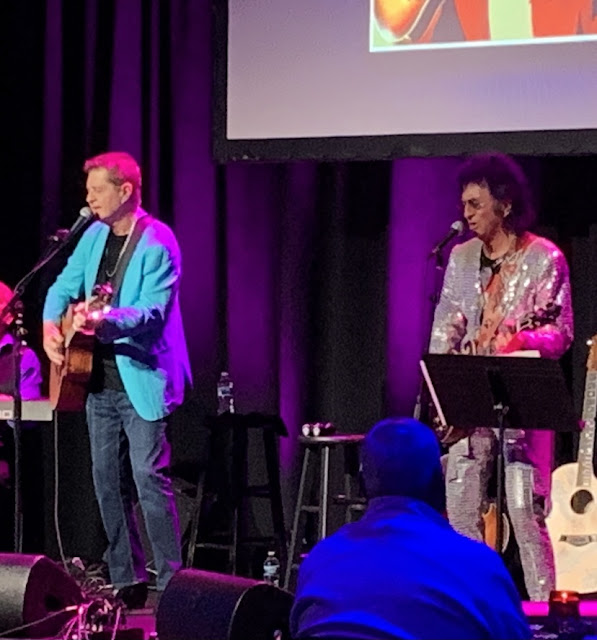 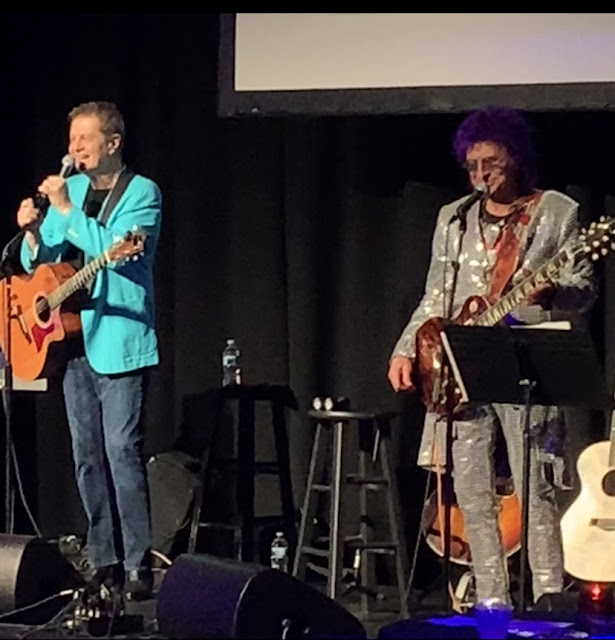 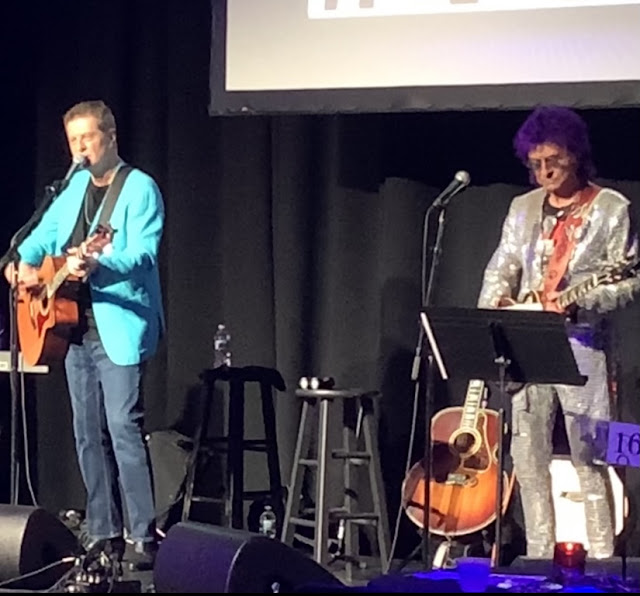 And then we got these from Jim's assistant, Chris May ... 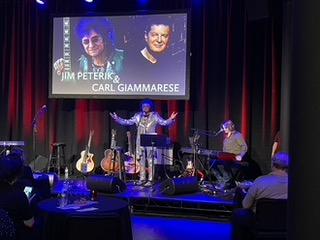 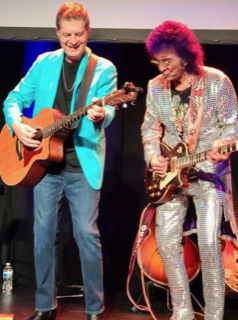 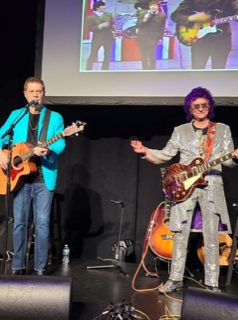 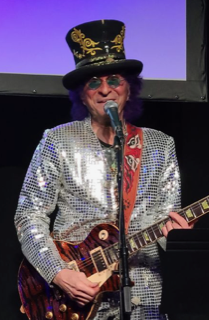 Before the show, Ides Of March member Bob Bergland asked that the audience “cut these guys some slack” because of their age.  (Both look EXTREMELY well for their age, I must say, even if Jim Peterik has gone prematurely purple!)  It seemed like the perfect lead-in for this photo sent in last week by former WLS DeeJay Ron Riley! 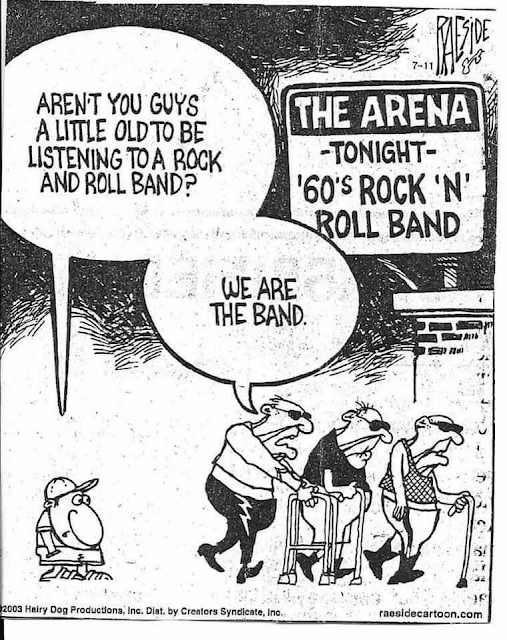