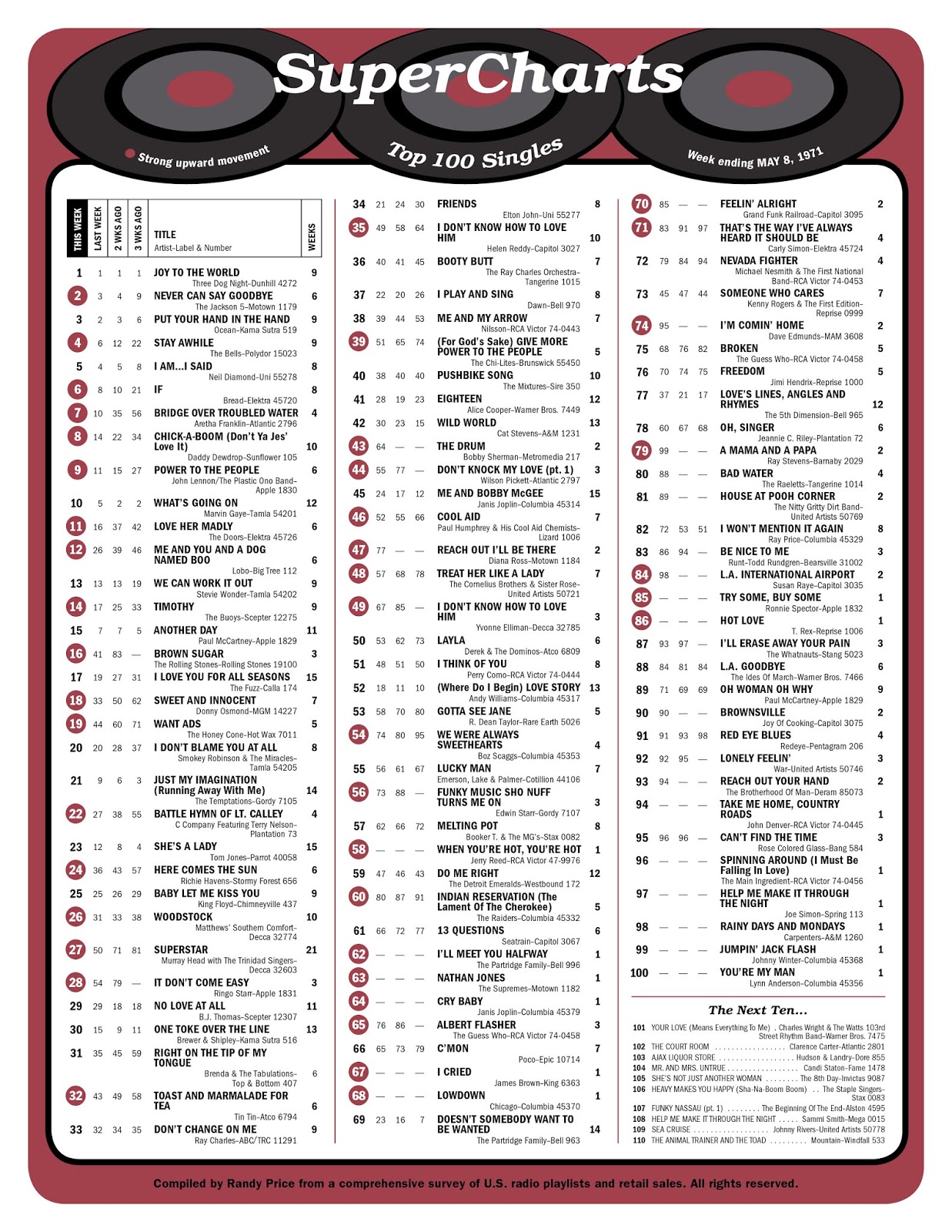 Three Dog Night log their fourth week at #1, holding The Jackson Five at bay as "Never Can Say Goodbye" continues its slow assent toward the top, moving from #4 to #3 to #2.  [SPOILER ALERT:  It never makes it to the top]

Meanwhile, Murray Head's reissue of "Superstar" (from the Broadway Musical "Jesus Christ, Superstar") ... technically now in its 21st week on the chart ... makes another major move from #50 to #27 this week ... while Ringo Starr comes up right behind it with "It Don't Come Easy," another potential #1 Hit, climbing from #54 to #28.

Also making big moves this week are "The Drum" by Bobby Sherman, last week's top debut, which jumps from #64 to #43 this week ... and the latest from Diana Ross, "Reach Out, I'll Be There," which climbs from #77 to #47 in only its second week on the chart.

Top debuts this week include "When You're Hot, You're Hot" by Jerry Reed, the follow-up to his surprise crossover hit "Amos Moses," "I'll Meet You Halfway," the latest from The Partridge Family (new at #62), "Nathan Jones," a new one by the Diana Ross-less Supremes, "Cry Baby" by Janis Joplin (who is suddenly a "pop star" thanks to her last big hit, "Me And Bobby McGee"), "Lowdown" by Chicago, "Try Some, Buy Some" by Ronnie Spector (Phil's wife), written and produced by George Harrison and released on The Beatles' own Apple Records label, "Hot Love" by a hot new band out of England called T. Rex (this one was a big hit here in Chicago a year before they caught on everywhere with "Bang-A-Gong"), "Take Me Home, Country Roads" by newcomer John Denver, who wrote the #1 Peter, Paul and Mary hit "Leaving On A Jet Plane" a couple of years ago, now scoring as a solo artist and "Rainy Days And Mondays," the latest in a string of hits for The Carpenters.

Playing Favorites (and Forgotten Hits):
"I'll Meet You Halfway," "Lowdown," "Hot Love" and "Take Me Home, Country Roads," one of those rare John Denver songs that I actually like!


BONUS:  You can read more about Phil Spector's Apple Sessions in our recently published Phil Spector Series ...
Most of this coverage can be found in Chapters 9 and 9A ...
https://fhphilspector.blogspot.com/2021/04/chapter-9.html
https://fhphilspector.blogspot.com/2021/04/chapter-9-a.html
This Week In 1971:
May 3rd – Grand Funk Railroad arrange for a press conference at New York’s Gotham Hotel.  (Despite their string of gold records, the press has never treated Grand Funk kindly … so this was their attempt to mend fences … and therefore “consented” to this press conference.)  150 reporters were invited to cover the event … and only six showed up!

May 6th – Ike and Tina Turner receive a Gold Record for their recording of John Fogerty’s “Proud Mary”
Posted by Kent Kotal at 6:00 AM