Remembering The Beatles on The Ed Sullivan Show

The Beatles on The Ed Sullivan Show ... I remember it as clear as day ... it had THAT big of an impact.  So many little things ... all the focus on their hair ... the insane crowd reaction of screaming girls ... the fact that my Dad had a really good friend named Bud Baehr ... and he looked JUST like George Harrison (only with a crew-cut ... because that's pretty much what EVERY guy wore back then!!!) ... and then, watching the show a week later to see if me and my brothers could pick out "the guy who looked like Bud"!!!  The "Sorry Girls, He's Married" imprint that flashed on the screen when the camera panned to John Lennon  (a tribute that Tom Hanks would later pick up in his excellent film "That Thing You Do".)  Walking home from school later that week with three girls who could sing ... word for word ... EVERY song on the "Meet The Beatles" album.  Going to my Grandma's house one weekend where she presented me and my two brothers with Beatle wigs ... and then all three of us putting the wigs on and bursting into an impromptu performance of "She Loves You", shaking our heads so vigorously and with such exaggeration that we ended up with headaches SO bad we all had to lie down for awhile later that afternoon!
By the time of The Beatles' first Ed Sullivan Show appearance, February 9th, 1964, "I Want To Hold Your Hand", "I Saw Her Standing There", "She Loves You" and "Please Please Me" had already hit the charts ... and their first "official" US album, "Meet The Beatles" was a week away from topping the charts, too ... being held at bay by (of all things!) The Singing Nun!!!  ("Meet The Beatles" would hit the summit the following  week ... and then stay there for the rest of February, all of March and all of April ... only to be knocked out of the top spot by "The Beatles' Second Album", which kept the string going for five more weeks!!!)
We'd never seen anything like it before ... and we haven't seen anything like it since. In hindsight it's almost impossible to believe ... just to think that it happened at all, let alone as incredibly FAST as it did ... worldwide Beatlemania literally exploded overnight ... but we were there and we saw it with our very own eyes!
(And it was AMAZING!!!)
For the week ending April 4th, The Beatles held The Top Five spots on The Billboard Hot 100 Pop Singles Chart:  "Can't Buy Me Love" (which had just jumped to #1 from a previous week debut of #27 ... both ... at the time ... Billboard chart records), "Twist And Shout" at #2, "She Loves You" (the previous week's #1 Record) at #3, "I Want To Hold Your Hand" still holding on at #4 and "Please Please Me" at #5.  A week later, The Beatles had FOURTEEN songs in The Top 100, adding "Do You Want To Know A Secret", "I Saw Her Standing There", "You Can't Do That", "All My Loving", "From Me To You", "Thank You Girl", "There's A Place", "Roll Over Beethoven" and "Love Me Do" to yet another record-breaking list! In all, The Beatles would chart an incredible 32 Titles on The Billboard Singles Chart in 1964 alone.
When you think back about ALL the acts that Ed Sullivan brought into our living rooms over his 23 year prime time run, it's inconceivable that he has never been so much as nominated for The Rock And Roll Hall Of Fame.  Hopefully this series will FINALLY shed a little light on this gross injustice.  (kk)

Kent,
Thanks for featuring a tribute to Ed Sullivan. I would have more money in my pocket if I had a dollar for every local, regional, or national artist that has told me that they got into music after seeing the Beatles on Sullivan.  I was very young, however, I remember my mother exclaiming "look at their hair" each time they were on.  Ed's friend Topo Gigio was what I liked to see at that age.  I remember being excited the first time I saw the Jackson Five appear.  While in high school I won the part of Mr. MacAfee in the musical Bye Bye Birdie and got to sing Hymn For A Sunday Evening (We're Gonna Be On Ed Sullivan).  While we had fake television cameras and a make believe set, I remember thinking how nervous the Sullivan  guests must have been to be on a show that so many people watched.
To me the Ed Sullivan show was a lot like Top 40 radio was in those days.  It was a variety show.  If you didn't like what you were hearing or seeing, you waited five minutes and something would come on that you liked.  You were exposed to so much entertainment and styles of music that many times you grew to appreciate.  It is not like today's ipod, me pod, TiVo, generation that we live in.
Ed Sullivan was often imitated but never equaled.  He does deserve to be in the Rock and Roll Hall of Fame.  I hope someday that happens.
Phil - WRCO 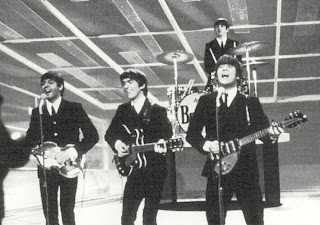 To me the two greatest memories I have was when Elvis Presley appeared and The Beatles.
I can definitely remember watching on those nights and I'll never forget it.
I can't forget comedians Jackie Mason and Will Jordan appearing on his show.
Then, in the Bye Bye Birdie movie, they put in an excerpt of The Sullivan Show for their home town. Those were the days. Other Sunday nights I watched The Steve Allen Show.
DJ Stu Weiss

Ed  Sullivan was like my window to the music world. Each week a new discovery walked onto his stage and into our living rooms. Even before The Beatles made their historic appearances on his show, I would watch with anticipation, and head to my 45 RPM record player in the week ahead reliving what I saw on Sunday night. I never appeared on The Ed Sullivan Show ... but like all of us here,feel an indebtedness to him, in the same way you would if he had something to do with our careers ... because in a way, he did have a to do with all of our careers.
Thank you Ed Sullivan.
Mitch Schecter / The Rip Chords

You have to consider that Ed Sullivan meant something different to us. It was TV when TV was completely different. It was just another hour's worth of what we took for granted back then. When we began watching it was live and just a camera pointed at everything from jugglers to operatic divas. For me, nothing registered very much. It was disposable entertainment, in one eye and out the other. It was a chance to see artists that we heard on the radio and that was it. No big deal at all. I do remember The Beatles and how we all sat and laughed at those goofy looking people with the long floppy hair, wondering what the fuss was all about and that was it. Never thought they would last, least of all attain the status they hold today.
Not much of a contribution, but it's the truth of what I lived.
Mister Hil

Most memorable Sullivans were The Beatles obviously & DC5. Also when Stones did “Paint It Black”. Honorable mention to Doors “Light My Fire”.  It was  mostly a Family night of TV, and memories of My Dad not caring one way or the other about the Rockers, and my Mother thinking they all looked like “Creeps”! Especially after the hair got long. Pretty Funny!
Ken

I, like many other 9 year olds, was aware of Ed Sullivan but didn't pay all that much attention to him prior to February of 1964. As a youngster, my family would watch him occasionally - especially in winter when we couldn't be outside at 7 pm on Sunday (Central Time is best, btw). We also enjoyed Ted Mack's Original Amateur Hour on Sunday afternoons. I was too young to see Elvis' early appearances on Ed's show, but enjoyed Topo Gigio and other interesting acts from time to time. In '63 "Bye Bye Birdie" also helped make me aware there was something special about Ed Sullivan. Everything changed on February 9, 1964 - just as it did for millions of Boomers. I sat spellbound in front of the TV the entire hour - and from that day forward I always kept up with The Ed Sullivan Show. I wonder if there's ever been another time in the history of broadcasting when the appearance of one act, or artist, had such a profound impact on the future of one program.
David Lewis 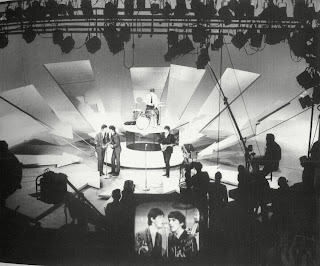 This may be a minority response to others you will get on The Beatles debut on The Ed Sullivan Show.  I definitely sat with my family each Sunday night and enjoyed the variety that his show brought to the world.  But on the first night of The Beatles appearance, my dad asked me if it was ok to watch another show that he was interested in, and I replied, "Sure!"  As I recall, I didn't even watch TV that night, but retired to my room to read another Nancy Drew mystery or listen to music.  You see, my friends and I could not understand the hype behind four "boys" who were a singing group.  "After all, Mom, they're just BOYS and I get bothered by enough of them already."  HOWEVER, at school the next day EVERYONE (even the staff) were talking about THE BEATLES on the Ed Sullivan Show.  So, the next week, my best friend and I decided to watch ... ONLY so we could participate in conversations in a knowing fashion.  AND THE REST, as they say, IS HISTORY.  Ed Sullivan had my eyes on each occasion he announced a popular singing group would be appearing.  Too young to attend concerts and not having an older sibling I could tag behind, THIS was my visual introduction to not only The Beatles, but The Dave Clark Five, The Rolling Stones, Herman's Hermits, The Animals, Freddie and the Dreamers, Petula Clark ... etc., etc., etc.
Thank you, Ed.
Shelley J. Sweet-Tufano


The complete collection of The Beatles' appearances on The Ed Sullivan Show is one of the best sellers in the series ... and it features EVERY appearance they ever made "live on our stage" ... in full-show format, complete with original commercials!  (If you watch their very first appearance, you'll even catch a very young pre-Monkee Davy Jones performing his role as "The Artful Dodger" in a stage presentation of "Oliver"!)  It's all there in all its original glory, BEAUTIFULLY restored footage that shows the earliest stages of Beatlemania as it hit the U.S.
Order YOUR copy here: