Two years ago today we lost one of the greatest voices in rock and roll history ... Johnny Maestro.

Maestro first found success with The Crests in 1958 when their very first chart hit, "16 Candles" soared all the way up to #2 on the pop charts.  It remained the biggest hit of his career ...

But in 1969 ... an incredible eleven years later ... Johnny made The Top Three again with a NEW band called The Brooklyn Bridge.  Their biggest hit, "The Worst That Could Happen", reached #3 that year.

Johnny continued to perform to sold-out crowds until health problems put him on the sidelines in 2010.  He was a regular fixture on many of the PBS Oldies Music Shows and, from what I've been told by countless fans, he never failed to please his adoring audience.

We recently told you about a brand new book covering the life of Johnny Maestro, written by Professor Irene Brodsky.  In fact, Irene was kind enough to give away an autographed copy of her book to the Forgotten Hits Reader who came up with the best "Favorite Johnny Maestro Memory".

The winner of our little FH contest is Nate Mehdi of West Palm Beach, Florida ... and an autographed copy of Irene's book is already on its way to him.

Here is what Nate had to say of HIS Johnny Maestro experience:


Some years ago I attended an outdoor Brooklyn Bridge Concert, sponsored by a local politician, at Mt. Lorretto Playground in The Bronx.  It was scheduled to begin at 7:30 pm but they started at 7 PM because of threatening weather.  At about 7:15  there was a lightning and thunder storms and they had to stop.The politician arrived at about 7:30 and saw that the act had changed into their street clothes and asked what had happened. Johnny explained that it was too dangerous to perform with electronic equipment under the existing conditions.  The politician threatened to stop payment on the check and asked Johnny to sing a few songs for the people.  John, Les, Freddie, Marty and Jimmy Rosica ... all in street clothes ... commenced to do an a cappella set that lasted about an hour.  It was one of the greatest concerts I ever attended!  It was reminiscent of back in 1956-7 when Johnny & the Crests, including Patrica VanDross, used to sing a cappella at the Henry St. Settlement House in lower Manhattan.  This was before they had recorded anything and John was still a student at Textil High School (now Charles Evans Hughes H.S.)  Everyone who heard them knew that John was destined for greatness.
I guess I had a proclivity for attending Brooklyn Bridge concerts in inclement weather.  One summer night I went out to John Burns Park in Massapequa, NY, but the concert was moved to a local school because of bad weather.  Due to limited seating, they were only allowing local residents into the venue.  I did not qualify and had to sneak in through a back door to see another memorable concert.
I was fortunate to attend  John's last public performance at Mohegan Sun Casino in Connecticut in January, 2010. Even though he was very sick at the time, he gave his usual excellent performance.
My favorite memory in watching and listening to Johnny for over a half a century is that he was a consummate professional who always gave a 100%.  In all those many years his voice never wavered and he never gave a bad performance.  Thanks for the memories John ... RIP.
Nate Mehdi 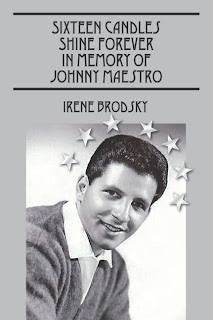 We heard from a few other Johnny Maestro fans who commented on the beautiful photo used on the cover of Irene's book.  Irene tells us:


The photo on the front cover was taken by Bruno and I had to search all the way to Australia to find the new owner of the rights to that picture so I could get the authorization.  That is why my book is precious to me.  It comes from my heart.

Irene also sent us an early picture of Johnny with The Crests, circa 1957. 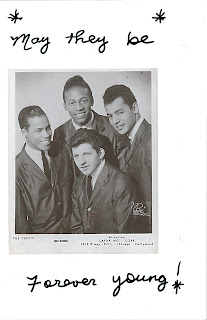 This attached image of Johnny And The Crests was taken by the famous photographer Popsie of NYC.  I am proud to have been given authorization to include it in my book.


My name is Professor Irene Brodsky and I want to thank everyone who entered the contest to win my new book "Sixteen Candles Shine Forever in Memory of Johnny Maestro".  I congratulate the winner, Nate Mehdi. And thank you, Kent, for this event for a lucky winner to win my book.  I am honored and I thank you.
I also want to thank anyone who was kind enough to buy the book.  Bless you from the bottom of my 65 year old heart.  And all of you can write to me at Chayarochel@aol.com  I would love to hear from all of you."
Love always,
Irene

Be sure to check out Johnny's two biggest hits in our Sound Advice Column today, too.  Just scroll down to the bottom of the web page to find both "16 Candles" AND "The Worst That Could Happen" as today's featured tracks. (kk)
Posted by Kent Kotal at 5:30 AM