Here's a question that's been circulating on our site for quite awhile.  While we've yet to reach a definitive answer, it looks to me like FH Reader (and researcher!) Clark Besch has some new (old???) information that sheds some light on this topic.  It ALSO appears that this has been a "hot topic" on another music website a while back ... we may have FINALLY found the answer!!!

>>>Kent, I have a question that I hope one of your many readers may help with.  It may be too "pop" - oriented and not "rock 'n' roll" - oriented enough for Forgotten Hits and, if so, fine ... just thought I'd ask. In the late spring / early summer of 1965, an instrumental called "A Walk in the Black Forest" by German jazz pianist Horst Jankowski made it to No. 12 on the Billboard pop chart.  I have since noticed that this same tune -- no question, it's the identical melody -- appeared on at least three episodes of  the "Perry Mason" TV show as background music.  (They are "The Case of  the Missing Melody" from September 1961; "The Case of the Absent Artist" from  March 1962, and "The Case of the Potted Planter" from May 1963.)
So -- how / why did this tune show up on "Perry Mason" long before it was a hit here?  Was Jankowski shopping the tune around for years?  Did  someone from the show hear the melody and buy the rights?  Was it a hit in  Europe before it was a hit here? I have checked the Horst Jankowski fan website (yes, there is one!), but this question doesn't seem to be addressed  there.  Thanks!    (Henry McNulty, Old Saybrook, Connecticut)


>>>Hi Henry!  Yes, I'm VERY familiar with Horst Jankowski's recording ... had the 45 at the time and have featured it as part of Forgotten Hits a few times over the years.  (It recently made our "All-Time Favorite Instrumentals" List and we also included it in our very special "Walk ... Don't Run" Marathon Weekend a couple of weeks ago!)  In fact, I seem to remember even running photographs of the original sheet music for this tune for some reason or another!  But I was NOT aware of any Perry Mason tie-in, so let's put this one to the list and see what they come up with.  "A Walk In The Black Forest" was a #3 Hit in Great Britain ... but that was in 1965, too ... so that doesn't seem to be the reason.  Anybody else out there got any ideas?  (kk)


>>>The funny thing is, I found these comments for the same reason Henry McNulty made them. I saw a rerun of Perry Mason (hooray for MeTv!) from 1961 that featured the tune I know so well as "A Walk in the Black Forest." The thing is, I also had heard the same tune -- it's unmistakable, as you know -- in a Twilight Zone episode called "Cavender Is Coming" from September, 1962. (The episode starred Carol Burnett but is otherwise pretty awful.) I saw the TZ episode before I saw the PM show and wondered even then how this song, supposedly from 1965, ended up in a show from three years earlier. The PM episode reminded me of that question, and a Google search brought me to you.
Did you ever get any more information on this? I've searched and haven't found anything. I guess the only possible explanation is that Jankowski wrote it -- he does seem to have been the composer, not just the guy who made it famous -- several years before the song became a hit. As Henry said, he must have shopped it around for a while, and the tune is so catchy, it got picked up here and there until it finally caught on in '65.
I'm pretty sure the versions from TZ and PM are not the same as the one that became a hit and have no idea if they were Jankowski himself playing.
Just a trivial bit of music trivia, but I thought you might be interested. Sorry for the long e-mail!
And by the way, it's great to see that you appreciate the easy listening instrumentals from the 60s. I was born in 1957, so songs like "A Walk in the Black Forest," "Walk, Don't Run," "Cast Your Fate to the Wind" and the entire output of Herb Alpert and the Tijuana Brass were the background music to my childhood.
Keep up the good work!  (Steve from Pennsylvania)


>>>I have all the Perry Mason episodes on DVD and taped them from WTBS in Atlanta back in the 1980's  This song showed up in a few episodes.  I had seen Horst's name in the international section of Billboard a number of times previously to 1965 when the song was a hit.  Apparently for whatever reason the song became a hit at that time, but Jankowski was a very well known musician in Europe in the late 1950's and early 1960's    I have a couple of sources to try to find out the root of this, but, I am guessing that this song WAS shopped to various TV shows for a number of years.  The best source of this would be anyone associated with the Perry Mason TV show (who have all probably passed away by now) and anyone in the higher up level of Mercury Records during 1964-1965 who would know where it came from.  As with the Perry Mason show, most of those people have probably passed away. Finally, Billboard and Cashbox 1964-1965 may have some info in the international area (when I have some time, I can research that!  (CLAY PASTERNACK)

Kent,
My friend Ed Heine, originally from Nebraska, was a Warners Bros. exec in Germany, so I passed your FH buddy's queries about Horst Jankowski's song on to him.
Here's his helpful response!
WLSClark

Hi Clark -
Good to hear from you again.  I had time to give your email some thought and do some research.
Coincidentally, I was the head of the German Warner Bros. publishing company who owned the publishing rights to ”A Walk in the Black Forest”  (Original title:  "Eine Schwarzwaldfahrt”).  We acquired the song when we bought Chappell Music in about 1988 and became Warner Chappell Music.  The problem is that the story behind the song pre-dates my time at the company and certainly pre-dates everyone who now works there.  Normally, the music publishing company would be the place to get the real story behind any usage of the song because it is the publishing company who negotiates and issues a license for every use -- whether it be a recording, a TV or radio spot, a use in a TV or radio program or a motion picture.  As I said (or wrote), however, there is nobody left at the company who could shed much light on anything that happened in the sixties.  Also, there were no computers at that time, of course, and the original files have probably long since disappeared.  Nevertheless, each piece of music used in a film or TV program is listed on a ”cue sheet” which gives the name of the composer and length of the music use. These cue sheets are registered with BMI and ASCAP and are most certainly in their computers, e.g., Episode 32, Perry Mason, 2:20, Horst Jankowski.  Often, the title listed is along the lines of ”Perry drives in his car”, etc.
Theoretically, the publisher and Jankowski’s heirs continue to receive performance fee income for the re-runs of Perry Mason -- if Jankowski's music was indeed used.  That information would be apparent on the royalty statements but would, of course, be confidential.
I did a lot of research on the internet but could find nothing indicating that Jankowski recorded any version of the song prior to 1964 although he was a respected jazz musician before then and had released a couple of albums before 1964.  I checked on the websites of BMI and GEMA (the German mechanical and performing rights society) and found a few other names for the song but they did not list the registration dates.  I eventually found a German obit for Jankowski in a Berlin newspaper saying that he originally wrote the song as part of an advertising campaign for a Black Forest promotion film in 1962 but could find no confirmation.
Anyway, I finally pieced together enough information to enable me (by accident, I suppose) to put the right words into Google and find what appears to be the closest answer we’ll ever get to the question:  http://mudcat.org/thread.cfm?threadid=99605&page=2
Apparently the same question was covered in a 2007 blog discussion on a British site.
Best regards,
Ed

And from that link, comes this telling piece of information ...

I found out that "A Walk in the Black Forest" was composed by Horst in 1962 i.e. three years before becoming a hit!

Other information says that this melody was composed by Horst at the beginning of the 60's for promotional purposes (commercial / advertising / movie). Although the special kind of this campaign is not stated it appears that Alec's memory serves him extremely well. And yours too, FC.

For a publicity film Jankowski composed the catchy tune “a Black Forest trip” at the beginning of the 60's, which became in shortest time and for general surprise - to the international instrumental - hit and provided for Jankowski world-wide fame.
Last but not least,for those interested in the German lyrics of AWITBF I can offer this example without knowing when and by whom it was written:

With reference to your question as to whether Horst Jankowski's "A Walk in the Black Forest" was ever used as a theme tune by the BBC, I very much doubt this, based on the following relevant information, that I have taken directly from an interview which Horst gave to WDR, a radio station in Germany.
"I had originally written that tune as "Eine Schwarzwaldfahrt" in 1961 for a radio show. It was a travel programme and I recorded a couple of tracks about famous places like, Paris, the Alps and that kind of thing. "Eine Schwarzwaldfahrt" was about a beautiful trip through Germany's Black Forest. It became successful in America first, in 1964, three years after I had recorded it. The whole story is a very unfortunate part of my career. In the sixties American producers were coming to Europe to buy music for TV shows."
"This was much cheaper for them than producing it at home since here they didn't have to pay musicians and the union. I sold them four tracks from the radio programme, including "Eine Schwarzwaldfahrt" and they paid me 125, - Deutschmarks, which seemed OK at the time. I signed a piece of paper and started work on something else. We musicians were pretty stupid back then. Not long after that, my song was used in an American TV show, and became a huge hit there under the title " A Walk in the Black Forest". It was only then that I realised what exactly I had signed. I wouldn't get any royalties, all rights were owned by an American company. It took me seven years, several lawyers, and lots of money to get the rights back. After seven years, of course, the song was no longer a hit and didn't even make back the money I had spent on the lawsuit. Although I went on to sell lots of albums, I didn't make a penny from "Black Forest!"
So, there we are then Peter, there is no mention of England or the BBC. On the contrary it would seem that "A Walk in the Black Forest" was in fact used for an American TV show!!
I hope that this information helps to answer your question. 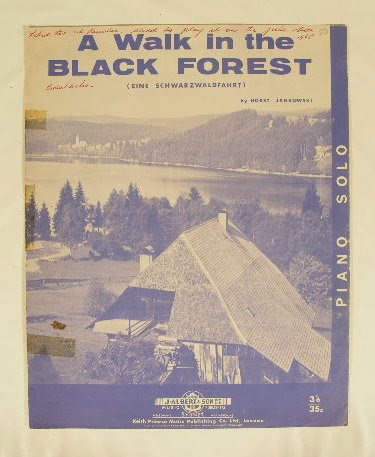