Who Played The First Beatles Record In America?

Without question, one of our most popular features over the past fourteen years has been our expose "Who Played The First Beatles Record In America", a piece that first circulated back in 2001 as part of our '60's Shop / Forgotten Hits email newsletter.

Since then it has grown in stature and become an oft-quoted source of information.  (It was really our first truly in-depth research project ... and helped to set the standard of what we were trying to achieve with Forgotten Hits.)

So imagine my surprise when I received this email from a guy who discovered our website for the very first time last week ... but raised his OWN inquiry into this historical event way back in 1984!!!

Below is a bit of that exchange ... as well as the coverage he received in Beatlefan Magazine at the time.

Wow! I had NO idea!  And how cool to find out once again that our own research bears out correctly as well.

Hello,
After looking through my collection of WLS Radio's Silver Dollar Surveys, particularly the one from March 8, 1963, with the Beatles as number 40, I wanted to check the status of the "who played the Beatles first in America" and found your website.  In 1984 I wrote to Beatlefan magazine concerning this.
They published my letter and there was a great response in the next issue.  I am enclosing the letters in the event you want to included them in your article.
Patrick Sullivan

I'm blown away by the fact that somebody was already looking into this back in 1984 ... some 17 YEARS before our series first ran!!!

It was a question I wanted a definitive answer to as well ... and, while I had my own suspicions that our very own Dick Biondi and WLS Radio were most likely the first (based on the very same Top 40 Silver Dollar Survey charts that you referenced in your letter to Beatlefan Magazine), I wanted to unequivocally document proof to that effect.

Growing up in Chicago (I've lived here my whole life), it was important to me to be able to give Dick Biondi (who I was fortunate enough to interview as part my original research piece ... and who has been a MAJOR radio fixture here for most of the past fifty years) ... his due for this rare achievement.  (As we all know, playing the record meant absolutely nothing at the time ... it went absolutely nowhere and, until "I Want To Hold Your Hand" launched Beatlemania here in the States nearly a year later, it seems that NOBODY at that time cared about some "long-haired singers from Liverpool".)  Boy, were we in for a shock!

Funny thing ... memories either seem to fade ... or embellish ... over time ... but the plain and simple truth is there was NOTHING memorable about "Please Please Me" when it was first released here in The States in February of 1963 ... but it IS nice to know that our local big-wig Top 40 Radio Station did their neighboring local record label Vee Jay Records a favor by spinning their latest release on the air ... even if it did drop off the chart a week later!

So congratulations and thank you to both Patrick Sullivan (for asking the question) and Beatlefan's Shawn Fulper-Smith for doing the research ... you guys are my new Beatles heroes ... let me return the favor by helping to spread the word!!!

Hi Kent,
I also grew up in Chicago and have great memories of visiting the WLS studios in the Stone Container building and the WCFL studios in Marina City.  I had a band "The Rage" and WCFL sponsored a show with the Rivieras at Inn Motion at 59th & Kedzie and we were the opening act.  I have a copy of a commercial they ran and hearing our name mentioned on the radio was so cool. We were invited to visit with Jim Stagg at their studios.  Also when I was stationed in the Army at Fort Polk, Louisiana in 1968, half of my company was from Chicago and half from Texas.  At night we could listen to WLS with their 50,000 watts.  A guy from Chicago owned the radio.  We also used to hang out at the WYNR studio near 87th and Kedzie and run for coffee or food for the DJ's.  I've got one of their top 40 surveys from July of 1963 and a copy of their "in-house only'  instant top forty.  Those days were so much fun.
Pat 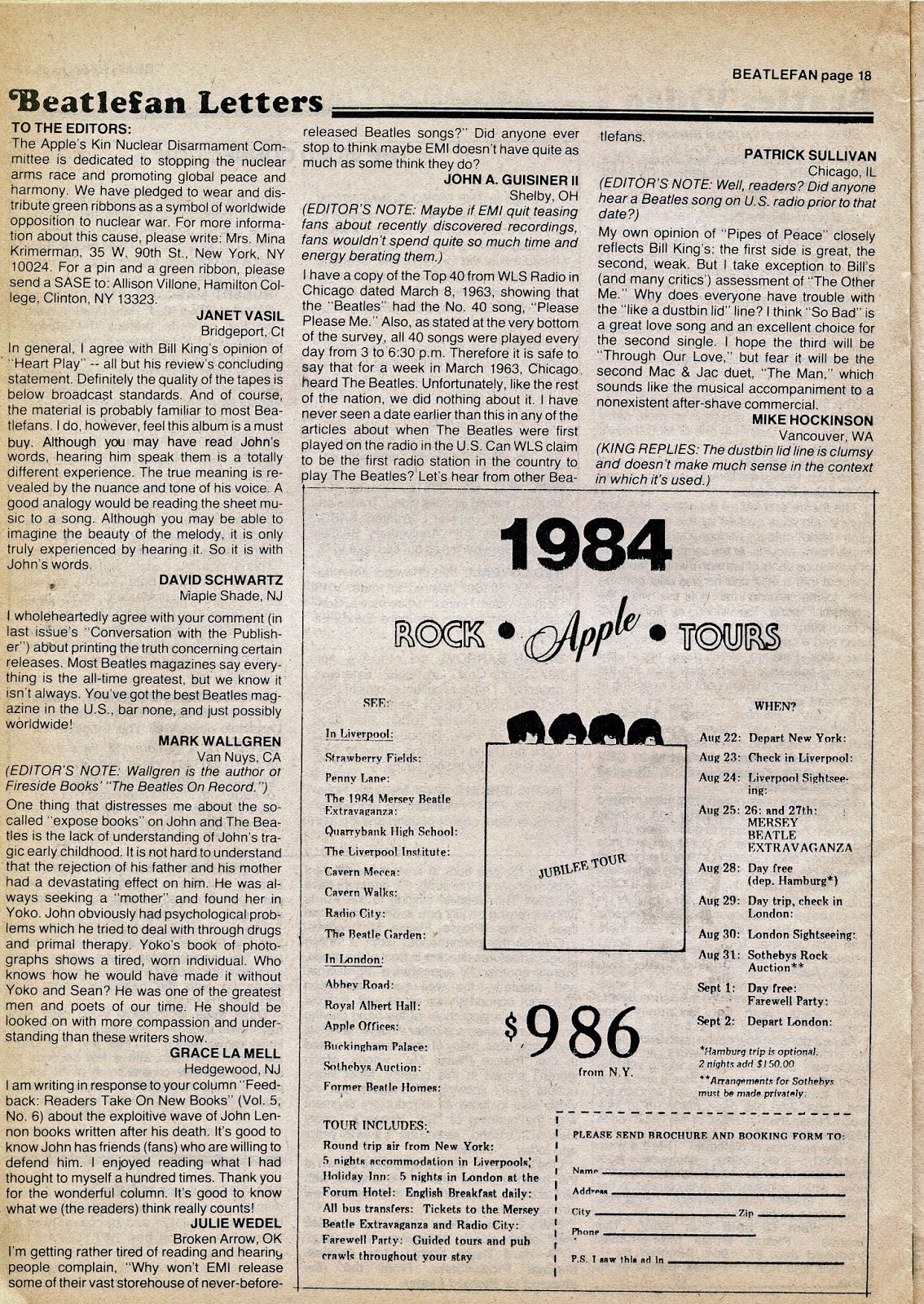 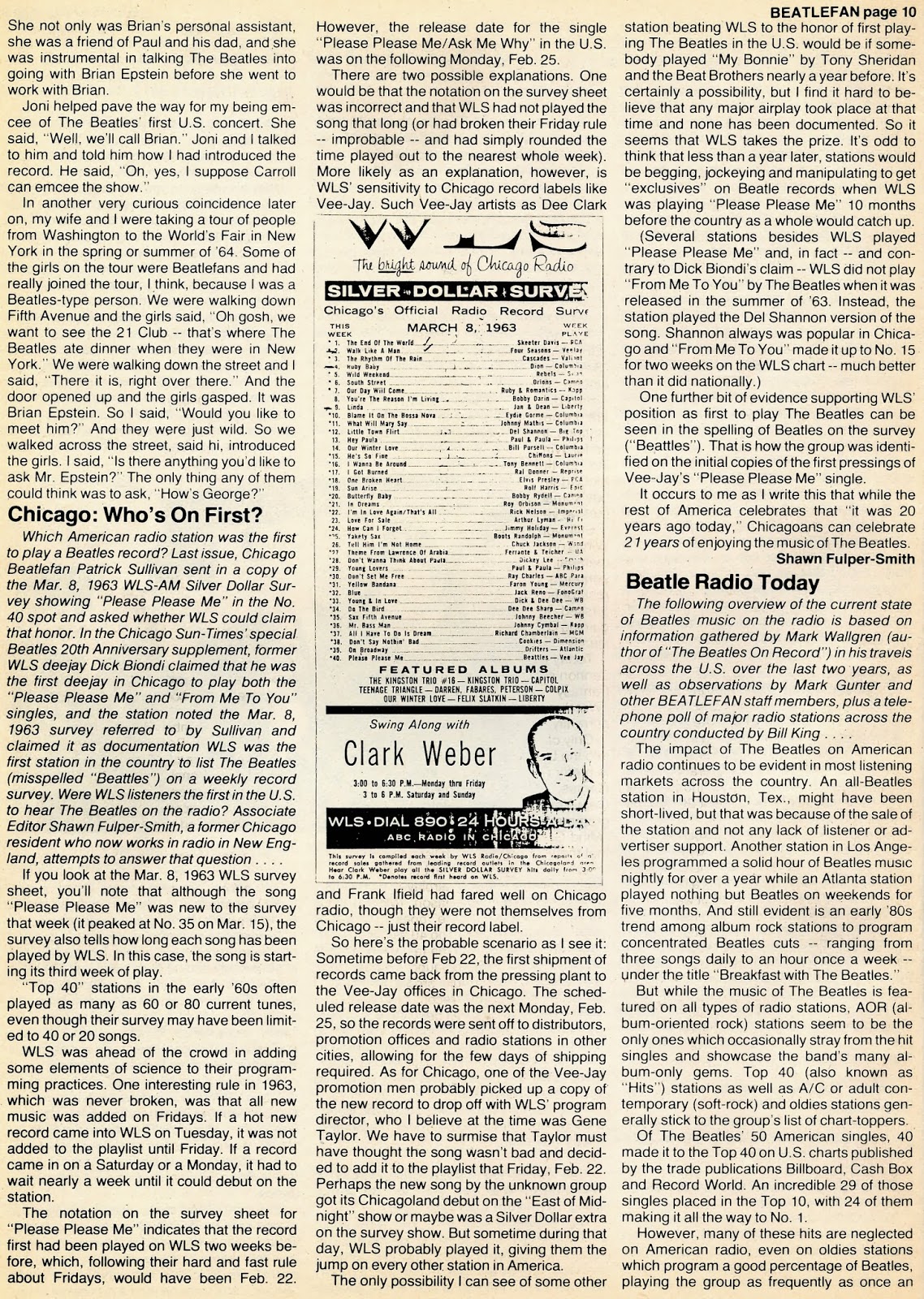 As well as our own piece on this subject:
Click here: Forgotten Hits - Who Played The Very First Beatles Record In America?