e:  THIS AND THAT:
It used to be that a song reaching 25 years of age would be considered an "oldie" ... actually, this still may be the case with so many radio stations now focusing on the music of the '80's, the '90's and beyond ... so it was interesting to see Yahoo take a look back at the Biggest #1 Hits from 1988 ... 25 Years Ago.  (Also interesting to note that in order to be considered for a Rock And Roll Hall Of Fame nomination, the selected artist had to record their first music at least 25 years ago.)  Makes for some interesting pickin''s ... (although I don't ever see Tiffany, Debbie Gibson or Rick Astley ever coming up for serious consideration!)  kk

Click here: Twenty-Five Years Gone — 33 #1 Hit Singles of 1988! | List Of The Day - Yahoo Music
And, speaking of 25 Year Anniversaries, we got this note from Joe Klein last week ...
Kent,
Hard to believe it was 25 YEARS AGO this week that the very cool "Rockumentary" U2 RATTLE AND HUM opened in theaters in the U.S. My production company, L.A. TRAX, was producing radio commercials for several major record labels and few movie studios back then. Paramount Pictures hired us to produce a series of radio commercials for the movie, which was a pretty "well-paying gig" to be sure (although I recall feeling that it was "almost enough" at the time).
Here's a couple of the spots for the movie which were airing on radio stations all over the country 25 years ago which were CLIO Award finalists.in 1989 ... http://soundcloud.com/prowlerdog/u2-rattle-and-hum-radio-spots
-- Joe Klein


Meanwhile, Wanda Jackson's name has come up a number of times over the years in Forgotten Hits ... so I'm sure these readers will be happy to hear this bit of news:
RollingStone.com To Premiere A New Wanda Jackson Recording From The Forthcoming Jack White Tribute Album
Los Angeles, CA - The Queen of Rockabilly, music legend Wanda Jackson, has recorded a brand new cover version of The White Stripes’ “In The Cold, Cold Night,” which will be premiered as a full audio stream on RollingStone.com November 12th. The slow burner penned by Jack White for The Stripes’ breakout album Elephant is the first single from the brand new tribute album Rockin’ Legends Pay Tribute To Jack White to be released on both CD and vinyl as well as digital November 19th by Cleopatra Records. The album is a one of a kind tribute that features several of White’s musical predecessors, giants of rockabilly, early rock and classic punk on whose shoulders White has stood, including Big Jay McNeely, Sonny Burgess, Gary U.S. Bonds, Bobby Vee, Walter Lure of Johnny Thunders’ The Heartbreakers, Knox of UK punk legends The Vibrators and many more!
Listen to the stream here:
http://www.rollingstone.com/music/news/wanda-jackson-covers-the-white-stripes-song-premiere-20131108
Not all of these names may be familiar to fans of Jack White, but most will know of his deep admiration for the pioneering performer Wanda Jackson who broke new ground in the 1950s as the first popular female rockabilly artist. In 2009, White produced Wanda’s critically acclaimed solo album The Party Ain’t Over, which landed Jackson on the Billboard Top 200 album charts for the very first time in her long career. On Rockin’ Legends, Wanda shows the admiration is mutual with her slightly countrified, ultra sultry take on “In The Cold, Cold Night,” which also features instrumentation and production by Shooter Jennings, son of famed country outlaw Waylon Jennings.
And hers is not the only inventive spin on White’s modern alternative classics. Big Jay McNeely brings a swingin’ vocal to “I’m Shakin’” as he trades sax solos with Hawkwind wild man Nik Turner. Speaking of wild men, the lucha libre masked guitar slingin’ trio Los Straightjackets throw down a raucous instrumental version of “Icky Thump” while the aforementioned punk rockers, Knox and Walter Lure, team up with drum hero W.S. “Fluke” Holland, the skinsman for both Carl Perkins and Johnny Cash, on “Seven Nation Army.” Exploring the outer reaches of Jack White’s diverse career, Sonny Burgess brings in his Legendary Pacers on a cover of The Raconteur’s “Steady As She Goes” and Tex-Mex singer Rosie Flores crashes the boys club with a stellar cover of the titular track from White’s recent solo album Blunderbuss.
From rockabilly to punk, neo surf to traditional country, no other tribute album has spanned so much musical diversity and history, a testament to the vast range of influences that inspired Jack White’s incredible career.
1. In The Cold, Cold Night - Wanda Jackson feat. Shooter Jennings
2. I’m Shakin’ - Big Jay McNeely & Nik Turner
3. Salute Your Solution - Gary U.S. Bonds
4. Steady As She Goes - Sonny Burgess & The Legendary Pacers
5. Trash Tongue Talker - Joe Clay & Cranston Clements
6. Another Way To Die - Robert Gordon & Chris Spedding
7. Seven Nation Army - Knox, Walter Lure & W.S. “Fluke” Holland
8. Fly Farm Blues - Johnny Powers
9. We’re Going To Be Friends - Bobby Vee
10. Blunderbuss - Rosie Flores
11. Fell In Love With A Girl - The Dirt Daubers
12. You Don’t Know What Love Is (You Just Do As You’re Told) - Rejected Youth Nation feat. Cyril Neville
13. Top Yourself - The Denver Broncos UK
14. Icky Thump - Los Straightjackets
Purchase the CD at Amazon: http://georiot.co/2cyL
Download the album at iTunes: http://georiot.co/3OUH
Kent,
I don't know if you saw last week's "Pawn Stars" on the History Channel, but it featured my and Forgotten Hits' friend, the legendary session guitarist Vic Flick.
He successfully sold his 1961 Olympic White Fender Stratocaster for $55,000.00!!!  (see attached photo).  Both guitars are featured on his book's jacket.
A while ago, I helped broker the electric Vox 12-String he used on Peter & Gordon's "World Without Love".  (see picture of me playing it, attached).
Of interest, Vic still has for sale his 1939 Clifford Essex (with D'Armond pick-up).  This is the guitar he used to play and record the iconic "James Bond Theme" in 1962.  (see photo of guitar on display at the Rock & Roll Hall of Fame Museum).
Also attached is a partial discography of only some of the hits on which Vic played guitar.  This is part of the paperwork that he presented to Rick at the pawn shop featured on the television program.
Perhaps you have readers who have an active interest in owning this bit of rock and roll history.
Thanks, my friend, and keep up the great work!  (and finally, see attached of me and a friend of mine).Best Regards,
Bob Rush  ("The Beat Magazine")
drrzr@comcast.net 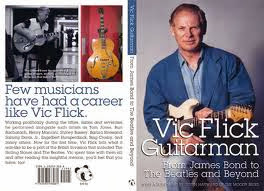 Some great photos here ... thanks, Bob!  As for Vic's discography, it's too long to run here (45 pages!!!  And counting!!!)  But I'll be happy to email it to anybody who asks for a copy.  (It's a PDF format which we can't run on the site anyway ... suffice to say that Vic Flick has had a VERY extensive career making music in the British studios!!!)

And, speaking of all things British ...

Great Britain's ITV recently ran a poll of The Top 20 Favorite Elvis Songs ... not a bad list (with a few surprises.)  I don't think I could narrow mine down to just twenty ... and I tend to enjoy the ones that weren't the biggest hits ... things like "Such A Night" (probably my all-time favorite Elvis recording) and "Easy Question" or "It Hurts Me" or "Fame And Fortune" ... "Treat Me Nice" or "A Mess Of Blues" ... SO many great tracks that never get airplay anymore.  (Heck they don't even play his BIGGEST hits on the radio anymore!  In fact, for all intents and purposes, radio has reduced Elvis down to a One Hit Wonder with "Suspicious Minds".  If you DO hear anything else, it'll probably be "Burnin' Love" or the remix of "A Little Less Conversation" from a few years ago ... which isn't even Elvis anymore!  Culture-changing hits like "Don't Be Cruel", "Hound Dog", "Jailhouse Rock", "All Shook Up" and "Heartbreak Hotel" have all but disappeared from the airwaves (although I WAS shocked to hear "Love Me Tender" included in a recent episode of Showtime's "Masters Of Sex" ... bet they paid dearly to license that track!!!)

Meanwhile, here's how The Brits voted their all-time favorites:

re:  MIS-SUNG LYRICS:
There've been books written on misheard lyrics ("'Scuse Me While I Kiss This Guy" being probably one of the most famous ... although it's now been reported ... by no less a source than Forgotten Hits I might add ... that Hendrix used to actually sing the song that way in concert from time to time before planting one on the cheek of Noel Redding live on stage!), but the topic that's come up here recently is mis-SUNG lyrics ... where the artists either screwed up the recording right out of the gate (and it was never fixed ... part of the charm of some of these early releases) or (in the case of a remake) possibly misheard or misunderstood the original lyric and then proceeded to sing it wrong on their version.

Here are a couple more examples sent in by our readers ...

HEY KENT!
ANYONE MENTION THE MISTAKE IN THE BACKGROUND VOCALS ON "PLEASE PLEASE ME" YET??  I NEVER UNDERSTOOD WHY THEY NEVER FIXED THAT! THERE ARE A FEW OTHER BEATLE VOCAL FLUBS DURING THOSE EARLY YEARS, BUT I'M NOT JUDGING ... I GUESS STUDIO TIME WAS BOTH TIGHT AND EXPENSIVE ... AS IS THE CASE WITH MANY OTHER ARTISTS I'VE SPOKEN WITH, OFTEN THEY WERE AFRAID TO LOSE THAT SPONTANEITY OF THE "MOMENT".
MICHAEL G BUSH
I think that had a lot to do with it actually (and why you'll hear coughs in the background on a Beach Boys recording for example.)  Plus you have to remember that this was back in the days of two-track and four-track recording ... not like today where you have unlimited resources available to layer your sounds.  Back then you either nailed it or you had one hell of an engineer splicing tape together to make it sound better!
I still maintain that it's these little flaws that give this music their charm and appeal.  They weren't perfect ... and as you well know, this helped inspire a good number of us to pick up a musical instrument thinking that WE could create these sounds as well!  (kk)