Every Friday, Forgotten Hits continues to look back at The British Invasion attacking our shores (and, in particular, our airwaves) with an onslaught of brand new sounds beaming over from Jolly Ol' England.
Here's what things looked like on the charts 50 Years Ago This Weekend ...
BILLBOARD MAGAZINE:  3/21/64 - I WANT TO HOLD YOUR HAND FINALLY falls from the #1 spot, only to be replaced by SHE LOVES YOU, which had spent the previous four weeks stuck behind it at #2.  But not to worry … The Fab Four STILL have the Top Three Hits in the land, as right behind I WANT TO HOLD YOUR HAND at #2 is PLEASE PLEASE ME, holding down the #3 spot.  Their latest U.S. release, TWIST AND SHOUT, has joined them in the Top Ten, now sitting at #7.  (FOUR TOP TEN HITS in the same week!!! Insane!)
Looking at the rest of what can only be described as "The British Chart Beat", I SAW HER STANDING THERE is at #14, GLAD ALL OVER (still climbing) is at #15, I ONLY WANT TO BE WITH YOU is down to #21, NEEDLES AND PINS is up another 21 points to #25, HIPPY HIPPY SHAKE is knocking on The Top 40 Door at #41 with MY BONNIE right behind it at #42, FROM ME TO YOU has finally earned a bullet, moving from #73 to #58, THE BEATLES are in at #79 with a CANADIAN single, ROLL OVER BEETHOVEN and FOUR Beatles-related novelty hits are now on the charts: WE LOVE YOU BEATLES by THE CAREFREES at #73, MY BOYFRIEND GOT A BEATLE HAIRCUT at #83, THE BOY WITH THE BEATLE HAIR at #85 and A LETTER TO THE BEATLES by THE FOUR PREPS at #86.
I guess you could say that this is the week they officially crossed-over to become a pop-culture phenomenon.  The Beatles were now affecting every aspect of our being.


Meanwhile, check out The Top Five here in Chicago this week ... The WLS Silver Dollar Survey ranks them this way:  "Twist And Shout" is #1, "Please Please Me" is #2, "She Loves You" is #3, "I Want To Hold Your Hand" / "I Saw Her Standing There" (now showing as a two-sided hit) is #4 and "Glad All Over" is #5.  Rounding out the Top Ten are "We Love You Beatles" by The Carefrees at #9 and "It's All In The Game" by Cliff Richard at #10.  (And take a look at the unlikely trio holding down the other three Top Ten Spots:  The Beach Boys with "Fun Fun Fun", Bobby Vinton with "My Heart Belongs To Only You" and Sammy Davis, Jr. with "The Shelter Of Your Arms".  Now THAT's chart diversity folks!  lol)
Other British Hits of note include The Swinging Blue Jeans at #18 with "Hippy Hippy Shake", The Searchers at #22 with "Needles And Pins" and The Beatles again, premiering at #36 with their latest hit, "Can't Buy Me Love".
On the National Charts, Canadian imports of two Beatles album tracks, "All My Lovin'" and "Roll Over Beethoven" sold enough copies to make the U.S. Chart … but here in Chicago we were treated to cover versions of those tracks by The Princeton Five (later simply The Princetons of "Georgianna" fame) and Jimmy Griffin, who six years later would be hitting the charts as a member of Bread.

Mike Baker salutes The British Invasion this weekend and next on his "Forgotten 45's" radio program ... more details below ...


The 50th Anniversary Of The British Invasion

Many people have heard the 50th anniversary of The Beatles on American Radio but what followed was the British Invasion. The Animals, The Dave Clark Five, Gerry and the Pacemakers, Herman's Hermits, The Kinks, The Rolling Stones, The Who and many more invaded the American Charts. 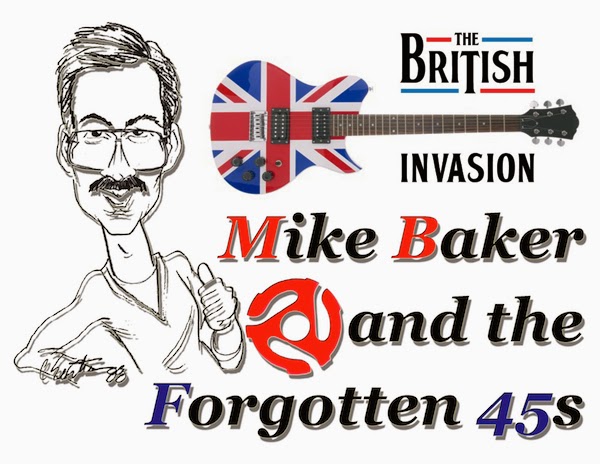 Mike Baker And The Forgotten 45s