The Saturday Surveys (May 31st)

A little something different this week ...

Three charts from the same week in 1970 ... with completely different #1 Records!  (This is what made our local charts so exciting!)

The KAAY Chart out of Little Rock, Arkansas, listed "Vehicle" by The Ides Of March at #1 this week.  (You'd expect to see that in Chicago, where it also topped the chart ... albeit a full month earlier!)  Incredibly it doesn't make the KAKC chart at all and lists at #22 on the L&H Chart!

This second chart comes from the Lyon and Healy Store ... now my recollection of Lyon and Healy was that they sold pianos and organs ... and sheet music ... and gave lessons on this equipment.  I never really thought of them as a source to buy the latest hit records ... but maybe that's because the small branch I used to visit in Hillside, IL, just wasn't set up for these things.

Then again, their chart may have been published a bit earlier ... "Let It Be" by The Beatles was still showing up at #27, some two months after it peaked nationally ... their follow-up single "The Long And Winding Road" was already climbing the charts everywhere else.  (KAAY shows it premiering at #25 this week while the KAKC Chart shown below already shows it slipping from #7 to #8 in its fourth week on the chart.)  The Lyon and Healey Chart posts it at #9, designating it as the Hit Of The Week. 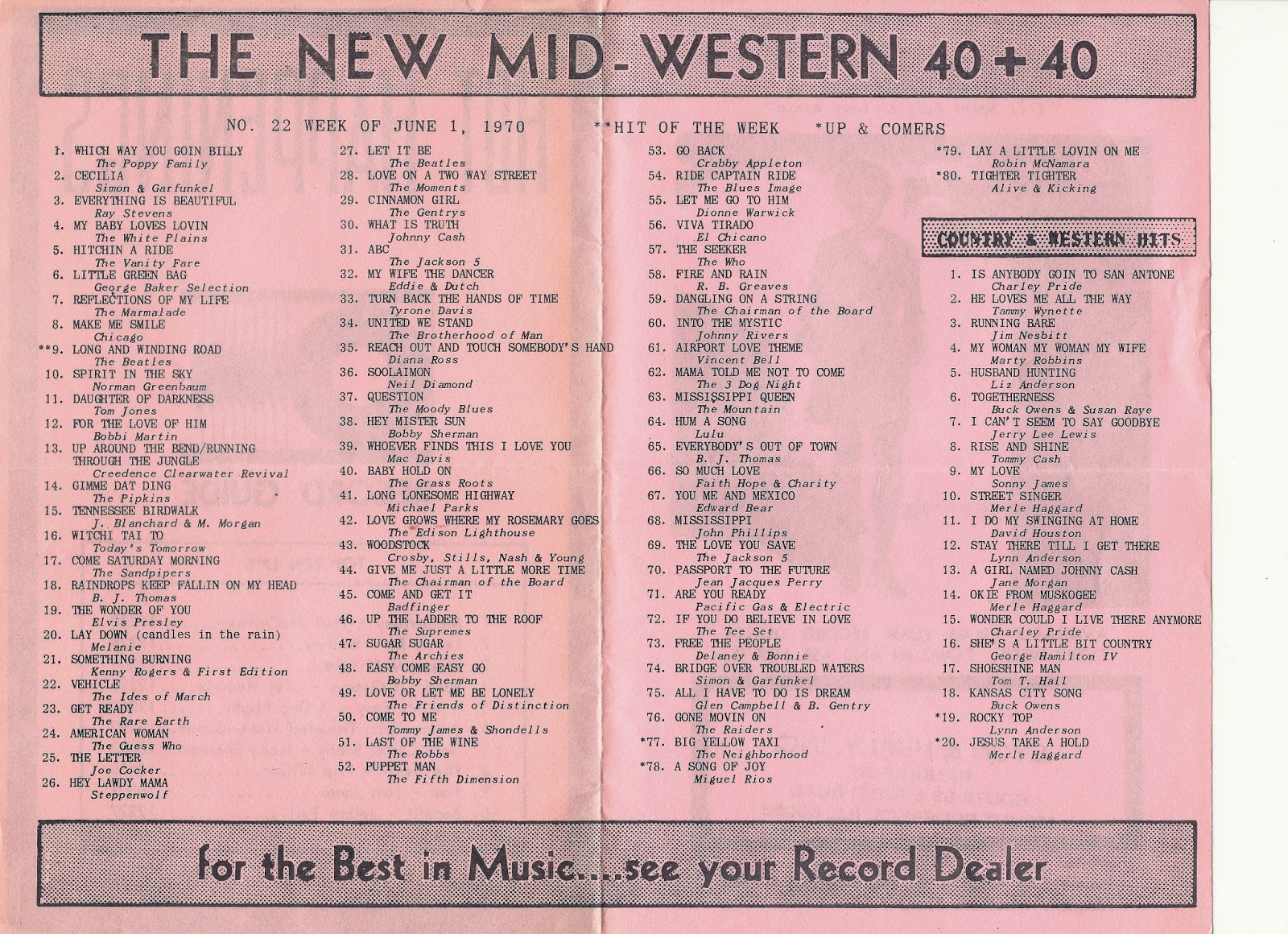 Three Dog Night took a HUGE leap this week from #13 to #2 ... and the latest hits by Steppenwolf, Melanie, Paul Davis, Leon Russell and The Sandpipers also saw a significant upward movement.

Elvis' latest, "The Wonder Of You" was all over the place based on these charts ... premiering at #30 in Tulsa, OK, up five points to #16 in Little Rock, AR and #19 on the "Midwestern Chart" published by Lyon and Healy.

It's charts like these that show you why we all remember how big any given record was based on where we grew up hearing it.  KAKC shows Paul Davis' version of "A Little Bit Of Soap" as a big hit ... yet it only peaked at #52 in Billboard ... and it doesn't even show up on the other two charts posted today.

Note some of the "local hits", too ... "Friends" by Feather, "My Wife, The Dancer" by Eddie and Dutch and "Genesis - Last Chapter" by Terry McGovern are all titles that leave most of us scratching our heads.  (Meanwhile, look how well The Gentrys' version of the Neil Young classic "Cinnamon Girl" was doing ... #14 (down from #3) in Oklahoma and #29 on the Lyon and Healy Chart ... yet another #52 peaker in Billboard.

Below is a recap of some of the most popular music of the day ... as well as a few more surprise appearances:

So how do you determine the REAL, legitimate hits with this kind of discrepancy amongst the charts?

Well, I figure if two out of three of these charts listed a song in The Top 20, it was pretty much a national hit.  But doing a quick recap, that only allows for 14 titles ... leaving six spots open for your own local favorites ...

And that's what made radio so fun and exciting back in the day ... as we can see by just scanning these random charts, that meant that the other six could be almost ANYTHING!!!

"Mississippi Queen" by Mountain or "Ticket To Ride" by The Carpenters.

"Hey Lawdy Mama" by Steppenwolf" or "Puppet Man" by The Fifth Dimension.


Whichever way the station decided to go was totally fine by us ... we loved it ALL!
Posted by Kent Kotal at 7:00 AM