50 YEARS AGO THIS WEEKEND:

DO WAH DIDDY DIDDY finally hits #1 for MANFRED MANN on the Billboard Hot 100 Chart dated October 17th … it'll stay there for another week.   A SUMMER SONG by CHAD AND JEREMY is up to #7 … and that's it once again for British Top Ten Hits.  (The Brits are held at bay by some pretty stiff American competition this week … OH, PRETTY WOMAN by ROY ORBISON, LAST KISS by J. FRANK WILSON AND THE CAVALIERS, IT HURTS TO BE IN LOVE by GENE PITNEY and WHEN I GROW UP TO BE A MAN by THE BEACH BOYS are also solid Top Ten Hits this week.

MATCHBOX by THE BEATLES inches up a spot to #17 while HAVE I THE RIGHT by THE HONECOMBS finally makes The US Top 20 at #20.  TOBACCO ROAD by THE NASHVILLE TEENS is at #25, FROM A WINDOW by BILLY J. KRAMER AND THE DAKOTAS is at #27 and I'M CRYING by THE ANIMALS climbs to #29.

GERRY AND THE PACEMAKERS have the #31 Hit this week with I LIKE IT, THE ANIMALS fall to #38 with THE HOUSE OF THE RISING SUN, THE BEATLES drop from #25 to #39 with SLOW DOWN and THE DAVE CLARK FIVE climb a dozen places to #40 with EVERYBODY KNOWS.

DUSTY SPRINGFIELD seems to have run out of gas at #44 with her latest, ALL CRIED OUT but PETER AND GORDON continue to climb the chart as I DON'T WANT TO SEE YOU AGAIN climbs from #61 to #48.  Likewise for THE KINKS, who jump ten places from #66 to #56 with their first US Chart Hit YOU REALLY GOT ME.

Completing the British presence on this week's Billboard Chart are I WOULDN'T TRADE YOU FOR THE WORLD by THE BACHELORS at #69, I'M INTO SOMETHING GOOD by HERMAN'S HERMITS, premiering at #79, TIME IS ON MY SIDE by THE ROLLING STONES, premiering right behind it at #80, SHE'S NOT THERE, new for THE ZOMBIES, at #87, and WHEN YOU WALK IN THE ROOM by THE SEARCHERS, which debuts at #97.

British Invasion Artists still hold four of the Top Ten spots on this week's WLS Silver Dollar Survey … HAVE I THE RIGHT by THE HONEYCOMBS climbs to #2, DO WAH DIDDY DIDDY by MANFRED MANN sits right behind it at #3, TOBACCO ROAD by THE NASHVILLE TEENS is at #5 and FROM A WINDOW by BILLY J. KRAMER AND THE DAKOTAS now sits at #8.

MATCHBOX is now showing as an "A-Side" only at #13 for THE BEATLES, THE DAVE CLARK FIVE climb to #16 with EVERYBODY KNOWS (up from #28 the week before) and THE ANIMALS are at #17 with I'M CRYING.

Here's the Super Surf Survey from WSRF in Broward County, Florida.  (Today this radio station is still operating as "the only Haitian owned"  radio station in the U.S.!!!)

Back in 1970, however, they were playing The Top 40 Hits ... and R. Dean Taylor was at the very top of their chart with "Indiana Wants Me", a song that also topped the chart here in Chicago.

Check out the #5 Hit by Blues Image ... "Gas Lamps And Clay" was the follow-up to their big hit "Ride Captain Ride" ... but nationally it never climbed any higher than #81 in Billboard ... yet here it sits at #5 in Florida! 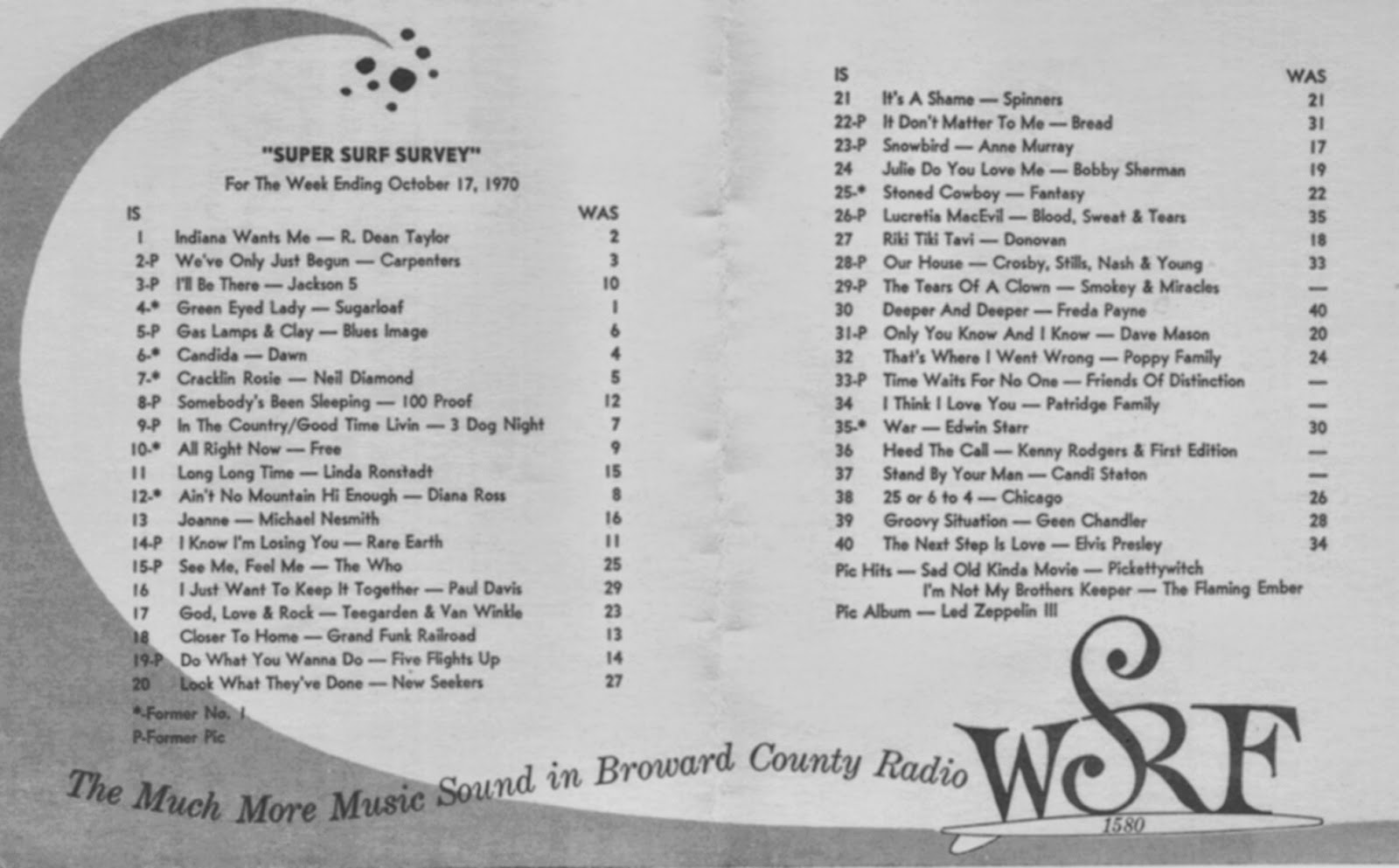 Flipping the clock back a few years, we find The Association on top of KUDL's Boss 30 Survey out of Kansas City with their monster hit "Never My Love", which knocks "The Letter" by The Box Tops out of the #1 spot this week in 1967.

Local favorites The Classmen are holding their own at #4 with Julie".  I mentioned the Nancy Sinatra hit "Lightning's Girl" a couple of weeks ago ... but this time we're going to play it!  We also have a little bit of fun with Harpers Bizarre's homage to the great Cole Porter ... and a long, lost forgotten gem by Petula Clark, written by the "Happy Together" team of Alan Gordon and Garry Bonner.  (I always thought this song would song GREAT recorded by Olivia Newton-John ... her breathy, '70's vocals could have pushed this one over the top!) 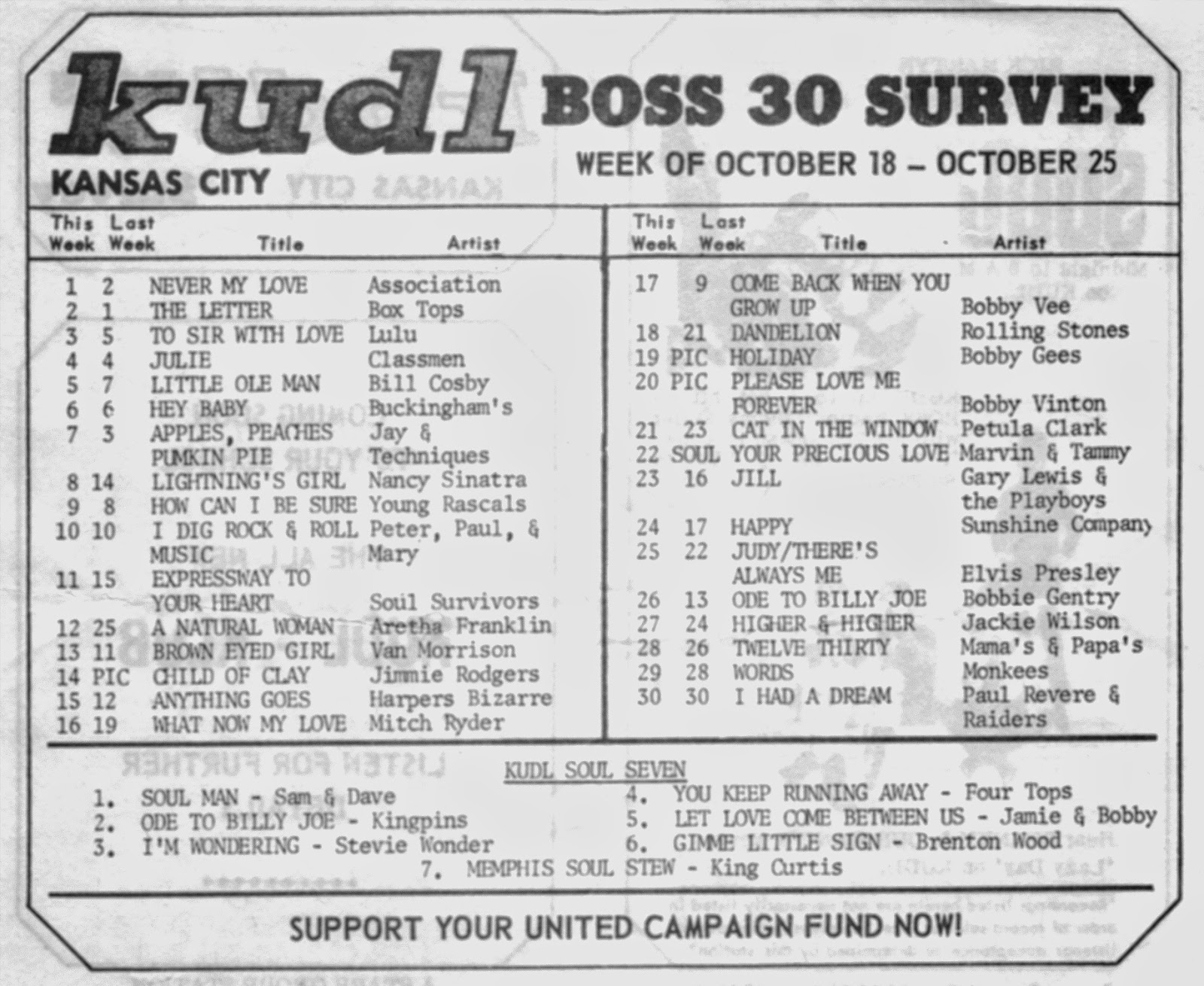 Clark Besch suggested we feature BOTH sides of this KOOK survey from 1968.  This chart lists not only the top 40 Hits in Montana for this week in '68 ... but it even has this week's television listings posted on it as well!

This was a pretty heavy time in music ... and it's certainly reflected on this chart.  (Guess the Mounties were doing a whole lot more than moose-hunting back in '68!)

The #1 Record this week is "Sookie Sookie" by Steppenwolf, one of the top vote-getters in our Favorite, Forgotten B-Sides Poll a few years back.  (It's a GREAT track that got a TON of airplay back in the day ... and STILL deserves a spin now and again on the Classic Rock Stations.)

Strangest thing about it being #1 is the fact that it was the B-SIDE of the record!!!  "Magic Carpent Ride" was the hit A-Side virtually everywhere else!  (It sits at #13 on this KOOK chart.)

But heavy makes you happy in Montana ... Jimi Hendrix, Deep Purple, Vanilla Fudge, Big Brother and the Holding Company, Cream and The Doors also have records in The Top 12 this week.  (Several of these artists are also represented on KOOK's Album Chart this week!)

Surrounded by tracks by The Who, The Crazy World Of Arthur Brown, Country Joe and the Fish and Iron Butterfly, it DOES seem a little bit odd to also find bubblegum tracks like "Chewy Chewy" by The Ohio Express and "Quick Joey Small" by The Kasentz-Katz Singing Orchestral Circus!  (Not to mention "Battle Hymn of the Republic" by soft-rock crooner Andy Williams!!!)

I'm guessing that KOOK had been around for a while by this point ... this king-sized survey also lists the Top Five Records from both five and ten years ago!) 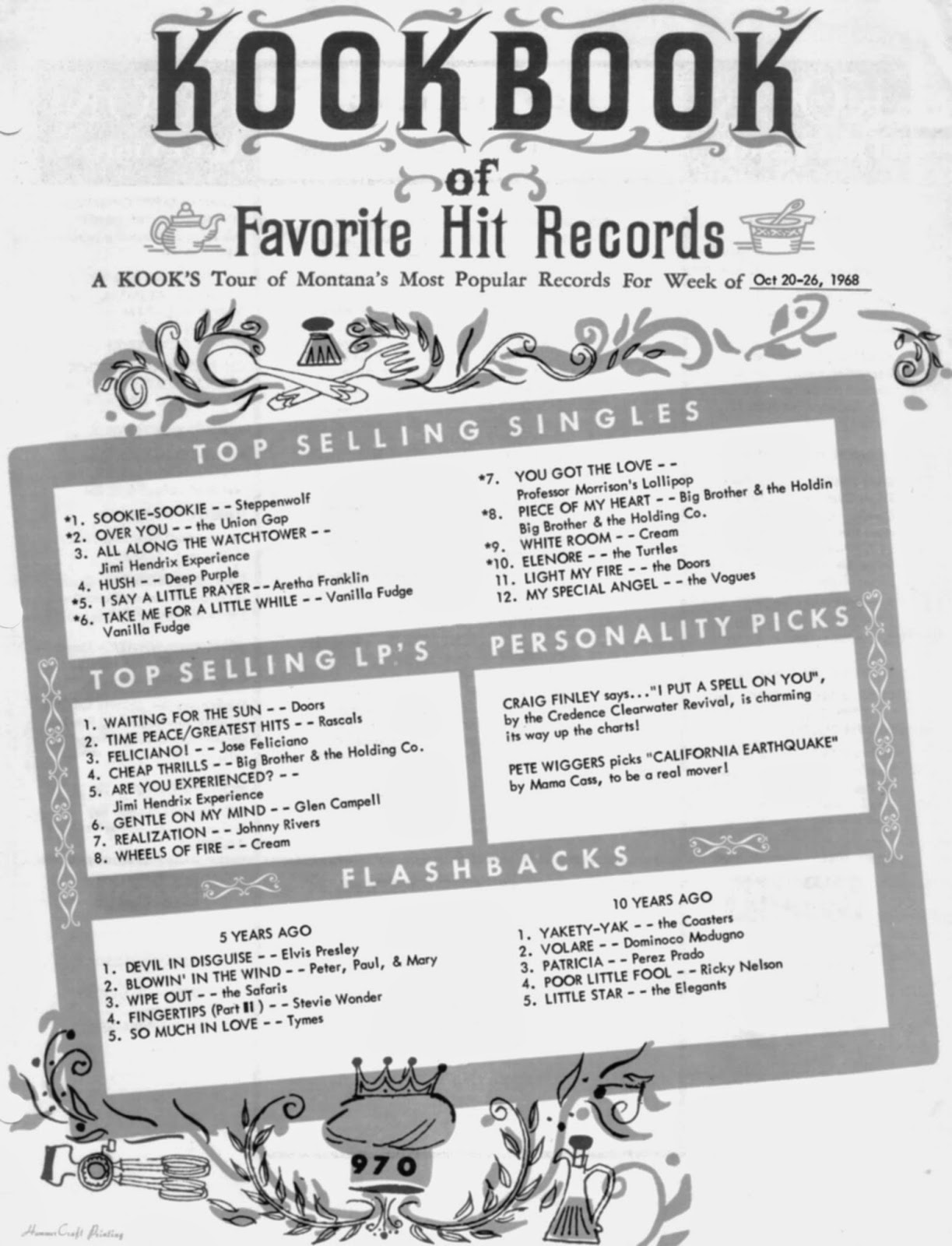 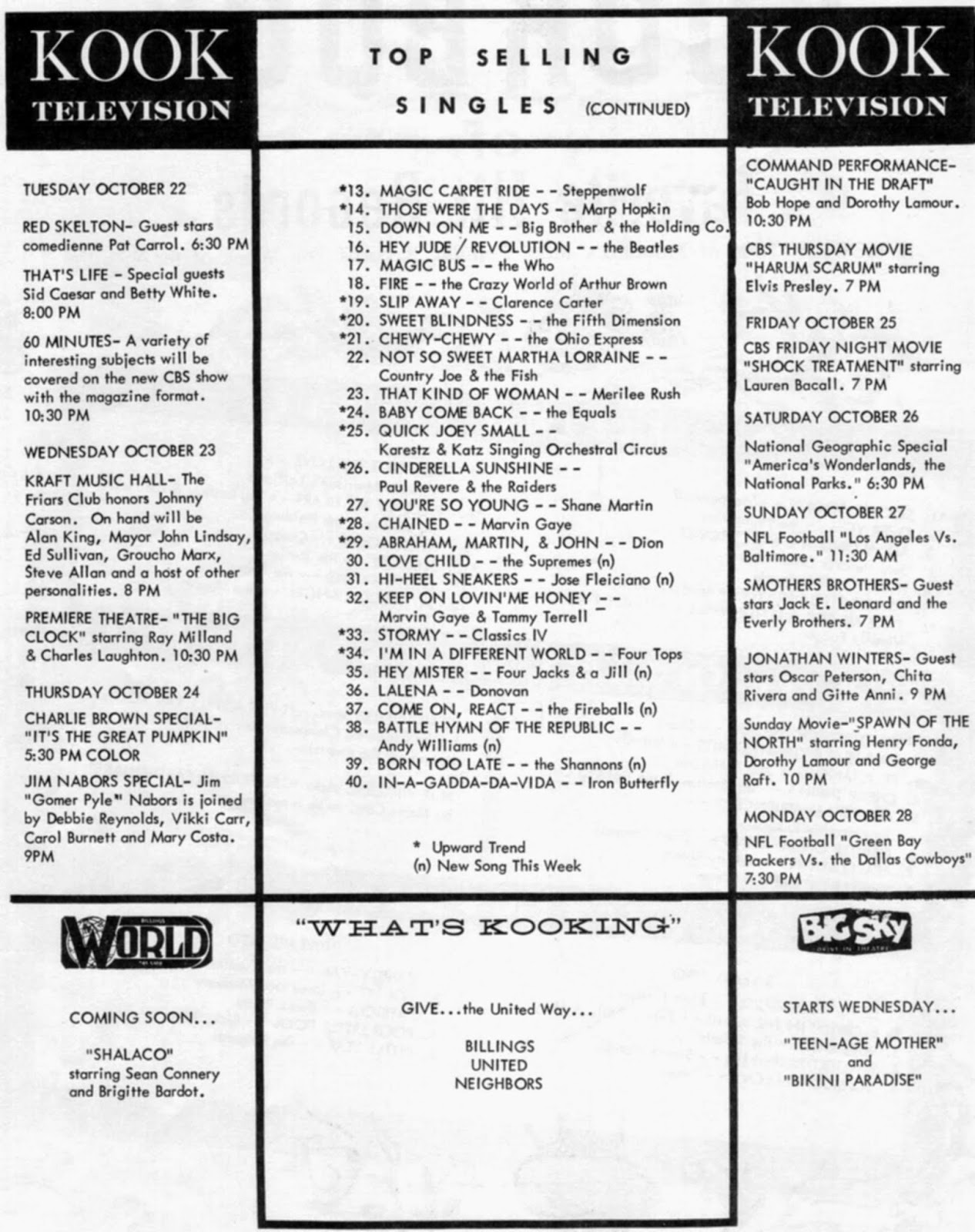 You don't see too many charts from Hawaii ... but we've got 'em here in our Saturday Surveys feature!

Here's one from 1964 ... where you'd barely know The British Invasion was going on!  (That's not really fair ... while the Top Five Hits don't include a single British artist, they are VERY well represented as you make your way down the chart.)

The Beatles are at #7 with "I'll Be Back", a song that wouldn't be released here in The States for another month or so (and never at all as a single!), followed by Gerry and the Pacemakers and Herman's Hermits (both in The Top Ten).  The Beatles also have the Top Two Albums on this week's chart with the soundtrack to "A Hard Day's Night" and "Something New".

The true chart only consists of this week's Top Ten songs ... and this list is topped by The Blendells with "La La La La La", #1 for its third consecutive week!  (This one never climbed any higher than #62 in Billboard!)  Our previously mentioned buddy Andy Williams sits at #2!  (And there's not a Don Ho track to be found!)

In a rather unusual move, K-POI shows the popular new tracks for each of the 18 weeks ... and here is where The British Acts REALLY rule ...

"A Hard Day's Night", "I Should Have Known Better", "And I Love Her" and "I'll Cry Instead" are all listed for The Beatles.  You'll also find The Rolling Stones ("Tell Me" and "It's All Over Now"), Brian Poole ("Someone, Someone"), Billy J. Kramer ("From A Window"), Manfred Mann (Do Wah Diddy Diddy"), Cilla Black ("It's For You"), The Overlanders ("Don't It Make You Feel Good"), Dusty Springfield ("All Cried Out"), The Kinks ("You Really Got Me"), Peter And Gordon ("I Don't Want To See You Again"), The Swingin' Blue Jeans ("Promise You'll Tell Her"), The Dave Clark Five ("Everybody Knows") and The Zombies ("She's Not There").  Collectively that's 55% of all the songs listed!!! 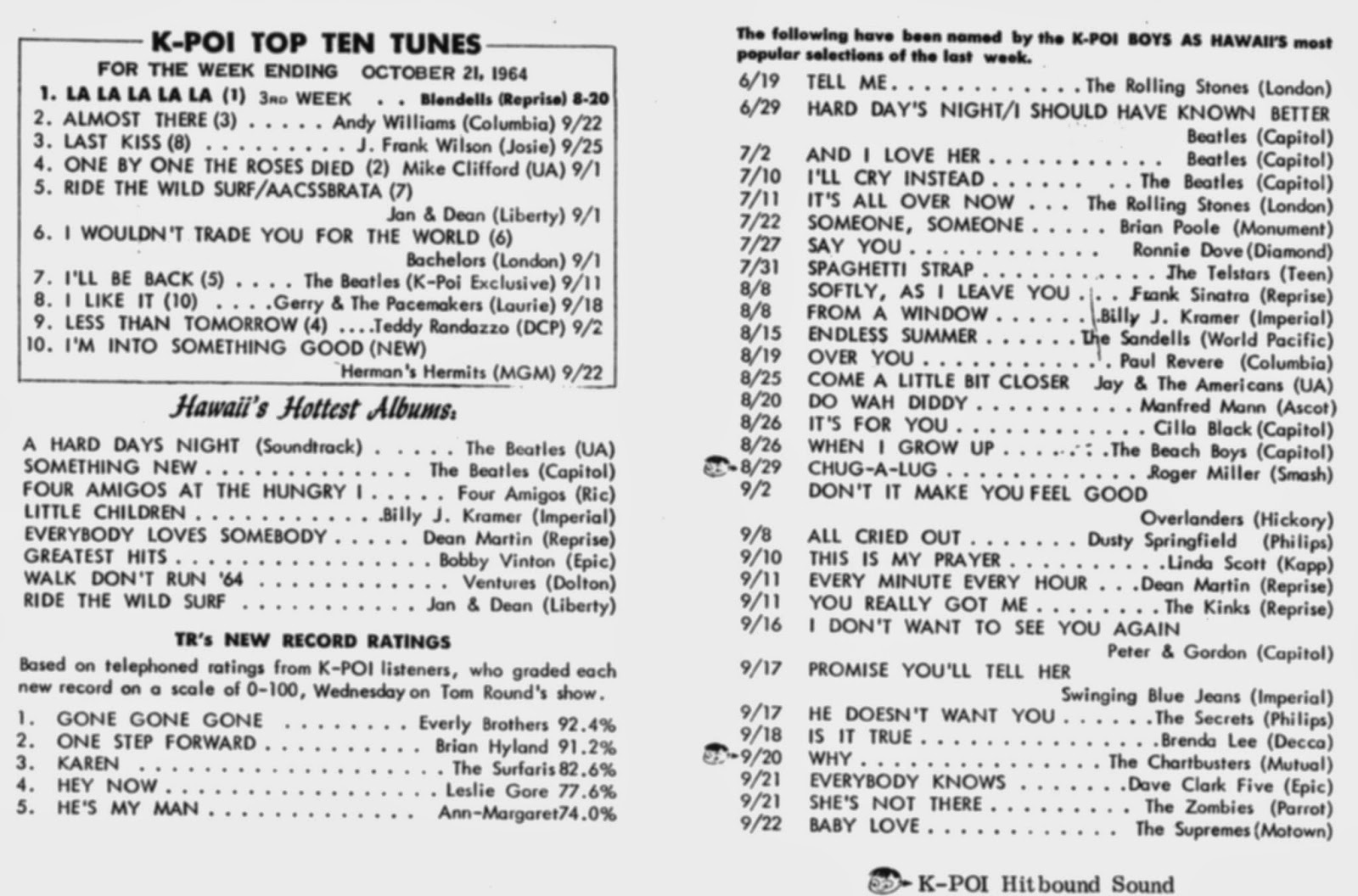 I know we've run a few 1965 charts recently ... but I've never seen one with The Yardbirds at #1 ... and with a two-sided hit no less!!!  Making a big leap from #42 to #24 are The Knickerbockers with their Beatles sound-alike tune "Lies", another personal favorite of mine from the '60's. 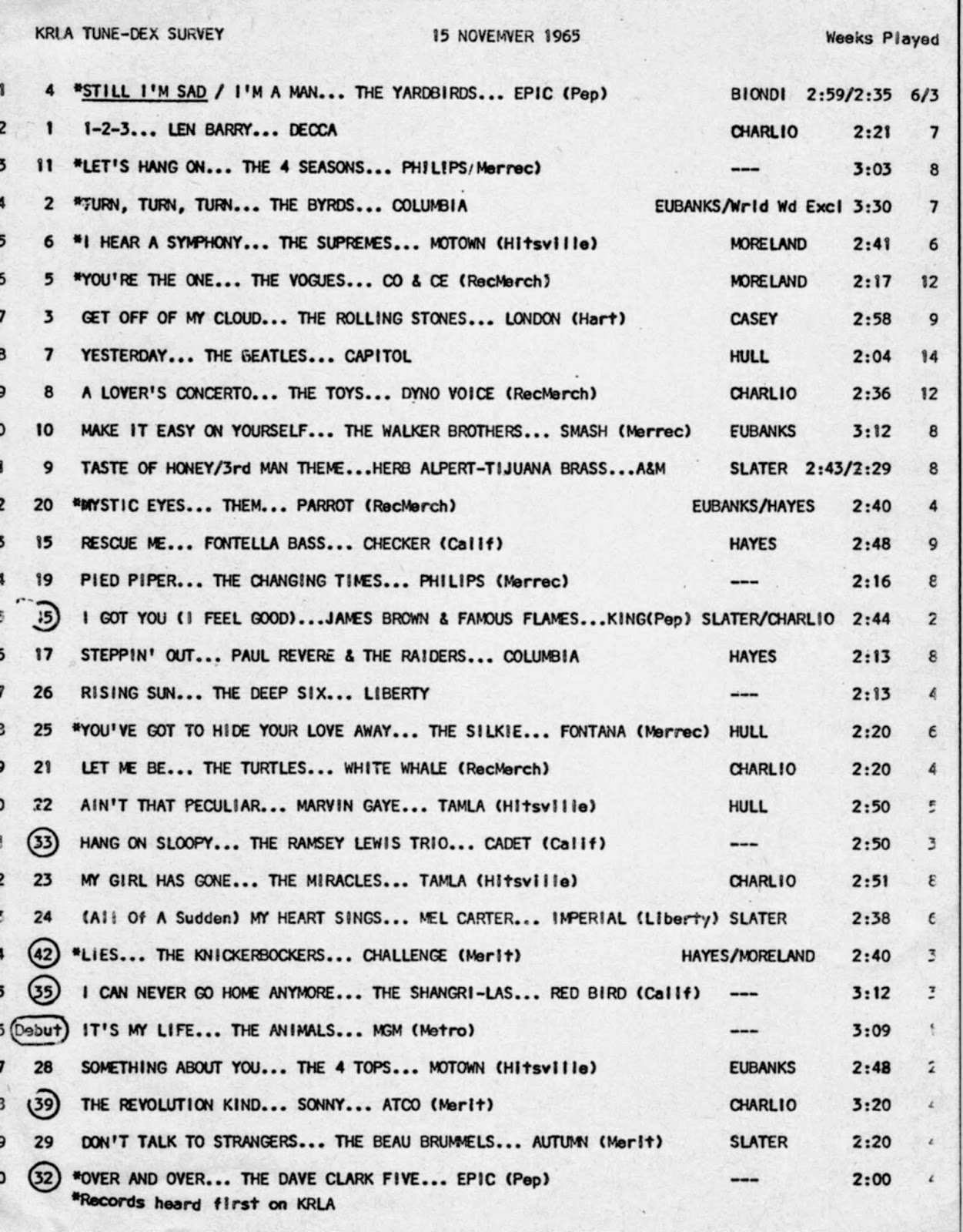