Joel Whitburn has a brand new book coming out in January that, for the first time EVER, will show the peak position of EVERY record to make the Billboard, Cash Box and Music Vendor / Record World charts side by side! 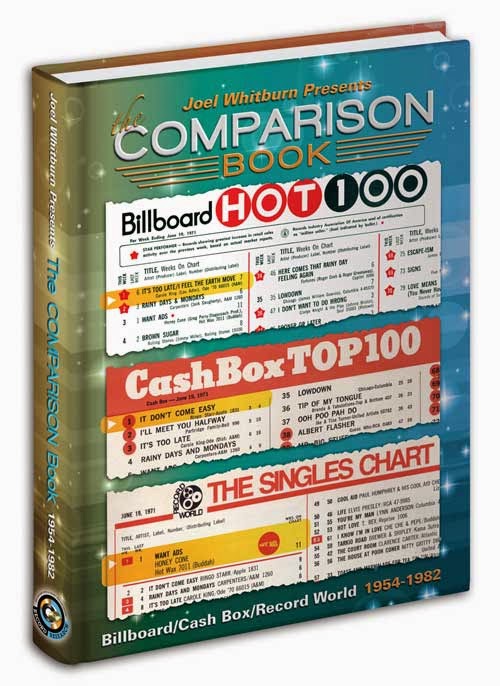 This new book (called The Comparison Charts) is a MUST HAVE for chart fanatics, record collectors and trivia buffs like me ... so we were THRILLED when Joel told us that he'd like to do another trivia contest and give a copy away to a lucky Forgotten Hits Reader.

Now I know that many of you on the list have already gone out and bought copies of Joel's latest books, each dedicated to the individual charts of Billboard Magazine (featuring The Hot 100 and the "Bubbling Under charts), Cash Box Magazine (and their "Looking Ahead" charts) and Music Vendor / Record World (who also published a "Coming Up" chart ranking positions #101 - 150).

But I ALSO know that if you've made this type of commitment (and financial investment) into this "hobby", you, too, can't wait to get your hands on this brand new, all-in-one volume!

And it is for THOSE fans that we have especially designed this Ten Question Trivia Contest.  (I'll warn you ahead of time that these are NOT easy questions ... and you may need to consult all three books to properly determine your answers ... but that's the plan, man ... to reward one of those faithful Record Research junkies with Joel's brand new "Comparison Chart" book the minute it becomes available in January.

Does this limit the playing field?  Probably ... but the answers ARE out there ... so give it your best shot and let's see how we do.

We'll announce the winner (from all correct entries received) on Monday, November 3rd ... and we'll be accepting entries right through midnight on October 31st.

Good Luck to everyone out there!!!


Good Morning Kent,
Here is my ten question contest with the winner awarded a copy of my upcoming "Comparison Book 1954-1982".
All questions and answers are taken directly from a combination of data from these Record Research books 1954-1982:
Top Pop Singles (Billboard)
Cash Box Pop Hits
Hit Records (Music Vendor and Record World)

Good luck to all!

Joel Whitburn
Posted by Kent Kotal at 6:00 AM