Brian Epstein's funeral services are held today.  In order to give his family privacy, The Beatles do not attend. 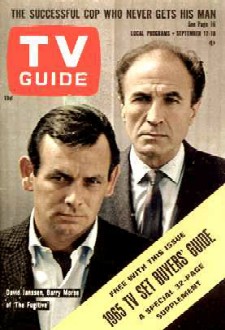 The final episode of "The Fugitive" airs tonight to a record-breaking audience of 78 million viewers.  After chasing him for four years, Lieutenant Gerard shoots The One-Armed Man off the top of a water tower just moments after he confesses to killing Dr. Richard Kimble's wife … "Yeah, I killed her … and now I'm gonna kill you, too."


Series creator Roy Huggins promised early on that the series would stay true to its premise … Dr. Richard Kimble was innocent and there would be no surprising twists or turns along the way.  The series WOULD have a resolution.

To an extent I found this not always to be the case.  As well-written and suspenseful as every episode was … and this was especially the case if that episode featured Lieutenant Gerard or the One-Armed Man … or both … you still knew that Kimble was going to get away and avoid capture by his relentless pursuer. 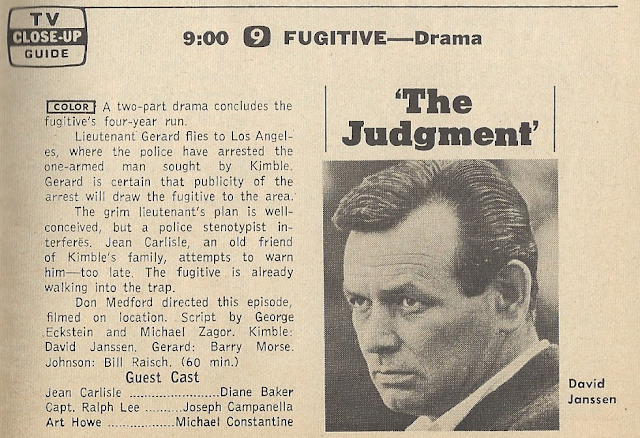 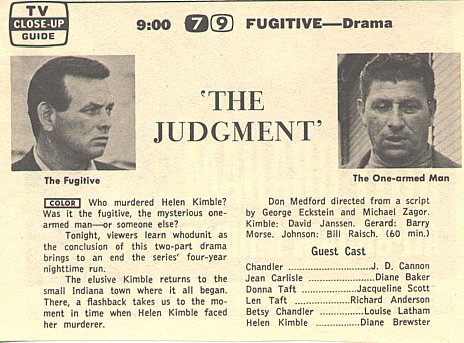 About midway through the series a well-placed rumor came out that said that the series was going to end with Gerard being the murderer of Kimble's wife … which is why he was so intent on capturing him and putting him away.  More than one source at the time stated that this was, indeed, a considered storyline that now had to be scrapped because too many people were talking about it.  I don't know that I believe that to be true … Kimble was a decent and educated man and Gerard believed in his heart that he was doing the right thing by making sure that justice was served.  "The law says he's guilty … and I enforce the law."  (Plus Kimble escaped on Gerard's watch … and that made things personal.)

Still when we find out in the finale that someone else was in the house the night that Helen Kimble was killed and witnessed the murder AND The One-Armed Man, I couldn't help but feel somewhat cheated.  It did seem to distort the storyline beyond reasonable consideration and wasn’t quite the exciting, satisfying conclusion I was hoping for.

I turned ten years old the year "The Fugitive" premiered in 1963.  I was hooked before it ever hit the air, simply by the commercials that ran leading up to the fall season.  I begged and begged my parents to let me watch the show, which came on at 9:00 on Tuesday Nights, my normal bedtime.  They finally agreed that on Tuesdays only I could stay up until 10:00 to watch my favorite show.

I've seen many of these episodes at least thirty times since … and the really good ones still bring a tear to my eye or increase my heart rate a little bit every time Gerard gets near … even though I know EXACTLY what's going to happen and how Kimble is going to get away.  I also own the complete series on VHS and DVD and will still pop in an episode from time to time.  That says a lot for a series some 50-years-on.

Along the way, Kimble encounters both Lieutenant Gerard's wife and son, saving each of them in some fashion and showing absolutely no sign of being capable of such a horrendous crime, causing each of them to question the relentless pursuit by their respective husband and father.

Over the course of its four year run "The Fugitive" was nominated for five Emmys and won for "Outstanding Dramatic Series" in 1966.  Its record of 78 million viewers as the most-watched television show of all-time for its 1967 finale will stand until the "Who Shot JR" episode of "Dallas" in 1981.  In 1993 a very successful film version was made starring Harrison Ford as Dr. Richard Kimble.  In 2000 a very UN-successful television series reboot was launched starring Tim Daly as The Fugitive.  Honestly, it was virtually unwatchable.  (Then again, remember "The New Monkees"?????)  Some things just DON'T need to be messed with!!!  They just can't be improved from the original. 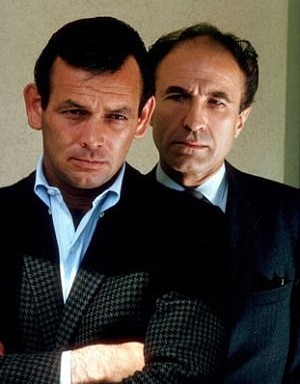