LIFE IN THE KEY OF RUBINI 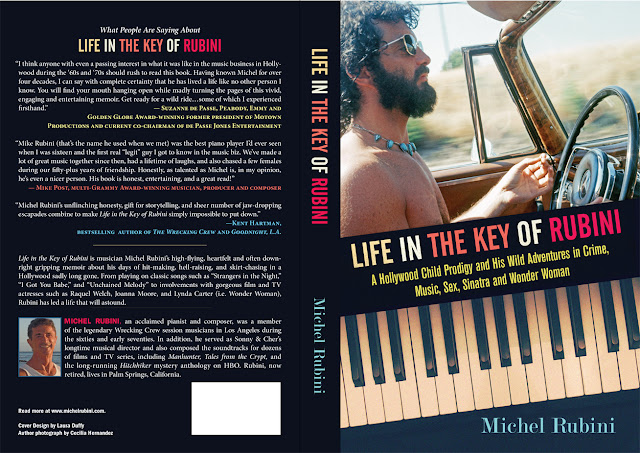 "Life In The Key Of Rubini" tells the story (in his own words) of Michel (Mike) Rubini, a key member of The Wrecking Crew … as well as musical director for acts as varied as Sonny and Cher, Nancy Wilson and Johnny Mathis.

It's a fascinating tale that never gets boring (hell, the guy gets laid about every third page!!!) of Michel's adventures from child prodigy to highly-regarded session man to musical arranger to composer and conductor of soundtrack music.

The son of highly esteemed concert violinist Jan Rubini, Michel developed perfect pitch by his toddler years by just listening to his father tune up, warm up and practice around the house.  Soon, as a teenager, he was traveling around the world with his father, performing as his on stage accompanist on piano.

Fortunately for our Forgotten Hits Readers, Michel chose rock and roll music over the classical music he so highly trained to perform.  That decision has given all of us YEARS of musical enjoyment, thanks to the records he made with some of the biggest names in show business … even if HIS name isn't immediately familiar to you.

His mother was an actress that went by the name of Terry Walker, who he described thusly:

"To give you a little glimpse into my mother's background … she was under contract at different times to RKO, Monogram Pictures and Columbia Pictures.  She was a "starlet" in every sense of the word and was on her way up the B-Movie ladder to fame and fortune.  But, as with so many girls before and after her, she met my father.  And though she tried her best not to fall for his amorous overtures, he seduced her nonetheless, and they married in 1940.  I was born a couple of years later in 1942, which she used as a convenient excuse to retire from her acting career, and my brother (and only full sibling) David, followed me in 1945 … and that gives you a little glimpse into my mother's background.

"Oh … and she was also an alcoholic."

Jan Rubini was quite the womanizer, traveling the world and collecting a string of "girls in every port."  Son Michel, a handsome and very talented musician, had no problem following in his father's footsteps in this regard.  Over the years he has been romantically linked with some of the most beautiful women in the world.

Because of his uncanny ability to instantly sight-read any new piece of music set in front of him … as well as improvise perfect parts that captured "the feel" of whatever he happened to be recording at the time when told to just "do your thing," Michel became a very in-demand musician.  Along the way he worked with everyone from the aforementioned Sonny and Cher (even appearing as their musical director on their CBS Television Series ... DIDJAKNOW that two of the original founding members of Toto got their start as teenagers playing in Sonny and Cher's back-up band??? You'll find ALL kinds of fascinating facts like this in Michel's book!), Nancy Wilson and Johnny Mathis to sessions with Frank Sinatra, Elvis Presley, Jim Nabors, Leon Russell, Barbra Streisand, Harry Nilsson and more.

(A partial list of some of Michel's recording credits follows this review.)

Ironically, one of his first assignments was arranging something for Raquel Welch, a then struggling, unknown singer / actress, only to find himself working with her again a decade and a half later when she was not only a star but considered to be one of the sexiest, most beautiful women in the world.  Along the way, he would also date Lynda Carter, TV's Wonder Woman, on and off for several years.

The book moves along at a fun and interesting pace as Michel recounts some of his favorite adventures.  Now retired, he was encouraged to write his memoirs by none other than Kent Hartman, who wrote the book on The Wrecking Crew, who became fascinated by all the incredible stories Michel was able to tell him while being interviewed for his own book.

I, for one, am glad he followed through … as this is a fun trip down memory lane, taking a look at the "lifestyles of the rich and famous" in the anything goes '60's and '70's.

You can order YOUR copy of the book right here:
https://store.bookbaby.com/book/Life-in-the-Key-of-Rubini

Here is just a Partial List of Artists that Michel Rubini has recorded with, played keyboards for or arranged material …

In addition, here are just some of the hits where you've heard Michel "tickling the ivories"...

I Want You Back - Jackson 5
Strangers In The Night - Frank Sinatra
Unchained Melody - Righteous Brothers
The Beat Goes On - Sonny & Cher
That’s Life - Frank Sinatra
Swearin’ To God - Frankie Valli
Elenore - The Turtles
Classical Gas - Mason Williams
(Theme From) The Monkees - The Monkees
Hold Me, Thrill Me, Kiss Me - Mel Carter
A Cowboy’s Work Is Never Done - Sonny & Cher
Lipstick Traces On A Cigarette - The O’jays
A Fool In Love - Ike & Tina Turner

I Got You Babe - Sonny & Cher
When I’m Gone - Brenda Holloway
Pride And Joy - Marvin Gaye
Arizona - Mark Lindsay
Half Breed - Cher
Gypsys, Tramps & Thieves - Cher
Bang Bang (My Baby Shot Me Down) - Cher
All I Ever Need Is You - Sonny  & Cher
The Way Of Love - Cher
You Better Sit Down Kids - Cher
Me And My Arrow - Nilsson
Baby Don’t Go - Sonny & Cher
All I Really Want To Do - Cher
Dark Lady - Cher
River Deep, Mountain High - Ike and Tina Turner
Mama Was A Rock And Roll Singer, Papa Used To Write All Her Songs - Sonny & Cher
(You’re My) Soul And Inspiration - The Righteous Brothers
Ebb Tide  - The Righteous Brothers
Baby Love - The Supremes
and many, many more

(For a list of just some of the places where Michel has tickled the ovaries, you'll just have to buy the book!!!) 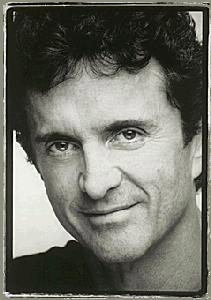