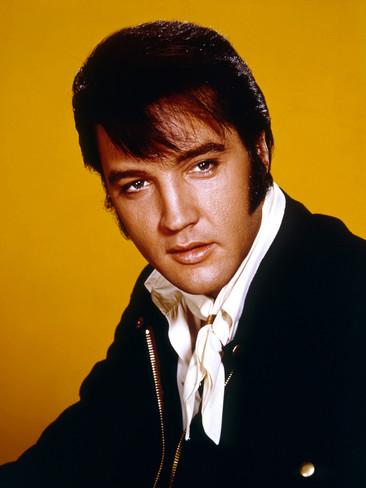 By 1969, Elvis was ready to reclaim his throne.

The 1968 Comeback Television Special put him right back up on top ... fans wanted more and Elvis was ready to give it to them.

After not touring for twelve years, the next stage of the comeback kicked into motion ... Elvis would return to the stage in Las Vegas, playing to sold out houses for the next several years as well as taking his act on the road again. (Truth is, Elvis had bombed in Vegas back in the mid-'50's ... but it was a different time ... and a different crowd ... back then. By 1969, the world was ready for Elvis again ... and he looked and sounded as good as ever.)

1968 gave him his first Top Ten Hit in over three years when "If I Can Dream," one of Elvis' most powerful readings, went to #9 in Cash Box Magazine. It was the grand finale of his Singer Television Special and showed Elvis at his strongest. 1969 would be even kinder.

Elvis knew that it was important that they keep this momentum going ... he had the world's ear again ... and his next batch of recordings HAD to continue to hold their attention. As such, it was decided that Elvis would return to his roots and start recording in Memphis again. The tracks recorded during these sessions would fill his next two albums ... and are considered to be among the best of his entire career.

He would hit The Top 40 FIVE more times in 1969: "Memories" (also from his TV Special) peaked at #24, "In The Ghetto" topped The Cash Box Chart in the spring, "Clean Up Your Own Backyard" (from one of Elvis' last contractually-obligated movies) peaked at #25, "Suspicious Minds" returned The King to the top of the charts with what has gone on to become one of his most enduring hits (we must still hear it four or five times a day fifty years later!) and he ended the year with a two-sided hit climbing the charts, "Don't Cry Daddy" / "Rubberneckin'", which would peak at #6 in early 1970.

1969 was a KEY year in Elvis' comeback ... the triumphant return to Vegas ... and a major presence on the pop charts was all The King could ever have hoped for. He was fit and trim and in excellent voice. In 1973 he would film his "Aloha From Hawaii" television special looking and sounding as good as he ever did. Hard to believe that just four short years later he would be gone.

But Elvis is STILL big business today ... tours of Graceland, merchandise and re-releases of his material account for hundreds of millions of dollars of income each and every year. His music will live on forever, long after all of us are gone.

When Elvis decided to go back to Memphis to record his new material after the TV Special, it was with the full intent of becoming a vital force in the recording world again.

But he tore up the TV Screen when he did his Singer Television Special in 1968 ... the world saw a raw side of Elvis that they hadn't seen in a long, long time ... an image that did NOT come across in his films. As soon as his contractual obligation was over (his last film, "Change Of Habit", co-starred Mary Tyler Moore as a Nun, who fell in love with a heavy-side-burned Doctor Elvis!), Elvis knew it was time to get back to where he once belonged. (Beatles-pun intended!!!)

The Memphis Studio run by Chips Moman had put together an incredible string of hits in the mid-to-late '60's and they felt that they could work their magic with Elvis, too, if he'd be open to the idea. For perhaps the first time in his career, Elvis put his foot down with regards to The Colonel and recorded HIS kind of music on HIS terms. For the first time, he pushed the envelope ... by recording a song like "In The Ghetto," Elvis was traveling down a road he hadn't traveled on before ... a "Message Song" ... and it caused a fair amount of dissension among his crew of advisors and hangers-on. At least three or four times, Elvis was talked in and out of recording the song, a ground-breaking hit for songwriter Mac Davis. In fact, at one point Moman decided to cut the tune with football great Roosevelt Grier instead, thinking that it might hold more impact coming from a black entertainer. In theory, it COULD have been Grier's break-through hit. Finally, after much deliberation, Elvis insisted that he would cut the record himself and, in the process, he scored his first #1 Record in seven years.

Also recorded at that session was "Kentucky Rain," a song that wouldn't be released as a single until early 1970. It peaked at #10 and gave Eddie Rabbitt a kick-start in his own musical career.

But the song that REALLY made the difference was "Suspicious Minds".

Incredibly, the song had just been released a few months earlier by its songwriter, Mark James, and made absolutely NO impact on the charts. In that Chips Moman had produced that record, too, he already had a pretty good idea as to what he wanted to do with Elvis' version. Actually, the arrangement remained pretty faithful to the original ... but there was magic in the studio that night and, after just four takes, EVERYONE present knew that they had just cut a #1 Record.  Elvis was back, baby!  (kk) 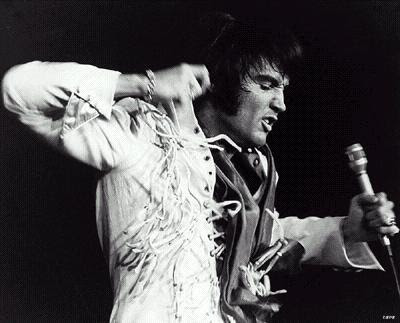 YA GOTTA WONDER: Chips Moman and his staff of cracker-jack studio musicians had put together quite an impressive string of hits over the years prior to Elvis deciding to record at American Studios in Memphis ... nearly a hundred in all, from the early hits of The Box Tops on through recent recordings by Aretha Franklin and Dusty Springfield (who cut her legendary "Dusty In Memphis" album there, ALSO released in 1969) ... so when Elvis decided that HE wanted to record at Chip's studio, it forced Moman to cancel or re-schedule a number of other previously booked engagements ... including one with Neil Diamond. Is it just a coincidence that one of the tracks Elvis recorded during these sessions was Diamond's "And The Grass Won't Pay No Mind"??? Or was this "part of the deal" to get Neil to reschedule his sessions? Or maybe it was just Elvis' way of saying "Thanks."

(According to Ernst Jorgensen, who documented ALL of Elvis' recording sessions in his EXCELLENT book "Elvis Presley: A Life In Music - The Complete Recording Sessions" this was, indeed, a deal struck between Diamond and Moman ... the unknown factor is whether or not Elvis knew anything about it!)

It is also a little bit surprising to hear that, despite the tremendous results of Elvis' sessions here, he never returned to record at American Studios again. (After four National Top Ten Hits ... "In The Ghetto," "Suspicious Minds," "Don't Cry Daddy" and "Kentucky Rain" ... TWO of which went all the way to #1 and completely rejuvenated his recording career ... you don't go back to the studio and producer who did all of this for you??? That seems just a little bit odd, doesn't it???)

The truth is, this may have had more to do with some of the politics and arguments going on behind the scenes than anything to do with a lack of respect for the success of the music. When Moman refused to give up any share of the publishing for the songs he brought to the sessions ("Suspicious Minds" in particular) ... a common practice for pretty much everything that Elvis recorded, giving Elvis and The Colonel a piece of the action ... it pretty much killed any chances of these two working together again.

Reportedly during one heated exchange, Chips told them to take a flying leap ... and threatened to block the release of any of this new material, telling The Colonel that he could just chalk it all up to being just one VERY expensive demo session. Bottom line was Moman was holding his ground and was NOT giving up ANYTHING in the way of publishing. After the dust finally settled, he reportedly told The Colonel, "Don't EVER come back to this studio again"... and after that exchange, they didn't!

And, just for fun, both the Elvis and the Mark James versions of "Suspicious Minds" ...