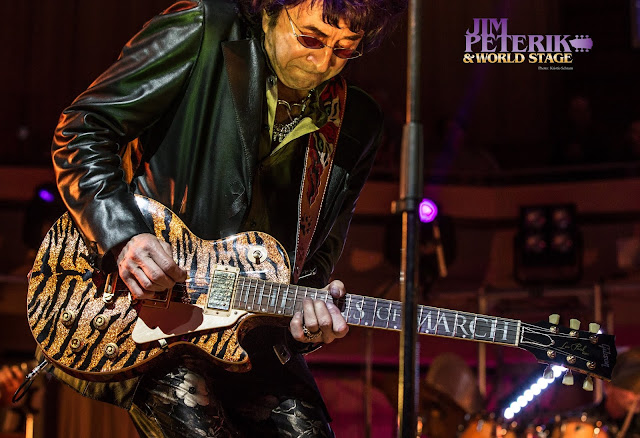 It was an incredible show, put on by an incredible array of singers and musicians, that had the whole place rockin' for three solid hours last Saturday Night (January 12th).

Jim Peterik has been presenting his World Stage Show at Wentz Performing Arts Centre in Naperville, IL, for the past 20 years now ... and every year he continues to mix things up musically in order to be able to offer the best variety possible (and yet still manage to sneak in a surprise or two along the way.)

Last Saturday's show was no exception.

First and foremost, a tip of the hat to the World Stage Band:  Mike Aquino on Guitar, Kelm Hayes on Bass, Christian Cullen on Keyboards and Ed Breckenfeld on Drums ... each and every one a stellar musician in their own right and, when put together, a force to be reckoned with on stage.

The band was augmented by The Ides Of March horn section ... Steve Eisen, Tim Bales and Henry Salgado ... and a trio of background singers that included Jim's son, Colin Peterik (who also performed a couple of songs of his own during the program), Leslie Hunt and Riley Patrone, both of whom were also featured as solo vocalists along the way. 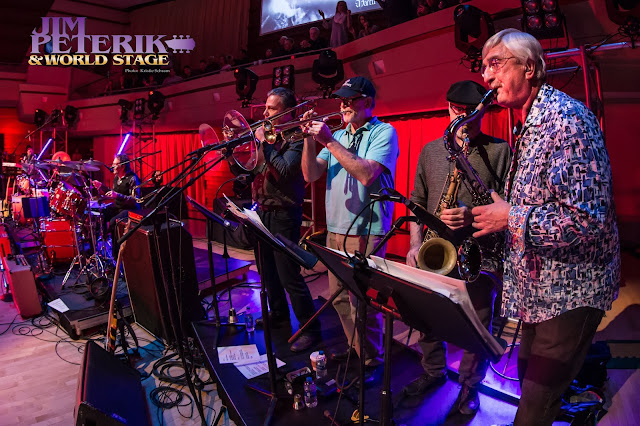 Speaking of The Ides Of March, they also performed together as a unit to open the second half of the show.  Kudos to Jim Peterik, Bob Bergland, Larry Millas and Mike Borch, who have been together now for 55 years ... and are the same original four guys who kicked this whole thing off in a Berwyn basement back in 1965.  Scott May, keyboard extraordinaire, is the "new kid" in the core band, having only been with them for 21 years. 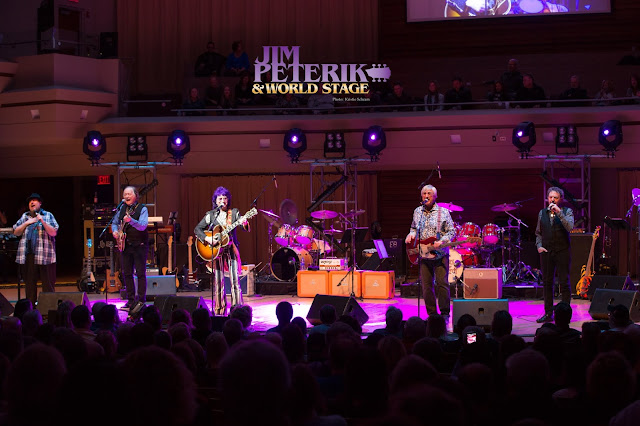 But wait ... I'm getting ahead of myself.

The show opened with a very solid Latin beat, reminiscent in feel of the recent Camilia Cabello hit "Havana" as well as the Santana classic "Smooth" ... which then morphed into the track "Night Of The World Stage."  (Man, this is a GREAT track!!!  I'd never heard it before ... you'll find it below.)  This was followed by a rockin' duet between Jim Peterik and Leslie Hunt on the Ides Of March / .38 Special hit "Rockin' Into The Night," which was then followed by a track Jim wrote with Sammy Hagar, "Heavy Metal," used in the movie of the same name.

And then we were treated to a nice sampling by each of the guest vocalists ... Toby Hitchcock (of Pride of Lions, who sang "Sound Of Home" and "Unbreakable"), Colin Peterik (of Fever Break, singing "Straight To The Top" and "My Secrets," both VERY contemporary-sounding tunes that I can't wait to download), David Pack (formerly of Ambrosia), followed by the tribute to Gary Wright we mentioned yesterday.  (Gary was scheduled to perform as part of World Stage but took ill and had to cancel ... so instead background vocalist Riley Patrone, with Gary's good friend David Pack on harmony vocals, did a beautiful version of Gary's #1 Hit "Dream Weaver" ... which Jim had streamed to Gary's computer so he could watch it at home.) 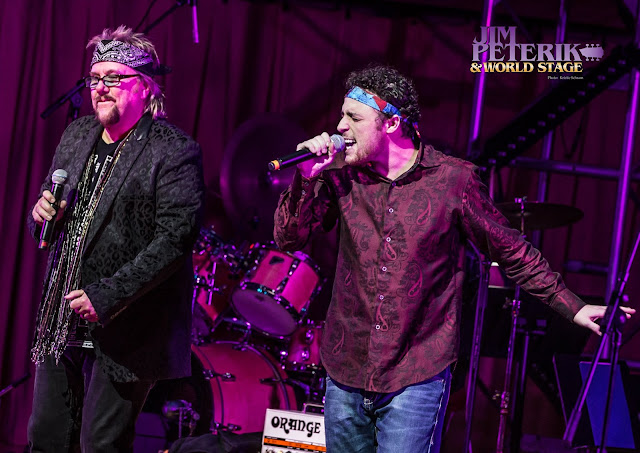 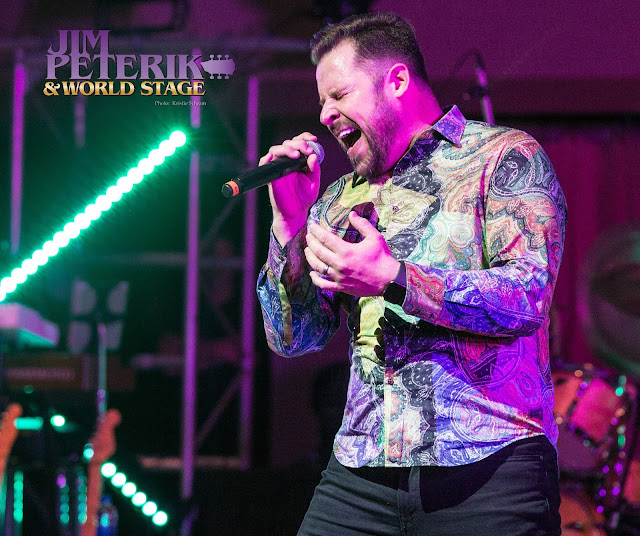 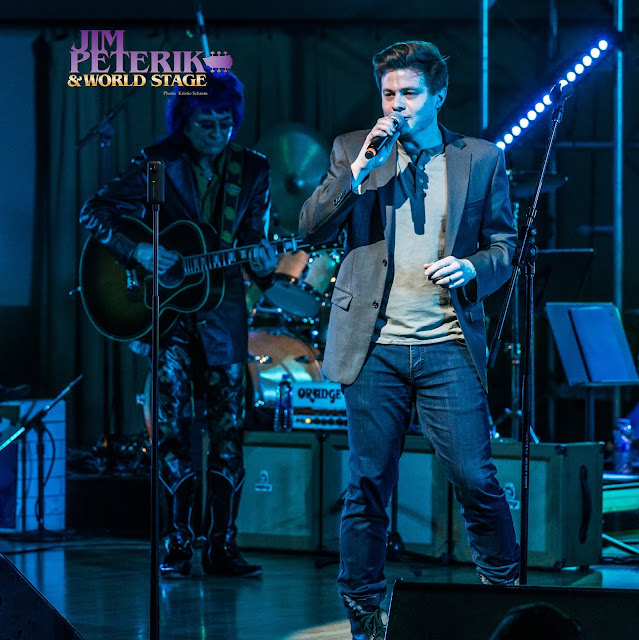 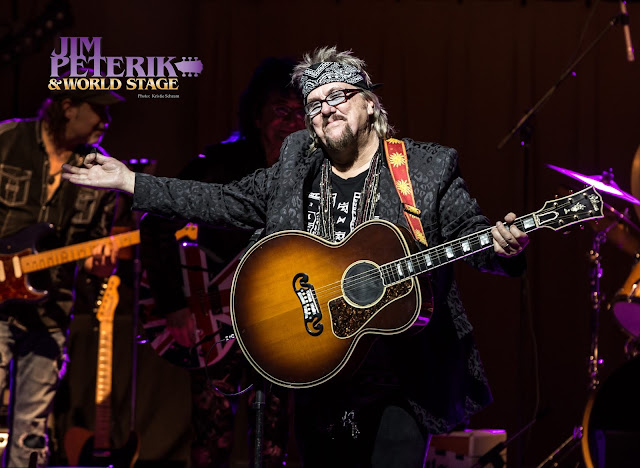 All of this was followed by Alex Ligertwood, formerly of Santana, who sang two of his biggest hits with the group, "Winning" and "All I Ever Wanted," a song that Peterik said nearly caused him to drive off the road the first time he heard it because it was so good. 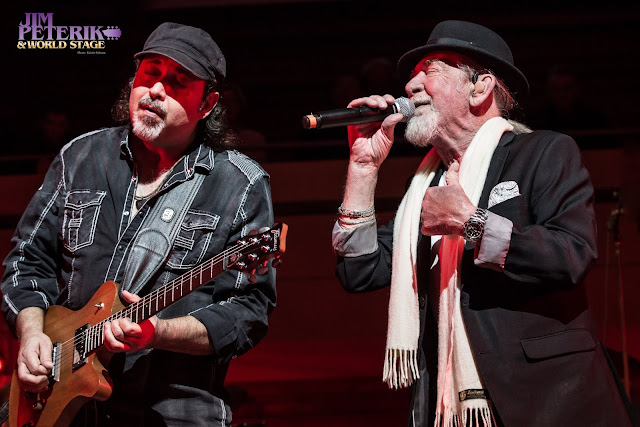 L-R:  World Stage Guitarist Mike Aquino (a show unto himself!)
and Alex Ligertwood, formerly of Santana

After a short intermission, The Ides Of March took the stage and performed "Live Life," "Pepperhead" (preceded by a great story by Jim Peterik about his sister's boyfriend who inspired the track) and their two big '70's hits "L.A. Goodbye" and, of course, "Vehicle."

Toby Hitchcock then returned to the stage to sing a few more of his own songs ("It's Criminal" and "Man Against The World") along with two Survivor hits for which is voice is perfectly suited for, "High On You" and "Can't Hold Back."

Next, it was the return of David Pack.  Between his two numbers in the first half of the show ("You're The Only Woman" and "Nice, Nice, Very Nice") and the pair he sang in the second half ("How Much I Feel" and "Biggest Part Of Me") David was able to offer up the full gamut of his best-known Ambrosia hits.  (He also told a very interesting story about how he was the musical director for one of President Clinton's inaugural balls and wanted to perform "Biggest Part Of Me" for this very special event.  Following protocol, he asked permission but never received an answer as to whether or not he would be allowed to do so.  Still having no answer by the night of the event, he asked a Secret Service Guard if he thought he should perform it anyway, to which the guard replied, "Well, if they didn't say no, that probably means yes."  lol  So, he kind of cued the band by singing "Make a wish, baby ..." just as The Clintons were taking the floor for their first dance.  Upon hearing Pack's signal, he went up to him and said "Man, I love that song!" assuring that everything would be all right from that point forward.  GREAT story!) 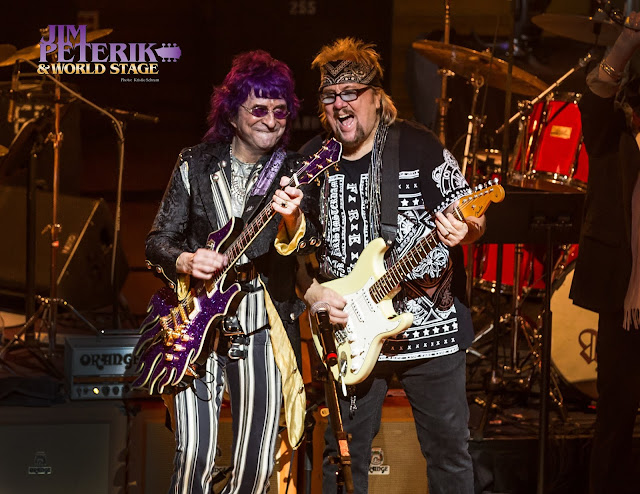 And then it was time to bring out the surprise special guest ... in this case, probably the worst kept secret as literally EVERY person I talked to before the show figured that it HAD to be Dennis DeYoung because the two were currently recording an album together ... and so it was. 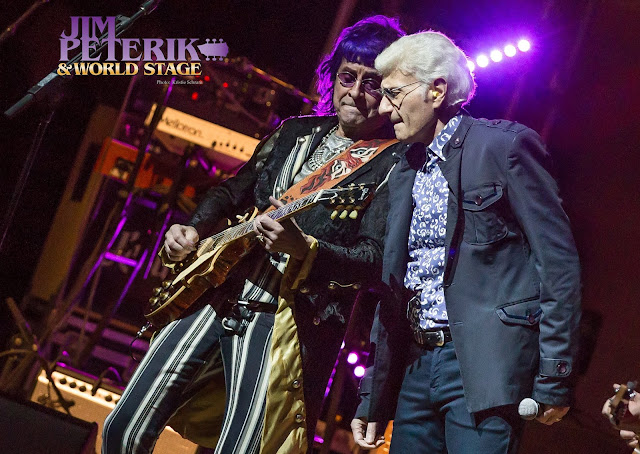 Dennis came out and traded sarcastic (and very funny) barbs for a little while and then explained that although he and Peterik have known each other for decades, they have never actually worked together on any specific project, offering up "So, Jim, you wrote what ... 2500 songs for me to sing???"  They then launched into an absolutely kick-ass version of "Come Sail Away" that again garnered full participation from the audience.  An amazing moment that was over WAY too soon.  (Rick Nielsen of Cheap Trick did a similar performance at last year's World Stage Show ... just a "one and done" moment ... but still a highlight of the show.) 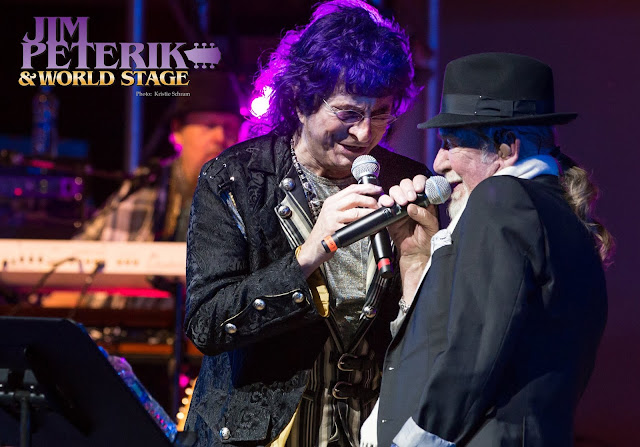 Next, out came Alex Ligertwood to do his second "you expect me to follow THAT?!?!" set, which he did quite satisfactorily, if I do say so myself.  (At one point, I whispered to Frannie, "Damn!  Will you listen to that little old man sing!!!") 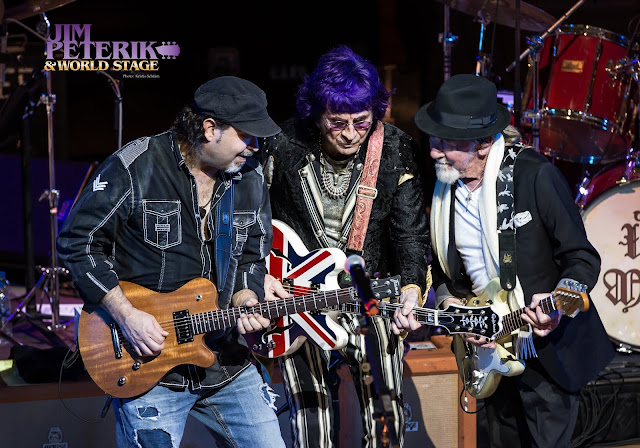 Trust me, this is meant as the highest compliment possible ... Alex's voice is every bit as powerful as ever ... and, after doing a song that he and Peterik wrote together a while back ("Luck Is A Lady"), he closed the show with a spot-on perfect Santana version of The Zombies' hit "She's Not There."  It was the PERFECT show closer (and I went home and listened to it three more times the very next day!!!) 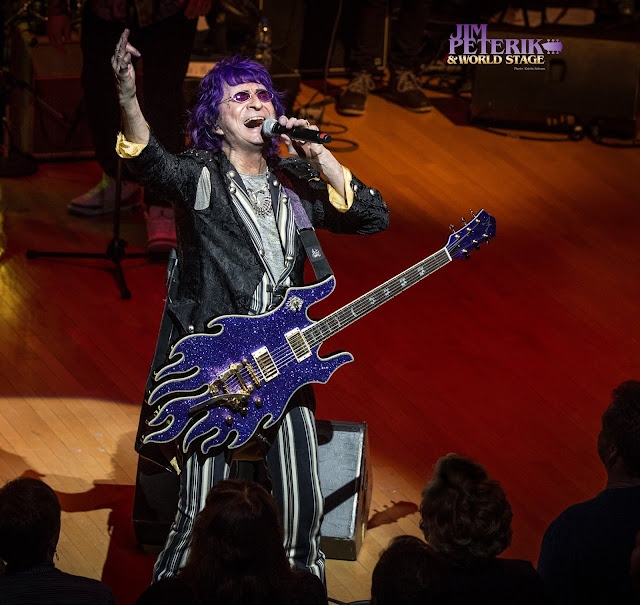 But c'mon ... you know the show can't REALLY be over without "Eye Of The Tiger," the money ticket that will keep Jim in purple hair to his heart's content for as long as he wants.  It was a full on, band ensemble, followed by the obligatory group bow ... and then another World Stage was under his belt. 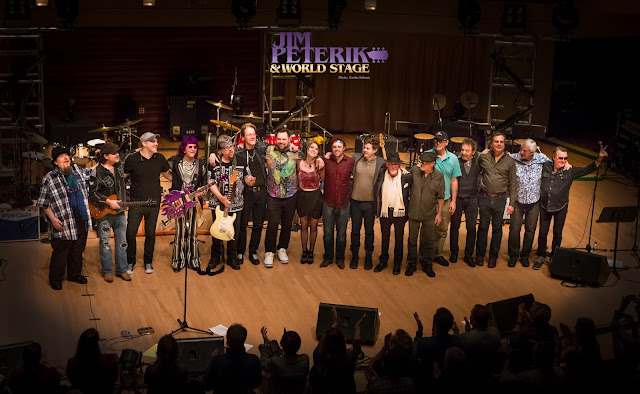 Will there be a second World Stage show later in the year?  (Last year there were two)

One can only hope ... and if there IS, you can bet you'll hear about it here in Forgotten Hits.

VERY SPECIAL THANKS to Jim Peterik for your on-going support of our efforts here in Forgotten Hits to help keep this great music alive ... and your generosity in the way of comp tickets and special access to these absolutely CAN'T MISS shows.

AND to Kristie Mayfair Schram, who took ALL of the photos used in today's concert review.  (She truly IS the Photo Ninja!)

NIGHT OF THE WORLD STAGE: