America's Original Sweetheart, Doris Day, had passed away from pneumonia.  She was 97. 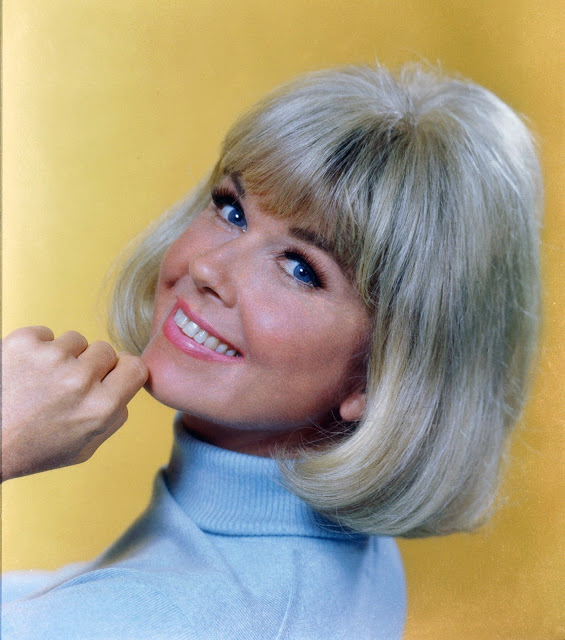 Doris touched all of our lives in some way over her 97 years.

She was the epitome of the "girl next door" ... the virginal princess in countless romantic comedies (many starring opposite Rock Hudson.)

Her singing career dated back to the 1940's, first as the female vocalist for The Les Brown Band (with whom she charted twelve times, including the Americana Classic "Sentimental Journey") before branching off on her own as a solo star.

She was the #1 Female Box Office Attraction for the better part of two decades ... and starred in her own television series as well.  Her only son, Terry, was adopted by Doris' third husband, Marty Melcher.  Terry would go on to become a successful record producer in his own right in the 1960's, working with Paul Revere and the Raiders, The Byrds, The Beach Boys (he cowrote their #1 Hit "Kokomo"), The Rip Chords and, in the early '60's, was also one half of the surf duo Bruce and Terry (the other half being future Beach Boy Bruce Johnston.)  It was to Terry Melcher's old house in the Hollywood Hills that Charles Manson dispatched a group of his followers to wreak havoc, ending in the murders of Actress Sharon Tate and four others.  (Melcher turned Manson down for a recording deal and Manson reportedly wanted revenge.)

One of the first celebrities to speak out after hearing the news was Paul McCartney, a Doris Day friend and fan for many years.


“She was a true star in more ways than one,” he wrote on his website. One of those ways was as a lifelong animal welfare activist.

The actress-singer was considered an early advocate of animal protection services and her love of dogs in particular earned her the nickname “the Dog Catcher of Beverly Hills.” She founded the Doris Day Pet Foundation in 1978, which evolved into the Doris Day Animal Foundation.


“Visiting her in her Californian home was like going to an animal sanctuary where her many dogs were taken care of in splendid style,” the Beatle wrote. “She had a heart of gold and was a very funny lady who I shared many laughs with. Her films like Calamity Jane, Move Over, Darling and many others were all incredible and her acting and singing always hit the mark. I will miss her but will always remember her twinkling smile and infectious laugh as well as the many great songs and movies she gave us.”

In an interview with Rolling Stone in 2016, McCartney quoted Day when discussing aging with David Fricke. “Doris Day, who I know a little bit, once said to me, ‘Age is an illusion’ … I reminded her of it recently – I was wishing her a happy birthday. People say age is a number. It’s a big number the older you get. But if it doesn’t interfere, I’m not bothered. You can ignore it. That’s what I do.”

Doris Day may not seem to be the type of artist typically receiving coverage in Forgotten Hits ... but over the past twenty years we have covered SO many topics that even she has come up a time or two.

This is something I found using the awesome search engine attached to the site ...


Before the music charts were driven by the latest sounds in rock-and-roll, Doris Day was hitting Billboard's Pop Vocal Charts, in a recording career that dates back to the early 1940's. (Incredibly, some of her mid-1950's recordings also competed side-by-side with those rock-and-roll hits of the day!)

Doris was born on April 3, 1922, in a suburb of Cincinnati, Ohio, as Doris Mary Ann Von Kappelhoff.

As a big band singer (first with Bob Crosby ... Der Bingle's kid brother ... and then, more famously, with Les Brown), she was already hitting the pop charts as a "featured vocalist" prior to pursuing a solo career. (Day's vocals graced the chart-toppers SENTIMENTAL JOURNEY and MY DREAMS ARE GETTING BETTER ALL THE TIME in 1945. Incredibly, she was only 17 years old when she first started singing with Les Brown's band!!!)

I love the whole counter-melody thing going on in this feel-good song ... I dunno, it makes me feel JUST like Pollyanna every time I listen to it!!! (And I'll tell you what ... this song would STILL sound good coming out of your radio every once in a while as one of those unexpected "Wow" factor songs!)

DIDJAKNOW?-1: Doris Day ultimately won a $22 Million judgment against Terry Melcher's adoptive father, Marty Melcher, who managed her career for 17 years. During that time, he either lost or embezzled most of her earnings and (after finding out that she was left completely broke after her husband's sudden death and then suffering a complete nervous breakdown), she won a court settlement filed against her former attorney in 1973, who was aware (and financially responsible) for all of Marty Melcher's dealings. Ironically, his last business deal committed Day to star in a television series, which she claimed she had no knowledge about and never would have agreed to. When the dust settled, she took the role, and ended up starring on her own (hit) television series for the next five years!

DIDJAKNOW?-2: Doris Day turned down the role of Mrs. Robinson in '60's classic film THE GRADUATE.

BONUS:  I aked frequent Forgotten Hits contributor THEONEBUFF (who just may be the biggest movie buff I know) to share a few thoughts on the movie career of Doris Day.

Here's what he came back with:

Doris Day, a band singer, a recording star and a good-looking young woman, was ideal for the movies of the 1940s and her transition into movie star was inevitable. In addition to having a great singing voice and a cute, freckled face, Doris had an admirable figure though it was often kept under wraps as she portrayed everybody's favorite girl next door. The idea was not to appear sexy, but wholesome. She had to be the good girl that contrasted with the slinky types, common to mainstream movies, that turned men's heads but were always a little bit rotten. Doris played the selfless, helpful, all-enduring, ever-faithful girl that the hero wound up with.

Her first starring movie was Romance On The High Seas (1948) and her leading man was Jack Carson. Jack was a fine actor but no big star. Doris, however, was heading directly for stardom. Two years later she was starring with Kirk Douglas and Lauren Bacall in Young Man With a Horn and in West Point Story with James Cagney in the lead. Five short years later she would be billed ahead of Cagney in MGM's Love Me Or Leave Me. In between she made a bunch of lighthearted musicals, usually with Gordon MacRae. In 1953, after the success of MGM's 1950 Annie Get Your Gun (with Betty Hutton) about a tomboyish backwoods girl who blossoms into a beauty (while singing a bunch of Berlin tunes), Warner Bros. trotted out Calamity Jane, about a tomboyish gun-toting girl who blossoms into a beauty (while singing a bunch of Fain-Webster tunes) They even borrowed Howard Keel, the male star of Annie Get Your Gun to play opposite Doris, just in case you didn't get the point. In this one Doris got to sing many pleasant tunes, a couple of cute tunes, and one blockbuster tune that became a big hit and won an Oscar. This was, of course, Secret Love.

In 1954 she appeared opposite hot, fresh from an Oscar win, Frank Sinatra in Young at Heart, a remake of Four Daughters. No new songs of lasting value emerged from that, but Doris got to play the ultimate girl next door and selfless heroine who marries the hapless and seemingly hopeless Sinatra character. She is cuteness personified in this one, even getting to close the refrigerator door with her fanny while carrying an armful of goodies. But she was close to getting away from that image. She had deviated slightly in 1952's April In Paris playing a chorus girl ("what a built!") but the big change was in Love Me Or Leave Me as Ruth Etting where she did a heavy dramatic role along with the singing. Her co-star was Cagney and he stole much of the movie, but Doris held up her end of the deal, too. Hitchcock cast her in The Man Who Knew Too Much and her scenes as a distraught mother of a kidnapped child are well done. Later she found a new partner, Universal's Rock Hudson, and they made three fine comedies together, Pillow Talk, Lover Come Back and Send Me No Flowers. For the first of these, Doris got her only Oscar nomination for Best Actress. Doris got to pilot an airplane in "Julie," is menaced by husband Rex Harrison in Midnight Lace and went back to comedies opposite Cary Grant (That Touch of Mink) and James Garner (The Thrill of it All, Move Over Darling). There were more movies but the big days were behind her. She had done it all and once reigned as Hollywood's Box Office Queen. This is a personal memo, because I personally liked Doris Day and most of her movies.

My only research was a list of films, which helped jar my memories. She remains a favorite. Doris Day had one of the purest singing voices of all time. Had she chosen to, she could have become one of those jazz chanteuses who reap high critical praise and damn near starve to death. Since she chose to make a profitable career she often gets snubbed. But I have heard her sing ever genre (her jazz recordings with Andre Previn are sublime) and do movies of every stripe (from Hitchcock to high comedy) and I think she is a treasure.
Hil  (THEONEBUFF)

When Doris Day published her "tell-all" biography in 1976 ("Doris Day: Her Own Story") she talked openly about her money troubles and three failed marriages.
"I have the unfortunate reputation of being 'Miss Goody Two-Shoes,' 'America's Virgin,' and all that, so I'm afraid it's going to shock some people for me to say this, but I staunchly believe no two people should get married until they have lived together," she wrote.  (That raised more than a few eyebrows at the time!)

Here is a link to a very nice piece written by Joe Marchese (who had the honor and privilege of writing the liner notes to some Doris Day CD compilations) ...
https://theseconddisc.com/2019/05/in-memoriam-doris-day-1922-2019/
Posted by Kent Kotal at 6:00 AM