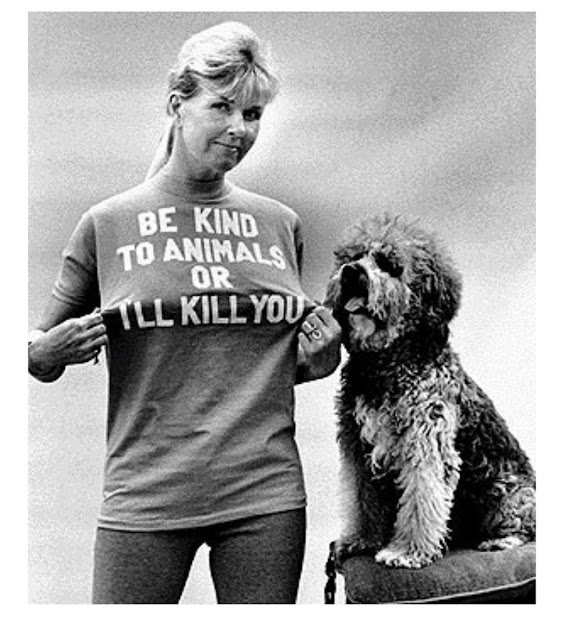 >>>One of the first celebrities to speak out after hearing the news was Paul McCartney, a Doris Day friend and fan for many years.   (kk)

kk –
It doesn't seem like these two would be friends.
FB
https://www.telegraph.co.uk/culture/music/rockandpopfeatures/8733533/Doris-Day-and-Paul-McCartney-in-conversation.html?fbclid=IwAR0wU0XF7iaxDeP4-WV0epruO4sRst50qotTz7xy1Y7hdyc3hSMBQwSy-30

Oh, I don’t know about that … both Doris Day and The McCartneys were HUGE animal rights activists … and Paul grew up listening to this kind of music and fell in love with it as a kid.  (Keep in mind he’s the guy who “peppered” The Beatles’ catalog with 1920’s-sounding hits like “When I’m 64,” “Your Mother Should Know,” “Honey Pie” and the like.)
Family sing-alongs were always a big thing in the McCartney household … and they still sing a few rounds of these early classics when they get together in the pubs in Liverpool to this day.  (Check out the James Paul McCartney TV special from 1973 or, more recently, his Carpool Karaoke return home visit with James Corden.)
I think this is a GREAT interview, by the way.  I love the fact that Paul is interviewing Doris … asking the things HE would like to know more about.  (When you think about all the interviews McCartney has done in his lifetime … tens, if not hundreds of thousands … it’s interesting to see the tables turned and find out the kind of questions he put together on his own.)
I’ll never forget one of the most striking interviews I ever read with The Beatles … and think about this … at the peak of Beatlemania in 1964 they traveled the world and were besieged in every city not only by teenage girls but also by television, newspaper and radio reporters, sticking microphones in their faces, trying to capture just a unique word or two with one of The Fabs.  Most just wanted the same information … everything from “When are you going to get a haircut?” to “What kind of girls do you like?” to “What’s your favorite color?” to “What’s your favorite food?” … again and again and again ad nauseum.
At one of these insane, madhouse session, John Lennon was asked “Can you think of a question you haven’t been asked yet?” … pretty heady stuff for a 24 year kid thrust into the worldwide spotlight and living the life of non-stop celebrity … to which he replied “No … not even that one.”
The fact that this interview took place exactly ten years ago is perhaps the more amazing part.  Doris was releasing a new album, featuring songs written by some of the most contemporary artists of the day.
Paul, several years before, had written and produced a song for another one of his early female idols, Peggy Lee.  (“Let’s Love”)  If anything, I'm surprised he didn't give her a track to record for the new LP!
So again, he had a definite affection for this era of music.  (Think, too, about his recent “Kisses On The Bottom” recording of standards that he says helped to inspire the Lennon and McCartney songwriting team way back when in those very early years.)
The fact that he loved those old-time movies (and even turned his kids on to them) is also pretty cool.  (kk)

She was a true star in more ways than one.  One of those ways was as a lifelong animal welfare activist.
Visiting her in her Californian home was like going to an animal sanctuary where her many dogs were taken care of in splendid style.  She had a heart of gold and was a very funny lady who I shared many laughs with. Her films like Calamity Jane, Move Over, Darling and many others were all incredible and her acting and singing always hit the mark. I will miss her but will always remember her twinkling smile and infectious laugh as well as the many great songs and movies she gave us.
She once said to me, ‘Age is an illusion’ … I reminded her of it recently – I was wishing her a happy birthday. People say age is a number. It’s a big number the older you get. But if it doesn’t interfere, I’m not bothered. You can ignore it. That’s what I do.
-- Paul McCartney

Condolences to the family of Doris Day. She was the World’s Sweetheart and beloved by all.  Que Sera Sera
-- William Shatner


This morning I was saddened to learn that Doris Day who starred in a film I had written "The Thrill Of It All" had passed away at 97. Just a week ago, I contacted her and welcomed her to the 97 Year Actor's Club.
-- Carl Reiner


The great Doris Day left us and took a piece of the sun with her. She brighten our lives and lived out her life with dignity. May she rest peacefully.
-- Goldie Hawn

For those of us in my generation, Doris Day was synonymous with Hollywood icon. She would no doubt remind us, upon this day of her passing, “Que sera sera,” but we will miss her dearly anyway. Rest now in our hearts forever, Ms. Day.
-- George Takei


A Cincinnati girl just like me,” Parker wrote on Instagram. “How many letters I drafted to you and didn’t send. I could never get it right but they all said the same thing: I love you. Millions did and do.
-- Sarah Jessica Parker


Really difficult to state just what a huge influence this woman was on me during my early years. She gave me hope a woman could be strong, funny, and successful.
--Melissa Etheridge


Doris Day was great actress & a lovely, gracious lady. My condolences to all who loved her. My prayers are with her family & loved ones. She was a dedicated protector of animal rights & animal welfare on top of her wonderful voice and amazing on screen talent. She will be missed.
-- Gloria Gaynor


Susan and I are saddened to hear of Doris Day’s passing. She was a wonderful friend to us and a lovely and very talented lady. We will miss her beautiful smile and it was such a thrill to appear on The Doris Day Show back in 1970.
-- Tony Bennett

Bravo wonderful Doris Day on a life beautifully lived. Thank you for the great gifts you shared with all of us, they will live forever.
-- Mitzi Gaynor

One of my all time favourite stars has joined the heavenly choir. Rest in Peace the great & inimitable Doris Day. The last star of the Hollywood Golden Age. We'll bid you farewell by the Light of The Silvery Moon, but you will always be Young at Heart to us forever.
-- Elaine Paige
Posted by Kent Kotal at 6:00 AM