Brian Wilson is an American treasure. Wish I was there at the Capitol Theater. He is Why God Made The Radio.

It appears you and I have one of the few pictures of Brian smiling!!! 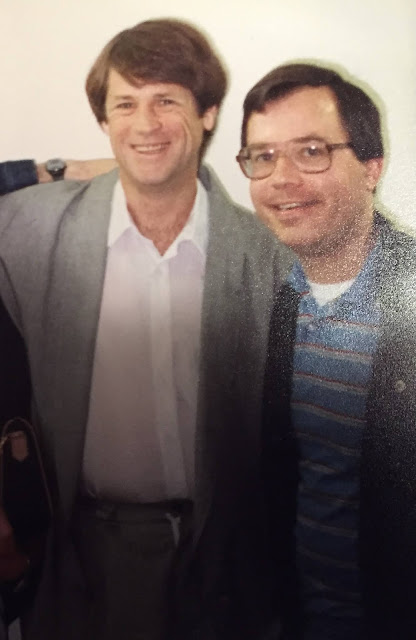 Wow!  Yours looks like a real oldie but goodie! (lol)

Honestly, the night I met him, it might just as well have been a wax statue (and he almost comes across looking that way in the photo!)

I was backstage visiting with Jeffrey Foskett and then the “Meet and Greet” came through.  Between Jeff and Ron Onesti, they made sure we got our pictures taken, too. (In fact, my daughter and son-in-law were there for the show as well, and also have a Brian Wilson photo keepsake from this event.  He's smiling in THIS one, too!) I’d really love to see him in action … in the studio.  On stage he just seems so removed and distant … almost like it’s the last place he’d like to be … but in the studio, he just seems to fall right back into that pattern of being in charge and complete control … and knowing exactly what he wants and how to get it.  It's a Night and Day difference.

(So is the 2022 rumored tour with McCartney?  They’ve been talking about doing something together for YEARS now!!!)  kk

Look forward to his new documentary coming out and his concert with the still to be named legend!!!

Thank you, Kent, for keeping the music alive!!!

Yesterday we ran some beautiful photos of Brian Wilson performing at The Oakdale Theater in Wallingford, CT, taken by FH Reader Brad Joblin …

And told you that Brad was also editing a video of Brian singing “God Only Knows” from that concert.

Well, today we’ve got a very special, exclusive link to that performance that won’t go “live” on YouTube until next week …

So Forgotten Hits Readers get to see it first before anyone else.  (Well, except Brad’s wife and son, of course!  Lol)

Check it out and see what you think …

Here is the link.  It's not edited but it's not really a big deal. I'll give you the unedited clip which starts with the last minute of Sloop John B (I rolled my camera early to make sure I got all of God Only Knows).  May you and EVERONE in FH land enjoy!

The performance, however, leaves me sad.

As Tom Cuddy alluded to yesterday, fans going to see a Brian Wilson concert today pretty much know what to expect ... and, unfortunately, what NOT to expect ... of the experience.

Today, it's much more a case of showing our appreciation for the legend, the magic and the genius that he shared with all of us throughout our lives.

As this video proves, you're not going to be blown away by his vocals or stage presence.  Yes, his stellar band helps a great deal in making it all palatable ... but you're not going to hear Brian Wilson sounding much like Brian Wilson these days.  (We've been making the same comment about Paul McCartney's voice for nearly twenty years now.  A big difference, of course, is Paul's enthusiasm to still get up there and entertain ... it has never waned in the 65 years he's been getting up on stage to rock and roll us.  Brian NEVER liked touring ... and just looks uncomfortable up there.  If I'm right ... and these are the two legends teaming up for a concert tour next year, it could be a somewhat painful listening experience ... but how could you NOT want to go?!?!)

Funny, because you watch The Stones, who are every bit as old, yet just seem to keep on Rolling.  And having a blast.  Mick Jagger has made as many headlines for his appearances OFF stage in the various cities The Stones have visited as he has for their still-brilliant on stage performances.  Even a fossilized looking Keith Richards still appears to be having a blast up there, much like McCartney, still processing that teenage soul that spurs them on and got them into music in the first place.

I think the reason it's painful to see Paul and Brian suffering up there is because of how beautiful their voices once were ... and what perfectionists they were in the studio, making certain that EVERY note came out just right, now matter how long it took to achieve that goal.  So it hurts to see them now, both well past their prime, still traveling around the world to show their diminished wares to an appreciative audience ... sort of like Sinatra with a back beat.  For his last twenty years, you didn't go to hear him sing so much as simply be in his presence.

Fortunately, the music and the memories supersede everything else ... and we can all bask in the memories ... and by all, I mean even the guys on stage.  (kk)