Tuesday This And That: CHART TALK EDITION

>>>Just one of MANY anomalies we have seen on Billboard’s Year-End Charts over the years … but incredibly, it’s true.  Looking at “Tired Of Being Alone” (which, as you mentioned, peaked at #11 on Billboard’s Hot 100 Chart … and only stayed there one week) … it finished at #32 in Cash Box for the year and did not make Record World’s Top 20 Biggest Hits of the Year list (which is all that they published in 1971.)  In Dann Isbell and Bill Carroll’s book “Ranking The ‘70’s” … which uses a much more sophisticated version of the progressive point method I mentioned earlier … it is ranked at #57 for the year.  To put that into the proper perspective, “Ranking the ‘70’s” awards it 2345 points for its #57 showing.  Their #12 Record of the year … “Gypsys, Tramps And Thieves” by Cher … earned 5737 points … or nearly 250% more points than the Al Green hit.  By absolutely NO measurement should this song have wound up as the 12th Biggest Record Of The Year in 1971!!!  Perhaps the worst extreme was in 1965, when they named Sam the Sham and the Pharaohs’ hit “Wooly Bully” the #1 Song of the Year, despite the fact that it never even made it to #1 during the course of the entire year. No how, no way will you ever convince me that Sam’s two weeks at #2 earned more points than The Rolling Stones’ FOUR WEEK RUN at #1 with “Satisfaction,” the song that is most universally accepted as The Biggest Record of 1965!  (Likewise for “Yesterday” by The Beatles, also a four-week #1 record.)  Other MAJOR hits from ’65 include “You’ve Lost That Lovin’ Feeling” by The Righteous Brothers, “Downtown” by Petula Clark” and “My Girl” by The Temptations.  Does ANYBODY out there really believe that “Wooly Bully” was a bigger chart hit than any of these tunes???  (kk)

Jumping in on the Year-End Charts controversy:

EXACTLY!!!  So in what universe does “Tired Of Being Alone” earn a #12 ranking for the year in Billboard Magazine???  (kk)

From FH Reader Larry Neal, the KOMA Year-End Chart for 1971 … 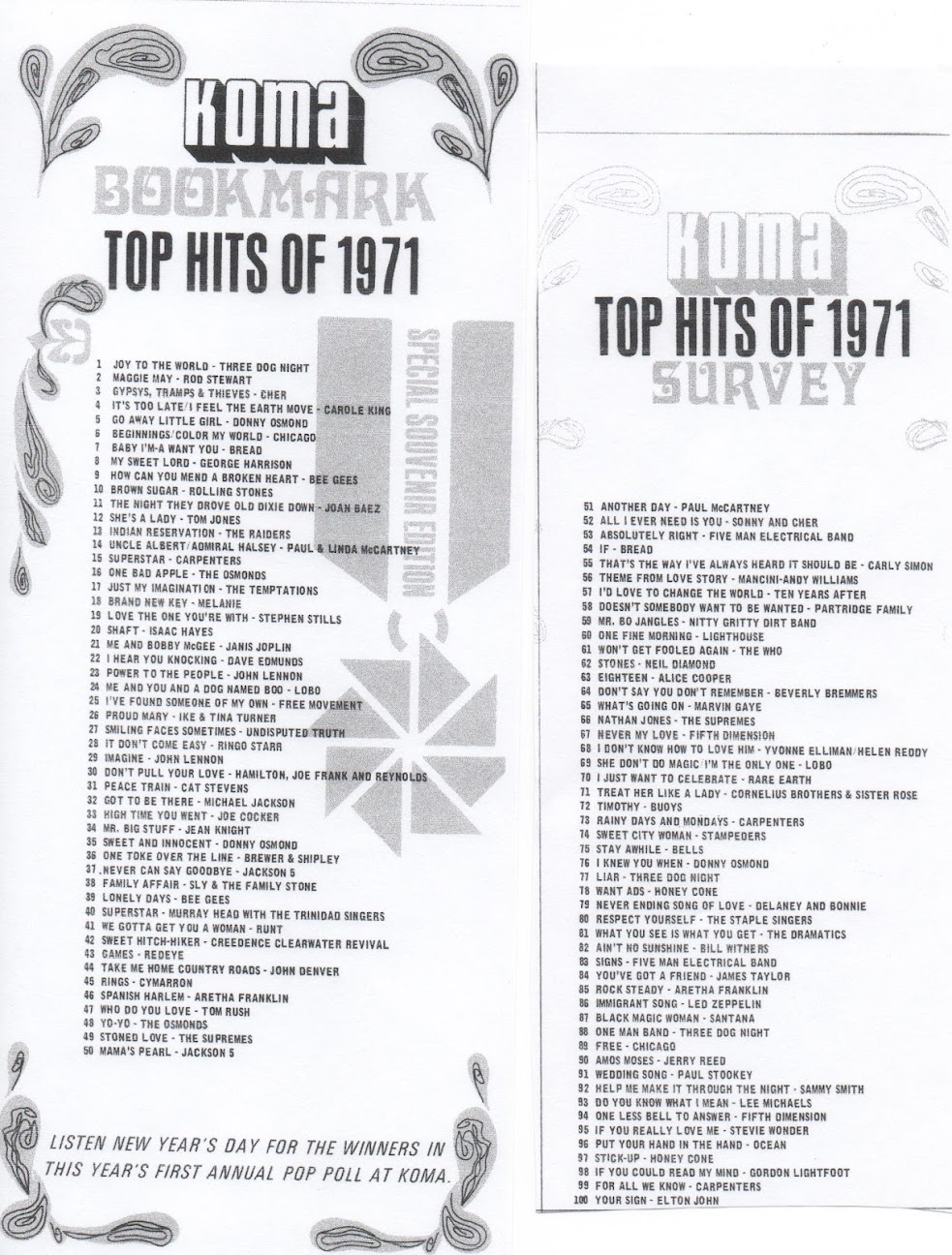 Back then, most of the big Top 40 stations issued their own year-end charts.  (You’ll find our Chicagoland charts posted below for WLS and WCFL.)  There were always some unusual surprises on these as well.  ‘LS posted their Big 89 (which is how they billed themselves at the time at 890 on the AM dial) while Super ‘CFL kept it short but sweet with their year-end Top 40.  (kk) 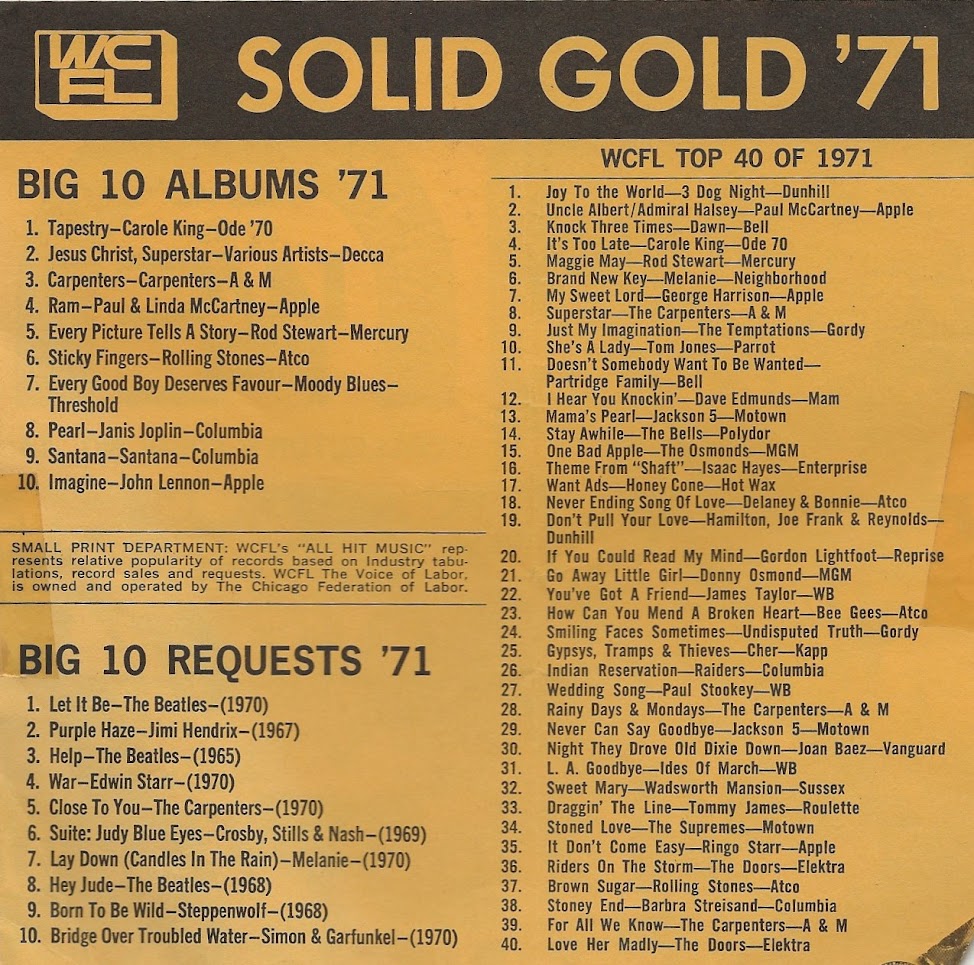 We did get a wonderful dose of Canadian radio, and we also got to hear KQWB out of Fargo. It was a great station and, as you saw via the survey, they played a nice variety. They also had an FM station that did a pretty good job of album rock, too.

Both the AM and FM stations had great DJ’s, too.

Herb was a beloved morning DJ for decades in New York, on (sequentially) WMCA, WABC and WCBS-FM.

His “Hello Again” was something he played regularly on his shows.  I believe he always opened with it, but I’m not sure.

As far as I know, it was never released as a recording you could buy.

The fact that it appears on the Rewound Radio hit list is more a reflection of the survey participants fondness for Herb the DJ, rather than thinking it was a great rock’n’roll record.

That's really cool coming from your site.  Thanks so much!

One of my goals with Rewound Radio is to show how much fun it can be even for those who weren't there at the time.  I don't want it to be just a nostalgia thing.  I know it's a long shot, but every so often I get e-mails from younger people who think it's fun.  That's when I know we're making it work.
One thing about oldies -- it's the most fun music ever made.
Thanks again!

I have no doubt that the generations that have come along since we all experienced this great music are falling in love with it as well ... I see evidence of this all the time.

The fact that so many artists have been selling their catalogs of late helps to ensure that this music will stay with us for a long, long time to come.  (These are huge, huge investments that these companies are making ... the only way they will ever reach a payback is by keeping this music out there in one form or another.  That means new people being introduced to it every day for many years to come.)

Hey, I just found your page about the Top 3,333 Classic Rock Songs after viewing your amazing Rewound Radio Top 77 page. I always like great countdowns.

Anyway, would it be possible if you could email me the complete Top 3,333 Classic Rock countdown list?

Thanks in advance. Here's wishing you a Happy and Safe 2022.

All this countdown talk has drummed up some renewed interested in our TOP 3333 MOST ESSENTIAL CLASSIC ROCK SONGS OF ALL TIME list from a couple of years ago.

You can view the website countdown here:  CLASSIC ROCK ESSENTIALS …

Or ask for a complete list via email … just shoot me a note at kk@forgottenhits.com … and we’ll get it right out to you!  (kk)

From an exchange between FH Reader Rich Klein and Jon Wolfert …

You are correct about “Hotel California” ... but at the outset I said I would play a group's highest ranking song "most" of the time.  When it came to the Eagles, I played their second highest song, "Take It Easy."  When I got to the Beatles on that same list, I didn't play their top song either (“Hey Jude”) because I knew it would be in another countdown at the end of the show.

Thanks and happy new year.

Join me on Sundays from 3-6PM Eastern for great jingles and the best music, live on Rewound Radio

I found your look at the Rewound Radio 2021 favorite tunes to be quite interesting.

Decades later, it seems that one person's favorite oldies are another person's burnt out tunes.

Your comments on the Rewound analysis indicate you are more than glad to hear songs you haven't heard in ages or perhaps never before ("Hello Again.")

I've been compiling a register of songs from the 50s and 60s that were hits or almost hits in some significant regional area of the U.S. and/or Canada, based upon radio station surveys for many years. There are well over 8,000 song listings along with supporting data, a few of which showed up in your Rewound analysis.

I've been retired from radio for 15 years after having last worked for Sirius Satellite Radio (pre-merger) for just over the first four years of its existence, primarily on the 50s, 60s and 70s channels.

With You Tube, it's possible to listen to almost all of these compilation songs, which could be a fun exercise in and of itself.

Hope you find this interesting and I would welcome any comments.

Several years ago we did a month-long series in Forgotten Hits called "Show Me Your Hits" ... and then ran a bunch of surveys and sample songs that made the Top Ten in various parts of the country that barely made a dent (if any) on the national charts.

Being from Chicago, we had a TON of these ... HUNDREDS and HUNDREDS that never got recognized beyond our two Top 40 giants, WLS and WCFL.  I remember spending a week on Louisville as well ... and discovered a bunch of GREAT new music I would have never even known existed otherwise.

You would think that some of the long-standing radio stations that are still around would embrace their past and heritage and feature some of these long-lost gems from time to time ... as their audience just might be the only ones around who'd recognize and appreciate any of it!  Sadly, we both know that that's not the way radio works these days ... and this is why Rewound Radio is such a blessing.  I can't tell you how many times I've emailed in a request to hear something like "I'm Just Waiting, Anticipating" by The New Colony Six or "Up On The Roof" by The Cryan' Shames ... and they jump on it immediately because they HAVE all this great music at their fingertips.  I can't think of any radio station that does it better ... or caters to their audience more.  It’s the pure love of this music that makes it so very special to all of us.  (Again, check out our list of THE TOP 3333 MOST ESSENTIAL CLASSIC ROCK SONGS OF ALL TIME … you’ll find songs on there that haven’t been played on the air in DECADES … yet the fans remember … and want and expect more from their radio stations.)  kk

>>>I don’t know if you know or remember that record by the Addrisi Brothers from back in 1959 called CHERRYSTONE on Delfi Records. I vaguely remember them lip-syncing that one on Bandstand.  (Larry Neal)

Just walked by the other WRCO-FM Studio and see that Cherrystone by the Addrisi Brothers is getting ready to play!

I swear sometimes I think my life is bugged!  (lol)

Or, perhaps on a more positive note, the whole world is reading Forgotten Hits!