Unlike most people out there, I've long (going back at least forty years) considered him, not Elvis Presley, to be the true King of Rock and Roll.

Admittedly, Elvis Presley's releases on the Sun label were incredibly ground-breaking, but those releases weren't noticed much at the time, other than a couple of the songs being noticed by country-and-western audiences mostly in the South.  Also admittedly, it was Chuck Berry, along with Little Richard and Bo Diddley, who blasted rock and roll WIDE OPEN in 1955.

Bill Haley and His Comets did get some airplay before 1955 - I actually can REMEMBER hearing his 1954 release of Shake, Rattle and Roll.  (Yes, guys and gals, I'm old - LOL!)  Two years later, the movie "Blackboard Jungle" would bust THAT song wide open - along with Elvis beginning to have his own massive chart successes.  Thus 1956 was the year that it finally became "cool" for White artists to do rock and roll which, other than that early Bill Haley airplay, was nearly exclusively the domain of Black performers.

In my younger years, it was always "Sh-Boom" (and usually the Crewcuts version rather than the Chords!) from 1954, that was considered the first rock and roll song.  No, not even close.

The debate of the first rock and roll song will never be resolved … we’ve traced its roots to the 1920’s!!!  Literally HUNDREDS of titles have been suggested as being the first … all with some element of legitimacy.  But the first rock and roll song that mattered and made a difference was “Rock Around The Clock,” thanks to “Blackboard Jungle.”  That’s the song that ushered in The Rock Era.  It was literally the shot heard ‘round the world … and every act that has come around since has at least some element of dna in their make-up.

The fact that Chuck Berry was WRITING these songs that were so revolutionary is a key factor as to why his contribution was so important.  Yes, Elvis was the poster child … pretty … and WHITE … a BIG factor back then.  (There was NO way they were going to let a goofy-looking guy like Bill Haley … or a Black Man like Chuck Berry or Fats Domino or Little Richard … lead the rock and roll revolution!)

I have long maintained Rock and Roll Music done FAR more to erase bigotry than any politician or movement in history.  For the very first time, this was OUR music … and we LOVED all the R&B influences that helped mold rock and roll.  (kk) 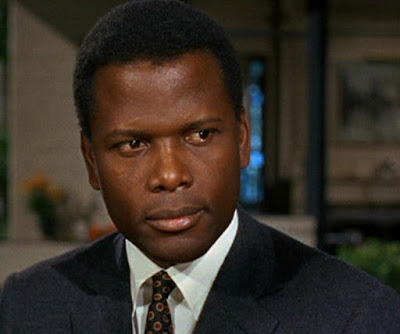 We just lost one of the greatest actors of our time …

Sidney Poitier passed away this week at the age of 94.

It’s hard to even begin to count the number of films that he made that touched my life in some fashion … truly one of the all-time greats.

His work as an activist took him well beyond the silver screen … and he was beloved around the world.

He was the first Black Man to be nominated for … and then later win ... an Oscar … and was also the recipient of The Presidential Medal of Freedom.  He marched alongside Dr. Martin Luther King at a pivotal time in our nation’s history.  He fine-tuned his craft as an actor to become the consummate best in his field.  (As such, we can almost forgive him for “Uptown Saturday Night!”)

If I were going to list my ten personal favorites from his incredible body of work, the list would probably shape up something like this … in some cases more because of the impact these films made on me at the time than perhaps a gauge of Sidney’s best or most meaningful performances …

We love you, Sidney … thank you for enriching our lives.  (kk)

Best Classic Bands ran a beautiful tribute to Elvis Presley yesterday on what would have been Elvis' 87th birthday.  It gathers quotes from some of the biggest names in music, collected over time and pays tribute to and shows appreciation for The King Of Rock And Roll ...

Elvis Presley: What They Said About the King | Best Classic Bands

With a number of television shows suspending production again due to the crazy new Covid numbers, expect more concert events to be impacted as well.

Frank B. tells us that Billy Joel just moved his scheduled January Madison Square Garden date back to July …

"Nothing is more important to me than the safety and well-being of my band, crew, and the fans; so due to unfortunate COVID-related circumstances, we made the decision to reschedule the January 14th concert at MSG"

And yet The Eagles have just added a dozen new dates to their Hotel California Tour (and yes, Chicago is FINALLY on the list with a March 19th stop at The United Center.)

I’ve really got mixed emotions about this whole thing … would love to see them one more time (as we’ve never seen the band with Vince Gill and Deacon Frey) … but the expense of doing so … not to mention the health risk … just may make this one of the shows we hate to miss.  (kk)

NEW DATES (with tickets going on sale January 14th … note:  some of these tickets will NOT be available thru Ticketmaster – see **):

Tickets for these previously announced dates are still on sale:

Tickets for most shows will go on sale on January 21st …

But here is the list as it currently stands:

More dates are expected to be announced.  (kk)

I just got a lifetime membership into the Illinois Rock N Roll Hall of Fame Museum.  Thank you for the info.  Illinois Top 40 music and radio has been most of my life and this is a great tribute.  Thanks to all for making Illinois music and radio my dream world.

What station will Ken Kojack's countdown of January 4,1964 be on as WRTR says that that show is on Tuesday nights.  Let me know so that I can hear it tonight.

The program aired on Tuesday Night (January 4th) … checking the WRTR website, I don’t see any archive or podcast options for this program … but I have reached out to Ken to see if there are other ways listeners can still catch his show.  (You’re not the only one to ask!)  As soon as I hear something back, I’ll post the info here.  (kk)

UPDATE:  There is evidently no archive show currently in place … but I CAN tell you that THIS Tuesday’s show will celebrate what would have been Elvis’ 87th birthday!

Again, you can tune in here to listen … but you’ve got to catch it LIVE!

Peter Jackson’s The Beatles’ Get Back will be released on DVD and Blu-Ray February 28th and it is going to disappoint.

Disc 1 – The band gathers at Twickenham Film Studios to rehearse for a concert.
Disc 2 – Rehearsals continue at Apple Studios and the mood lifts.
Disc 3 – The Beatles perform on the roof of the Apple Offices

We certainly were expecting a lot of extra footage on the DVD release.  (At one point I heard there could be as much as 16 additional hours available!)  At the very least, it would have been nice to package this along with a cleaned-up version of the original “Let It Be” movie … but I think this was rushed out for release so quickly that all of this fell by the wayside.  My hope is that “Let It Be” will still get its own special promotional release package at some point in time … but some feel it may be lost to the ages due to the current powers that be at Apple ... and that’s a shame … because THIS is the cut that was originally approved for theatrical release … and in many ways shows additional footage not included in the Peter Jackson cut.  Also, the U.S release date that I've seen published is February 8th ... and not the 28th ... so if Paul Cashmere is correct, you'll have an extra three weeks to hate it before Great Britain and Australia get their copies!  (kk)

From our FH Buddy Paul Evans …

Amazon is using my 1960 recording of “Happy Go Lucky Me”  on an advertisement for Amazon Photo.

And just what is my book, Happy Go Lucky Me – a Lifetime of Music, about?

The Stories Behind My Early Hit Records: From my recordings of “Seven Little Girls Sitting in the Back Seat” and “Happy Go Lucky Me” to my songs, “When” by the Kalin Twins, “Roses Are Red” by Bobby Vinton and four by Elvis. How we early “teen-age sensations” loved the glamour of having a hit record. But wait! Weren’t we supposed to be paid? How we were all taken advantage of.

The Jingle industry: The very talented and successful jingle singers. The super stars. From jingles to hit records and vice versa. Some way out decisions made at the advertising agencies. The whole world seems to know the word “residuals.”

The Opportunities and Challenges That Music Offered: I learned how to produce and arrange musical sessions and I toured as a member of a jazz quintet, Group 5ive. I wrote the original theme for the CBS This Morning show and spent time as a ship singer aboard the beautiful S.S. France. I wrote an off-Broadway show and finally broke into the UK’s Top Ten with “Hello. This Is Joannie” – 20 years after my early American hit records were “stolen” by British recording artists.

There you have it. 60 years filled with music and a book to top it off. Not a bad way to spend a lifetime.

HI TO MY FRIENDS AND FANS,

It's official: My new album, SOMETHING WORSE THAN LONELINESS, is due out on February 25th.

As most of you know, this will be my third album of new music over the last ten years. As with the last two (FINDING YOU AGAIN and MAGELLAN WAS WRONG), this one will be coming out on ACE Big Beat Records. And once again, the incredible Jamie Hoover is producing.

The liner notes are provided by the venerable Jeff Tamarkin, arguably the most highly respected music journalist in America.

I can tell you that IMO, this one is my best yet.

Here's one of the songs: https://youtu.be/mOeit0Dlh-w

I'm sending this email to let you know you can reserve your copy in advance by clicking this link:  https://acerecords.co.uk/something-worse-than-loneliness

Status Quo were not a one hit wonder in Kansas!  Besides the excellent "Pictures of Matchstick Men" and "Ice in the Sun," our great KEYN-FM in Wichita played both "Down the Dustpipe" and a fave of mine today still, "In My Chair."  I looked for a survey with the latter on it but could not find one.  I am sure it reached #15 or so.  Personally, from their later 70's recordings, I love their redo of Hank Thompson's "Wild Side of Life" as well!  ALL sit in my fave 45s boxes today!

Your statement “satisfaction guaranteed” brings to mind a line from the Atlanta Rhythm Section’s sublimely mystical 1978 hit “Imaginary Lover.” Now I want to play that. I’m gonna enjoy it.

Every once in a while I get bold enough to offer that “Triple Your Money Back” Guarantee!  Lol  (kk)

Did you know that Harvey Kubernik is going to be the guest on Coast to Coast next Thursday, January 13th ? He is scheduled to be on during the second half of the show, which runs from midnight to 4 am CST.

UPDATE:  I see that Harvey’s and Kenneth’s new Jimi Hendrix book DID make The Top Five for the year according to Loud Magazine …

Look for a brand new 1972 Survey tomorrow in Forgotten Hits ...

And then lots more survey and countdown related comments in next week's TUESDAY THIS AND THAT column.  (kk)