Yesterday we ran a list of live concerts happening in our area in August.

October 16th The Zombies perform at Star Plaza.  Four of the original Zombies reunited to present a hits-filled show along with a complete performance of their album classic "Odessey And Oracle".

The Arcada Theatre presents The Temptations Review with Dennis Edwards on September 4th, Three Faces of Elvis on September 5th, Belinda Carlisle (formerly of The Go Gos) on September 9th, The Stylistics on September 11th (we're not missing that one!), Kashmir, the premier Led Zeppelin tribute band, on September 12th, our FH Buddy Burton Cummings on September 18th (his third year in a row at this venue and ALWAYS "the show to see"!), Poco and Firefall, a GREAT double bill on September 25th, J.T. Taylor, former lead singer of Kool and the Gang on September 26th, country music superstar Ronnie Milsap on September 27th, Sam Moore (of Sam and Dave) on October 3rd, Neil Sedaka on October 4th, the legendary Buddy Guy on October 8th, The Liverpool Legends, performing a special birthday salute on what would have been John Lennon's 75th birthday on October 9th, Los Lonely Boys on October 10th, Leon Russell on October 16th, The Time Jumpers featuring Vince Gill on October 17th, Kansas on October 23rd, Mickey Gilley on October 25th and Blood, Sweat and Tears, featuring American Idol Runner-Up Bo Bice on lead vocals, on October 30th.

More great shows continue through the end of the year including Tanya Tucker, Sheena Easton, The Bronx Wanderers, Vicki Lawrence, Johnny Rivers, Christopher Cross and America along with special Christmas concerts starring Michael McDonald, The Lettermen, Felix Cavaliere's Rascals and The Ides Of March.  (No wonder The Arcada is now the #1 Music Venue in the Midwest!!!)  More details and ticket information can be found on The Arcada's website:  www.oshows.com.  (Proprietor Ron Onesti is already booking more headlining acts for next year including Paul Anka and a double bill featuring Tommy Roe and Chris Montez.  More 2016 dates to be announced shortly.)

Can you believe The Village of Bolingbrook STILL can't announce The Happy Together Show appearing there this Sunday, August 16th, at 7 pm???  It's a contractual thing, due to their show the following Friday Night at The Paramount Theatre in Aurora.  As such, Bolingbrook is billing this as "The Concert To End All Concerts" and, in that respect, they're absolutely right.  The Turtles, The Association, The Buckinghams, The Cowsills, The Grass Roots and Mark Lindsay, former lead singer of Paul Revere and the Raiders, will all take the stage in what can only be described as a '60's Music Extravaganza!!!  And Chicago is blessed to have TWO chances to see all of these great acts.  The Paramount will also be presenting Peter Cetera, formerly of Chicago, on September 4th, Jay Leno on October 30th, Peter and Paul on November 8th.  Still waiting for the official word on the make-up dates for Donny and Marie.  Their previously scheduled concert had to be cancelled due to Donny Osmond's vocal cord surgery.

Kent ...
I know that they're on the "Happy Together Tour" now.
Here they are on the Mike Douglas Show.
Frank B.
https://www.youtube.com/watch?v=JktRp8uQciI

The Rialto Square Theatre in Joliet also hosts Hippiefeat on October 3rd, Lyle Lovett and John Haitt on October 15th, Pure Prairie League with Firefall on November 7th and Tommy James and the Shondells with Gary Puckett and the Union Gap on November 13th.


Matthew and Gunnar Nelson return to Chicago for their "Tribute to Ricky Nelson" on Sunday, August 30th, this time stopping at The City Winery.  Justin Hayward does two shows at this venue on September 6th and September 8th, Dr. John comes by on September 9th and 11th, Lucinda Williams on September 23rd and 24th, Big Bad Voodoo Daddy on September 27th, Herb Alpert with Lani Hall on October 1st and Aaron Neville October 12th and 13th.

re:  This And That:
Antenna TV is bringing back The Tonight Show starring Johnny Carson ...
Beginning January 1st, the cable network will begin airing COMPLETE programs of the series that ran on NBC during Carson's reign.
As we all know, Carson RULED late night TV back in the day ... and these aren't just "clip fests" of "The Best of Carson" ... these are complete 60 and 90 minute episodes that will air "intact", exactly as they were broadcast the first time around.
Antenna TV has licensed HUNDREDS of hours of programs through The Carson Entertainment Group that ran between 1972 and 1992, the year that Johnny retired.  (Because NBC owns the rights to the name "The Tonight Show", Antenna TV will run these as simply "Johnny Carson" ... what?!?!  Not "Here's Johnny!"?!?!)  They'll even air these programs against today's current late night competition beginning at 11 pm eastern time, with one hour programs running Monday thru Friday and 90 minute versions on weekends.
Variety is reporting that the scheduling of episodes will be carefully curated to run as themed weeks or months, as well as episodes that coincide with notable anniversaries, holidays and other milestones. Those could include everything from a week’s worth of “Tonight Show” debuts by future comedy superstars such as Jerry Seinfeld, Jay Leno, Ellen DeGeneres, Richard Pryor, David Letterman, Jim Carrey and Tim Allen to a month of Christmas episodes in December. Antenna’s “Tonight Show” run will begin with the New Year’s Day episode from 1982 featuring Eddie Murphy and “MASH” star McLean Stevenson.  (kk)

Columbia House filed for bankruptcy this week.  I guess the digital age finally did them in.  Is there ANYBODY out there who wasn't a member at some point of their lives?!?!  How big were they?  I remember the running joke going around in the late '70's and early '80's about people being denied mortgages because they hadn't fulfilled their Columbia House obligation to buy that 9th album yet!!!  The end of an era for sure.  This is yet another major blow to my youth ... turns out I can't use my S&H Green Stamps anymore either!!!  (kk)

Speaking of stamps, the brand new Elvis Presley stamp came out this week ... haven't had time to get to the post office yet, but a couple of our readers chimed in on this one ...

re:  Smile:
>>>Carl Giammarese tells us that in addition to these two major area shows, he'll be back in Chicago to sing The National Anthem at Wrigley Field on September 19th.
>>>Hopefully the Cubs will be in the playoffs by then.  (Carl)
>>>Cubs ... playoffs?!?!  Now those are two words you don't often find in the same sentence!!!  (kk)
"Back to the Future" predicted it would happen in 2015. Yeah yeah I know ... Florida is in the wrong league for us to play them in the World Series ... but stranger things have happened!
I haven't made any concerts this summer, but I still read Forgotten Hits.
Just yesterday I did a follow-up MRI and they want to take some more images.  They saw something that did look good.
Here's a picture of the Imaging Technician ... I wish!   I couldn't see her in the tube. As Dan Hartman would say "I Can Dream About You".
Bill Hengels 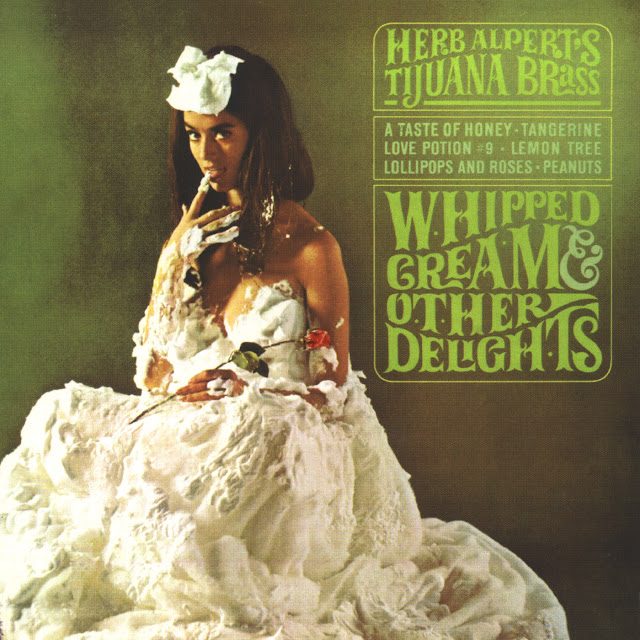 Glad to see you haven't lost your sense of humor!  Best of luck to you, Bill!  (kk)

Kent,
If you can, check out today's (August 11) comic strip of DENNIS THE MENACE. It somewhat reminded me of FH in the music of yesterday and the music being played today, of which I am not familiar.'
Larry 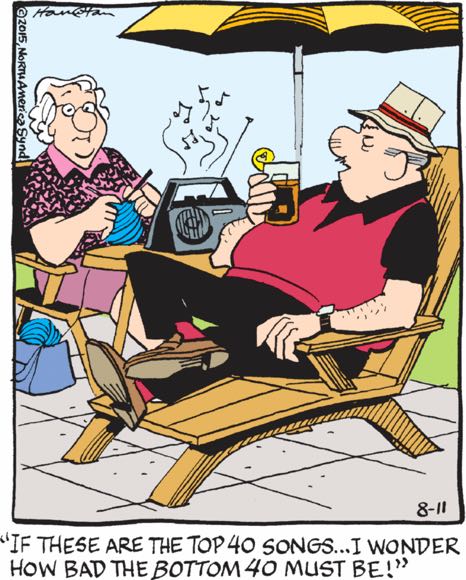 Man, it seems like the daily comics are infringing on MY turf lately!!!  Larry also sent us this Blondie clip a few weeks ago ...

From Gary Pike, formerly of The Lettermen ...

The White House, one year after Donald Trump is elected president ... 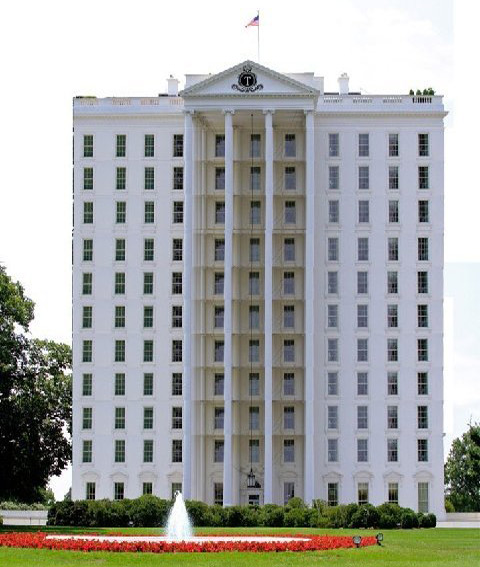