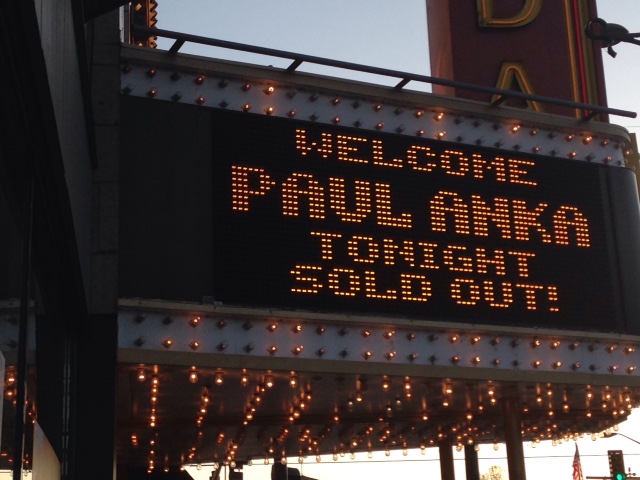 And landed center stage at The Arcada Theatre.

Paul Anka blew the doors off with a kick-ass two-hour performance to a full house of enthusiastic fans ... and I don't think I've ever a crowd so appreciative. 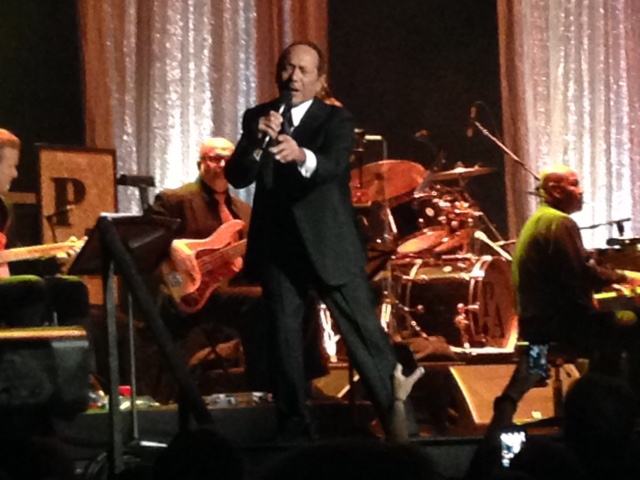 It was an all "pro show" from start to finish ... and our VERY sharply dressed host and Arcada CEO / President Ron Onesti was beaming throughout the entire evening.

Prior to Anka taking the stage Ron told the audience that booking Paul had been on his bucket list for nearly thirty years ... well, Ron, it was well worth the wait ... Anka is the consummate showman who has the art-form down to a science.

Paul told the crowd that this month marks his 59th year anniversary performing in show business.  Man, what a career this man has had.  (I couldn't help but think about how many times a week I'll hear a coworker, vendor or customer, beat up by the daily grind, say, when asked how they're doing, answer "oh, you know, livin' the dream" ... but Paul Anka truly IS living the dream ... and he's being doing so for going on sixty years now!) 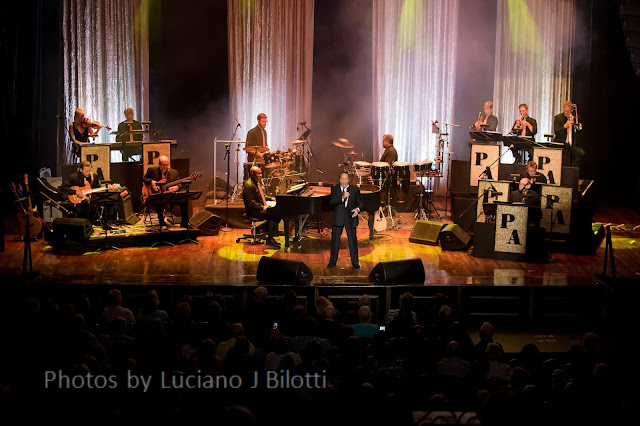 Even his entrance was spectacular.  While a prerecorded overture played, his 12-piece band / orchestra slowly took the stage and then, once all members were seated and began playing on their own, we heard the booming, crystal clear voice of Paul Anka off stage begin singing "You Are My Destiny".

As he finished the first verse, the whole audience was up on their feet, waiting for him to come out from behind the curtain backstage, only to find out that Anka had entered from the back of the theater.  As the spotlight hit him, the crowd went crazy with applause.  The look of pure joy and excitement on all the faces only made each audience member smile wider as Paul worked his way down the aisle through the crowd, shaking hands and slapping high-fives with audience members along the way.  Anka is a superstar legend, both as a performer and a songwriter, who has enjoyed a stellar career.

His voice is probably stronger and more powerful than ever ... yet he still retains every bit of the youthfulness we came to love over the years buying his records. 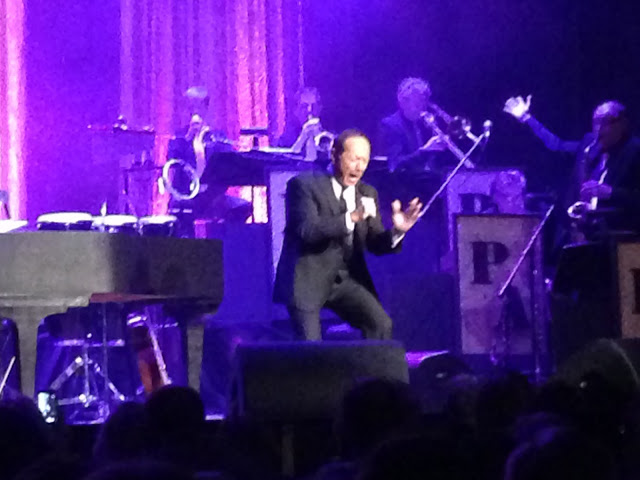 Throughout the night a series of vintage videos were run on the big screen ... Anka on The Ed Sullivan Show, Anka with Dick Clark, interview clips and publicity stills of Paul with everybody from Frank Sinatra to The Beatles to Annette Funicello to Muhammad Ali to Michael Jackson.  A video clip of Sammy Davis, Jr. performing one of Paul's tracks was especially moving.  (Anka was an "honorary member" of "The Rat Pack" and hung out regularly with Davis, Dean Martin and ring leader Frank Sinatra, who dubbed him "The Kid", and finally coaxed him into writing what would go on to become one of the biggest hits of both of their careers.)

The tracks he chose to perform for this show were incredible ... a full career retrospective ... including a number of "Forgotten Hits" that the die-hard fans in the audience really loved hearing again.  (MAJOR hits that radio has forgotten all about like "Let The Bells Keep Ringing", "All Of A Sudden My Heart Sings", "My Home Town","Tonight, My Love, Tonight", "A Steel Guitar And A Glass Of Wine", "Hold Me 'Til The Morning Comes" and "The Times Of Your Life", during which time he encouraged the crowd to "take as many pictures as you like" ... absolutely fitting, of course, since that song was used in a Kodak ad campaign for years.)

Speaking of taking pictures, the audience got another treat when Paul came out into the seats to sings some of his biggest early hits, posing for pictures with audience members during "Lonely Boy" and "Puppy Love" and slow-dancing while crooning "Put Your Head On My Shoulder" into the ear of a female fan up front.  (He even sang into one man's cell phone, later joking that it wasn't fair that the person on the other end of the line was hearing the show for free!) 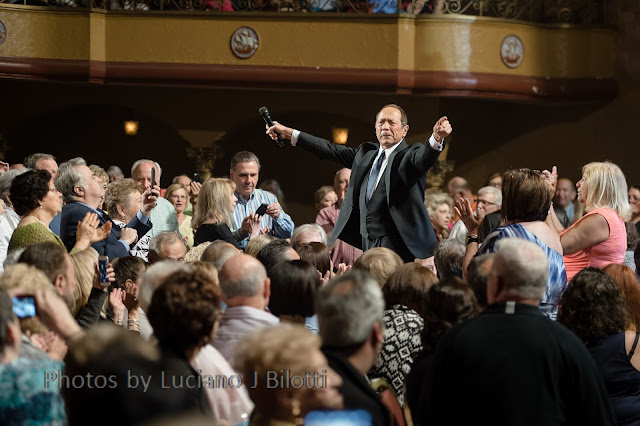 He also honored a couple of requests from the crowd ... (although it was pretty obvious that these were not quite as "ad-libbed and spontaneous" as they were made out to be) and did one of my personal favorites, "Do I Love You" from 1971, although it was barely recognizable as he had slowed down the original tempo drastically.  It all became clear as to why, however, when he segued into Prince's "Purple Rain", which he belted out like a bonafide rocker!

Another highlight was a brief "unplugged" segment where Anka performed the song he wrote for Buddy Holly, "It Doesn't Matter Anymore", backed by an incredible accompaniment of acoustic guitars, violin / fiddle and harmonica, which he then turned into a medley of other great hits from this early era including "Oh, Lonesome Me" and "Bye Bye Love".  It was an absolute stand-out performance (in a fun, pickin' and grinnin' sort of way!)

In between we heard some GREAT stories about the people whose paths he crossed along the way ... a stirring tribute to the military, tied into a tale about his role in the film "The Longest Day", for which he also wrote (and performed) the title track ... lots of corny jokes and Vegas glitz ... like I said, he's got this whole show business thing down to a science ... but the audience totally ate it up ... this was a class act all the way. (Truthfully, some of the "spoken word" style of singing for dramatic effect wore a little thin for me at times ... and I personally could have done with about fifty less "strike a pose" / "ain't I great" moments but hey, Paul Anka's proud of all he's done and accomplished ... and he should be ... he's had one hell of a career and based on what we saw Thursday Night, it's still going strong.) 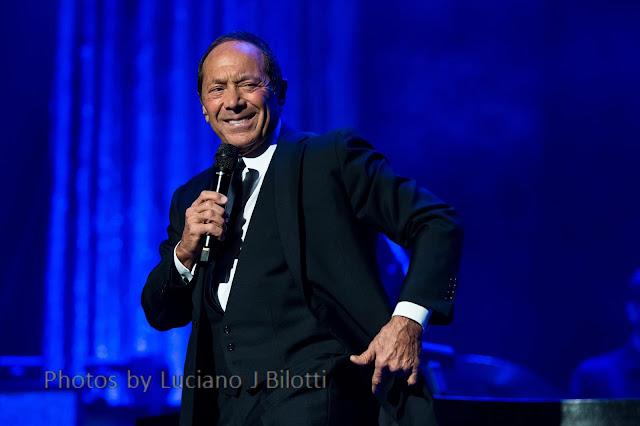 When he did his big #1 hit "Havin' My Baby", the female vocal lines were covered by his very talented violinist (who REALLY cooked on the aforementioned "It Doesn't Matter Anymore" and played beautifully throughout the night.)  I enjoyed this "duet" comeback phase of his career and would have loved hearing a few others like "I Believe There's Nothing Stronger Than Our Love" and "I Don't Like To Sleep Alone", tracks he originally cut with Odia Coates.  Likewise, I would have welcomed hearing his version of "Love Never Felt So Good", the GREAT posthumous track released last year by Michael Jackson and Justin Timberlake.  (Sadly these hits were missing from the line-up Thursday night.)

Naturally things closed up with "My Way", the monster, defining track he wrote for Frank Sinatra and "Diana", his breakthrough hit.  It was two hours of pure showmanship. 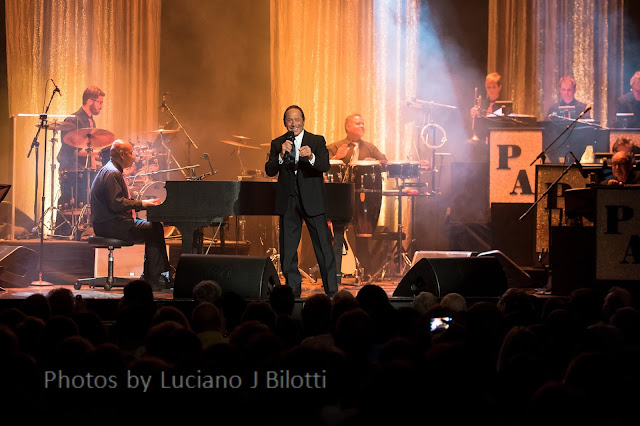 (very special thanks to Luciano Bilotti for all these great shots!
uncredited shots by Frannie Kotal)


After performing at The Hard Rock Rocksino in Northfield, Ohio, last night, Anka takes a short hiatus ... but then returns to the road for half a dozen concert dates in July ...

And check out all of the five-star reviews posted on the Ticketmaster website
http://reviews.ticketmaster.com/7171/734443/paul-anka-reviews/reviews.htm