Dear kk -
The Paul Anka show was incredible. At 75, his voice was magnificent. I didn't detect even one questionable note. What a special ensemble of talent supporting him!
The stories were interesting, the jokes, albeit lame, were cute, and his timing was perfect. And after performing for 59 years, his enthusiasm and respect for his audience was off the chart.
Unlike so many of his contemporaries all of his songs were performed pretty much using the original arrangements so you never heard anything " jazzed " up and questioning what you just heard. I enjoyed the two hour effort and felt I heard EVERYTHING I was hoping to hear.
My daughter was with me ... she's 46 and was mesmerized by the event.
Highlites for me personally --
His entrance - he entered right by my seat - very cool.
The duet with Sammy was special.
Being a vet and also a fan of the movie, the dramatic rendition of The Longest Day brought me to tears. Him doing the presumably unrehearsed requests was neat.
The way he descended into the audience to perform and his amusing interaction was pulled off perfectly.  I thought he brought the full house to their peak of excitement. What fun!
Finally the segue from My Way to Diana was as good a finale as any I could have wished for.
I was not prepared to experience what turned out to be one of the finest concerts I've witnessed. Took me 59 years to get to see him perform but as the cliché goes " Well worth the wait ".
I nearly forgot ... how well done was the guitar ensemble medley and of course, me being familiar with the history of "I Guess It Doesn't Matter Anymore" made it more personal.
My ONLY regret from the evening is not having the opportunity to say hello to you. Perhaps some other time.
Continued success to you ... looking forward to read your remarks.
God Bless,
Jim Nowoc

Hi  Kent,
I've got a question for Bobby Rydell ...
What were your first impressions of Ann Margret when you worked with her and are you still friends??
(Can you tell I am a big Ann Margret fan!!)
Keep up the GREAT work Kent!
Carolyn
Bobby and Ann have kept in touch over the years and still see each other from time to time ... but probably not as often as either would like. (In fact, they still call each other "Kim" and "Hugo" most of the time!!! lol)
He talks quite a bit about working together on "Bye Bye Birdie" ... as well as some special "reunions" since.  (The name of the high school in the musical "Grease" was "Rydell High" ... another great tribute to this early teen idol!)  I know that "Bye Bye Birdie" and "Grease" are two of my daughters' all-time favorite musicals ... and we've seen them numerous times over the years.
Don't forget to send us YOUR questions for Bobby Rydell ... We'll be talking with him next week ... so, if there's anything you've ever wanted to know, drop us a line and we'll include the best questions as part of our interview! And, enter now to win a free copy of Bobby's new book, "Teen Idol On The Rocks".
Just drop us a line and put "BOBBY BOOK" in the subject line ... and we'll enter your name in our drawing to win a copy of this new biography!  (kk)

I just had a great read, and fully enjoyed The Bobby Darin Story link.
I also just finished reading Tommy James' "Me, the Mob, and the Music" and found it very good reading.
And, I just ordered the book "Bobby Darin: The Incredible Story of an Amazing Life".  I am sure I will enjoy it, especially after reading the link from your great site.
I wish Omaha wasn't so far from the Arcada Theatre ... I would love to be able to see some of the great entertainment that seems to always be there.
I do have tickets to see The Happy Together tour that is coming on September 3rd. I know it will be a great time.
norio
The Arcada puts on some amazing shows ... in the course of a week you can see big name Vegas acts like Paul Anka and Marilyn McCoo and Billy Davis, Jr. ... country star Crystal Gayle ... rocker Sebastian Bach ... psychedelic groups like The Strawbs ... the inventive Todd Rundgren ... and classic rockers like The Orchestra followed by The Glenn Miller Orchestra!  ALWAYS something interesting going on, with the widest variety of musical styles you're ever going to find.
The Tommy James book is being made into a movie (I'll have to ask Tommy how things are coming along with that) and, after doing all my research for the Bobby Darin article, I have become a full-fledged fan.
The Happy Together Tour line-up this year consists of The Turtles, Chuck Negron, Gary Puckett, Mark Lindsay, The Cowsills and The Spencer Davis Group.  As of right now, there's no Chicago stop listed ... but they ALWAYS come to The Paramount Theatre so I'm hoping they follow suit.  This is a GREAT line-up and you should have a great time.  (kk)

Speaking of The Happy Together Tour, Mark Volman has been declared "cancer free" ... I recently got this note from FH Reader Tom Cuddy ...

Mark Volman, the frizzy-haired co-frontman of the Turtles and the “Flo” half of Flo & Eddie, has been given a clean bill of health after undergoing treatment for throat cancer.
The news was broken on Twitter by the band’s other frontman, Howard Kaylan, who wrote, “Thanks for all of your positive thoughts. Here to tell the world, Mark (Flo) Volman is Cancer Free!! 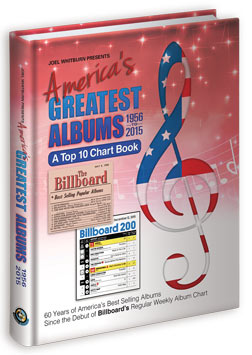 It is the PERFECT companion piece to his recent America's Greatest Hits compilation, listing The Top Ten Records on The Billboard Pop Singles Chart for EVERY week from 1940 thru 2015.
You can order your copy now thru the Record Research website ...
https://www.recordresearch.com/billboard_chart_collections/americas_greatest_albums_1956-2015.php
Or enter to WIN a copy now by dropping us an email with the words TOP TEN ALBUMS in the subject line.
We'll pick one lucky winner over Memorial Day Weekend and send them a copy of this hot new book ...
So get your entries in NOW to qualify!  (kk)

Jim Peterik has a few more local shows set up to promote his new album "The Songs" ... featuring brand new arrangements of some of his most popular and best-known tracks.
We missed his show at The City Winery a couple of weeks ago ... had to work late again at the last minute ... but we're shooting to catch him on Saturday, June 25th, at the Rau Center For Performing Arts in Crystal Lake.  (He also has shows coming up at The Acorn Theater in Three Oaks, MI, on June 4th and another one on July 17th at The Space in Evanston.  Check the jimpeterik.com website for more details.)  kk

Jim's also has some Ides shows coming up ... in fact, the group also recently visited their altamater (and mine as well), Morton West High School.  (see photo below) 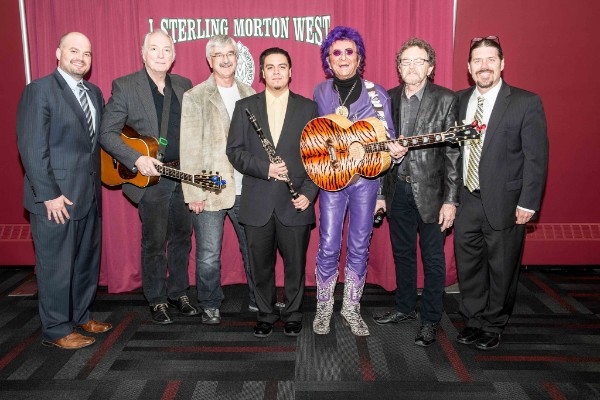 Catch The Ides Of March June 24th at The Pantages Theatre in Minneapolis, MN; July 3rd at Ribest in Naperville, IL; July 9th at Summerfest in Milwaukee, WI; July 16th at The Brookfield Zoo in Brookfield, IL, August 6th at Romeofest in Romeoville, IL; The Arcada Theatre on September 3rd in St. Charles, IL (part of the Cornerstones of Rock show) and The Theatre of Western Springs on November 5th in Western Springs, IL.
More dates are being added all the time so be sure to check The Ides Of March website for all the latest information.
http://theidesofmarch.com/shows/

Regarding "Never Be Lonely" by The New Colony Six ... last month when I saw Bob Wilson - the writer of this song - we discussed it fondly. He and Ronnie Rice talk quite often, and it would be so cool to get Ron down here to perform it with Bob and his band.
David Lewis
The story goes that Bob Wilson brought the song with him when he joined The New Colony Six after leaving The Boyz.  (However, further research says that Wilson was never officially a member of The NC6 ... he just supplied them with material, including another "bubbling under" hit "People And Me".)  I'd be curious to get HIS take on all of this since we've never spoken to him about it.  (Maybe you can speak with him, David, and have him get back to us???)  Meanwhile, here is a copy of the very rare Boyz version of this tune.


If a Mike Nesmith guest appearance at an upcoming Monkees show means that we will get to hear "Me And Magdalena" live, please tell Mike to just keep writing his book, which also sounds like it's gonna be a real winner ... NOT!
Dave The Rave
I thought Mike's participation on the new album was going to be vintage tracks that have been in the can for four or five decades ... but believe it or not, this is a brand new track, written by Ben Gibbard of Death Cab For Cutie, who says ...

Before The Beatles, before The Velvet Underground and before punk and / or indie rock, The Monkees were the first band I truly loved. Their albums were always on in our home when I was a kid (especially Pisces, Aquarius, Capricorn & Jones Ltd.), and I learned to sing alongside them. I spent countless hours in front of the TV in the '80s watching Monkees reruns wishing I could climb through the screen and be in the show with them. They made being in a band seem so fun — and goddammit, it should be! For these reasons and a million others, I can say with absolutely zero hyperbole that contributing "Me & Magdalena" to this album has been the greatest honor of my career.
-- Ben Gibbard

Hi Kent,
Regarding Image Of A Girl ...
Bobby Rey of the Hollywood Argyles told me that he produced that and he was the one playing the "ticking clock" sound that Larry Neal refers to in his email.
I dated a girl who's 1st husband was a later member of the Safaris (not on the record).
I saw Safaris lead Jimmy Stephen on a SoCal Doowop Soc show circa early 90s.
Gary E. Myers / MusicGem
Posted by Kent Kotal at 5:30 AM