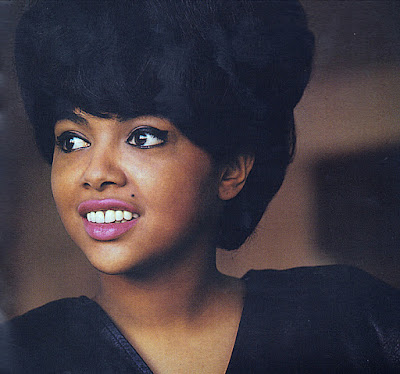 Tammi had collapsed in Marvin’s arms while performing onstage in 1967.  It was later discovered that she was suffering from a brain tumor.

It was one of the most traumatic moments in Marvin's life (short of being shot and killed by his own father, I imagine!) and he often said that he never got over it.  He later implied that this grief may have contributed to his own drug use.

Gaye would be paired with other female duet partners (Kim Weston, Mary Wells and Diana Ross all come to mind) but he and Tammi had the magic.

Born Thomasina Montgomery in Philadelphia, she lived a very hard life in her 24 years.  (She died just one month prior to what would have been her 25th birthday.)  She was renamed Tammi Terrell by Berry Gordy when he signed her to record for Motown.

According to Wikipedia, Tammi got involved with James Brown, The Godfather of Soul, while she was  singing in his back-up group at the tender age of 17 in 1962.  It became a sexually abusive relationship and one night in 1963, she left him while out on the road after Brown reportedly assaulted her for not watching his entire performance.  Former Famous Flame Bobby Bennett says that he witnessed the incident.

"He beat Tammi Terrell terrible.  She was bleeding, shedding blood.  Tammi left him because she didn't want her butt whipped anymore."


A few years later, while touring as part of Motown's Motortown Revue in 1966, Terrell got involved with David Ruffin of The Temptations.  Terrell accepted Ruffin's marriage proposal but then, after announcing their engagement onstage during an appearance together, she discovered that he was already married!  Wikipedia says that Ruffin had a wife, three children and another girlfriend in Detroit!  "This revelation and Ruffin's drug addiction led to violet arguments."  Tammi told "Ebony Magazine" in 1969 that she believed her emotional state during this relationship was "a contributing factor to her headaches, which would come after quarrels."  She ended the relationship in 1967 after Ruffin hit her in the head with his motorcycle helmet.

Tammi would undergo eight brain surgeries before going into a coma in January of 1970.  When she died, she was suffering from hair loss and blindness and was down to just 93 pounds.

She fought her illness and a lifetime of migraine headaches because she just wanted to perform.  (Early on, she also sang back-up for Jerry Butler, which is how Berry Gordy first discovered her.)  She was a VERY brave young girl who loved and lived to sing.  Bad luck just followed her throughout  her entire career.  If ever a biopic needed to be made, THIS would be the artist who deserves such an honor.  (kk)