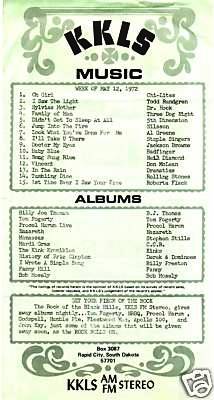 This week's stop ... Rapid City, South Dakota ... where we see a rather short chart of only The Top 15 songs ... as well as 11 albums, which apparently aren't ranked as none of these were really top-charting LPs.  (I can only assume they played selections from each judging by the hard to read "Get Your Piece Of The Rock" box at the bottom of the survey.  It almost appears as if the station may have been transitioning into a more album-rock format ... especially since they had both an AM and FM affiliate.)
No real surprises on the singles side ... other than, perhaps, seeing "Jump Into The Fire" by Nilsson sitting at #6.  (Due to a lack of better choices, we'll just go with that one this week!)
Posted by Kent Kotal at 6:00 AM