Chicago - Live In Concert At Ravinia

Birthday #58 will be one to long remember ... as we spent it at the big homecoming concert Chicago
performed at the Ravinia Festival Saturday Night ... complete with dinner, backstage passes and excellent seats to the show ... all courtesy of our FH Buddy Tom Cuddy and Chicago's Manager Peter Schivarelli. (Thanks, guys ... it really was a GREAT show --- GREAT night --- and a GREAT time!)


I should start out by saying that the very first concert I ever attended at Ravinia was Chicago ... way back in 1971.  (Incredible to think that this was 40 years ago ... since that night, Chicago has become a mainstay on the pop charts and radio, placing a remarkable 50 hits on Billboard's Hot 100 Singles Chart!)


Ravinia has come a long way since 1971, too ... back then we did the picnic-thing, camped out under a tree (that had a speaker mounted to it that was smaller than the speakers I had at home at the time connected to my stereo!) and listened to the very muddled sounds of a band that was just first making their way up the charts.


Today, Ravinia is a BEAUTIFUL place to see a concert ... with high-tech speakers and sound and jumbo screens ... people don't just pack a picnic basket anymore ... they cart along their entire dining room sets!!! ... and this evening was sold out to the max!  (In fact, Chicago played both Saturday and Sunday Nights to a sold-out crowd of VERY enthusiastic, loyal fans, eager to welcome our local heroes back home.)

They performed a two-hour set of nothing but the hits ... including several of our favorites that unfortunately seem to fall into the Forgotten Hits category when it comes to radio these days:  "Dialogue", "Alive Again"; "Along Comes A Woman" (which stuck in my head for the next 48 hours!) and one of my favorite LP tracks, "Wake Up Sunshine". 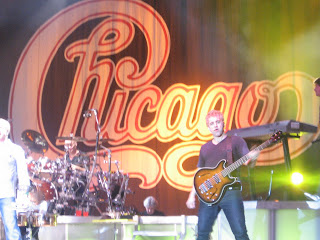 These favorites were mixed amongst some of the biggest hits of the past three decades.
The show opened with the entire suite "Ballet For A Girl In Buchannon" (featuring "Make Me Smile" and "Colour My World"), and along the way concert attendees were treated to nothing short of a hit after hit after hit assault of some of the biggest music of our lifetimes ... complete performances of "Free" and "25 Or 6 To 4" (the encore finale); "Beginnings", "Does Anybody Really Know What Time It Is" and "I'm A Man" (all from the very first "Chicago Transit Authority" album); "Just You 'n' Me"; "Searchin' So Long"; "Call On Me"; "Old Days"; "If You Leave Me Now" (performed with their opening act, Isabela Nanni, a 14-year-old High School Freshman who wowed the crowd with her brief performance, on lead vocal); a GREAT (and VERY moving) rendition of "Baby What A Big Surprise"; "Hard Habit To Break"; "You're The Inspiration" and an up-on-your-feet, show-stopping barrage of "Saturday In The Park", "Hard To Say I'm Sorry" / "Getaway" and "Feelin' Stronger Every Day" to close the show.


40+ years later, Chicago still has four original members on board ... Robert Lamm, Jimmy Pankow and Lee Loughnane ... see photos below... as well as Walt Parazaider, who sat out this special homecoming performance, allowing Ray Herrmann to fill in the rest of the horn section ... but many of the "substitutes" have been with the band for upwards of 10 - 20 years now ... and I have to say that they have ALWAYS had a knack for being able to recreate the sound of their records in a live environment that may be second only to The Eagles ... and this despite ANY and ALL of the personnel changes that may have occurred along the way. 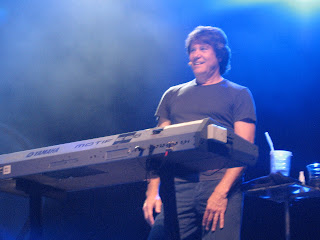 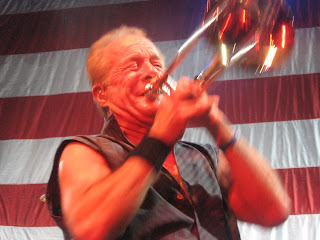 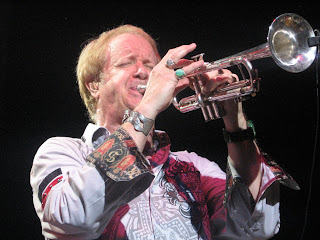 With that being said, a quick personal note from me to Jason Scheff (who for 26 years now has assumed the role originated by Peter Cetera on bass guitar and lead vocals ... to the point that we can't even tell the difference anymore ... in fact, Jason brings SO much energy into each performance that we dubbed him after the show "the performing artist MOST in need of a wardrobe change during a concert" ... this poor guy was soaking wet after the third song!!!):


Jason ... way back in 1989, you guys did a show at Poplar Creek in tandem with The Beach Boys.  I took my daughter Nicki ... then four years old ... to see that show ... we had second row seats, front and center ... and during your performance of "You're The Inspiration" that night, you singled her out and sang that song directly to her, pointing to her each and every time you sang the lyric "you're the inspiration".  I'm sure that this move has been a part of your stage show all along ... and you've probably done the same thing thousands and thousands of times since ... but I just HAVE to tell you that for that one special night, you made my daughter feel like the most important person in the world ... and I thank you for that.  She's now 26 years old ... and getting married next April ... but I know that this will ALWAYS be one of her most cherished memories ... (especially since she came to see The Beach Boys that night and not Chicago!!!  lol)


Anyway, I wanted to thank you personally backstage after the show but, as you know, it was crazy-city back there ... so I'm publicly doing it now to let you know just how much it meant to BOTH of us that night.  Thanks again! 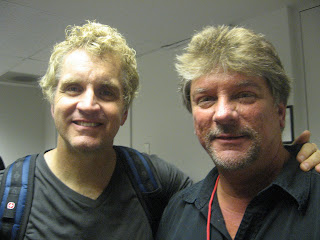 Jason and me ... backstage after the concert

And the band isn't simply resting on its laurels either ... Chicago has just recorded a brand new Christmas album (their THIRD release of holiday music, appropriately titled "O Christmas Three", which will be available on October 4th) ... and it looks like Forgotten Hits may be one of the first sources to "sneak peek" a track ... so please stay tuned for that!  During the concert, they rolled out a lit Christmas tree and performed their rollicking, jumping version of "Rockin' Around The Christmas Tree" to the complete delight of all the fans in the audience. 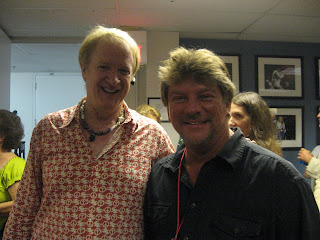 Me and Lee ... talking about the new Christmas CD after the show

And here's a little promo link for the new Christmas album:
http://www.youtube.com/chicagotheband1#p/a/u/1/dSlAfo1_Blg

Chicago is also one of those rare artists who encourage their fans to take pictures and record their show.  (You'll find some of Frannie's favorites sprinkled around the website today!)  Like Robert Lamm told the crowd Saturday night:  "Hey, they're all gonna end up on YouTube tomorrow anyway, right?"  (In fact, he encourages fans to submit pictures to the Chicago website, because they're happy to run some of the best ones there!) Check 'em out here:  Click here: Chicago Home Page
Meanwhile, let me just say that Chicago is, without question, one of the BEST live acts out there performing today.  They've been on tour non-stop for close to a year now and they've still got plenty of live dates set up between now and the end of the year ... check their tour calendar at the link above to see if they're coming to a city near you.  It's a show you won't want to miss.


And, on that happy note, let me ALSO say that I think that this may FINALLY be their year ... LONG near the top of our list of Deserving but Denied Artists worthy of Rock And Roll Hall Of Fame induction, my feeling is that Chicago may FINALLY get the nod they deserve when the new ballot is announced later this year. (It's an absolute crime that these guys aren't already in ... but better late than never ... so my hope is that The Rock And Roll Hall Of Fame Nominating Committee will FINALLY take the time to recognize these guys for the INCREDIBLE contribution they have made to the music scene for the past 45 years.)  Wake Up, Sunshine ... and give these guys the honor that they so rightfully deserve!
kk
Kent Kotal
Forgotten Hits 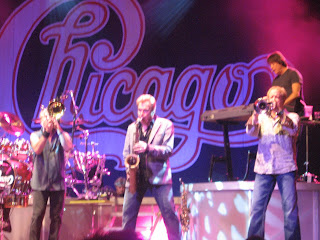