The Happy Together Again Tour: Our Concert Review

The Happy Together Again Tour made a second pass through the Chicagoland area this past weekend, this time stopping at The Paramount Theatre in Aurora, IL, where we were finally able to see the show and catch up with the guys.

The 2011 Tour has been a ROUSING success (and bookings are already being lined up for 2012!!!)  They played to a packed house Friday Night in Aurora ... and it was a VERY enthusiastic crowd ... clapping and singing along from start to finish ... and awarding the artists with standing ovation after standing ovation throughout the night.

Each act was in top form.  The Buckinghams kicked off the concert, running through all of their biggest hits ... "Don't You Care" ... "Mercy Mercy Mercy" ... "Hey Baby, They're Playing Our Song" ... "Susan" ... and their chart-topper "Kind Of A Drag".  The band sounded great and Carl Giammarese was in great voice handling the lead vocals on all of The Buckinghams' hits.  Bass Player Nick Fortuna even got a shot at the vocal spotlight when the band did a rousing version of "Expressway To Your Heart", which played to a great response from the crowd.


Next up came The Grass Roots, who started their show by paying tribute to recently deceased lead singer Rob Grill, who they acknowledged as "the voice of The Grass Roots for the past 45 years."  The guys put on a hit-filled set but honestly at least three of these songs dragged because the tempo was simply too slow.  They did garner a large round of applause when they saluted all of the Viet Nam Vets in the audience however, dedicating their big hit "Let's Live For Today" to all the guys who never got a proper heroes welcome when they returned home after fighting in America's most controversial war.
A lot of fuss has been made about the band (hand-picked by Grill, by the way, to carry on The Grass Roots' name) having NO original members or any real rights to calling themselves The Grass Roots anymore ... and, after seeing them, I have to agree that a more appropriate handle might be something like either "The New Grass Roots" ... or even something a bit more clever like "Golden Grass: A Tribute To The Grass Roots".  We'll cut them some slack this year because Rob was still with us when the tour commenced ... and I honestly believe that at least HALF the audience had absolutely NO idea whatsoever that what they were watching that night was nothing more than a fourth-generation assembly of a couple of guys who at one time backed up original singer Rob Grill ... but I really believe that from this point forward "truth in advertising" should kick in ... and, as good as the band is ... and important as it is to keep this great music alive ... settle in on something a bit more representative of who they really are.
The Association came next (with three original members intact). These guys, too, have come under quite a bit of scrutiny during the tour for having a difficult time recreating their perfect blend of harmonies in a live environment ... but I've got to say that, save a couple of cringe-inducing moments ... they sounded pretty darn good to me.  (FAR better than the last time I saw them a couple of years ago at an outdoor venue in Bensenville, Illinois.)  In fact, one of the concert highlights of the whole evening was their reading of their Top Ten Forgotten Hit "Everything That Touches You" ... it was absolutely beautiful ... and so was their GREAT interpretation of The Mamas and the Papas' big hit "California Dreamin'".  All in all, I felt that they put on a very strong set.


After a brief intermission, Mark Lindsay took the stage, looking and sounding as good as ever.  He ran through a brief set of Paul Revere and the Raiders' hits, bringing the house to its feet with "Indian Reservation", the best selling single in CBS / Columbia Records' history ... until (as Lindsay noted) Michael Jackson came along with "Billie Jean"!!!  Another concert highlight for me was Mark's performance of "Arizona", a spot-on version that sounded every bit as good as the record.  Throughout the tour we've been hearing that Mark's been stealing the show ... and honestly, I would have loved to see him do another 20 minutes of material as SO many of his hits weren't featured ... but his set just kept the pace of the show on track and he truly left the audience wanting more.  (Having seen both Paul Revere and the Raiders AND Mark Lindsay this past year, I have to say that I thoroughly enjoyed BOTH shows as each takes a completely different approach to the music.  Paul Revere puts on a hysterical, Vegas-style show with top notch musicians and stage showmanship while Mark Lindsay pretty much just sticks to the sound of the records and blows the audience away with how good his voice still sounds.  BOTH shows are well worth seeing ... and I promise you that you will not be disappointed by either!)  In fact, at age 69, Mark displayed an energy on stage that left ME exhausted just watching him from the audience!!!  GREAT show! 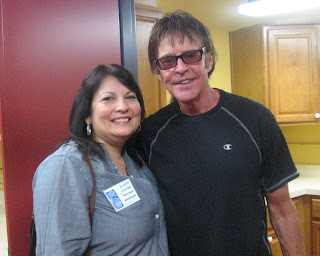 Frannie and Mark Lindsay, backstage after the concert
Finally, the headliners, The Turtles came out. As Howard Kaylan's guests to the concert, we have to say that he was the PERFECT host ... The Turtles were as entertaining as I've ever seen them and were in EXCELLENT voice throughout night.  Once again, they did a quick run-through of their biggest hits ... "She'd Rather Be With Me", "You Baby", "You Showed Me" (my favorite performance of theirs that evening), "Elenore" and "Happy Together" were all represented ... and the crowd absolutely LOVED them.  Mark Volman's clowning around never gets old ... and, after Howard explained that they were, in fact, The Turtles ... and then spelled the name of the band T-U-R-T-L-E-S, Mark quickly pointed out that they missed being The Beatles by just three letters ... and about a gazillion dollars.  About a ten minute sing-along version of "Happy Together" closed the show ... or so everyone thought. 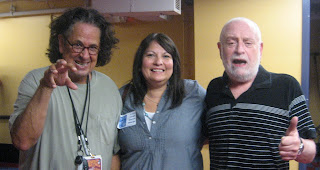 After announcing that they had had SO much fun tonight that they were going to start the show over, Howard then brought each act back out one by one, in order, to reprise one of their hits, filling the stage with SO much '60's talent at one time that it was nothing short of mind-blowing.  The combined talent of these artists have recorded a total of over 50 Top 40 Hits!!!  It made for the PERFECT finale to the show ... and I can honestly say that everyone looked like they were having a total blast doing it.


The show moved along at a brisk pace, thanks to a "shared" back up band that accompanied all of the artists.  (I can only imagine that this is what it must have been like to see one of those Dick Clark Caravan Of Stars shows back in the '60's ... where they had eight, ten or twelve big name acts on the bill and each came out to play three or four of their latest and greatest hits.)  The show played like a well-oiled machine and there wasn't a moment lost between acts.


I'll also say this ... for some of the readers who commented about too many "old age" jokes spread throughout the night, this wasn't our experience at all.  Sure, there were a few ... but watching this show on my birthday weekend (and, as such, very conscious of my own age at that particular moment in time), I never once felt in ANY way insulted or pandered to.  (Mark Volman joking about The Turtles being big rock stars with chicks waiting back for them at the hotel got as big a laugh as any that night!)
Sadly, by the time you read this, the 2011 tour will be over ... so if you missed it, you missed an evening of wall-to-wall entertainment by some of the biggest acts of our generation.  (After the show we saw Friday night, there were only three dates left to see this year's tour ... everything wrapped up at the Minnesota State Fair on Monday, the 29th).  Dates for the 2012 Tour are already being booked (and Howard told me that they're hoping to add some more cities, particularly on the west coast, to next year's romp ... which I know is something that many of our readers were hoping for.)  Howard also said that this is the most fun he's had doing this show in years, thanks to a stellar back-up band, an extremely strong line-up, and a devoted legion of fans who turned out every night to show their love and appreciation for this music.    Nothing firm on the 2012 line-up yet (although there may be some surprises) ... but you know you can count on Forgotten Hits to bring you this information as soon as it's available.
Thanks again to Howard for inviting us to the show ... and to all the guys for another great summer of musical entertainment.  The Happy Together Tour played to sold out audiences all over the country again this year.  This is "Feel Good Music" at its very finest ... and, if you haven't seen this show yet, you owe it to yourself to grab tickets next year.
kk
Kent Kotal
Forgotten Hits 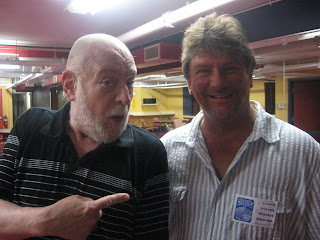