The Happy Together Again Tour, 2011: The Last Word

After a GREAT Summer Season of non-stop hit music from the '60's, The Happy Together Tour has wrapped things up until next year.  (All of this year's participants are still doing solo shows ... and you can catch all of the details as to when and where on their individual web pages listed below.)

Meanwhile, we wanted to share a few last words from some of these artists as a way of thanking all of the thousands and thousands and THOUSANDS of fans who came out to see the show this year.
(Special thanks to "the two Marks" who dropped us a line in this regard!)

And, just in case you missed it, scroll back to Tuesday, August 30th, to see our official review of the show!


Well, the Happy Together circus tent has been packed away for the season. What a fun run we had this year! Playing again with all the guys I've worked with over the years is kind of like that class reunion where the faces may change a little but the personalities persevere.

I sincerely appreciate the enthusiastic responses you gave us as we rolled across the country. And from the personal comments in the emails many of you have sent, it appears we all had a great time.
(And I'm glad you liked my psychedelic shoes, too!)

Thanks very, very much for being part of my life, and see you down the road.


Special thanks to you for your coverage of our summer tour "Happy Together 2011."

It is always great when you like what we have put together this year and we do appreciate it.

It is even better that you begin your coverage even before we play our first notes from the stage.

Our successful summer must be in part created by you and the other writers and DJs who spend the time talking to us about the show and letting people know it is happening.

Without you it would not have had the impact it had this summer.

This was one of the most enjoyable summer's I have ever spent. The principle artists all joined in with the philosophy necessary to create a show that runs seamlessly and effortlessly as well. The artists all got along and the loss of Rob Grill at the beginning of the tour brought us all together.

The way that The Grassroots handled themselves was nothing less then class personified and they deserve whatever success awaits this next incarnation as a band.  Their love of the spirit and the songs is evident in the way they played that show every night.

The Buckinghams are the best friends any tour could have.  They know what they bring to the show as the kick-off to the first act and they set the tone for the show for the rest of the night.

The Grassroots' songs and the performance of Mark and Dusty made you proud to be on the show with them.  Every night they received a standing ovation ... every night ... and they deserved it.

The Association have the hit songs that reflect the best part of the 1960's and the audience loved them and they are consummate professionals in every way.

Mark Lindsay has been with the show for over a year and we know he will always be a fan favorite.  His energy is habit forming and he is a hard act to follow.

Howard and I loved being involved with this show.  We would be remiss to not thank Baron, Raymond, Earl, Warren, Ron, Joe, Jason and Brian.  These are the crew who made the show run so smooth.

We all loved doing the show and we all loved the way the audience responded every night.  It made the show worth doing every night.  We hope we can do it again next summer and I know you will be there to help the fans to get a intimate and insightful overview of what it is to be a part of the great music from the 1960's.

Thank You
Mark Volman
The Turtles

Catch all the latest news on your favorite Happy Together Again artists here: 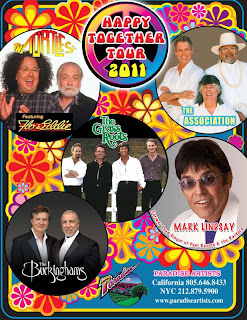 
We saw the Happy Together Tour's last stop, at the Minnesota State Fair. I think your assessment  / review  for the Chicago show could be applied to the show we saw last night.


We really enjoyed it, but had the same quibbles that you did.


The Association did pretty well. "Everything That Touches You" was the highlight.
Mark Lindsay was a gas. Man, what a voice! From the soft caress of  the verses of "Arizona", to the


pre-punk sneer of "Good Thing" and "Hungry", we were blown away by his voice and energy.


The Turtles were brilliant. Excellent energy and vocals. Kudos to the backing band for not being afraid to rock out! The backing bands on the PBS fundraiser "oldies act"  concerts are usually very stilted. Not these guys ... and their added harmonies really thickened the vocal blend ,making everything sound more "like the record".

Kent,
That is a well written review of the Happy Together Tour!


OK, I can't just stop there ...
From my viewpoint, the live concerts of these and many other performers from my "formative years" have just gotten better with age!  Proof to me that they are like fine wines.  Mark Lindsay, and his voice, over the past 10 years, has increased in dynamics and showmanship that has sent me back to digging out my Where The Action Is tapes and added that dimension to my teaching.  Carl and Nick never disappoint my audiences and The Turtles have left us breathless with laughter on several occasions, while we still try to sing along with them.
I pause with reflection on The Grass Roots.  I KNOW Rob hand picked them.  I KNOW he wants his music to go on, but Robert Frank ... as much as I love you I have to disagree that they can BE The Grass Roots without you.  As a tribute band they would be tops!  This was my first year of showing tapes of The Grass Roots with Rob singing, and then sending my young learners to see the concerts without him there.  Their response:  Where's Rob?  This is not The Grass Roots.
Remember that I have students who fell silent on viewing The Beatles taping Let It Be.  When one of them commented on their silence, another said, "Well this IS a somber moment. The Beatles just broke up."  Wow, the power of music to have the ability to make you FEEL something you are too young to know first hand.
Shelley J. Sweet-Tufano

I caught the Happy Together show at its other Chicago area appearance in Waukegan and, for the most part, I agree with all that you've written.  (It's especially nice to hear from the artists themselves on your web page, too!)
The Buckinghams make for the PERFECT opening act -- they had just enough hits to really get the crowd going -- and they add a real touch of class to the whole proceedings, even if it does come of as just a bit "Vegas-y" from time to time.
I have mixed emotions about the Grass Roots.  Sure, we love these songs -- and you're right, they absolutely deserve to be kept alive in whatever fashion makes the most sense -- but I really don't think they should call themselves the Grass Roots anymore -- maybe the 'Tribute To' is the best idea.
I enjoyed the Association. Their harmonies were pretty good the night we saw them -- and I like their story-telling. It's tough to pull off those kind of vocal gymnastics every night -- so you're going to hear a bum note now and then -- but overall I found them to be very entertaining.
As for Mark Lindsay, this guy sounds as good as he ever did in the '60's -- he's still got all of his vocal chops and makes all the right moves on stage -- he was absolutely the highlight of the show for me and I'll go see him again at one of his solo shows to catch some of the songs we missed on this tour due to his shortened set.
The Turtles are the glue that holds the whole thing together and makes the whole thing work -- I really can't think of any other artist from this era who could pull together a line-up like this year after year after year and still draw sell-out crowds across the country wherever their show plays.  Their classic hit 'Happy Together' is the perfect theme for the good vibrations that this show induces.
A great night of entertainment -- and I don't think we even have to say '60's music -- it was simply a great night of MUSIC from start to finish.
Bob Webster
Arlington Heights, IL
I couldn't agree more.  As for The Bucks, don't dismiss them TOO easily ... these guys had FIVE National Top Ten Hits in a 14 month period ... you're not going to find too many artists around who can make THAT claim!  (I do get the "Vegas-y" comment ... but I agree that they make for the perfect opening act for a show like this ... they set the tone and the mood for the rest of the night ... and they're very good at it. And Howard Kaylan told me backstage after the show that The Buckinghams are the PERFECT opening act for The Happy Together Tour ... which echoes BOTH of our sentiments exactly!!!)
It'll be interesting to see what The Grass Roots do from here.  (If I'm not mistaken, they've still got a few shows lined up with The Buckinghams before the year is over.)  How about "The Grass Roots: The Next Generation"???  There is no denying their love and appreciation of this music and, as hand-chosen by Rob Grill himself, they deserve the right to do so ... but I don't think the conflict over the rights to the name are going to go away.  As for The Association, I have MUCH admiration for these guys ... they were certainly amongst my favorites back in the day, putting out INCREDIBLE music with each new release ... but they also have to understand that by choosing to continue to represent their legacy on stage, they need to BRING IT every single night.  (It's a bit of a self-imposed curse:  they set the bar SO high for themselves and it's those trademark harmonies that the fans want to hear ... now they've got to deliver, even if it means supplementing their sound with some top-notch background voices.)  Mark Lindsay and The Turtles ... heck, I'll go see them EVERY time they come to town ... two of the top entertainers of this era, even 40-something years on.  Both artists put on incredible shows, night after night after night.
So yes, without question, A GREAT NIGHT OF MUSIC FROM START TO FINISH!!!  (kk)


Here are two more of MY favorites from last weekend's show: